A few weeks ago I showed off a custom card I created for Sean Conroy. He's the pitcher who made history earlier this year by becoming the first openly gay active professional baseball player. I thought it was a cool story so I created the card as my own little tribute. After I tweeted about it, his team, the Sonoma Stompers, were nice enough to retweet it. A week or so later, I got an email from Sean's mom. She thanked me for doing it and asked if I'd be ok with them including it in the photo gallery of the website seanconroybaseball.com. Of course I said I'd be honored. While I was in touch with her, I mentioned I was hoping to give Sean a few copies of the card (and hopefully get one or two signed and returned). His mom kindly facilitated this and I mailed several of them off on 10/5 to New York State. Just 8 days later, my return SASE showed up. 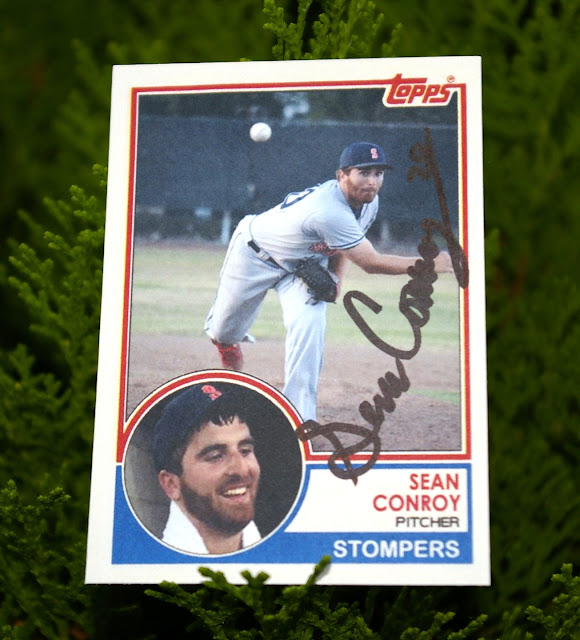 Nice! I'm very grateful to Mr. Conroy (and his awesome mother) for this! He actually signed 3 out of the bunch I gave them, so I've got a couple extras. Very nice of him.

This is the first custom I've ever gotten signed through the mail, though I did make some customs a couple months ago that I got signed in person. Those were more like "photo cards" that I had printed out at the photo kiosk at the grocery store. For this batch of Sean Conroy cards, I printed them myself on matte photo paper. Like I mentioned the other day, I've caught the hardcopy customs bug and continue to create cards and am still experimenting with printing them.. trying different types of paper and techniques. I even made a back for this one: 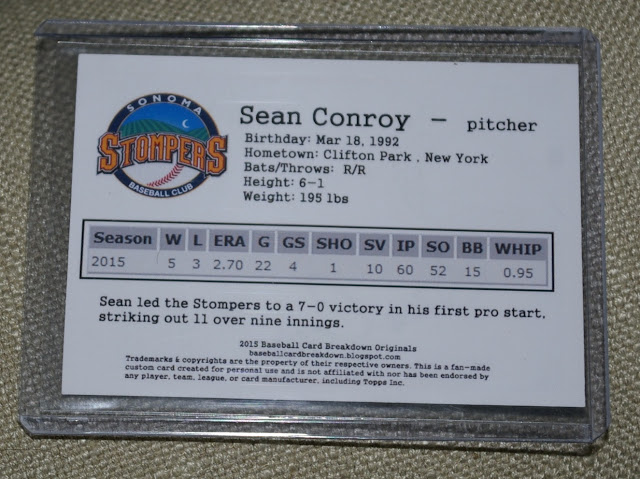 Thank you again, Mr. Conroy, for signing for me. Best of luck with your career!
Posted by defgav at 3:35 PM