You know the deal.. I pick up an old hobby box or blaster every once in a while (usually something cheap) so I have packs on hand to rip on days when I otherwise don't get any cards. A day without any new cards is liable to cause me to spiral into a deep and violent depression. Ok, maybe it's not that bad, but I've found it comforting to have packs around to prevent cardless days.

The box I most recently got through was 2003 Bowman Baseball. It's a reasonably cheap product these days, as with most Bowman sets of the era, full of never-was minor leaguers among an occasional guy who went on to a decent career, plus the expected major league stars here and there. That year's product promised two hits per box.. chances are they'd be relics, but you might get lucky and pull an auto.

Let's start right off with the best card I pulled (don't want to bury the lead in this post or it'd probably not even break a dozen page views). 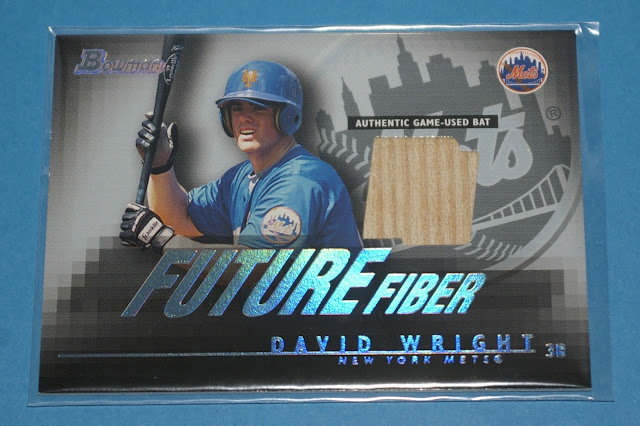 This David Wright "Future Fiber" jersey bat relic was definitely a nice hit for me. (Did somebody say "Fiber"? Obligatory plug for my band. New mp3 uploaded every Friday.) It doesn't "pay for the box" or anything, but seeing as most of the players on the relic checklist are "who?" career minor leaguers, to pull a big name like this was beating the odds.

By the way, congrats to the Mets on advancing. When the series began, I didn't think I had a favorite, but as the games progressed, I definitely found myself rooting against the Dodgers (even if the sad owl picture Night Owl posted on Twitter after the last out was heartbreaking). From here on out my rooting interests are decidedly NL over AL. The Royals were a great story last year, now it feels like they've outstayed their welcome. And screw the Blue Jays and their fans who throw beer on babies over a correct call that went against them. Also dick move leaving Mark Buehrle off the postseason roster. But the only team in the postseason this year I really hated was the Cardinals, and they lost so everything else is just gravy. 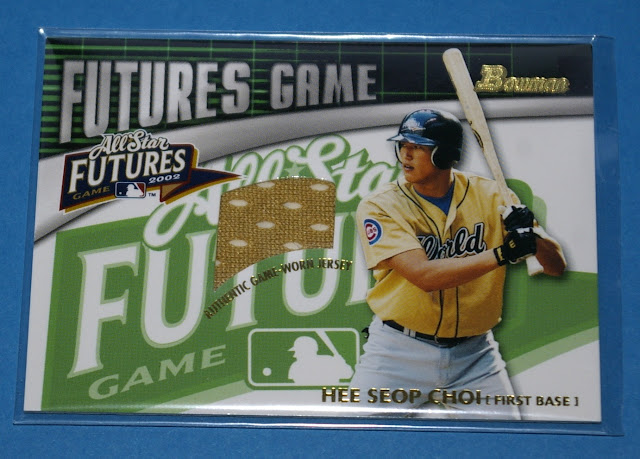 My second hit wasn't quite as impressive as the Wright bat, but could be worse. I especially like the fact you don't often see baseball jersey swatches in that color (or with the little breather holes like that). Anybody want it in a trade? Hee-Seop Choi hit 15 major league home runs in both 2004 and 2005, but after a down year in 2006, returned to his native Korea to mixed success where he's apparently still active. His best year in the KBO was 2009 when he hit .308 with 33 HR and 100 RBI. 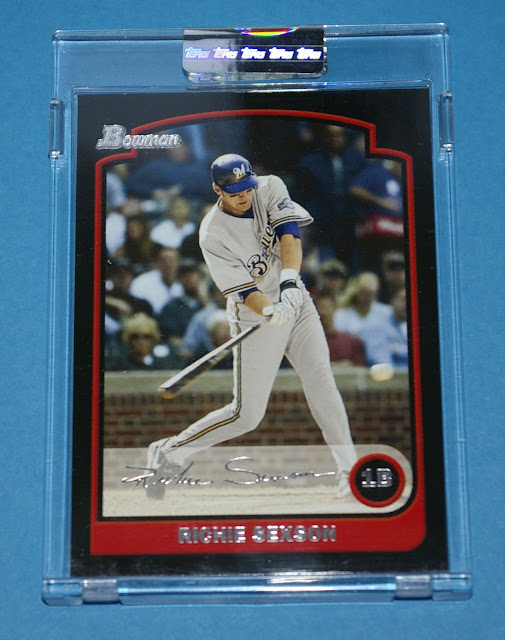 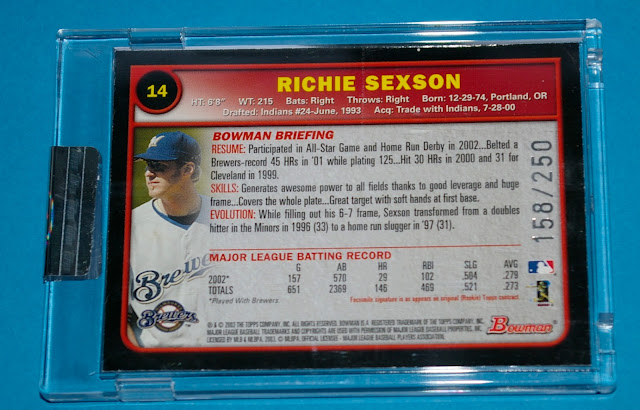 Seems each box comes with one "uncirculated" encased card. The bad news is I pulled a player I don't care about and isn't worth much today. But the good news is one of my most frequent trading partners is a Brewers collector, so this will find a home with Tony L. before too long. 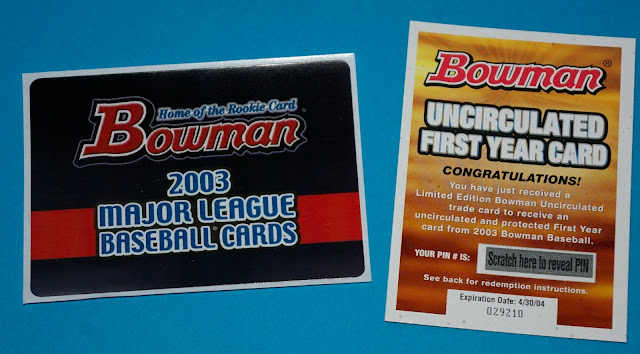 Before we get to the monotonous base cards, here are a couple more insert-type things. I assume the sticker was meant to be a handy label for collectors who actually put the set together, with the sticker going on the end of the box or binder for easy identification. That was thoughtful.. too bad that practice apparently didn't catch on with card companies. And cool that I pulled a redemption for an uncirculated first year card.. but of course it expired over a decade ago. :( 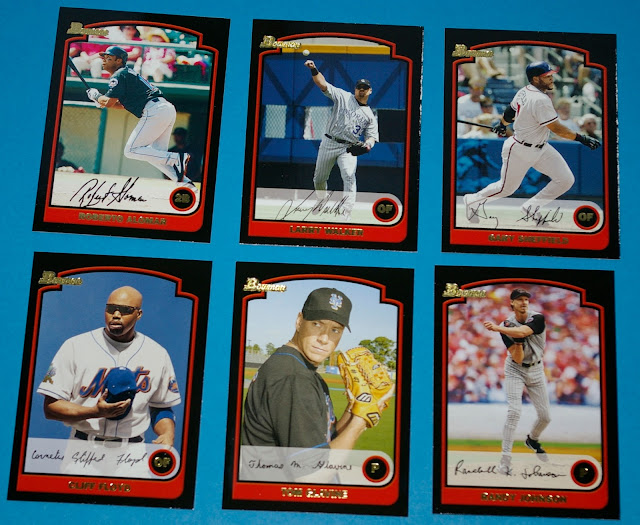 Here're some dudes I kinda collect. The black borders on these cards occasionally showed minor damage from sticking together or whatnot. The right edges of the Larry Walker and the Gary Sheffield-- that's not glare from the flash, it's paper loss. Like with pulling expired redemptions, it's a common risk when ripping old packs. Thankfully there wasn't anything too heartbreaking in there, such as an otherwise great pull that took damage. Most of the cards were fine, and nothing was so bad to where I felt obligated to throw it away. But yeah, you'll notice plenty of white specks in the black borders if you look closely. 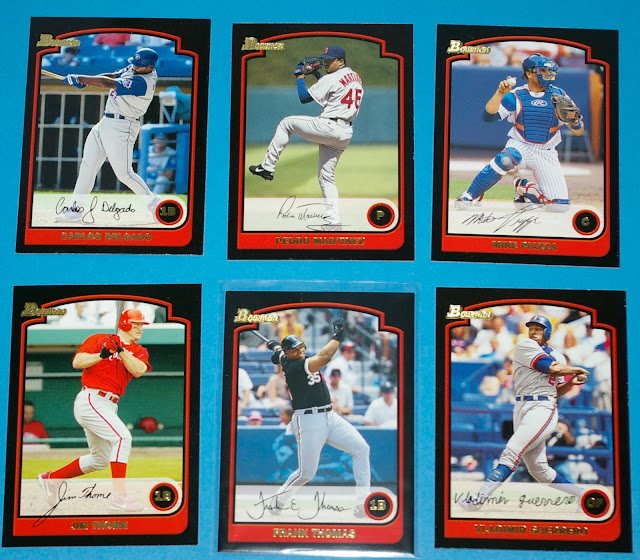 More PC guys of mine. Sorry if the foil names aren't too easy to read, but these players should all be obvious to you guys on sight. 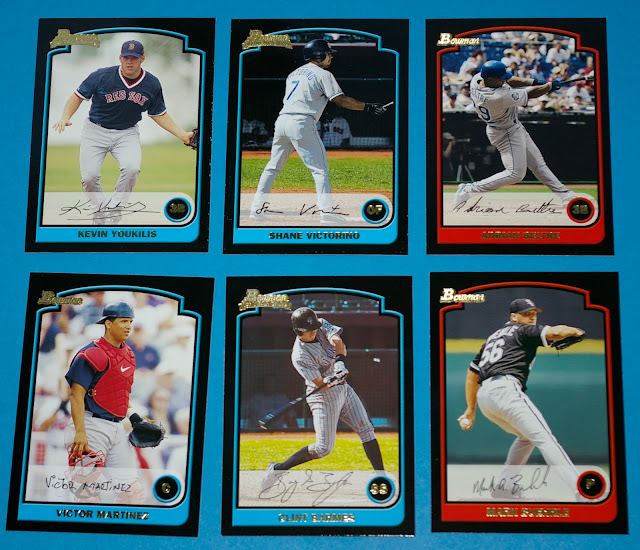 More notable cards, including RCs of Youkilis and Victorino. With the exception of the 2 hits, the cards all have the same drab design, with prospects having a blue inner border and veterans red. Even the 1-per-pack parallel gold signature cards (which we'll see in a moment) look nearly identical except they're thicker and the facsimile signature is in gold (which is not too noticeable, really). 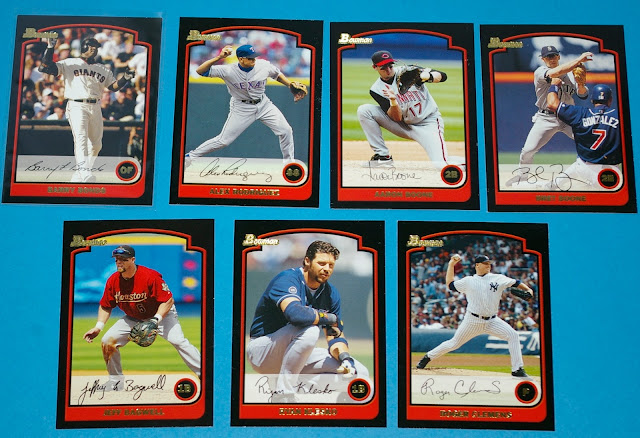 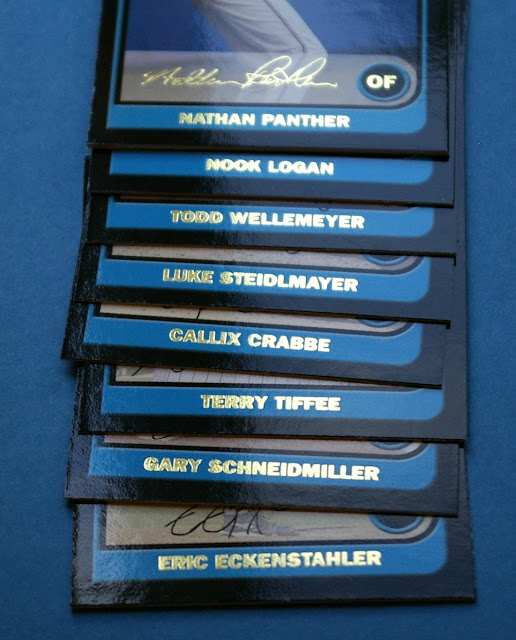 A fun game to play when ripping Bowman cards is "Find the Zaniest Name" with all the guys you've never heard of. These are all strong contenders. If I didn't know any better, I'd think Bowman was just making this shit up. Nathan Panther? Nook Logan? Terry Tiffee? Obviously all fake names, right? :P 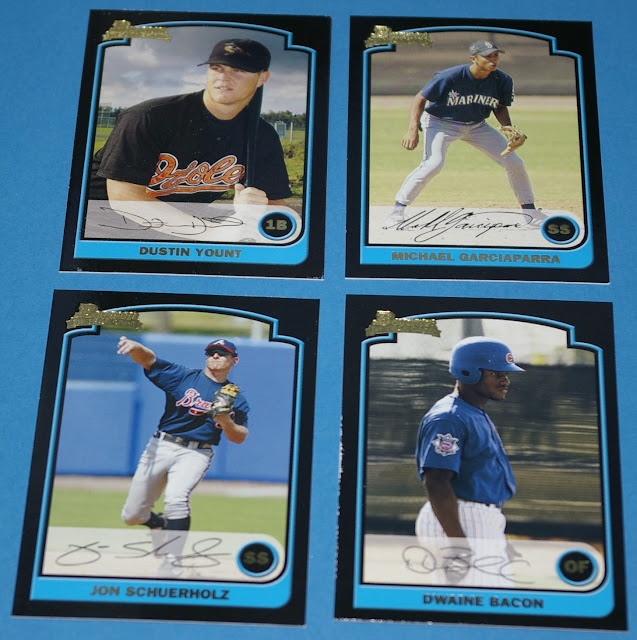 Here are some unfamous guys with famous last names.
Dustin Yount? Son of Robin.
Michael Garciaparra? Brother of Nomar.
Jon Schuerholz? Son of Braves GM at the time, John Schuerholz.
Dwaine Bacon? Great-grandson of Sir Benjamin F. Bacon, inventor of bacon. (ok, I made this one up.)

I thought it was funny on the back of the Jon Schuerholz card, it quoted the scouting director as saying, "We would have signed him even if his name was Smith or Jones." Yeah right, maybe if he was the son of Lonnie Smith or Chipper Jones! 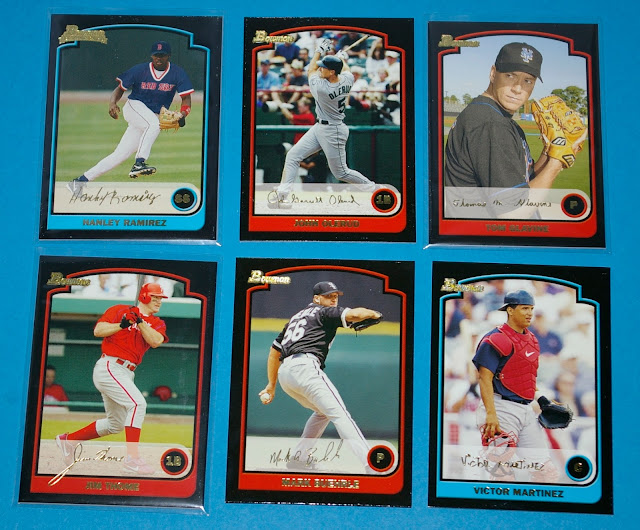 Let's close it out today with highlights of the aforementioned 1-per-pack gold signature parallels. You probably can't even really tell from the photo that these are any different than the base versions. Probably would have been more interesting if the border was turned gold (brown) like most other years of Bowman did during that era. But oh well. If Hanley can rebound from his down year, that rookie card parallel could possibly be a decent card.

Speaking of the Red Sox, I recently grabbed them in Nachos Grande's upcoming Final Group Break of the Year. He's got a nice mix of products lined up for it. I thought it'd be a good way for me to build up my Boston trade bait that's pretty thin these days, and plus I collect a few Sox players so they were the most appealing to me of the teams that were unclaimed. Hopefully I end up with some nice additions to my collection and my tradeables box. This'll be my 3rd group break with Chris, and they're always fun and he's a good, trustworthy dude. Check out the remaining teams and consider signing up!

So that's it for my box of 2003 Bowman. Not amazing, but a sweet relic hit plus several keepers to add to many of my PCs. Thanks for reading. My current "Cardless Day Breaks" box is Topps Gold Label.. which is a little more expensive and a lot more interesting. So look for that post probably in December.
Posted by defgav at 4:09 PM