The whole eTopps thing happened while I was out of the hobby, but it's my understanding it was sort of like a precursor to digital card apps like Bunt in that Topps let you buy cards from them that you could keep in online portfolios and treat like stocks. They weren't cheap, but at least they were real cards that you could cash out and have sent to you (though the shipping fee also wasn't cheap). Basically Topps' first attempt at making money off the idea of cards, without emphasis on physical distribution.

eTopps cards all seem to be encased, and most if not all are refractors. Many are serial numbered, and the unnumbered cards usually have an announced print run topping out at around 3000 or 4000. Because of the high shipping cost, a lot of people didn't bother to be mailed their cards, and I assume the majority of eTopps cards are stored in a Topps warehouse somewhere, mostly forgotten about. People still have access to the cards they bought, though the eTopps program is no longer actively putting out new cards or anything like that.

I recently picked up a few from an eBay seller (eTopps from eBay? eGad!), so let's take a look at them. 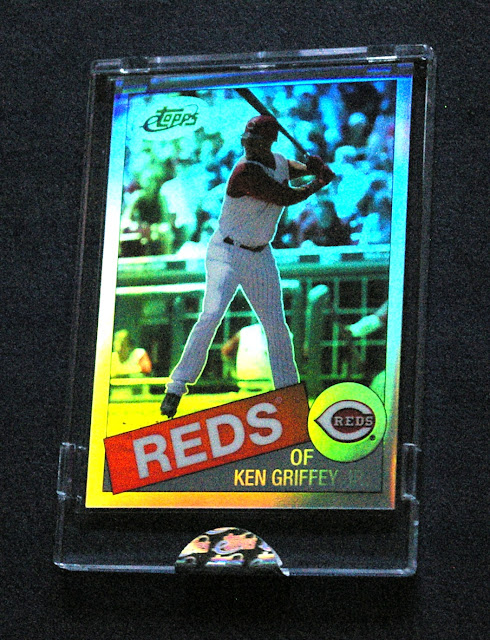 I think this is the same Griffey card that Junior Junkie teased last year but hasn't gotten around to properly featuring on his blog yet. Junior on a 1985 Topps design, a refractor no less, just seemed really cool so I eventually had to track down one for myself. 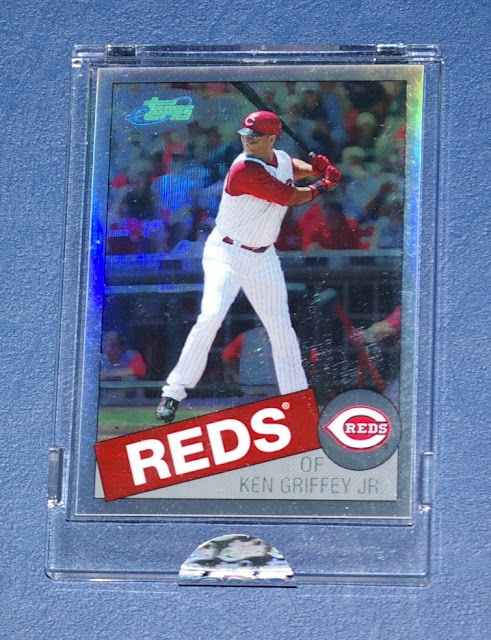 Here's a less rainbow-drenched picture of it. 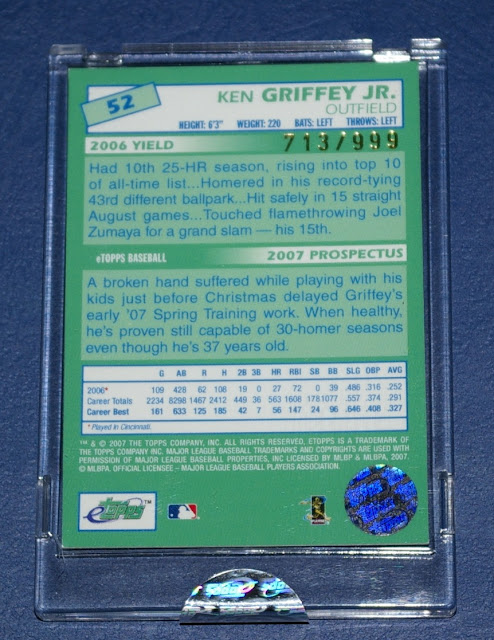 Numbered 713/999. With this card, I almost feel like I'm about ready to stick a fork in my Griffey PC and call it good. A glaring hole for me is his 89 UD rookie, but once I snag one of those, I'll file him away in my Hundred Card Club, thereby giving me an excuse to stop accumulating his cards. 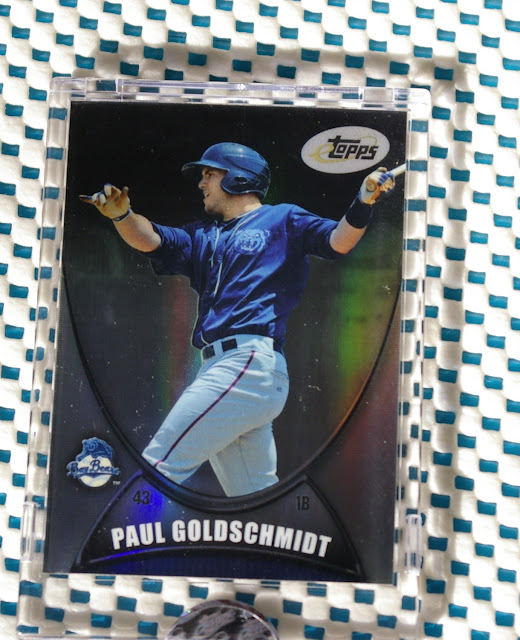 Next up is Paul Goldschmidt on a minor league card. I love how his Mobile Baybears uniform could pass for a Padres uniform if I squint my eyes. ...[wistful sigh].. Goldy on the Pads.. that'd be sweet. 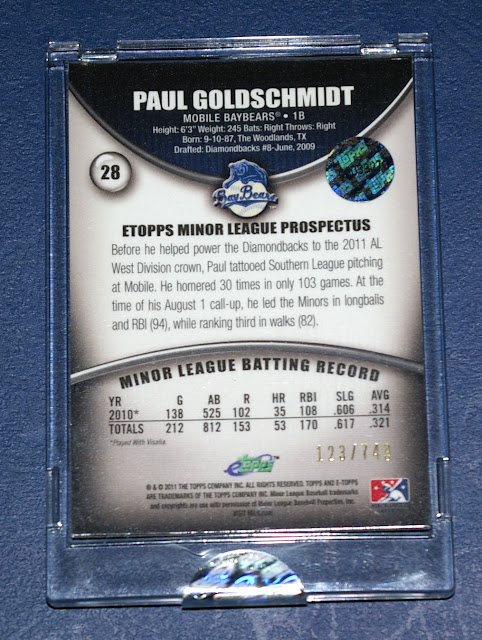 Numbered 123/743. Oh look, it's an error card (The Diamondbacks aren't in the AL, dummy!) I miss the days when card companies would actually fix errors. When was the last time a "corrected" card was actually put out? 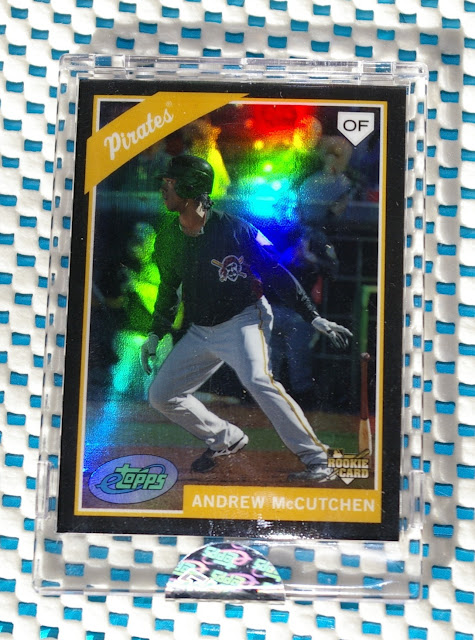 Next is Andrew McCutchen. This is a pretty sweet RC and easily the top card of my modest McCutchen McCollection now. 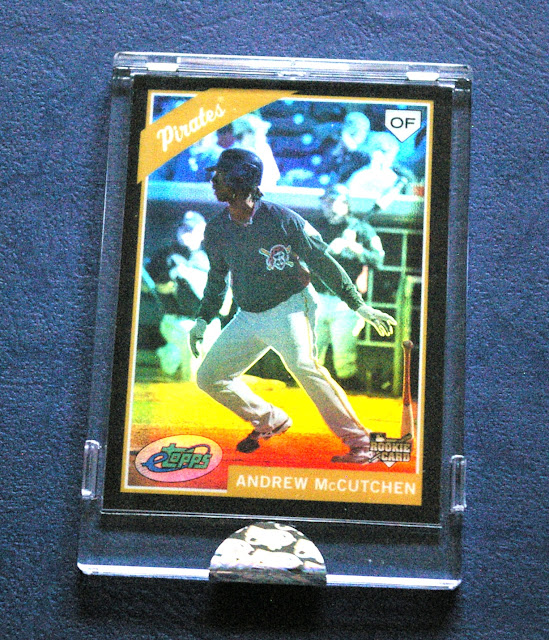 The design seems to be somewhat of a "modern reimagining" of 1966 Topps. 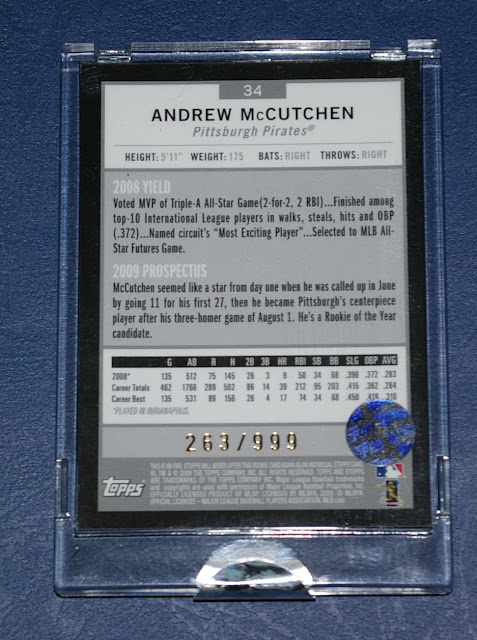 Numbered 263/999. Bittersweet to see the Pirates fall to the Cubs in the NL Wild Card game. I like both teams. The postseason for me this year isn't really rooting for a certain team.. only rooting against the fucking Cardinals. As long as St. Louis doesn't win I'll be happy. I realize I'm jinxing it saying this. You're welcome, Cardinals fans. 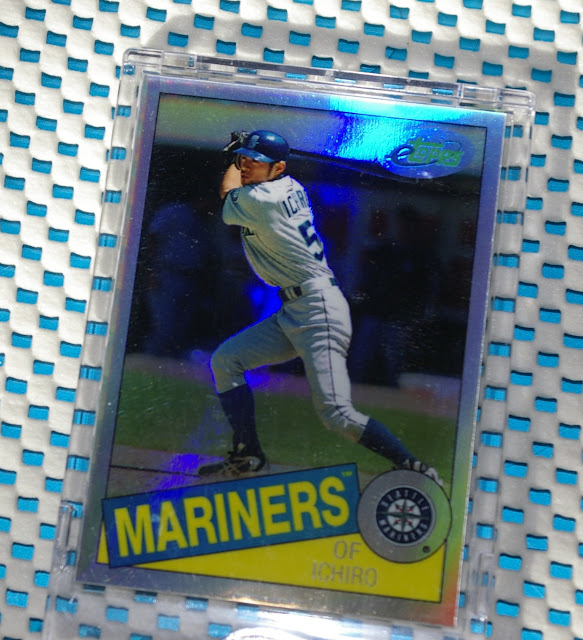 The final card in my recent eBay buy was this Ichiro. Like with the Griffey, there's something about a 1985 Topps refractor that really appeals to me, so I had to throw this one in my cart too. 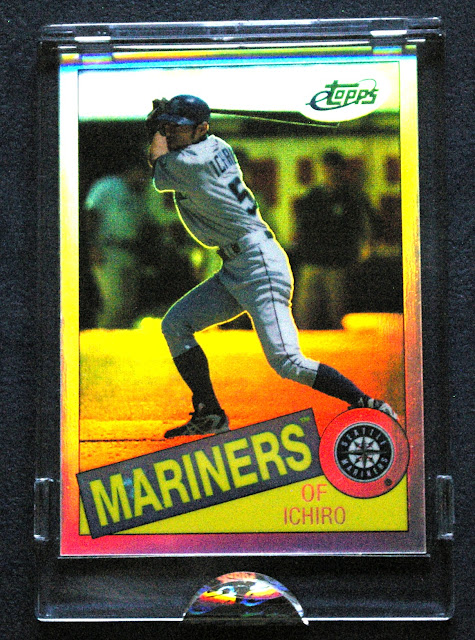 I was happy to hear he recently re-signed for 2016. Ichiro is a guy I never really collected much. (Can't collect everybody! Plus I always hated the reluctance to use his last name. Seems like such a diva move for an otherwise humble guy.) But now that he's approaching 3000 MLB hits, I feel myself relenting and may have to start a little PC for him. (Yes, feel free to send me your unwanted Ichiro cards!) This card is a pretty good start. 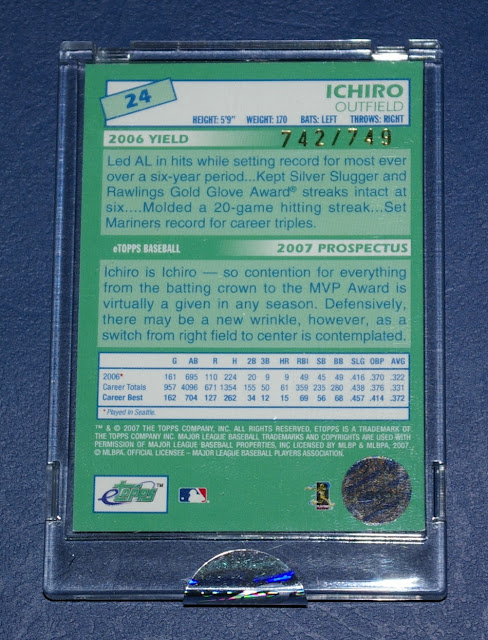 Warning for epileptics out there, here's a strobing picture of this card in action for the heck of it:

So there are some new additions for me.

I previously had one eTopps card in my collection, and I posted about it back during the early days of this blog... 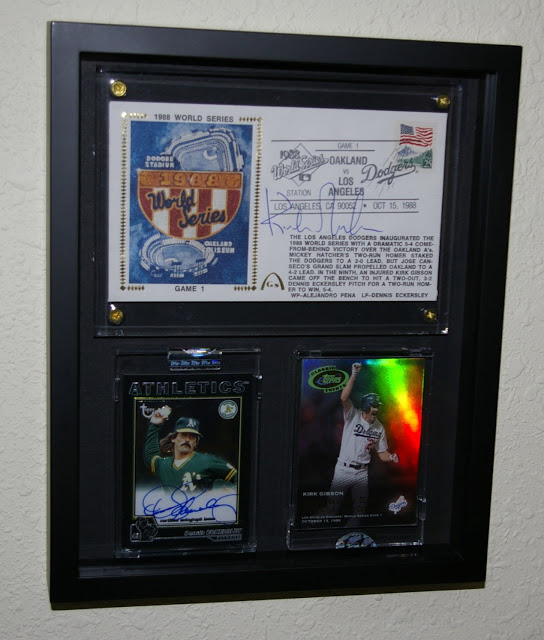 It's the Kirk Gibson card in this neat shadow box display. I still have this thing, though it hasn't been displayed since I moved nearly two years ago, instead just buried under some packaging supplies. Anybody want to make me an offer for it (trade or sell)? If the Dodgers advance in the playoffs, maybe I should pop it on eBay. The thought of mailing glass scares me, though. I'd have to package the hell out of it to be reasonably confident it wouldn't break in shipping.

It's a pretty cool piece. If I can't find anybody to take it off my hands, I really should get around to hanging it up. I don't hate the Dodgers as much as most Padres fans seem to. Honestly I'd be fine with them winning it all this year, though they wouldn't be my first choice. At this point, I guess my top pick would be the Cubs. It'd be cool if the Back to the Future Part 2 prophecy came true (though that is not a good movie, apart from the hoverboard stuff. I rewatched the trilogy recently. The first one holds up, and the third one is worth watching, but that middle one.. blah.) Plus my mom's side of the family is from Chicago, so I've got some roots there.

But again, as long as the fucking Cardinals don't win the World Series I'll be happy.