Today's the last day at work for many of the people I work with. The company's gone from around 120 people in the Portland location a few months ago to just about 20 left after today. I'll be a part of the skeleton crew sticking around, but I'm not sure for how long.. could be a week or two, could be a month or two. My goal would be to stretch into 2016 because that would look better on a résumé, getting that "extra year" on there, but I'll be surprised if they keep me around that long.

Most of the workforce here is older Asian ladies, so it's not like we've got a ton in common outside of work, though I've still become "work friends" with several people here I'll miss.

So on that theme of working together with people for a while, let's showcase autos I've acquired of Atlanta's Big Three. These guys made the Braves a perennial pennant winner for several years. As a kid in the early 90s, the Braves were probably my 2nd favorite team, in large part due to the availability of watching their games on TBS. Dave Justice might have been my first "hyped up rookie" experience, and I remember being overjoyed the day I pulled his minor league card from a pack of 1990 CMC. I've still got an old Braves hat I've had for over 20 years that I still wear on a regular basis. I'm amazed it's held up so long.

Anyways, yeah, the Braves are cool (were?) and I'm happy to bolster my collection with autographs of these 3 Hall of Famers. Let's take a closer look at the cards... 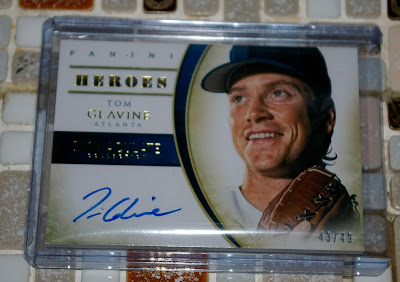 Here's the recent pickup that completed the trifecta for me. I love the Rockwellian portrait of Tom Glavine on this. The on-card signature is fine, though a little small. It's #'d /49. 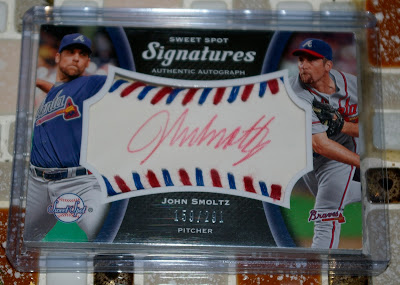 I picked up this John Smoltz auto a month or so back. These Sweet Spot "on ball hide" autographs are notorious for fading, but I think that's mostly when Sharpies are used; ballpoint pen seems to last ok. It's always refreshing to get an auto that's not in blue or black ink, so I'm digging the red. 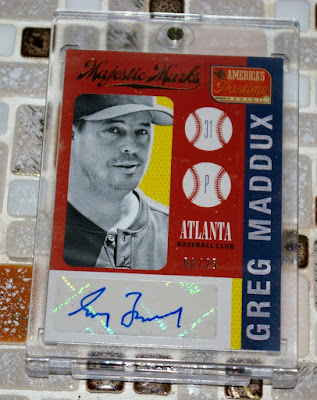 And of course Greg Maddux. I've had this card for a year or two and have shown it off on the blog a couple times before, but it's a nice one, so here it is again.


Since my company is moving, a ton of stuff in the building is available for sale. It's kinda like the workplace has become a giant yard sale, with the Buyer for the company being inundated today with requests to sell stuff. I actually bought the coffee table from the lobby for $5. My old coffee table is kinda beat up and we'll likely say goodbye to it. I mention it because it's the tile thing in the background of these pictures. Emotional, right!? Haha. Oh, and of course there's the fact that my company is moving to the outskirts of the Atlanta area (Norcross, GA).. so this post is all tied together.

Have a great weekend, everybody.
Posted by defgav at 3:07 PM