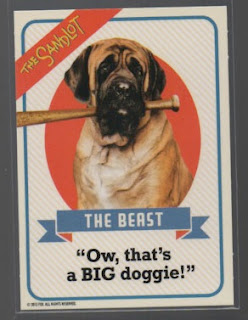 Seems like The Sandlot is a big favorite among my fellow cardbloggers. Somehow I missed it when it first came out back in the 90s, and I never got the chance to see it until renting it from Netflix two or three months ago. I liked it a lot, and recently took a curious look to see if any cards were put out in conjunction with the film. I found that in fact there were! (I've since found that Fuji posted about them back in February and I even commented on that post, though I had no recollection of the cards. Man, my memory sometimes! Oh well, I'm continuing with this post anyways.)

It's a little set of 10 cards that came packaged in the 20th Anniversary Edition Blu-Ray/DVD release that came out in 2013. I rarely buy DVDs anymore (and have never owned a Blu-Ray player), but was able to pick up the unopened set of cards alone pretty cheap on eBay. 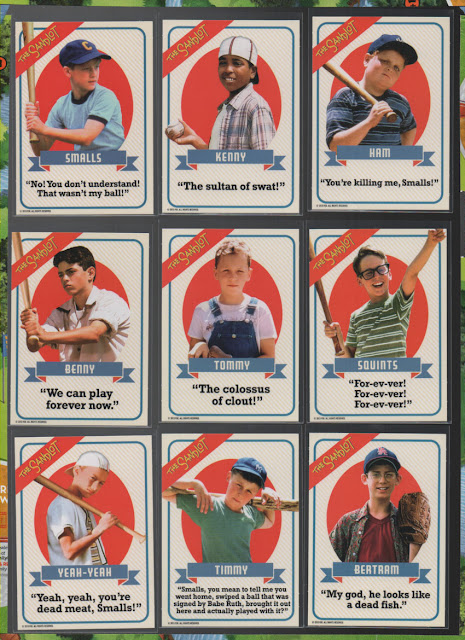 Nice simple design with the kids in the movie (plus the dog), each with a quote. Smalls, Benny, Squints, The Great Hambino.. the gang's all here. 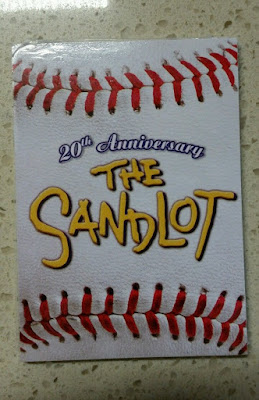 The backs are a bit phoned in, with all 10 cards having this same generic image from the cover of the 20th Anniversary release.

But yeah, if you're a card collector who loves that movie, these cards are pretty cool to add to your collection.

Since it turns out this post is just retreading old ground, I went ahead and created a custom 11th card for this set. 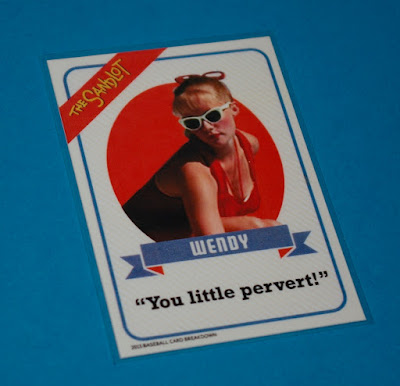 Now there's a card! Wendy Pfefferkorn, the lifeguard cutie. (If it looks familiar, it's probably because I teased it in the photo of my previous post.) Maybe I'm a sucker for a pretty face, but this might be my favorite custom I've made to date. (Let me clarify-- I am not dating this card.) After a couple tries, I got it really close to the original cards, nice & glossy, and the back is good. I think it could pass as legit if someone were casually flipping through the set.

While I was at it, I decided to bring the set up to an even dozen with one more custom... 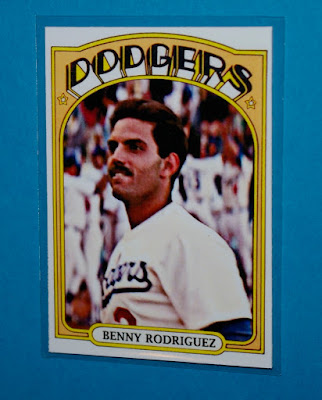 This 1972 Topps "grown-up" Benny Rodriguez card is probably the most challenging hardcopy custom I've made so far, simply because it's hard to fake vintage, as I've found out. It's one thing to photoshop up a vintage card-- this front image file didn't take long to whip up-- but to print out a physical version that looks and feels like it could realistically pass for a decades-old card, that's tricky. Sure, I could go the "Archives" route and just not worry about an authentic feel, but I like trying to get it as close to the real thing as I possibly can. I'm still working on it.. I wouldn't say this is my final product on this one. 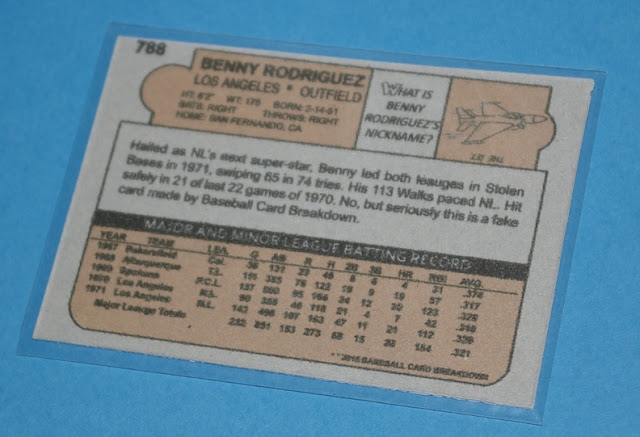 The back is the hardest part. Not only getting it to look right, but getting it to feel right. I don't know how counterfeiters do it! Very tough. I know it's hard to appreciate stuff like "card feel" over the internet, but I'm sure you guys all understand the tactile difference between a vintage card and a modern reprint. While this came out ok-- similar rough, grey cardboard to 72 Topps backs-- if you put it in a stack of real 72s, it would stick out like a sore thumb. I might have to give up my quest to make a passable vintage-feeling card. But I'll probably keep tinkering a little. This one is tough to read, even in hand, so as I said, this likely won't be my final draft.

I'm still somewhat of a newbie when it comes to making cards. Some of the skilled guys out there make their own authentic-looking refractors, superfractors, relics, and stuff like that. I've still got a long ways to go to be in the same league as them.


CONTEST UPDATE: Nice turnout for my 600th Post contest! Thanks for the strong response, guys! Still a few days to enter, so get on with it if you haven't yet. Let's set the deadline for the "pimp bonus" as the end of this weekend, and then we'll close the entry period probably sometime around Monday or Tuesday. Then we'll use the outcome from a World Series game to help randomly find a winner.

Another bonus entry opportunity! In the comments of this post, be the first to correctly identify a player I used as inspiration while coming up with the back of the Benny Rodriguez card above. Hint: There are two players: one was a rough guide for the batting record, and the other for some verbiage in the writeup, though I did liberally tweak both. Both players are included in the 1972 Topps set. Limit 1 guess per person, please.

I know my blog has been heavy on custom cards lately, but I assure you I've got plenty of real cards I'll be posting about soon enough. Card show tomorrow, in fact!
Posted by defgav at 3:54 PM