In the bottom of the 14th of Game 1, with a tie score, bases loaded and no outs, most of the baseball world was watching Royals vs. Mets, but to me it was Matthew Scott vs. Red Cardboard. With the running total of 22 hits in the game, the contest was Matt's to lose. A hit would give it to Red Cardboard, but a walk, sac fly, error, passed ball, wild pitch, HBP, etc. would seal it for Matt. Eric Hosmer came through with a sacrifice fly that sunk not only the Mets, but also Red Cardboard's chance at winning the contest.

While I'm a big fan of Red Cardboard and his blog, I was happy to see Matt of Bob Walk the Plank win since I was a winner of his most recent contest a couple months ago (post). So now we've essentially done a trade via contest winnings! I thought that was cool on a karmic level. And ironic that in my post that gave the contest lineup, the first card I showed off had a Pirates logo and I mentioned I had a cache of cards ready to send to Matt. If I had then simply randomized for a winner and Matt was #1, it would have looked very suspicious of funny business. But luckily I had no power over how many hits the Royals and Mets combined for, so I'm in the clear. That's a big reason I add that extra bit of randomization to my contests; Just want to make it very obvious it was truly random and nothing sneaky if, say, the winner is a guy I had a bunch of cards set aside for burning a hole in my "set aside for traders" box. Or like one of my early contests that Night Owl won. Because of course I would like it if Night Owl won, because if he wins your contest, you get a nice plug on the most popular card blog around when he eventually posts about his winnings.

But anyways, congratulations to Matt! So you say you want a Bob Walk custom? Sounds good.. any specific requests (photo, design), let me know. Obviously I assume you want him in a Pittsburg uniform, but let me know if you have anything else in mind, or just want me to surprise you with something. In either case, I'll whip it up for you and send it along with a bunch more Pirates soon. It won't be quite "jaybarkerfan war" magnitude, but it'll pack a good punch!


Now here are more pickups to show off from last weekend's card show. 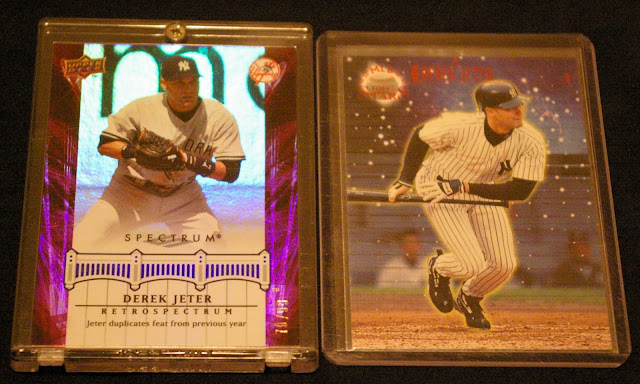 The dealer I buy most of my cards from always has plenty of Jeter in his bins, and I normally thumb right through them. But I'm a sucker for a serial numbered card, whether /99 or /9799, as with these specimens here. 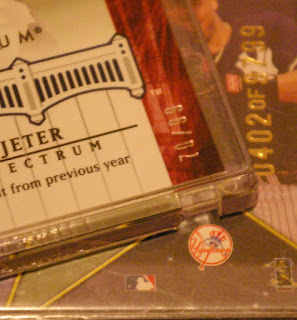 It's tempting to try flipping them to make a little profit, but they'll likely stay put in my tiny Jeter PC. 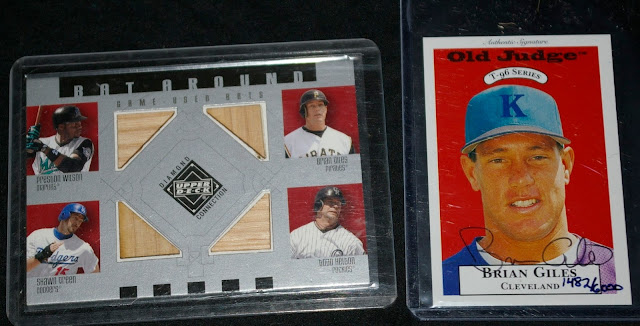 Hey, here's a guy both Matt and I collect, Brian Giles. Giles, of course, spent much of his career in Pittsburgh, so he's well-represented in Matt's collection. I collect him because he's from El Cajon and went to the same high school as me. If you missed my big Brian Giles story from a few months back, it's worth a read.
As for these cards, here we've got a nice quad bat relic also featuring Preston Wilson, Shawn Green, and Todd Helton... nice group of players.. I probably would have picked up this card even if it didn't have Giles on it. I already had that auto, I believe from a trade with Mark Hoyle, but for less than a buck, I couldn't resist picking up another one. Maybe someday I'll find another (non-team specific) Brian Giles collector and unload my dupes on them. Seeing as this is an Indians/Kinston card, I don't think Matt would have any interest. 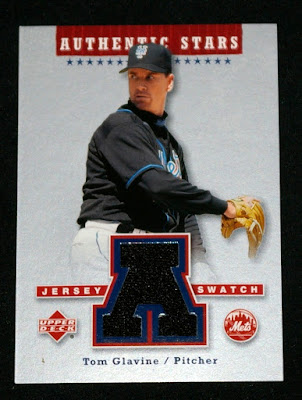 I was happy to come across this Tom Glavine relic. I just recently picked up a Glavine auto (haven't showed it off on the blog yet), so now with this jersey swatch, my PC is off to a good start. --or more like restart, as Glavine is a guy I kinda collected, then kinda stopped, then recently started again. 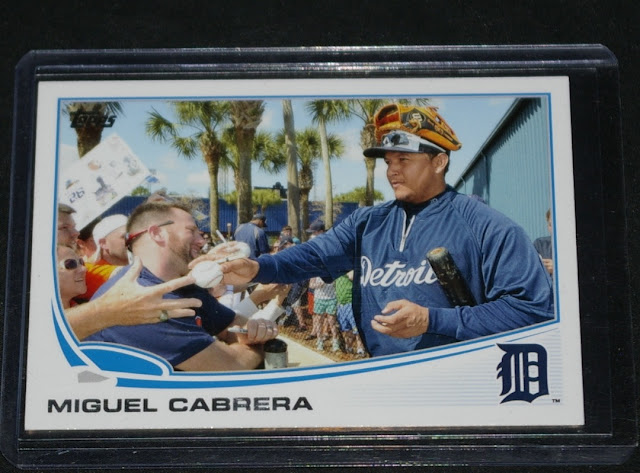 Lastly for today, this 2013 Miguel Cabrera photo variation SP was a good pickup for me. Looking at eBay, seems to be about a $10 card, so for under a buck, nice addition to my Miggy PC.


Ok, now I know I promised a "second chance" contest for anyone who pimped the contest, so let's bust that out.

There were 7 valiant souls who shouted about the contest to the vast expanse of the internet:
Bo
Jason T. Carter
Jon
Mark Aubrey
Stealing Home
the bowl cut kid
Tony L.

Here they are in random order. Let's say the winning number is the total number of runs scored in Game 2 of the 2015 World Series. 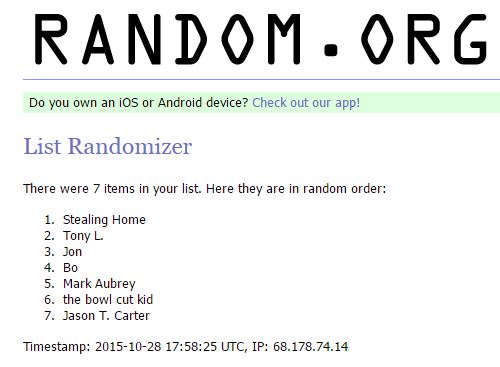 Again, the winning number is the combined runs in Game 2.
Anything over 7, we'll cycle back through the list. So 8 = Stealing Home, 9 = Tony L., etc.