Granted this one isn't as epic as my previous TTM return, but I'm still pretty happy with it.

Randy Jones was a bright spot on some crappy Padres teams of the mid 70s. His 1976 season in particular was pretty incredible, leading the NL in several pitching categories on his way to the Cy Young Award. The 300+ innings he threw that year took their toll on his arm, though, and he was never that dominant again. The Padres traded him to the Mets after the 1980 season, and he pitched a couple years for them, but his best days were behind him and he was released by New York after the 1982 season.

He has a 1983 Topps card as a Met that turned out to be a "final tribute" with complete career stats on the back. But a few months ago, I did a double take when I stumbled upon a couple old Topps photos featuring Randy as a Pirate. Looking into it, I discovered he signed with Pittsburg before the 1983 season, but ended up getting released in spring training and called it a career.

I figured the Pirates photos could be used to make a neat "card that never was" and then forgot about it for a while until last month when I was on a TTM requesting bender. Randy is known as a decent signer, so I whipped up a theoretical 1983 Topps Traded card for him to sign and mailed it off. I already have a couple certified autos of his on Padres cards, so I figured I'd go quirky with a "zero year" card. Exactly a month later, it arrived back at my place. 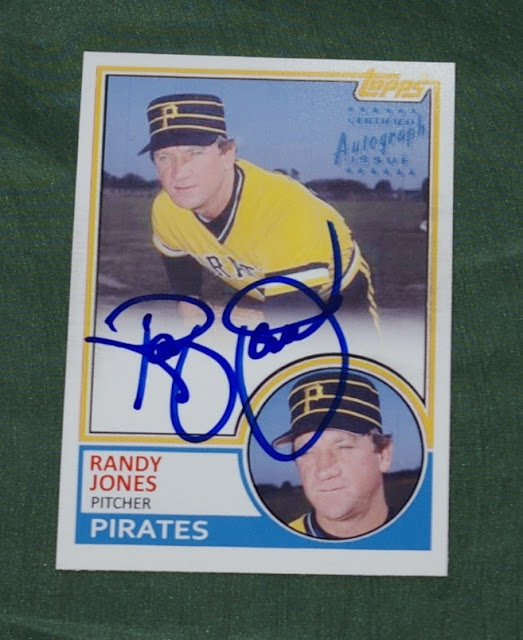 Pretty cool! Between this, the Goose TTM success from a couple weeks back, and the 1977 Dave Parker "Padres" card I made a while ago, I've got a nice little assortment of off-the-wall Pirates customs going.

(UPDATE: I've just noticed that his 1983 OPC card does in fact say "Now with Pirates" though the pictures are the same as the Topps version.) 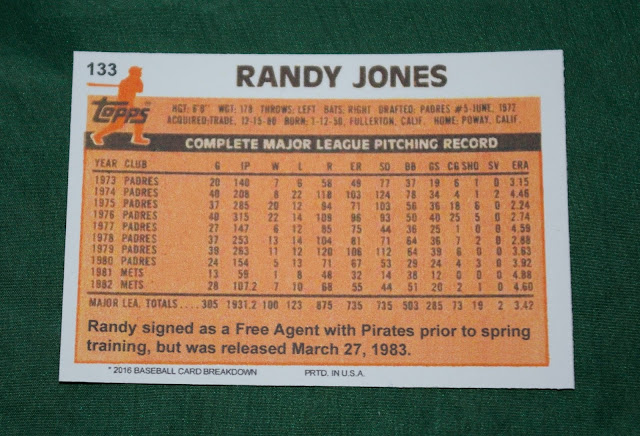 Big thanks to Mr. Jones for taking the time to sign for me! I remember seeing him at a spring training game in the early 90s when I was a kid, but I wasn't quick enough to get his autograph that day. So I guess there's some nice closure here to have him finally give me an autograph all these years later.

I think with this return, I've gotten back all the "safe bet" requests I sent out last month. There are still a couple "maybes" and a couple "shot in the dark" requests outstanding that will hopefully return eventually, but I won't be holding my breath. I'm also gearing up to send out a few requests to spring training in the next few days.

Anyhoo, thanks for stopping by.
Let's do a quick contest bonus entry question: In the comments below, be the first to name the other 4 Padres besides Randy Jones to have their number retired by the team. (Tim B. not eligible since he got the last one.)
Posted by defgav at 4:08 PM