It was a big weekend for me. I was at the card show for around 4 hours Saturday, which might be my personal record. My back and feet had had had enough. Popped home for some lunch and a quick post showing off my vintage pickups, then it was off to the Brian Posehn show that my wife won us tickets for. He's that big ogre monotone comedian. He's been in some of my favorite shows over the years, such as The Sarah Silverman Program, Mr. Show, and Mission Hill, so that was cool to see him. Very funny. Like with the last stand-up show we won tickets to, it was also a taping for a Comedy Central special. It's tentatively titled 25 x 2 and I'll be looking forward to checking it out once it airs. We were kind of in the back, though, so I don't think we got any camera time.

Oh, but my point was it was like a 45 minute wait standing in line.. which combined with the card show made for a big day for me standing. I'm getting too old for that shit, lol. Then Saturday night after some drinking, I crapped out a drunken Cubs-centric post and ended up going to bed after 1:30 in the morning. Then I woke up at like 7. Ouch. I even took a nap on Sunday.. first nap I've taken in quite a while.

Anyways, I've got a lot of posts in the pipeline (several nice trade packages came in last week), so let's crank through the rest of the highlights from my card show haul. 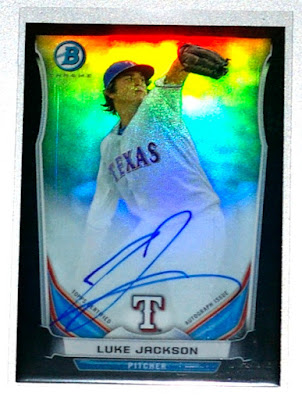 I picked up this /99 black refractor auto of Luke Jackson with Judson of My Cardboard Habit in mind. But silly me, I forgot Judson jettisoned his Jackson PC a while back. Oh well, guess I'll hang onto this and hope Luke gets back on track and develops into an ace. 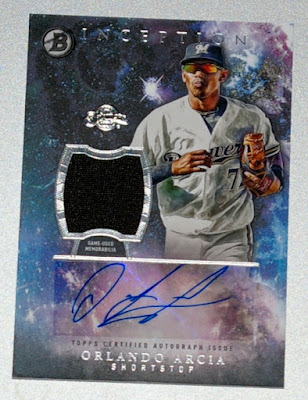 And I had Tony L. in mind when I came across this auto/relic of top Brewers prospect Orlando Arcia. 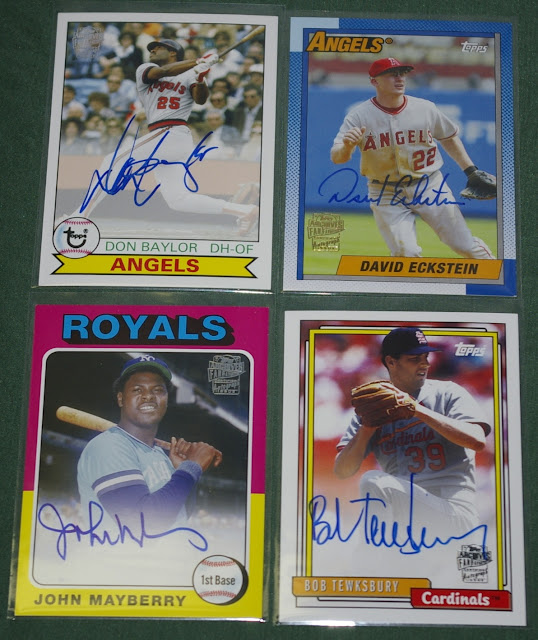 Cheap Archives autos! I already have the Eckstein and Tewksbury cards (both former Padres), but couldn't pass them up for less than a buck, so those are available for trade. The Baylor and Mayberry cards are pretty nice looking and am happy to throw them into the "misc autos" portion of my collection though I don't collect either guy. 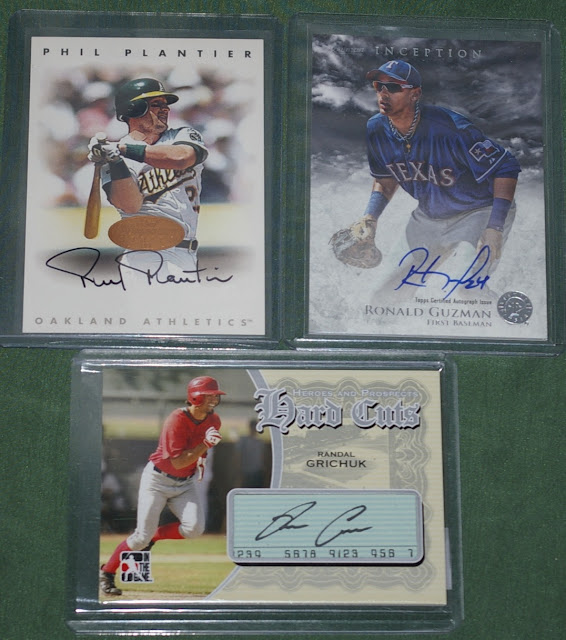 More cheap autos. I remember Phil Plantier from his days as a hot rookie on the Red Sox, then hanging on with the Padres for a while.. but had no recollection of his A's stint. I love this style of Leaf Signature autos (often use it for TTM customs) and will pick them up whenever I seem them for under a buck. Didn't Fuji complete the set recently? Maybe that'll be me someday. I don't really like when they changed the design for the second series with the names on the sides, though.
Ronald Guzman had a solid 2016 in AA, but struggled after getting promoted to AAA.
And as for the Randal Grichuk, I just thought it was a funny that it's a cut auto of what seems to be a canceled check.. like he's fucking Ty Cobb or Shoeless Joe. He's still very much alive and cranked 24 ding-dongs for the Cardinals this past season. 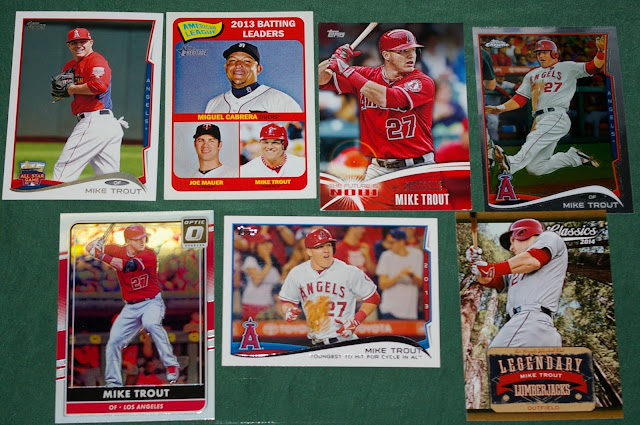 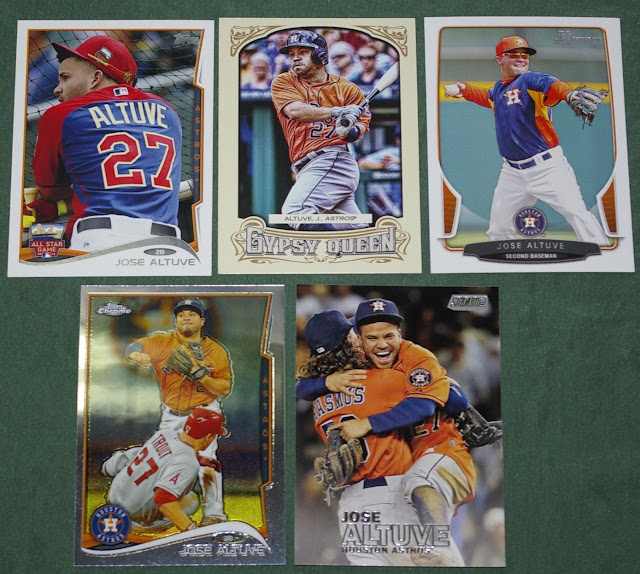 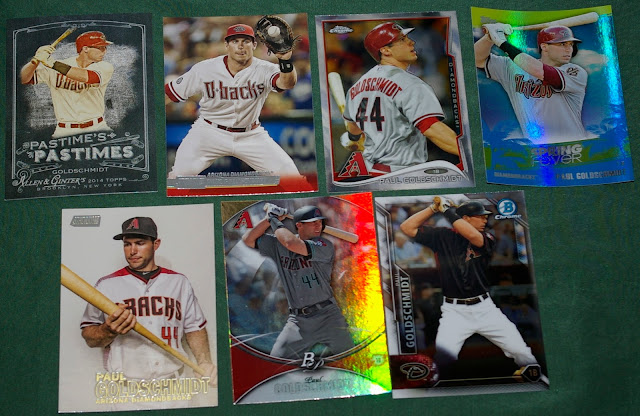 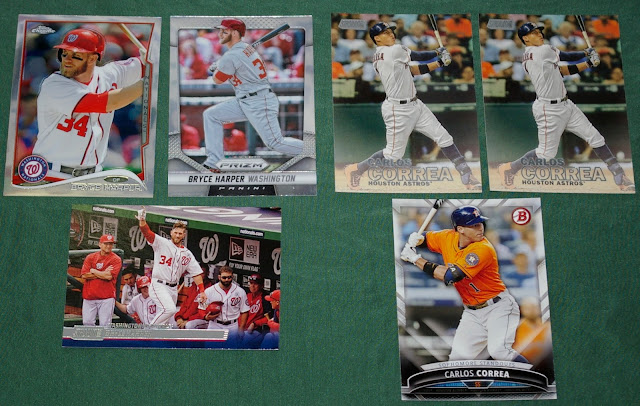 Bryce and Correa from the dimebox. Yes, I purposely grabbed a couple of the same Stadium Club card. Remember back when I pulled the Member's Only parallel? What a great day that was. Anyway, now I've got the base version too. The dupe is available for trade. Recent SC is always good for trade fodder since lots of guys work on the set, and rightfully so. 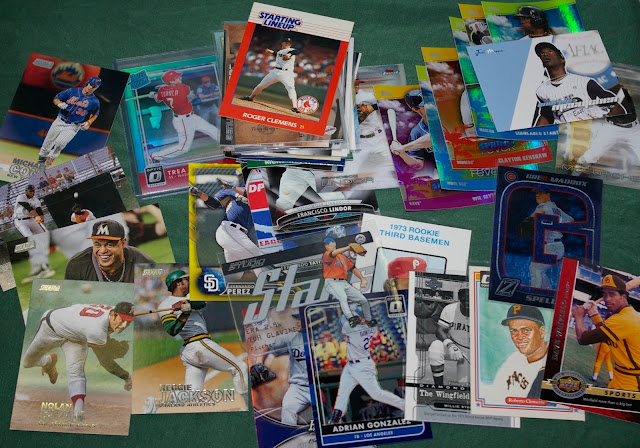 And some more dimebox pickups that I'm too lazy to delve into much here. Oh wait, the Trea Turner Rated Rookie parallel wasn't from the dimebox. 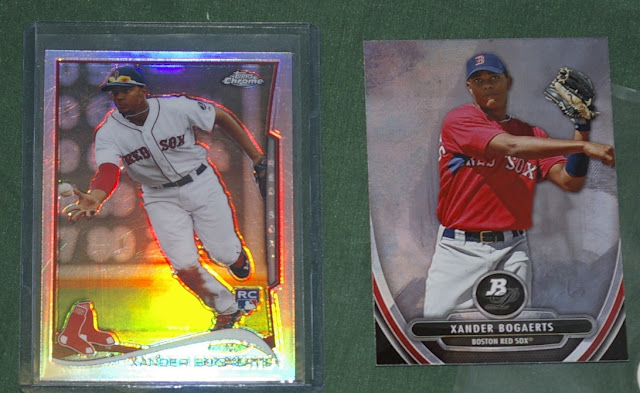 A couple shiny Xander cards. But wait, one holds a terrible secret.... 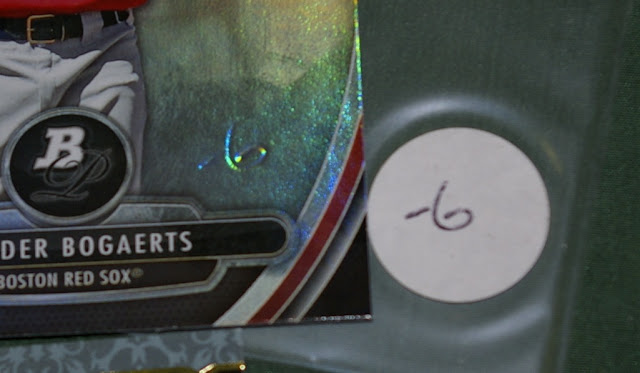 Didn't realize it till working on this post. Some dipshit card dealer ruined it. Dealer Bill recently bought out a guy, and much of his new inventory came from that buy. You guys-- never write with ballpoint pen on a penny sleeve with a card in it. Duh. Rookie mistake right there. And "-6"? So you'll give me $6 if I take this card off your hands? WTF? This card was in a 7 for $5 deal, so it didn't cost me that much. But still pisses me off. 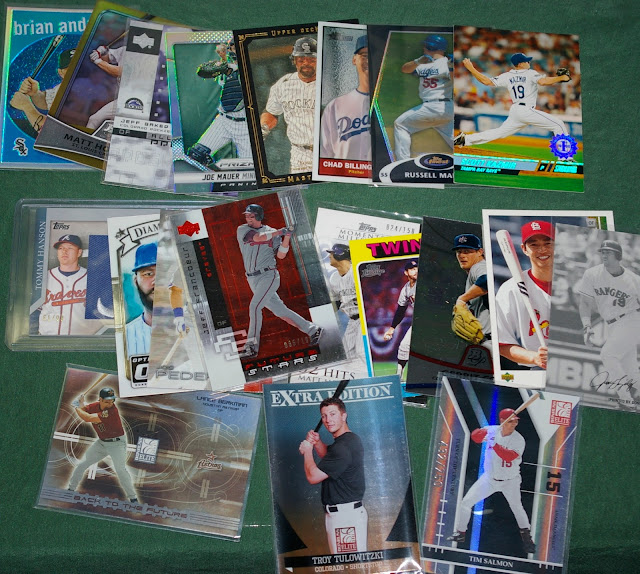 Some trade fodder including a couple #'d Braves.
The 89UD style card? That's So Taguchi. (Yep, spent 10¢ just so I could make that joke.)

So there you have it. Solid card show haul for me this month. Thanks for checking it out.
Posted by defgav at 9:29 PM