A vintage card show haul for the ages!

[Ok, maybe I'm overselling it a little. I didn't score any Mantles, Clementes, or the like. And nothing super old or mega rare. But just a killer deal on a bunch of cards from the 60s and 70s.]

This past weekend was a damn fine card show for me. First I made a beeline to my usual guy and picked out 20 cards from his 50¢ bins. Then I found a decent nickel box from another dealer and picked out a buck's worth. But this post will cover my third and final buy of the day.

I noticed a couple vintage discount bins and started digging. My eyes lit up when I saw a bunch of 65s. I then saw some 73s and knew I'd be camping out in front of these bins for a while. After a minute or two, I heard a familiar voice and realized the dealer was none other than my old "vintage guy".. the one who reminds me of my old high school track coach.. the guy who was on the other end of my first-ever card show purchase (since re-entering the hobby) nearly two years ago, and was the dealer I spent the most time patronizing until he stopped coming to the shows several months ago. Turns out he moved to Denver, but drove up for this show and to visit friends and family in the area.

So it was a nice reunion between me and his sweet vintage cards. I picked out a decent stack of cards. I had thought some of the bins were 25¢ and some were 50¢. As I was ready to pay, he told me that the signs were wrong and they were all 25¢ bins, and after 100 cards they were further discounted to 20¢, and with that new information I cancelled my "checkout" and continued to pile on my stack(s).

Unfortunately, since I had given up on any viable sources for my 73 and 71 setbuilds at this card show (there are only 1 or 2 true vintage dealers left, and both are a bit overpriced), I had left my 73 and 71 needslists at home (my printouts are out of date at this point, and I don't have a smartphone, so I couldn't just bring up the Google Docs spreadsheet). As such, I had to wing it. I focused on 2 groups: cards in the latter half of the sets (since I've already got most low-numbers) and players I've heard of (figuring they could be upgrades, or I could flip them on Listia or use as trade fodder.)

I ended up with 250+ cards which cleaned out all the cash I had on me. At around 18¢ per card, I think it might have been my best card show purchase ever. 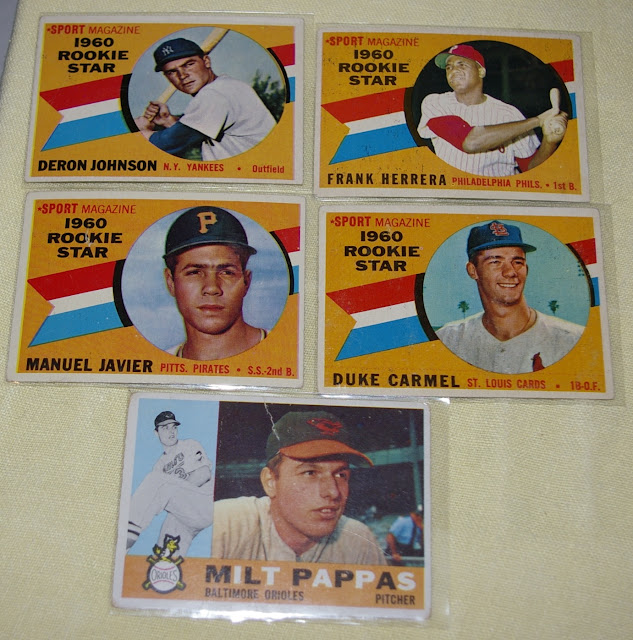 The discount bins started in 1960. Man, in hindsight, maybe I should have hit an ATM and just gotten all the 60s Topps. But I was restrained and only grabbed 4 Rookie Star cards and a Milt Pappas.
Deron Johnson led the NL with 130 RBI in 1965 and later got a ring with the '73 A's.
Julián (Manuel) Javier was traded to the Cardinals in May 1960 and was their starting second baseman for the next decade, with a couple all-star nods and a couple rings to his credit. 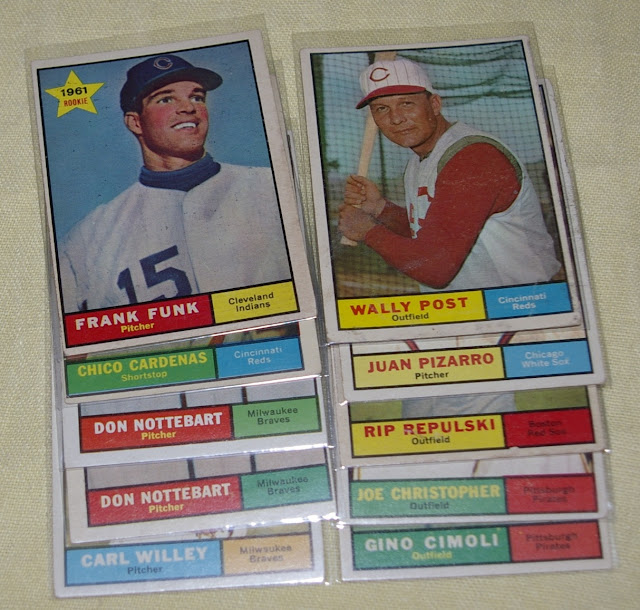 Got a few 1961 Topps too. Again, going for names I've heard of, semi-high numbers, teams I trade a lot, and guys with a rookie star.. because everybody loves rookies! Just look at that fresh-faced Frank Funk!
I went somewhat heavy on Milwaukee Braves cards, figuring one of the many Braves/Milwaukee collectors out there may need them. (If so, speak up, Tony L., John Miller, Wes, et al.)

Speaking of 1965, next up is what I'd consider the crown of the purchase: 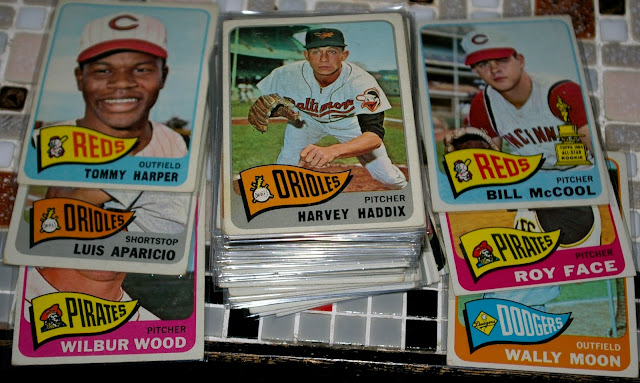 Big stack of 1965 Topps! This is a set I'll probably work on completing one day in the not too distant future, though I'd like to first finish off 1973 before giving it too much attention. Between this haul, the lot I graciously got from Kevin G. a couple months ago, and the smattering of singles I already had, I would bet I'm at around one-third complete with this set already (it's 598 cards total), though I've yet to sort them out and work out a haves/wants list. This is another instance of where in hindsight, maybe I should have hit the ATM and just grabbed all the 1965 cards. After all, finding a cache of '65 singles in solid condition for 18 cents each isn't something that comes along very often in one's life. 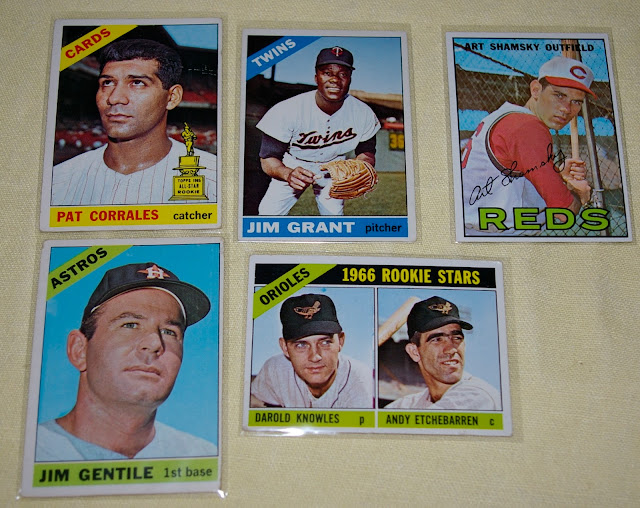 Next are a few '66s and a '67. Love that Pat Corrales with the big all-star rookie trophy and the "Are you there, God? It's me, Pat" photo. Mudcat Grant. Big Jim Gentile. Miracle Met Art Shamsky. Some fun names there! And the rookie pairing of Darold Knowles and Andy Etchebarren both went on to fine, long major league careers. 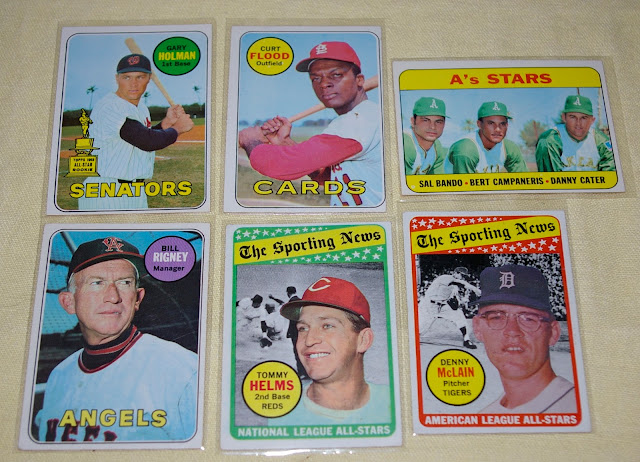 No '68s. But a few '69s. A couple years ago I bought a big lot of '69s off eBay that I've since distributed away in trades and Listia sales, so I'm a little burnt out on the set, but these few cards caught my eye. 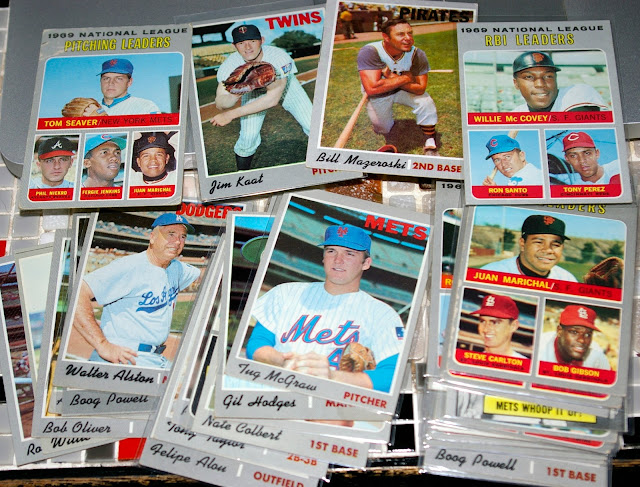 While I'm not a big fan of 1970 Topps, the gettin' was good, as they say, and so I got! Many big names here, including LL cards jam-packed with HOFers. 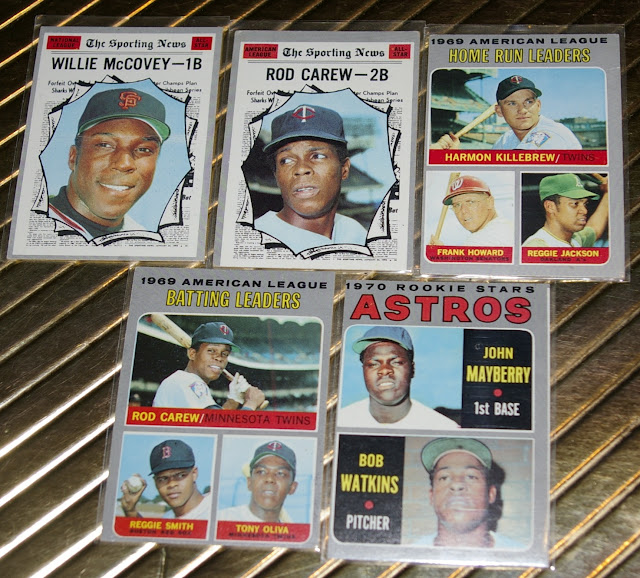 The Reggie 2nd year LL with Killebrew and Hondo was one of the cards that really had my eyes popping out when I came across it. The McCovey AS would have been even better, though it has a big crease not very visible in the photo that knocks it down a bit. 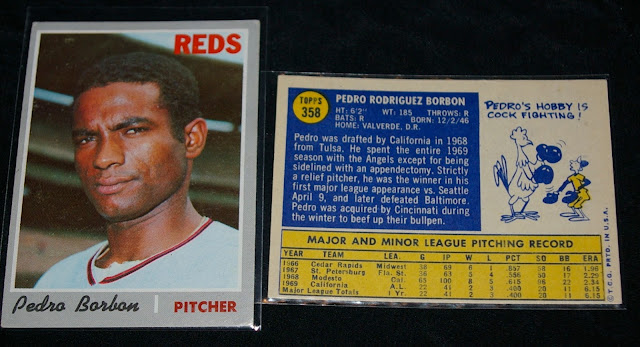 I doubled up on the infamous "cock fighting" card! 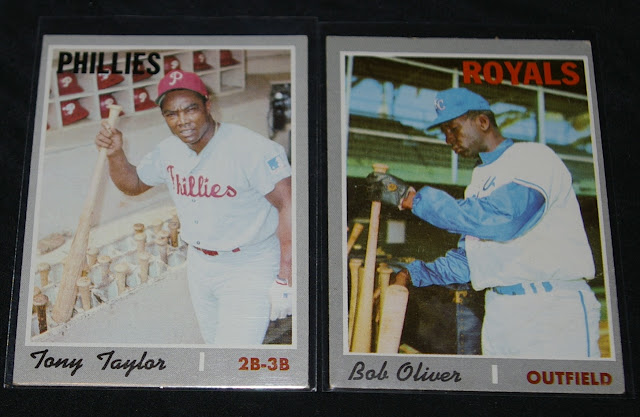 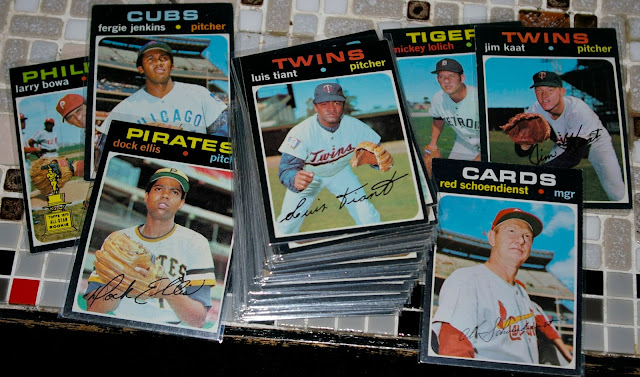 1971 Topps is the other vintage set I'm rounding the corner with. With no needslist on me, I grabbed cards of big names and cards with high(ish) numbers. I haven't had a chance to sort them out with my setbuild yet, though I anticipate plenty of needs and upgrades here. 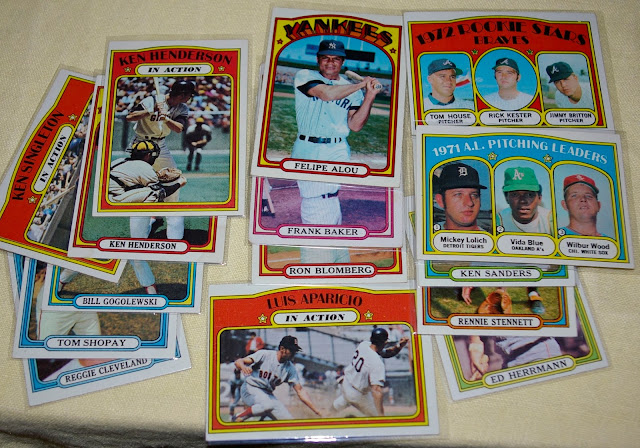 I have valiantly fought off any urges to ever entertain thoughts of one day considering to complete 1972 Topps, and that remains true today. But I went ahead and picked up a few guys I've heard of. There weren't really any true high-numbers to be found, but I got a few in the #400-500 range. 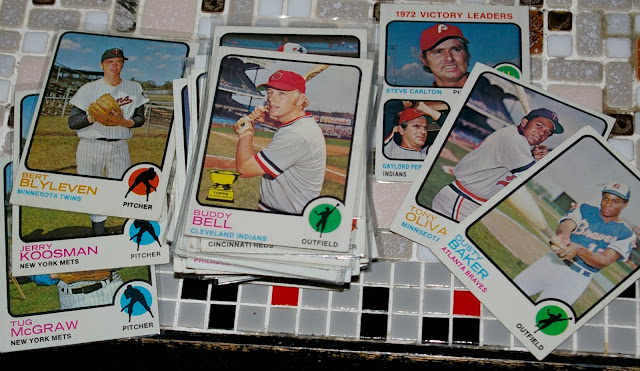 When I got home and sorted out my stack of probably about 60 cards from 1973 Topps, it turned out I only really needed about 4 or 5 of them. So that was a bit of a bummer. ...BUT... 90% of the other cards (dupes) I ended up with were condition upgrades for my setbuild, so it definitely wasn't a waste and still well worth the expenditure. A Buddy Bell RC for 18 cents?! Shu?-YEAH! 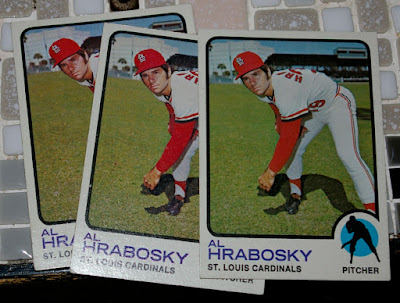 Anybody need an Al Hrabosky RC? I'm your guy. 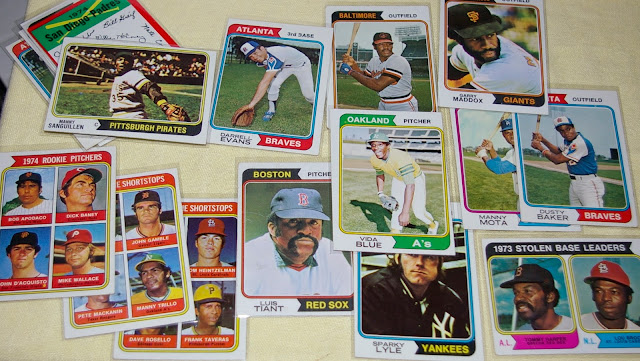 1974 Topps is a set that doesn't do much for me, but ended up with a nice little lot of cards, highlighted by a terrific Vida Blue card I've been after for a long time. 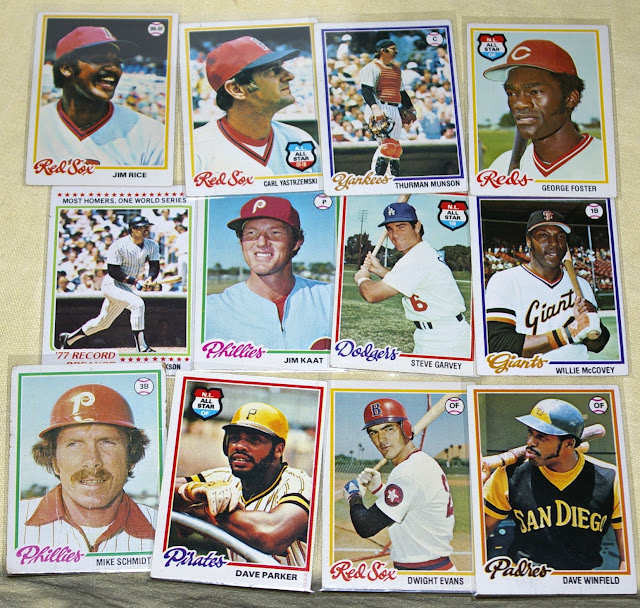 Like with '74, I've never been wild about 1978 Topps, but I was very happy to pick up these dozen A-listers, even if I already had some of them. 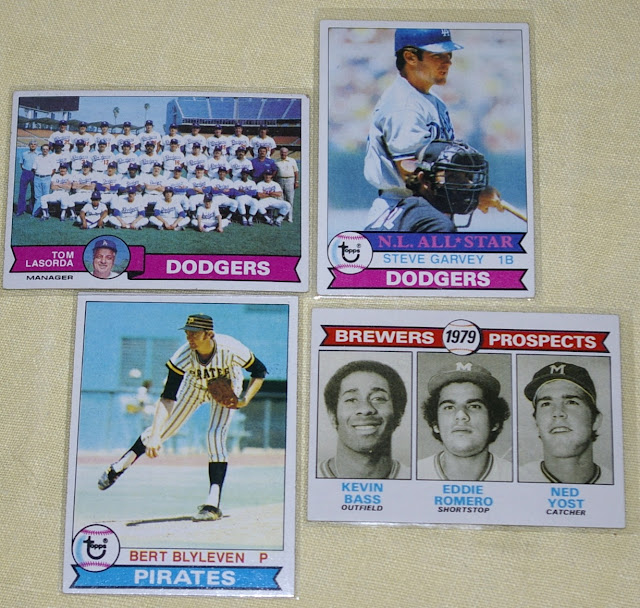 Finally, here are a few 79s I was compelled to throw on my stack for whatever reason.

The guy even had some modern cards mixed in, and I ended up with a buck or two worth of them, but I'll keep this post to vintage and save the rest for another time.

So yeah, this haul was a very nice boost to the pre-80s area of my collection. It'll help me to not get too jealous next week reading about all The National hauls that'll be popping up on the cardsphere. And it was great to dig through "my vintage guy's" stock again for old time's sake. He was talking about maybe toying with the idea of moving back to Oregon (the Denver altitude is tough on his breathing), and man, that'd be nice. I love when I can pick up a cheap stack of old cardboard at a show.

I should mention that much of this stuff is available for trade (barring setbuilding/PC needs of mine), so don't be shy to ask about anything if you saw something you need.
Posted by defgav at 3:44 PM