Landed one of my top wants yesterday thanks to a Twitter trade. 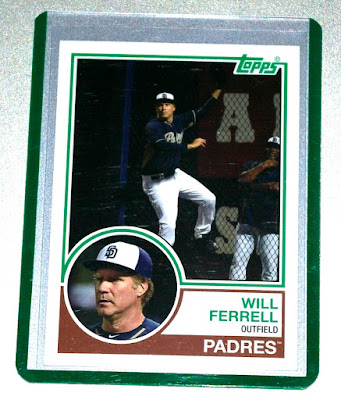 Yep, Will Ferrell's Padres card. I'm not chasing all 10 teams, but I did want to pick up the San Diego card in this insert set from '15 Archives. A guy on Twitter going for the set pulled this dupe and I was able to trade him the Angels Ferrell I pulled for it (still have the Giants available). He even threw in a bonus Shaq card. Thanks @CardCowboy! 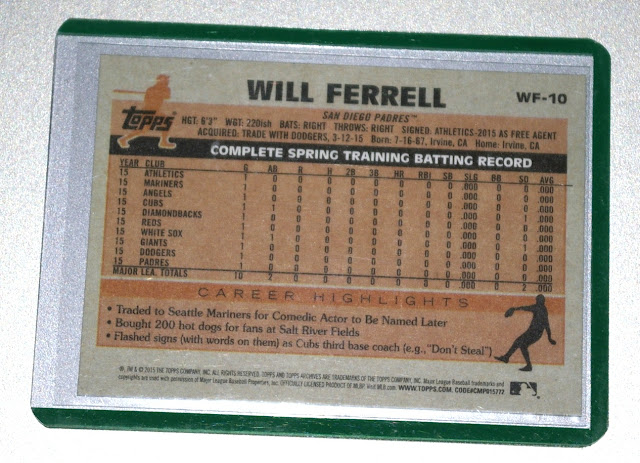 I like that Ferrell retired as a Padre. They should have kept him on the team all year. He'd probably be right up there among the offensive team leaders this season. He's already tied the all-time team record of most times hitting for the cycle.


Since getting limited TV service earlier this year after years of having "cut the cord" I still don't watch much (we don't get anything like ESPN, Comedy Central, or Cartoon Network, unfortunately), but HBO was included with the deal, so I watch a few a their shows. The only thing I make a point to catch "live" is Game of Thrones.. everything else I watch is on demand. John Oliver, Eastbound & Down (almost through it), Silicon Valley, Veep, oh and I finally just finished The Wire a few days ago.. that's a good show. Tried to get into True Detective a few weeks ago, but haven't gotten around to watching the second episode yet.

One thing I did watch on regular TV recently was the All-Star Game. Man, it reminded me that I really hate commercials. And Joe Buck. (Was it just me, or could you really sense the antisemitism in his voice when he'd say the name Keuchel? Sorry, bad joke. Kidding aside, Joe Buck is just awful.) Otherwise the game was fine.

I also signed up for mlb.tv back during their Father's Day sale. I've watched parts of a few games so far (mostly Padres and Dodgers Vin Scully), but I feel I should be watching more to get my money's worth. Probably once the pennant races start heating up I'll be motivated to catch more games. Bummer the Padres couldn't have stayed in contention. (They really should have brought back the brown; That's what jinxed them, I'm positive!)

This is kind of a boring, rambling post about my TV watching habits. Sorry, I should be bringing my A-game; it's Pull-Tab Awareness Week, after all. As far as Will's card up top, it did not come packaged with pull tabs, but blue tape was used, so we'll give Card Cowboy a pass. Even the blue tape left a sticky residue on the top-loader (I trashed it and replaced it with this green-bordered one I had lying around.. I think it really makes the card pop!).. so it just goes to show you that even blue tape isn't perfect 100% of the time.

Also arriving in the mail yesterday was a small Sportlots order, the contents of which we'll see another day. The seller put the 4 cards in a team bag, protected by Card Saver type things on either side, then put a piece of scotch tape to seal the team bag (no tabs! grr) instead of using the adhesive strip on the team bag. That was kind of lame, but nowhere near as bad as no-tab scotch tape over a top loader. So that guy also gets a pass this time, but could use improvement.
Posted by defgav at 3:55 PM