All in with 2004 Topps Chrome Black Refractors

OK, I've officially added 2004 Topps Chrome Black Refractors as a full-blown "set I'm working on" by making a want/have list (which can be found here).

As I've said before, 2004 black refractors really resonate with me. They're just really f'n cool n' so pretty. I first fell in love with the 2004 Retired autograph black refractors, and that eventually spilled over to the 2004 Topps Chrome black parallels.

Completing the entire set won't be easy. These things were seeded something like just one or two per box. And there are nearly 500 cards on my checklist. And the set's coming up on a decade old, so it's not like it's a hot set with collectors. But luckily for me, there are no big-name autographs or rookie cards included. So besides stars like Griffey and Jeter, I shouldn't have to shell out too much for any particular card.. but it'll take a lot of patience. This is definitely a long-term collecting goal, not something I'll bang out in a year or two. These cards aren't super plentiful, and even commons cost a buck or two. (I don't want to think about how completing this set will end up costing me over a thousand dollars, assuming I do actually ever finish, and I likely wouldn't be able to sell it for even half that. I'll just have to take it to the grave with me.)

In addition to the regular base card parallels, there are 25 (or 26?) first-year autographs which are each numbered /25 (a subset of the black refractors, not inserts or parallels-of-parallels). These will likely be my biggest expenditures due to their scarcity, though lucky for me the biggest name on the auto checklist is Carlos Quentin. Other than maybe Tim Stauffer, there really isn't anybody else who stuck in the majors very long, with the majority of the guys not ever even sniffing the bigs. So again, even though some sellers ask for a lot, I should be able to land them cheaper with patience. For example, I recently checked off my first auto of the set and I got it for the opening bid of 99¢ plus $2.75 shipping. 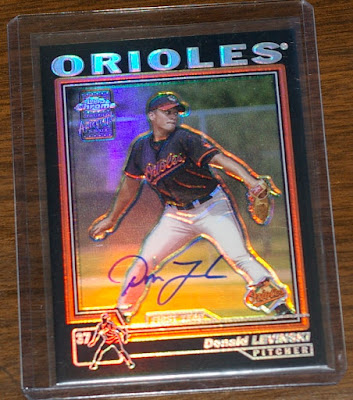 Don Levinski here never got above A ball, but it sure is a nice-looking card. The design is similar to the 2004 Retired autos, with the biggest difference being there's no faded white area at the bottom of the picture for the signature. As such, they don't pop quite as much, but it's a minor complaint.

I'm including one insert set as part of my set build. The Chrome-Town Heroes relic inserts happen to be black refractors, so I'm counting them as part of the black refractor master set. These hopefuly shouldn't be too pricey for me, though there are a few big names, lead by jersey swatches from Frank Thomas and Chipper Jones, and bat chips from Pujols and A-rod.

I already had the Mark Prior bat relic, and I recently added the Barry Zito jersey. 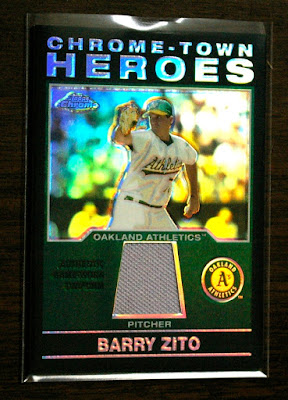 Oh, and hey, I just got the A-Rod bat card off Listia of all places! 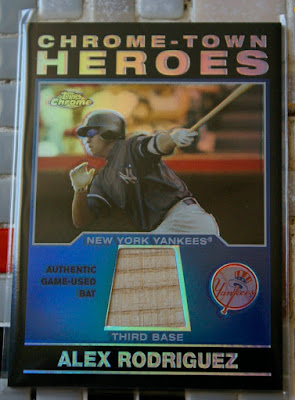 And now here are a few regular black refractors I've picked up recently from Just Commons, eBay, and Sportlots. 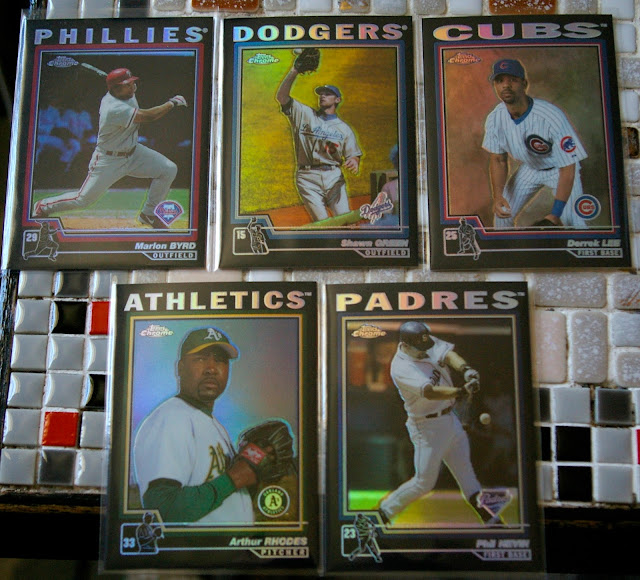 And there are a few more hiding around my card room somewhere, including my man Fred McGriff. I also won the Miguel Cabrera card on eBay like a couple weeks ago, but it hasn't shown up yet (grrr).

Here's where I'm at currently as I set off on this dark, shiny journey:


It goes without saying, but if you've got any 2004 Topps Chrome black refractors available for trade, pretty please get in touch! Once again, here's my 2004 Topps Chrome black refractors wantlist. Hopefully it's taken you about 7 minutes to read this and the song linked up top is just about ending, assuming you clicked play to get the full sensory effect of this blog post. I think it makes a good theme song for this project!