A few months ago when I pre-ordered my two Archives boxes (*groan*), I threw a hobby box of 2014 Panini Prizm Perennial Draft Picks Baseball in my cart to push my order past the free shipping threshold. It's basically a "half-hobby box" at only 12 packs.

I busted a box of this back in December and it was fun enough, so figured I'd try another one. As with most Panini products, the base cards aren't that great, but there are enough colorful parallels and stuff to keep it interesting, and the guarantee of at least a couple on-card autographs is a draw for me. Plus I'd have an outside shot at pulling one of the several Gavin LaValley parallels I still need from this product.

I used this box as part of my "cardless day breaks," meaning I opened one pack on each day when I otherwise didn't get any new baseball cards; because a day without getting baseball cards is something that no one should ever have to endure. And I finally worked my way through the box, so now I'll show off the highlights.

Although the box doesn't seem to have stated odds anywhere, the types of cards I pulled in this box were all in line with what I had pulled with my first box: 4 autos, 4 color refractors, and 4 regular refractors. (I refuse to call refractors "prizms"! Prizm is the name of the brand! Does Topps have a trademark on the word "refractor"? Why doesn't Panini use that word? It leads to confusion.) I didn't pull anything "super sick" but it was a decent box.

Let's start with the autos: 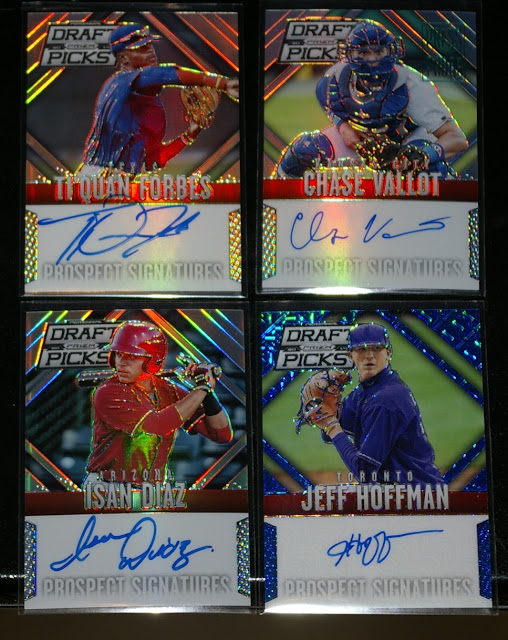 Unlike last time when one of my four autos was a redemption, this time all are in-hand out of the pack. So that's nice. (..Although, the redemption I pulled last time was the biggest name [Mets' top pick Michael Conforto].. and none of these guys are really big names.)
Ti'quan Forbes hasn't done much yet.
Chase Vallot ("press proof" /199) hasn't been hitting very well.
Isan Diaz seems to be doing ok this year. He gets the award for best signature of the bunch.. reasonably legible.
Jeff Hoffman ("blue mojo" refractor #'d 53/75) - Biggest hit of the box. Hoffman was the 9th overall pick in the 2014 draft despite missing all of that year due to Tommy John surgery. Seems to be off to a solid start this year. I really have a knack for pulling decent Blue Jay cards. Someday I should vacation in France and bring a big box of cards for the Card Poppa Boy (sic). 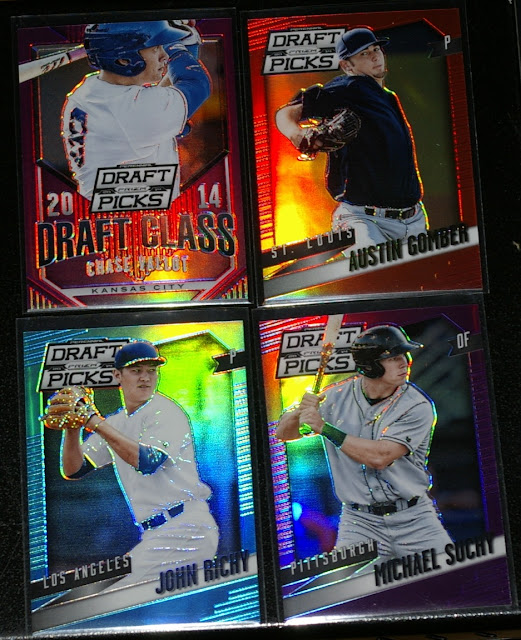 Here are my color refractors. There's Chase Vallot again. I don't think these other guys are big names. At least they're tradeable teams for me. (assuming "Los Angeles" means Dodgers, not Angels.) 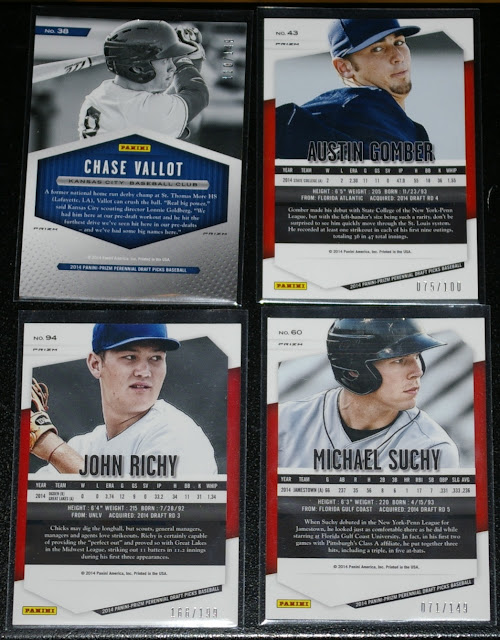 There are the numbered backs. 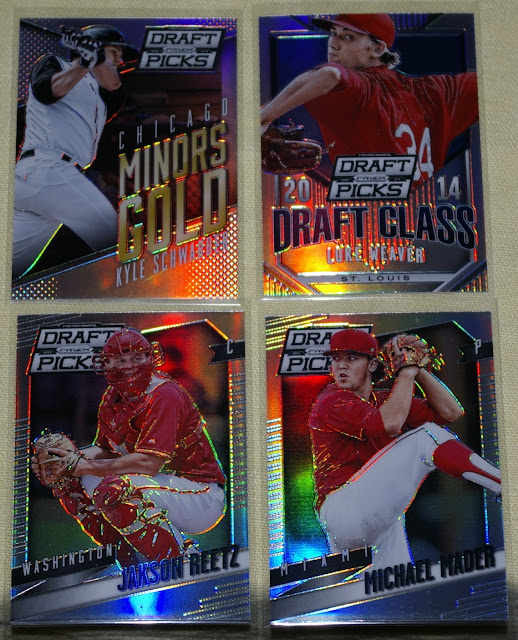 Here are the regular unnumbered refractors.
That "minors gold" insert seem to be seeded one per box (I pulled Jorge Soler last time).. Kyle Schwarber is a nice pull there.
I remember Zippy Zappy talking about Michael Mader.. it's cool that his Twitter name is DarthMader or something like that. 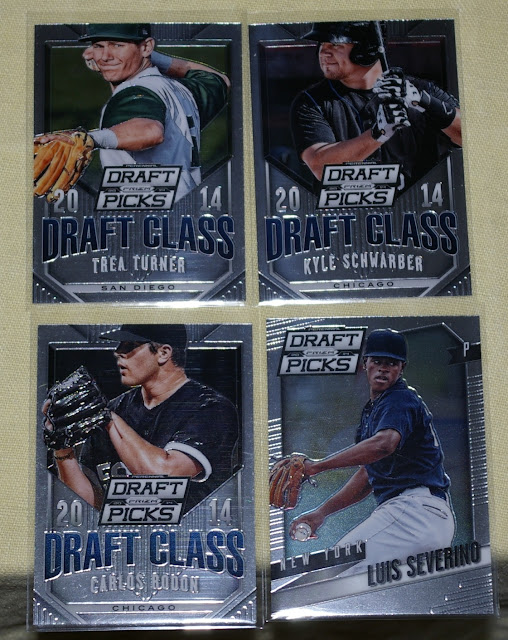 Here are four base cards (well, non-parallel, at least) of guys I've heard of.
Trea Turner.. *Sigh*.. swapped by the Padres for Wil Myers. I have a feeling San Diego is going to be kicking themselves over that deal in a couple years (if they're not already).
Schwarber again.
Carlos Rodon is good, right?
LUUUUIS Servino I only know because Zippy is big on him.

So that was my 2nd box of 2014 Prizm Draft. Could have been better, could have been worse. At least it was cheap (by modern "guaranteed auto[s]" hobby box standards) and served its purpose of getting me free shipping on my order. Don't think I got many dupes from my earlier box, either; always a plus. I don't see myself buying another box of this (or honestly any Prizm product ever again.. [really burnt out on that metallic silver at this point].. but never say never.)

It's funny that in two boxes, I haven't pulled a single goddamn Gavin LaValley.. not even the base card, much less a fancy parallel I needed. Bummer.

Pretty much all these cards are available for trade (I might wanna just hang onto the two Schwarbers and the Hoffman auto), so let me know if you're interested in anything. Otherwise, I'll hold onto them and hope 1 or 2 of these guys eventually pans out to be a quality major leaguer.
Posted by defgav at 4:03 PM