Last year I went to the Project Pabst music festival the same day as a card show and it made for a fun post. This year, we decided to go again (it was yesterday). While there wasn't a card show this weekend, I did get just a big ol' 400-count box from friendly reader Adam E. a day or two before which felt like scoring a hot dimebox at a card show, hitting a bunch of guys I collect. So let's try to do a concert review -slash- trade recap.

First band of the day for us was Alvvays (pronounced "Always" though it looks like it should be "All Vays"). They played a good set with dreamy, summery pop song stylings.

And one group of players I'm alvvays happy to receive cards of are Pads in the Hall. When I got back into card collecting a few years ago, my first "focus" was collecting any former Padre inducted into Cooperstown, so I've pretty much alvvays been collecting these guys. 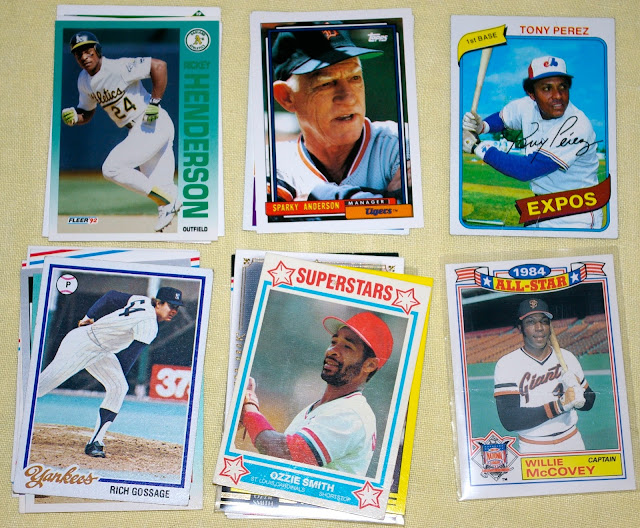 None of these visible cards are Padres cards, but these guys all suited up for San Diego at some point on their way to the HOF (Sparky as a coach, and Perez with the PCL Padres, but I count 'em). Nice stack of Gooses (Geese?) including both his 1988 Fleer and 1988 Fleer Update which you can kinda see poking out behind the 1978 Topps card that airbrushes him into a Yankee uniform from Pirates gear. You can kinda tell that was a pillbox hat.

Next was The Both.

They're lead by the power duo Aimee Mann and Ted Leo, each accomplished musicians in their own right. They sounded pretty good, though we couldn't see them from our spot in the shade. Snapped this photo while briefly checking them out during a trek to the portapotties. Aimee was improv'ing a song about Ted changing a guitar string. Marcus from the blog All the Way to the Backstop has mentioned the band on his blog a time or two, so let's dedicate this next bunch of cards to him. 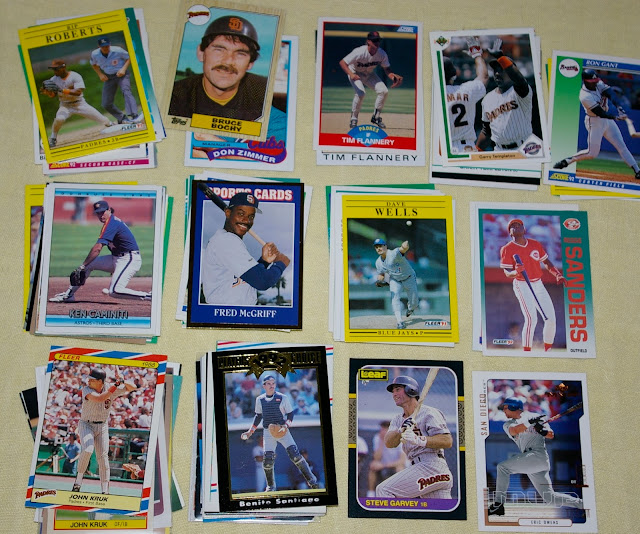 Lots of Padre favorites of yesteryear.

Passion Pit was the next band, as you can see from the display behind them. They put on a fine show, but didn't blow you away or anything. Honestly, they're probably better on album than live. My wife mentioned the singer seemed to be struggling to hit the high notes. But I do consider myself a fan of the band and it was a fun set, so I don't mean to be too negative here. 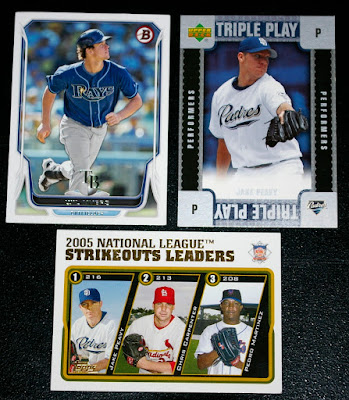 There weren't many cards of active players in Adam's box, but here we've got current Padre Wil Myers and former Padre Jake Peavy. I guess you can say these two guys still have passion for the game (--ok, not all these bands/cards pairings are golden!) Wil is about to start rehabbing and hopes to be back in the lineup soon. Peavy also had some injury issues this year, but I believe he's back pitching with the Giants now and just picked up his first win of the year a couple days ago.

And here are a few more random cards, including a Gavin, a Dock Ellis, and a Jordan oddball. 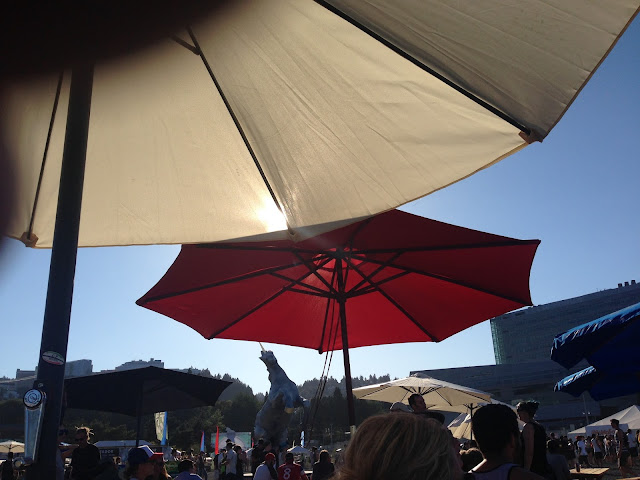 Did I mention it was nearly 100 degrees out? Hot as fruck. Nary a cloud in the sky, so shade was a valuable commodity. Luckily we scored this table which thanks to a couple strategically placed umbrellas kept us reasonably shaded through the hottest part of the day as the sun gradually made its descent. And yes, that's a unicorn statue back there. 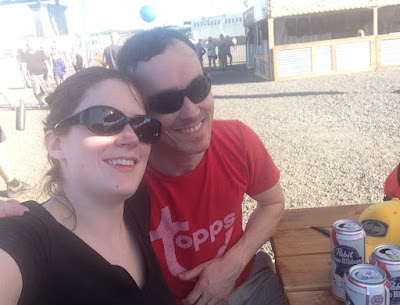 Here we are. Note me flying my baseball card geek colors via the Topps shirt. We're generally a bit more of "beer snobs" than to slum it with PBR (her more so than me), but seeing as how Pabst sponsored the event, they were pretty much the only game in town, and the price for tallboys was very reasonable (by festival alcohol standards). So needless to say.. "when in Rome".. we had a few.

We used a rideshare (Lyft) for the first time, so we didn't need to worry about driving. Getting there went off without a hitch. Getting home, however, was a bit more nerve racking. My wife's phone was on the cusp of dying and the guy hadn't shown up.. apparently getting lost around the area. It all worked out fine after about 15 or 20 stressful minutes, just ended up being a bit more expensive than it should have been.

But back to the concert...

The Buzzcocks. They're a punk band who've been around forever (--well, 1976). As with The Both, they were on the South Stage, so we could hear them but not see them, instead having dinner in the form of a couple pieces of pizza in our spot in the shade. For a bunch of old guys, they sounded great. They played personal favorites "Why Can't I Touch It?" and "Ever Fallen In Love" among others.

For a band revered as legends to followers of underground rock, they're surely not a household name to the general public. And to extend that to baseball cards, here are a few players who are remembered fondly by many baseball fans, though they never got a plaque in the HOF...

Time for the headliner: 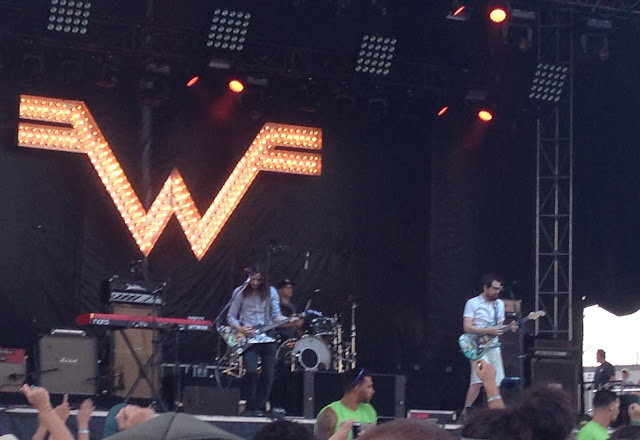 Weezer! By this point in the day, the sun was setting so we abandoned our shady table to get closer to the stage. By the second song, the sun had mercifully sunken behind the mountains and we were no longer melting from the heat. The band sounded great and it was a lot of fun singing along to their hits with the rest of the crowd. I've been a Weezer fan since their first album in 1994 and I've seen them a handful of times over the years, including once in a small club that I love to brag about at any opportunity. I showed off my Weezer autographs and memorabilia on the blog a few months ago.

Weezer is a pretty big name in the world of alternative pop-rock music (or whatever you wanna call them), so let's close the trade post with some big names in the baseball world. 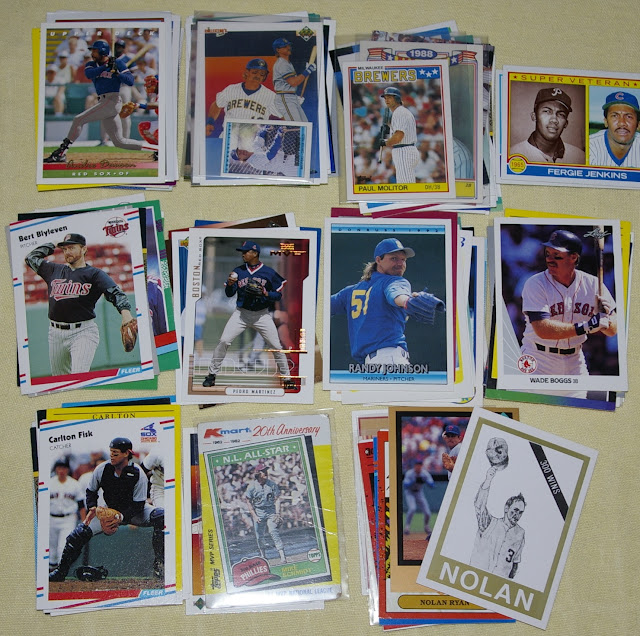 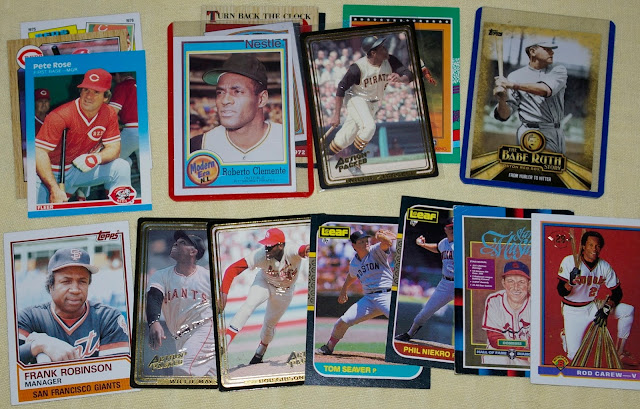 Great stuff! Not pictured is a stack of Frank Thomas cards.. which I'm pretty confident have helped me get to the magic total of 100+, including a bunch of cool oddballs. Stay tuned for those in a future post. Also, several Griffey's didn't make their way into the post; my bad.

Once again, big thanks to Adam for rocking my PCs with hundreds of needed cards! Very appreciated!
Posted by defgav at 4:00 PM