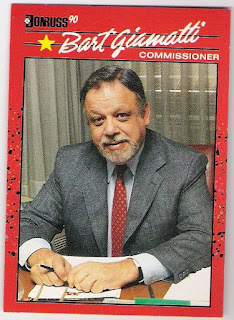 Sport Card Collectors won my recent contest thanks to the Angels and Red Sox combining for 12 runs in their first game on 7/20. A case could be made that since it was a doubleheader (the original contest game on 7/19 got rained out), both games should add to the total, but then the winner would be #22 which was jupiterhill who voluntarily disqualified himself for not actually getting around to preaching the gospel of Pull-Tabs until after the awareness week had ended. So let's just give it to Sport Card Collectors.

SCC won another contest of mine just a few months ago back in March. And I'm not sure if you follow his blog, but the guy wins an incredible number of contests! It's crazy seeing him show off new prize winnings nearly every week. I guess it pays to keep an eye on contests on the blogs, Twitter, and whatnot, and from time to time you'll get a prize. And SCC seems to have a little more luck than the rest of us. All he does is win!

While it's nothing against him personally, in the interest of competitive balance I'm going to pull a Bartlett Giamatti here and issue SCC a lifetime ban from my contests going forward. I'm not a heartless monster; he can apply for reinstatement in a year and I'll hear his case. And I'll send him off in a blaze of glory with a big haul from this contest, so hopefully there will be no hard feelings.

I say "him" but Sport Card Collectors doesn't seem to reveal his or her real name or much personal details, so I'm just making an assumption that he's male. And that username is plural-- not just one Sport Card Collector.. but multiple Sport Card Collectors, so for all I know, it's a team of bloggers posting under that account. Aha!-- that must be his/her/their secret to contest domination! They must spread out to scour the web for contests, then split the booty amongst themselves! Brilliant!

This silly post aside.. Congrats, SCC! I'll round up some good cards for you and get your prize mailed out shortly.

UPDATE: Let me clarify Sport Card Collectors is a hell of a generous blogger who while winning many contest, runs a bunch himself. He's got a great blog and is undoubtedly an asset to the world of card collecting. I didn't mean for this post to sound nasty or anything. Much love to SCC!
Posted by defgav at 3:25 PM