Hey, we're halfway through 2015! Although my blogging claim to fame may be "the guy who came up with Wallet Card" back at the beginning of the year, maybe you've noticed that I've only done like one or two real wallet card posts since then myself. Probably the biggest reason for this is, gotta admit, I don't actually own a smartphone. I've still got an old flip-phone without much of a camera in it. My main camera is big and heavy, so I don't lug it out-n-about very often. So most of the time if I want to take a picture while I'm out, I have to borrow my wife's phone. She had actually passed her old iPhone down to me, which I essentially just used as a pocket camera sometimes (no phone service or internet [unless I happened to be in wifi range]). But over the past few months, it'd been acting up, and was officially put down for good a few weeks ago as I accidentally cracked it in a desperate last attempt to fix it. Chances are I'll finally pony up for a smartphone of my own one of these years, but for now, my random wallet card pictures will be limited.

But other collectors have definitely taken the ball and ran with it. There have been lots of great photos shared with wallet cards popping up in various awesome and interesting places. I love checking them all out on Twitter and the blogs and am proud to have had a hand in the phenomenon.

I don't think anyone would argue if I said that one individual in particular has risen to the king of wallet card. That's right, the Junior Junkie has been killing it. Let's see, there's been a trip to see the Northern Lights, an extensive multi-part feature at Mardi Gras (I'm still waiting on that link for the too-hot-for-the-blog photos), and meeting TV's Mr. Belding, just to name a few of the many highlights. Upper Deck has been supportive, with many re-tweets and even a blog post at the official Upper Deck site praising his adventures.

Therefore, it was an easy decision a while back when I went ahead and "officially" named TJ the first-ever Wallet Card Champion.

Yeah, I know the year is only half over, but I think it was a safe bet. Who knows, maybe I'll name another champion at the end of the year. Remember, there aren't really rules, it's just something fun to do. (And I don't necessarily have to be Official Mr. Wallet Card Commissioner. Honestly, that's more pressure than I'd like. Anyone is welcome to award prizes as they see fit.)

So what prizes did TJ win for his WC Championship title? 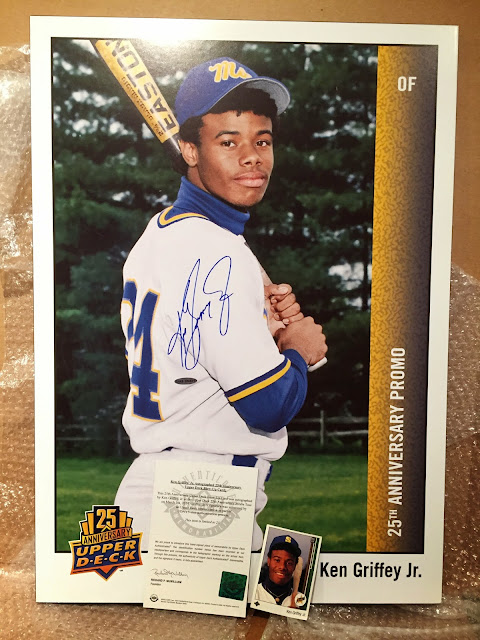 This is an amazing oversized "card" signed by The Kid himself.

Let's consider this his Grand Prize. ..though, yes, I admit, I didn't personally award it to him, but hey, that's the magic of wallet card! When you play the game with all your heart, prizes just come to you. Sometimes the "prize" is deeper and intangible, like going on a wonderful adventure, or learning a fascinating lesson or gaining a new appreciation of life or some crap like that. But in this instance, the prize was a sweet-ass autographed Griffey display piece.

I did actually send TJ some "prize package" stuff myself, though, including a few of those custom magnet cards I made a few months ago. I also made him a sketch card of one of his favorite obscure ballplayers, Bryan Clutterbuck:

And here it is in action:

So congratulations again to TJ for his incredible wallet card performance!

And thanks to everyone else who has been going all out with #walletcard over these past 6 months! Again, it's great checking out all the photos and stories, so please keep them coming!

A specific honorable mention should go to Bo at Baseball Cards Come to Life who has been taking many great wallet card photos at various interesting places around NYC.

I'll go ahead and dump some of my walletcard photos here to finish out the post. 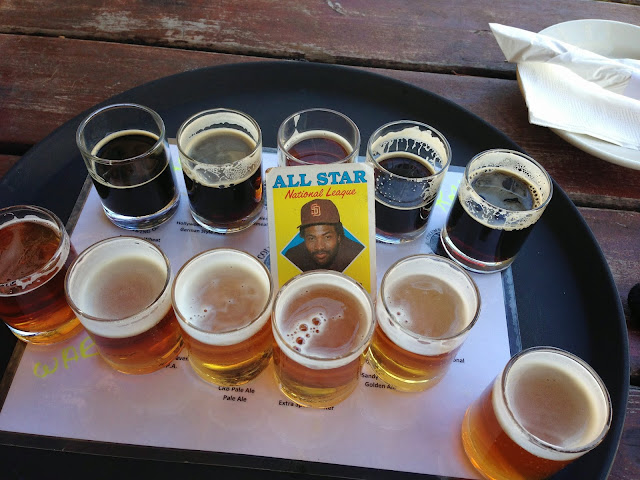 Here's Valentine's Day getting a nice flight of beers at a walking-distance-from-home brewery, even nice enough of a day to bring the dog and eat outside. That was fun. 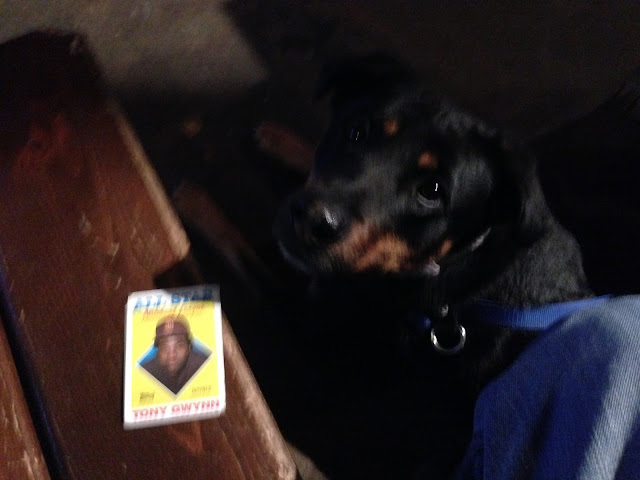 Here's a blurry shot from another outdoor meal out with the pup. I think this was at a place called Lucky Lab, somewhat of a regular haunt for us. According to the "last modified" date on the photo, this was from January 15th.. wow, that was a long time ago. And a cold part of the year to be eating outside. Well, Annie's a cute, sweet pooch, so we love taking her with us whenever we can. 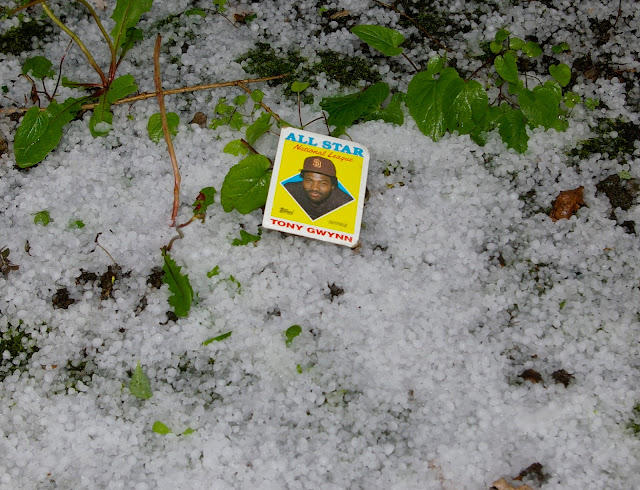 Oh, here's a crazy one.. One afternoon in April it just started hailing really hard. It was practically like snow.

Now let's close with a good one:


Back home after a nice weekend on the coast with the fam. Here's #walletcard Gwynn sticking his toe in the Pacific. pic.twitter.com/J7loPwEF8N
— Breakdown Cards (@breakdowncards) May 4, 2015

That was a fun little trip from a couple months ago. I don't think I'll have the chance to dip Tony in the Atlantic by the end of the year, but it'd be cool to "bookend" the country like that.

Well, that's it for today! Thanks for everything.
Posted by defgav at 4:01 PM