Everybody  knows 2015 Stadium Club is an incredible set. But I'm not really a set builder (at least not modern, full-size sets), so all I bought from it was one blaster that didn't pack much punch aside from the cool photos. But from reading about the set online, what really got my attention were the Crystal Ball inserts. Each of these things were purported to be a huge brick of a card and give off a cool visual effect in-hand. I'm a sucker for an innovative/gimmicky card, so I made a note to land one once the prices cooled off a bit. Seeded at one-per-case, they're definitely one of the scarcer hits you could pull.

Here's the checklist via Cardboard Connection:

Trout and Harper would be cool, but very pricey. After those two big stars, the checklist takes a steep downturn to young guys with just a year or two of major league service under their belt (I guess that goes with the whole theme of a crystal ball-- "looking into the future of these promising young players" or whatever). Out of the remaining names, Mookie Betts was the most intriguing to me. He seems to be a solid 5-tool player who quietly wrapped up an impressive first full season in the bigs. Maybe if Boston was in contention this year he would have gotten more attention.

And so anyways here we are and I've landed one of the #/30 Gold Foil parallels for about the price of a blaster plus tax.

It's a pretty cool card (if you can call it a "card"!) It's kind of like a shadowbox thing, with the player's photo on the bottom of a "well" area, and a clear dome over it, giving off somewhat of a spherical look, with a flat top layer over that all with a clear window down into the "crystal ball" hole. If these things were super cheap, I'd love to dissect it like how I did with a Gallery of Greats card the other day.

While it's a neat item, I'm not quite so enamored with it to where I'm eager to blow a couple hundred bucks chasing the full set of 10. But I might keep an eye on eBay to maybe try snatching up some of the others if I can land them in the single-digit range. 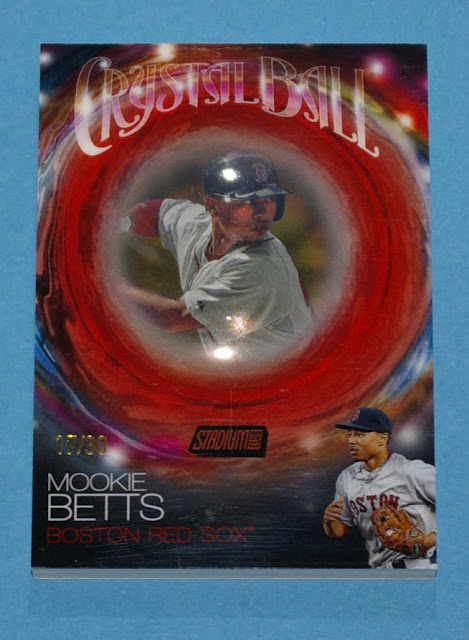