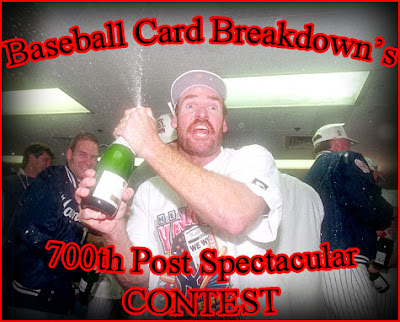 It's a good day! Pitchers and catchers have started reporting, signally the return of baseball for 2016. And we've arrived at another big round number here at Baseball Card Breakdown with this being post #700. Woot! Good job, me!

We'll get to the contest in a minute, but first.. I've been sitting on a certain TTM return I got a week or so ago to line it up with this post #700 because I'm so happy with it that I want to make a big deal out of it.

Wade Boggs put together a Hall of Fame career on the ballfield, and perhaps as impressive, has made guest appearances in some of television's greatest shows. In fact, he amazing made his way into at least three of my all-time favorite shows! That's fertile ground for me to make some neat custom cards.

I heard he was a dependable TTM signer-- an undefined monetary donation is requested, which Boggs generously forwards to a children's hospital charity (All Children's Hospital)-- so I whipped up some customs and cut a check. Less than a month later, my return came back successfully. I was through the roof! And though a week has passed, I'm still pretty stoked on the cards. 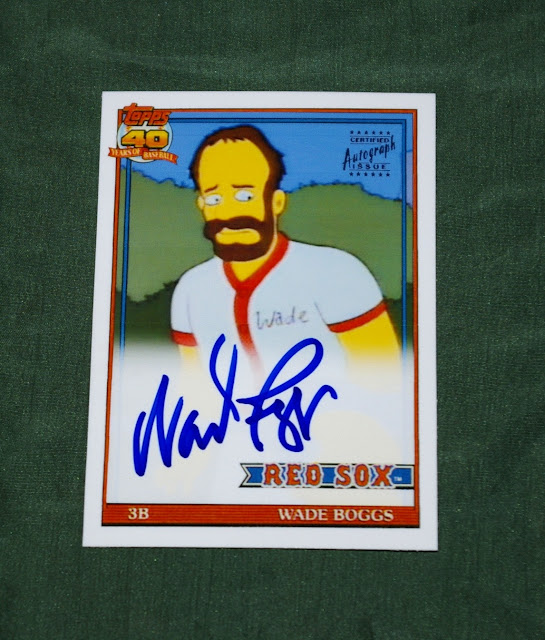 The Simpsons is my all-time favorite show (or maybe tied with MST3K), so there was never any doubt I would try to get a Simpsons custom signed. Victory! This marks my first ever Simpsons-related autograph and I love it. I actually designed this custom over two years ago, originally posting it in the series of Simpsons posts celebrating the "Homer at the Bat" episode. So with the heavy lifting out of the way, I just needed to clean it up a bit and print it out. 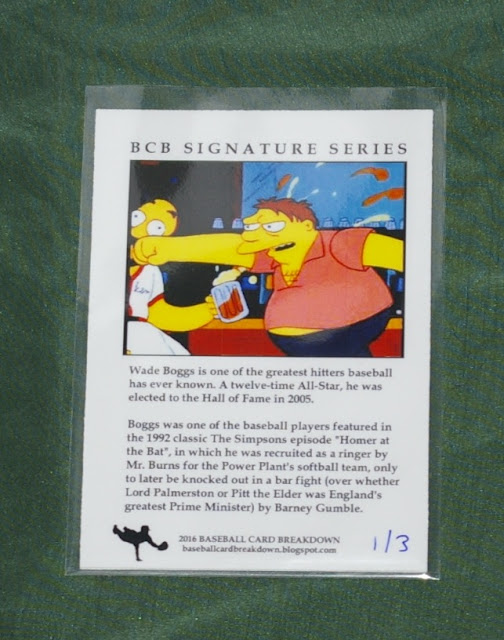 Rather than copy the real 1991 Topps back, I whipped up a special back recapping Wade's part in the episode.


Another classic show I love is Cheers. Like most of America, I watched it pretty much every week during its original run. These days, my wife and I watch an episode per week or so, working our way through the series on Netflix. A lot of these episodes I haven't watched since they originally aired. While a bit dated at times, it's still 80s sitcom television at its finest. 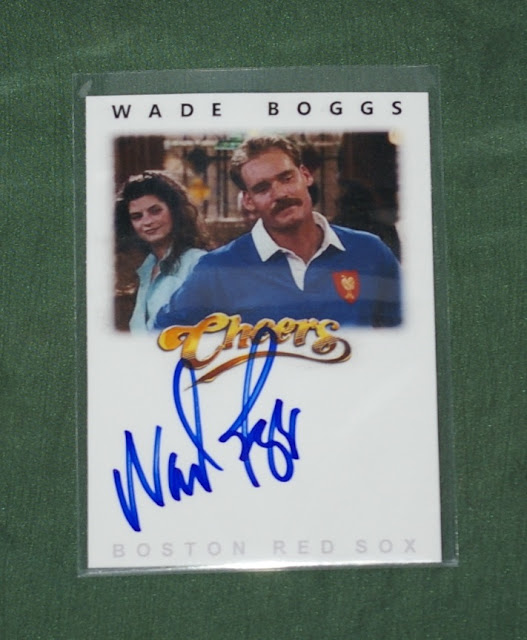 I really like how this faux 1996 Leaf Signature Series card came out. Instead of the foil oval, you've got the sharp Cheers logo. 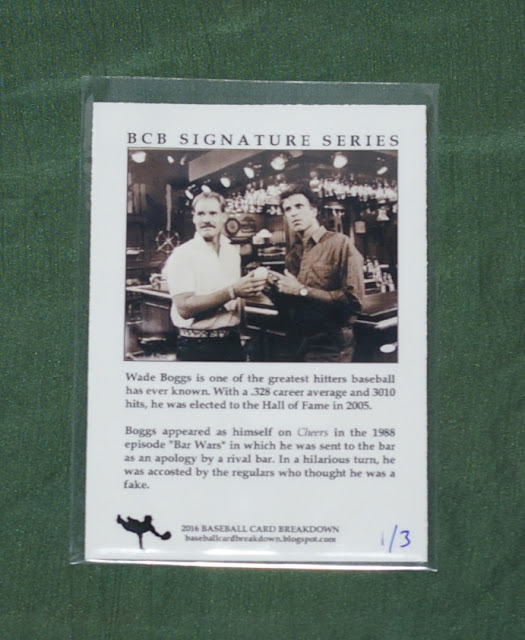 Again, the back has another relevant photo and recaps his appearance on the show.


And rounding out the trilogy of Wade Boggs tv customs, we come to probably my current favorite show: It's Always Sunny in Philadelphia. If you haven't seen it, it's about a despicable group of friends who get into hilarious situations, often leaving a trail of destruction in their wake. Not for the faint of heart, but it cracks me up. One particularly memorable episode is when the gang takes a cross-country flight and attempts to break Wade Boggs' legendary drinking record. Again, Wade steps up for a scene and knocks it out of the park. 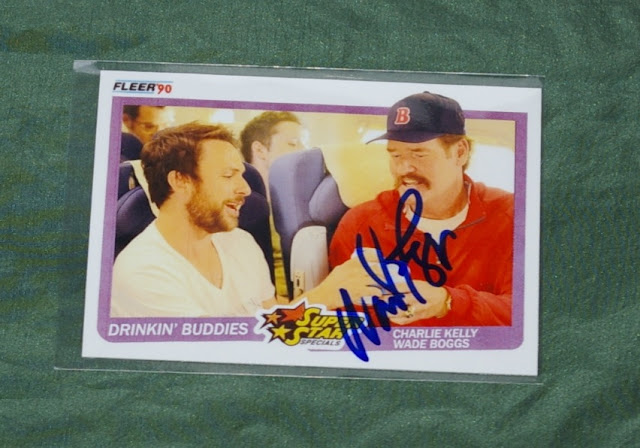 The 1990 Fleer Super Star Specials subset cards are just made for comedy, so I was excited to make this one. It turned out terrific, I'd say. Wade, always the pro, was sure to only sign on his space of the card, leaving room to complete a dual auto. And while it wasn't my original plan, I now think I'll look into the possibility of having Charlie Day sign the card too. That would be perfect.

Spoiler alert, don't read the back of this one if you haven't seen the episode yet (and you plan to). Always Sunny is also streaming on Netflix, FYI (And no, I'm not sponsored by Netflix or anything. I just watch it a lot, so it gets mentioned on my blog from time to time.) 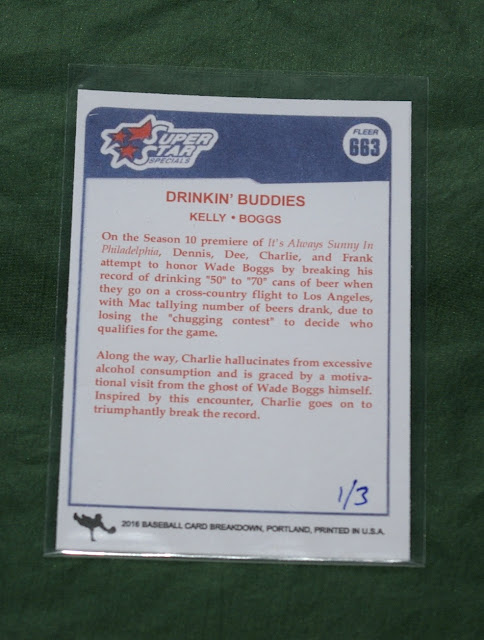 You may have noticed these cards are all hand-numbered /3 on the backs. You guessed it, I got 3 each of these cards signed (Big thanks again to the generous Mr. Boggs!), and am looking forward to spreading a couple extras around to lucky readers.

Grand Prize
- Your choice of one of these Wade Boggs autographed customs
- a custom card of whatever you want**
- a Pretty Girls custom mini complete set**
- some assorted real cards of the MLB team of your persuasion (Hopefully I'll be able to dig up some nice cards for you, but depends on what I have on hand and/or what I can find at the next card show.)

**These middle parts of the prize package are only included if the winner has posted a comment on my blog already sometime this year (between 1/1/16 and 2/16/16). I think I'll start doing crap like this with my contests as a way to encourage comments/participation, and discourage people from only coming out of the woodwork when there's a contest. Hopefully this motivates lurkers to chime in once in a while.

I'll also do a second-chance drawing (identical prize package as above) that will be offered to those who pimp this contest with a link on their blog, Twitter, Instagram, or the like and subsequently mention that they did so in the comments below.

I may also throw in "bonus entry" possibilities in upcoming posts, so be sure to check back.

Contest is open to everyone worldwide, though non-US folks may end up with a truncated prize package due to postage costs.

Entry period will last a few days, ending at some point Sunday evening, 2/21/16. Then we'll shake out the winners randomly that week.
[UPDATE: Contest is now closed! Thanks to all who entered!]

Thanks for reading and good luck!

As far as comment-spurring ideas you can choose to answer if you want:
Which of the Wade Boggs customs would you want?
What is your idea for a custom-made custom if you win?
Posted by defgav at 4:12 PM