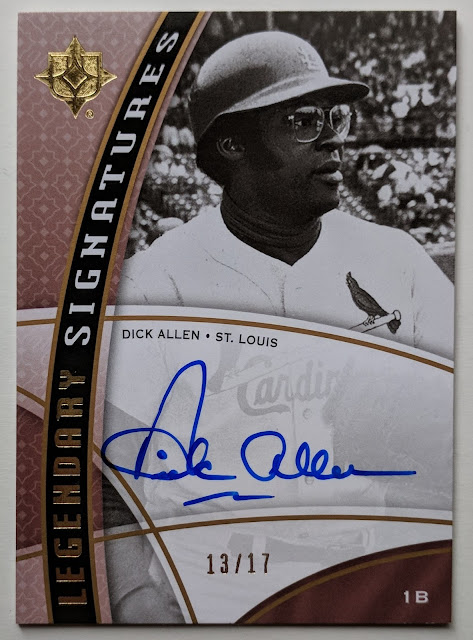 Really happy with this 2009 Dick Allen auto, even getting past my mild triskaidekaphobia to put in a winning bid on it. What makes it extra cool is it's a rare Cardinals card of him. Allen moved to the city of St. Louis in 1970, but his '70 Topps card features a deceptive photo of him from his Phillies days. Then in 1971, he moved on to the Dodgers, and his '71 Topps card features a pre-season photo posing in his new LA duds (see my old rollercoaster of a post investigating this matter). The only other card I can think of featuring a real photo of him on the Cardinals is his 1971 Kellogg's card (which identifies him as a Dodger on the back). So yeah, this auto is a unique hit for the ol' Dick Allen PC. 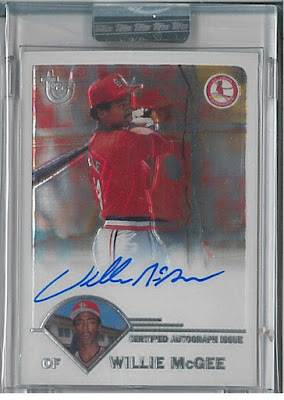 While the Cardinals are low on my list of favorite teams, let's go back-to-back with another Redbirds auto. This Willie McGee 2003 Topps Retired auto doesn't come along at a reasonable price very often, so when one did, I put in a decent bid and ended up winning it. 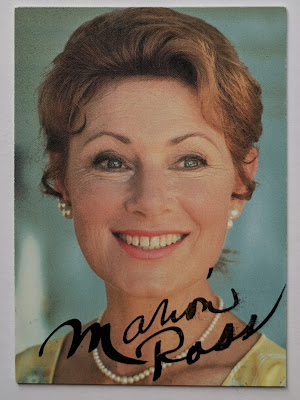 We rented Happy Days season 1 disc 1 on DVD recently (it's not streaming online anywhere, surprisingly, and I had a hankerin'), and that had me poking around Wikipedia reading up about the show and its cast. Gotta admit when I was a kid in the 80s watching the show in syndication, I didn't realize it was a throwback show.. I thought it was actually shot in the 50s! LOL. Anyways, reading up on Marion Ross, I found out her alma mater is San Diego State University. While collecting fellow Aztec alumni isn't a big priority for me, I do want to work on adding cards of notable names. So I looked to see if she had any decent autograph card options on eBay and ended up settling on this non-certified 1998 card for a few bucks. Looks good to me. 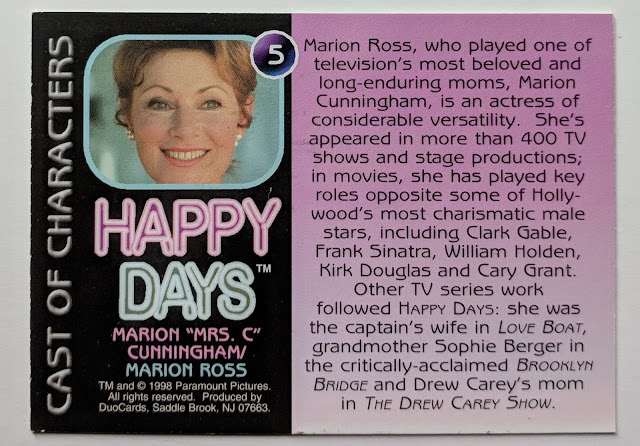 Here's the back so you can tell it isn't just a signed photo. 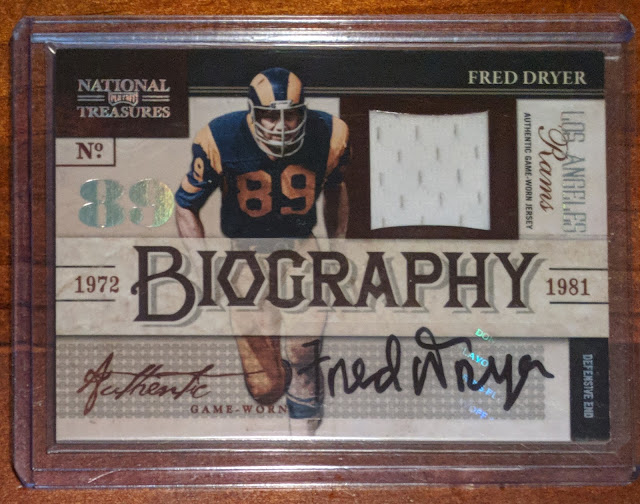 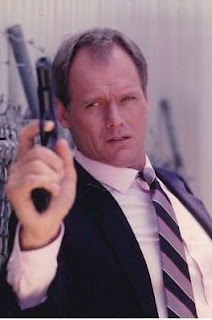 I picked up that relic/stickergraph #/50 for a good price late last year. Would like to add some of his vintage cards one of these days, too.

The past week has been slow for incoming trades, but I did get a nice PWE from Shoebox Shane a few days ago. Let's check that out now. 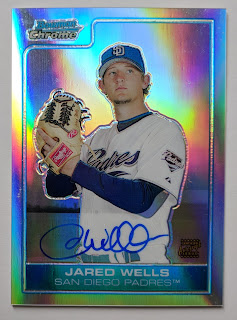 Bowman Chrome refractor autos are always awesome to own, even when it's a 31st rounder I've never heard of. At least Jared Wells cracked the big leagues for a few games in 2008. 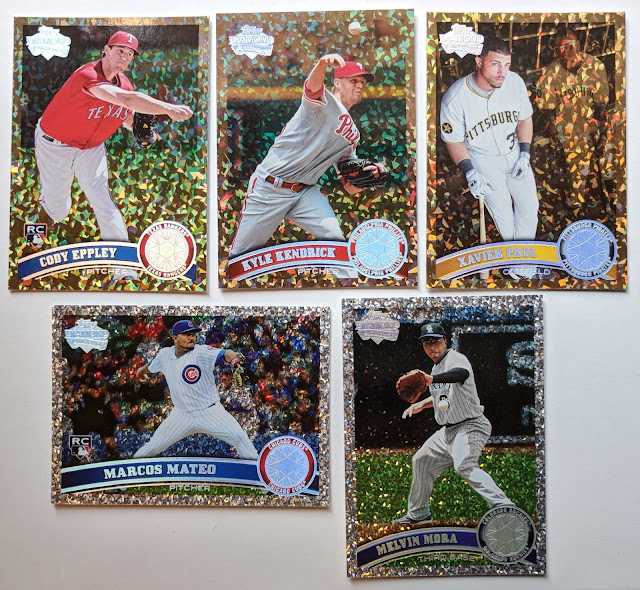 Shane is always good about setting aside 2011 Topps sparkly parallels for me. 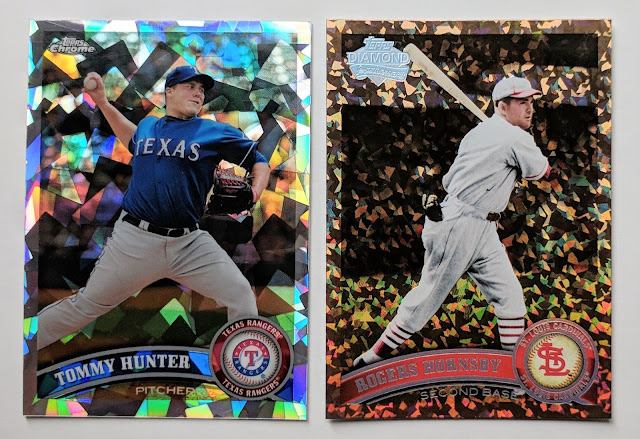 These 2 were clearly the highlights. I know Shane is collects both these parallels, so they must be dupes he had available. Love those atomic refractors! And the legends variations can be tough to track down, even base versions, so this cognac Hornsby is much appreciated.

Big thanks, Shane! I've got some solid buybacks set aside for you and will load up a return PWE shortly! 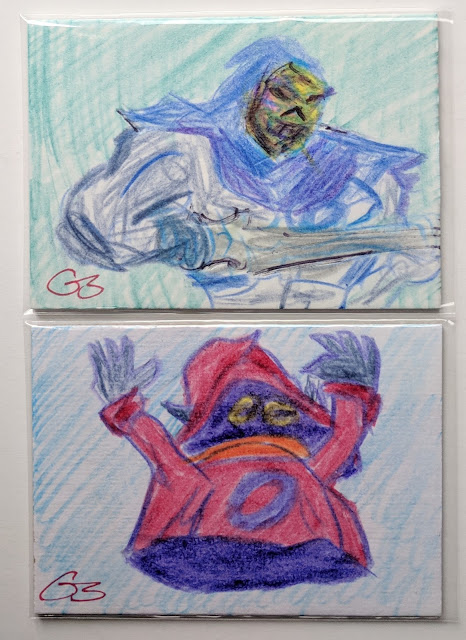 Some late nights after my wife goes to bed, I'll have a drink or four, queue up an 80s cartoon on Netflix (usually The Real Ghostbusters or He-Man) and if the creative urge strikes, I'll scribble out a sketch card or two. These are from last weekend. Not my best work, but I guess I like them enough to show them off here. 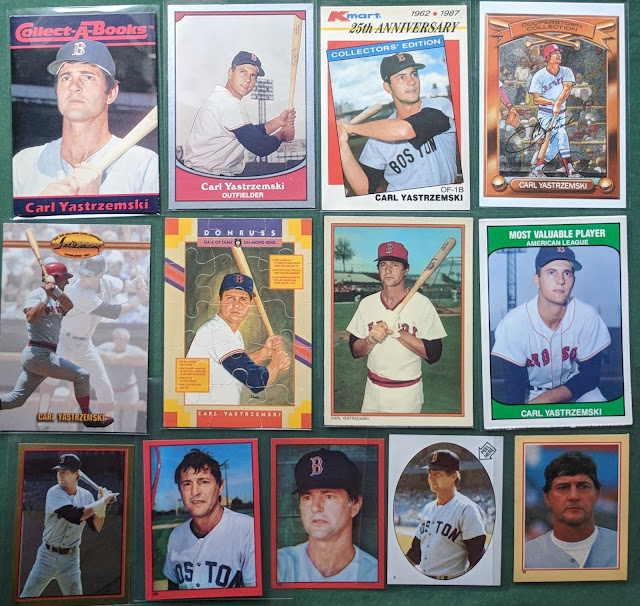 In one of my recent online orders, I snagged a bunch of cheap Yaz oddballs. I collect him plus I trade with several guys who collect him too. So these are headed for the PC, but are not untouchable if trader buddies need any of them. 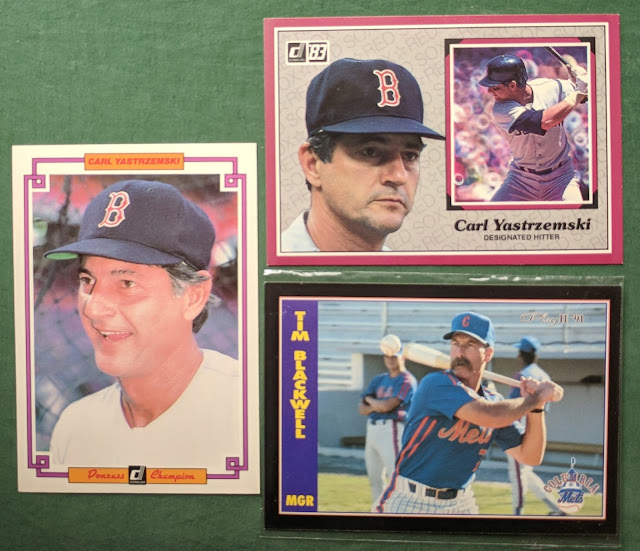 And some oversized cards, including a postcard I neglected to include in my big Tim Blackwell post the other day. For what it's worth, Yaz and Blackwell were teammates in '74 and '75. I think Yaz & the Stache would've been an awesome 70s buddy cop show.

Well, I gotta ma-ma-move. Thanks for reading.