The origins of this one go back to January 2016. Among the flurry of TTM requests I sent out at the time were 3 regarding the beloved 90s film The Sandlot. Sadly for me, I didn't have much luck with them. As I documented in a post a few months later, Mike Vitar (Benny) and Marley Shelton (Wendy) came back as undeliverable, while Art LaFleur (The Babe) just never came back, but I held out hope it might surprise me in my mailbox someday down the line.

It didn't. But fast forward to earlier this month, I got an email from Art LaFleur's wife. She told me they stumbled upon that old blog post of mine, and that my request was never received. I guess the address I used wasn't reliable. But she told me they both got a kick out of the cards.

She offered to give me a better address to use, though asked me not to share it. She also said they'd like to buy a few copies of each card I made so Art could share them with his fans. (Sometimes fans ask Art to sign real Babe Ruth cards, which he is understandably against for moral reasons, as that's not him pictured.. but cards featuring him in character as the Babe wouldn't have that problem.)

As you can imagine, this email totally made my day! I told her I'd be happy to send a bunch of extras free of charge, just hoping to get one each signed and returned. In addition to the two designs had whipped up back in early 2016 (one Babe, and one of Art's character in Field of Dreams), I also set out to make a 3rd card for the occasion. I went with a Goudey design reminiscent of cards from Ruth's playing days. It just came back signed yesterday and I couldn't be happier with it!.. 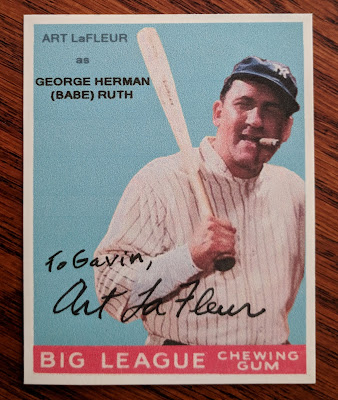 He also kindly signed the older cards I made. 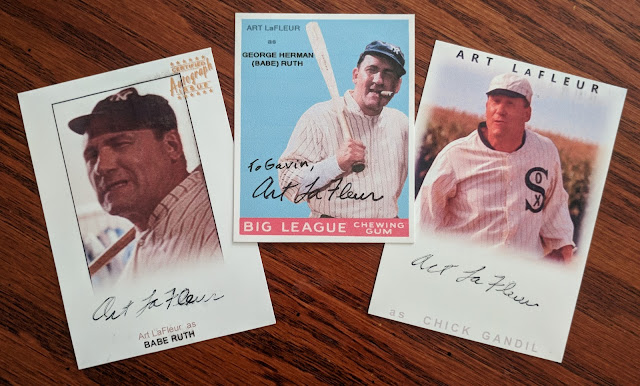 I've had some great returns in my limited TTM activity over the years, but this one might be hard to top.

I love The Sandlot and am excited for 2018 Topps Archives due out in mid August, featuring Sandlot inserts and autos. I'll likely go hard adding those to my small collection of cards from the movie.

Big thanks to the generous Mr. LaFleur and his very kind wife for turning what was a TTM failure into an incredible success!
Posted by defgav at 4:00 PM