I bought game-used pants! And made relic cards with them!

I read a Raz post a while back where he mentioned buying game-used pants of a guy he collects and I half-jokingly made a comment suggesting he should cut them up and make custom relic cards. And that planted the seed that I should do just that! I looked around eBay for game-worn pants of somebody I collect (gotta assume pants are cheaper than jersey tops since they don't display as well; It's not like something you'd frame on your wall). I found a listing for Brian Giles pants that wasn't too outrageously priced, made an offer I was comfortable with, and it was accepted. As a guy who went to my high school (and worked there when I attended), plus later played several years for my hometown Padres, Giles was a great choice for me to feature in a bunch of customs. 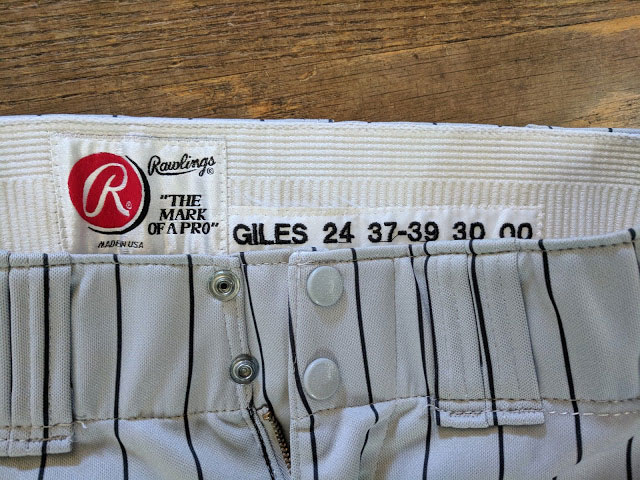 While the pants didn't come with any fancy authentication hologram sticker or anything, I gotta think someone would be crazy to go through the trouble of making fake Brian Giles pants with this much care and detail. A player like Jeter or Trout, maybe. But other than an all-time great like that, just doesn't seem like it'd be worth it to a would-be bootlegging seamstress to make. So I'm convinced they're legit. 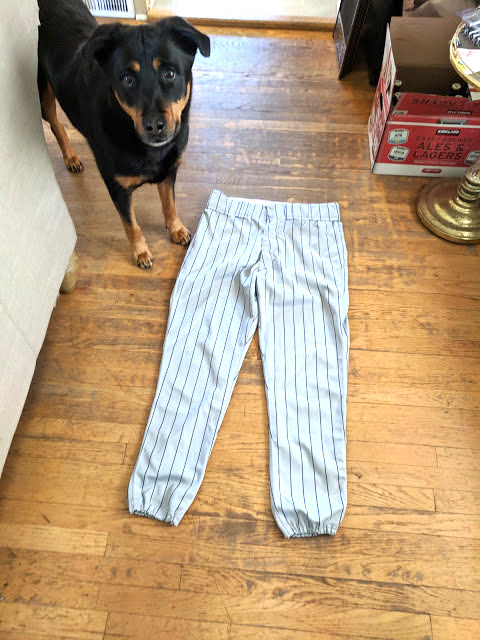 The listing said they were used in a game while Brian was a member of the Pittsburgh Pirates in 2000, but that was the extent of the information provided; no exact date or anything. They don't seem to have any stains, so it's safe to say he didn't steal a base (only 6 on the year) or make any sliding catches in the outfield this day. But the pants have pinstripes, so that's definitely a big plus as far as making interesting memorabilia cards. 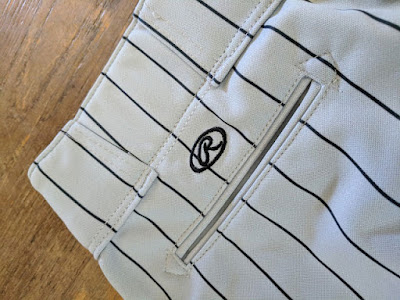 The 2000 season was a good one for Brian, though. He made the All-Star team for the first time, set what would stand as his career-high in RBI, and even got some MVP consideration.

Readers with good memories might recall my post several weeks back where I mentioned I was writing the post while wearing Brian Giles' pants. Yeah, I just wanted to get the feel of them, plus then I could truthfully make the claim that they were "blog-used" at any point down the line if I felt like getting silly with it. Yep, I wore the pants for an hour or so and loved it. I could definitely see considering them regular lounge pants for lazy weekends and whatnot. Almost hated having to cut them up for cards.

But cut them I did. I even worked out a deal with noted Pirates collector and fellow physical customs maker Mark at Battlin' Bucs where I sold him one of the legs to recoup some of my purchase price. That allowed plenty of material for us both to play with.

And now I'm going to show off some of the cards I've made so far. With the exception of rough, tongue-in-cheek "blog-used button" cards I made for some of my trading buddies a couple years ago with an old shirt of mine, I had never attempted to make my own custom relic cards. I'm still in the learning curve, figuring out the best way to go about it all with some trial and error. So while I may feel good about most of the customs I crank out these days, custom relic cards are a whole new ballgame and you'll have to be forgiving if these aren't quite up to the standards you'd expect from real memorabilia cards from Topps, Panini, or Upper Deck. Also, while I'd like to think I'm pretty good at making customs using classic designs, I admit coming up with original card designs of my own has never been my strong suit. So I usually just keep it simple. 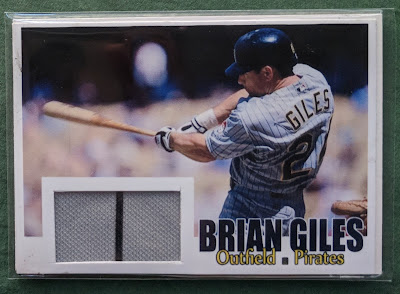 Here's the first card I came up with. Good run-of-the-mill relic card, I'd say. The uniform he's wearing in the photo matches the swatch.. Always a plus. The photo is from 2000, so who knows, there's a chance they might actually be the same pants from the photo.

Now, I didn't want to just make a ton of Pirates relic cards, so I took the liberty of stretching the pants into other settings. Hey, real card companies are known to use a photo from one team with memorabilia that player used while with another team.. so if they can do it, I figure so can I! 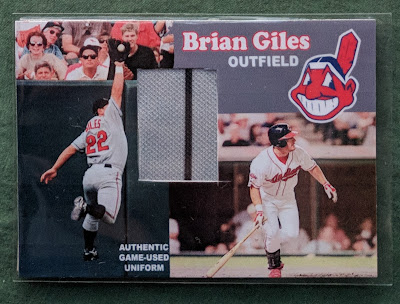 This card goes back to Brian's early days making a name for himself in Cleveland. I gave one of these to TSHenson the other day, the only Indians collector I've traded with lately. I should note the back clarifies the material is from his Pirates days. 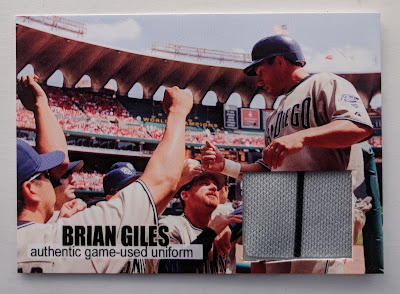 And of course I couldn't leave out my Padres. Cool shot of Brian returning to the dugout after some run-production. 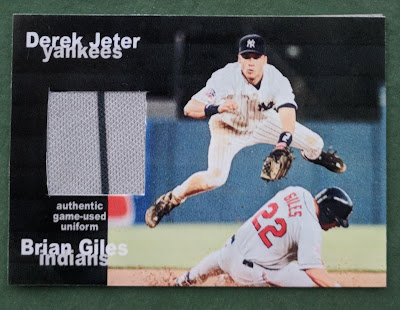 When I found this double play photo from '97, I thought it'd be fun to psych out my Yankees-collecting trade buddies with what would at first seem to be a Jeter relic. But the back of the card makes it clear it's from Giles' trousers, not Jeets' jeans, and mentions the 1997 season when Brian's Indians bested Derek's Yanks for the AL pennant. (Brian had a robust OPS of 1.500 in a losing cause to the Marlins in the World Series that year, BTW.) 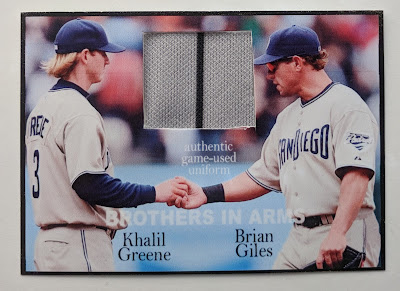 Here's another team-up card. As I mentioned in my last post, Khalil Greene is one of my favorite somewhat obscure guys to collect, so I was happy for the chance to manufacture a new hit to squeeze into that PC, even if it's essentially just a cameo appearance. 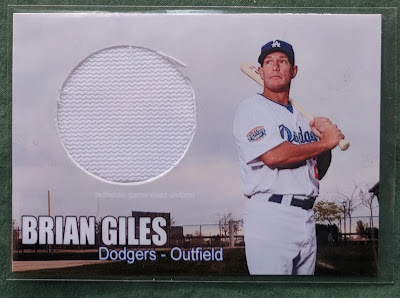 Ok, here's a fun one. This "zero year" card commemorates the brief time Brian spent in the Dodgers organization at the end of his career. He signed with LA in 2010, but ended up retiring early in spring training due to a bum knee. I found this cool posed photo that was perfect for a relic card. I tried something new by making the window a circle instead of a box, but I don't have a big hole punch so I had to do it by hand with a blade tracing a jigger and couldn't get a perfect circle. Whatever; good enough. You're probably saying, "Hey DefGav, that's clearly a plain white swatch, not matching the pants! What the heck?!" Well, first of all, it's "defgav" (no capitalization), and secondly, yeah, I thought the grey with a black stripe would look too jarring on a Dodgers card. But I assure you the material is indeed from the pants in question. Take a guess.

Give up? If you guessed it's from a pocket, you got it. Yes, game-used pocket! I'm glad I could work up a custom relic to give to my Dodger-collecting buddies. And it's nice to have a copy in my collection too, since as far as I know, Brian never got a real card from his brief tenure bleeding Dodger blue.

Coincidentally, Brian's younger brother Marcus Giles also was technically in the Dodgers organization for a hot minute but never played an official game with them. 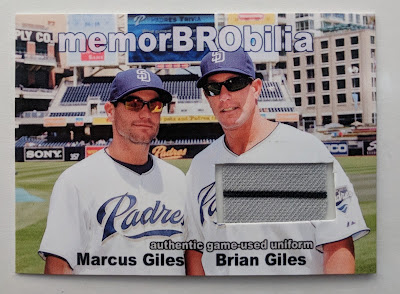 And you know I've got to work Marcus into one of my custom relic cards, since he's another guy I collect, went to school with him, etc. Spiced things up with a horizontal stripe here in this prototype. This "memorBRObilia" card features a nice photo that commemorates the glorious homecoming reunion of the brothers in 2007. Marcus had a down year and was out of MLB after that, which is too bad, but still a sweet story of brothers playing together for their hometown team.

That's all I've whipped up at the moment. The plan is to make a few copies of each design: one for me, and probably like 3 or 4 more to throw in with trades. I've still got about half of the pants left-- a ton of material left to play with-- so I'll likely come up with more designs in the future. And once I feel comfortable making relic cards that I'm happy with, quality-wise, I'll tackle making fancy cards, like with the buttons and tags. But no rush there.

Any feedback on my attempts at making custom relics? Let me know what you think!
Posted by defgav at 3:21 PM