Earlier this week, I featured some highlights I got from Fan O' Freds Nachos Grande's 2015 Heritage group break. Chris also threw in a 2004 Topps Clubhouse Collection box to beef up the break. And I'm very glad he did, as I ended up with 4 great bonus hits in my haul.

Off the top of my head, I'm not sure if I had a Gwynn bat relic before this beauty. I know I've got 3 or 4 jersey relics, but don't think I had a wood chip. So this is a very cool addition to my collection, rounding out my Gwynn PC nicely. 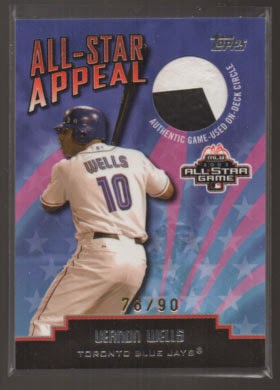 A game-used on-deck circle relic! Never heard of such a thing! It features Vernon Wells and is #'d /90. The back states it was used in the 2003 All-Star game. And I don't think each player got his very own on-deck circle, so this relic could essentially be considered a relic of all 2003 American League All-Stars, right?  Ichiro stood on it! Edgar Martinez, A-Rod, Hideki Matsui, Carlos Delgado, Posada-- that's some sick early '00s mojo right there. 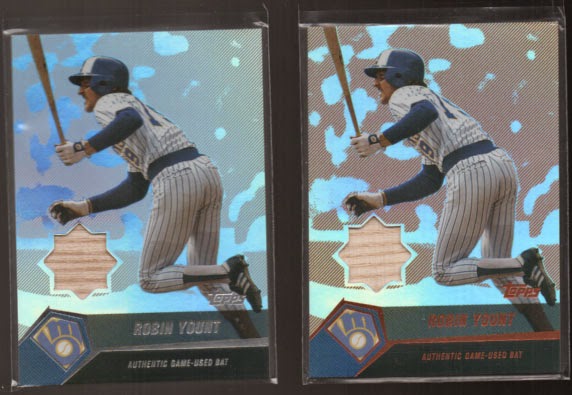 And then not 1, but 2(!) Robin Yount bat relics. The one on the right is a parallel #'d 84/99. While I usually funnel most of my Brewers cards to Tony L., I'll try to hang onto at least one of these for my meager Yount PC. (Please tell me you already have at least one of these cards, Tony!) 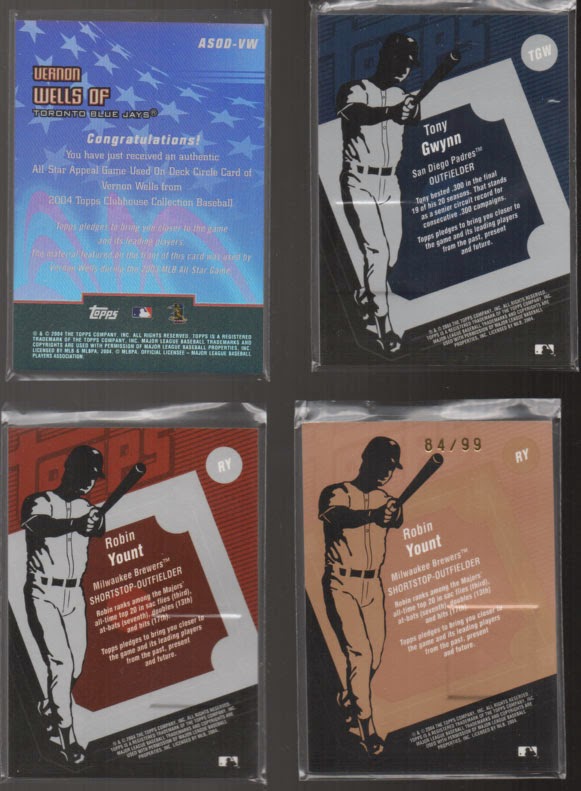 Here are the backs in case you want to see them. 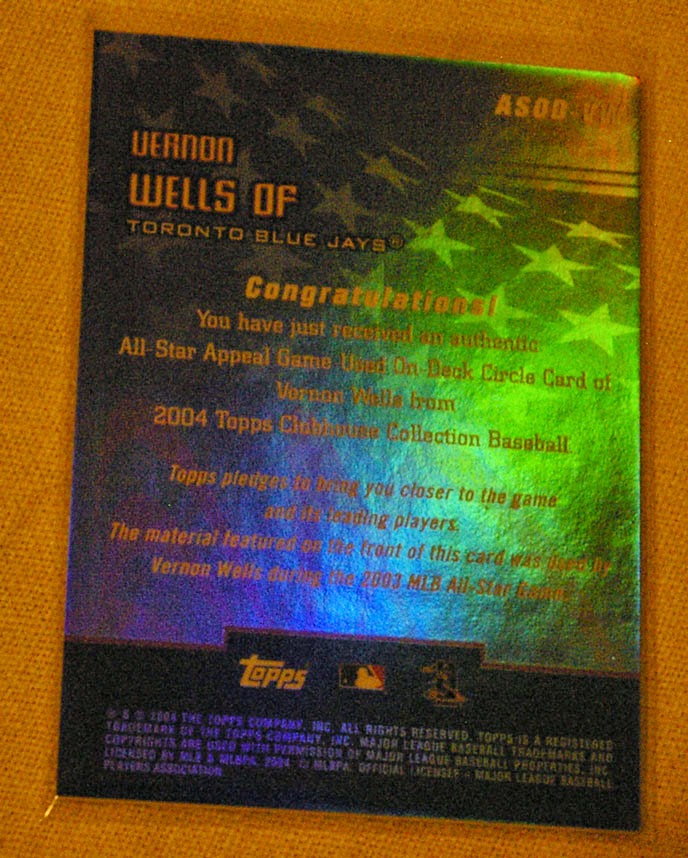 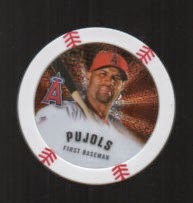 For fun little bonuses, Chris also threw in a few low-end packs to rip in the break. Among the junk, I ended up with a Fred Lynn 91 Donruss I think I needed. The Pujols chip was nice, too, though I'm kinda glad Chipz aren't returning in 2015.


--
Hopefully he's received it in the mail by now, so I'm not spoiling anything, but I wanted to share this little "thanks for the break" gift I sent Chris a few days ago: 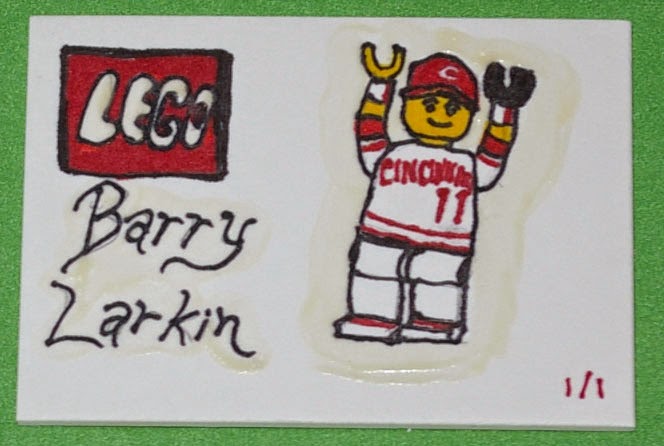 LEGO® stuff and Barry Larkin cards are both atop his collecting list, so I thought I'd get cute and combine them on a sketch card. I didn't have much in the way of cards on his wantlist, so whipping up a special "1 of 1" was my next best bet for an easy yet thoughtful gift. Not my best artistic work, but it came out fine by my standards. And even though Chris is historically unimpressed by glow-in-the-dark cards ("I don't think there's any good reason to have glow-in-the-dark baseball cards" --A blasphemous statement to me! but to each their own.), I had to stand by my core values and make the card glow regardless. 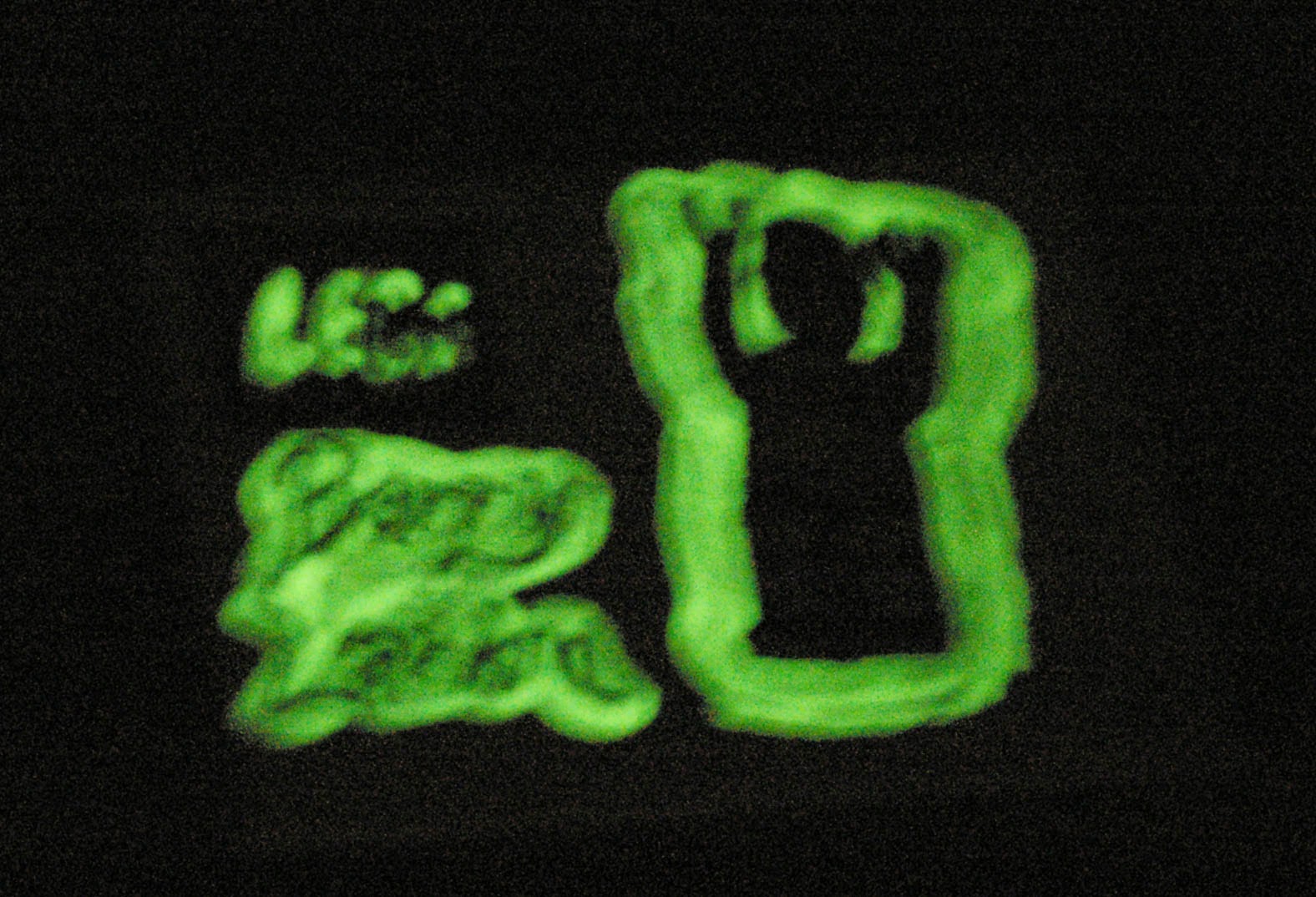 Thanks again for the fun break and great cards, Chris!
Posted by defgav at 3:50 PM