I've definitely ripped my share of wax/foil in my time, earning the reputation of a "hitless wonder" in the process. But I just finally hit my first non-promised auto (meaning, not from a "2 autos per box!" type situation, but rather a good ol' luck of the draw).

I hadn't busted any packs in a while, so I found a couple cheap (blaster-priced) hobby boxes off eBay recently for my fix: '98 Bowman (Series 2) and '99 Bowman (Series 1). I don't have much from either of these sets in my collection, so I in addition to the fun of tearing open packs, figured I could probably pull a few PC guys, and replenish my trade box a bit. (If you trade with me sometime in the next several weeks, expect to get some late '90s Bowman thrown in as filler.)

But yeah, about halfway through the '98 box I pulled this guy: 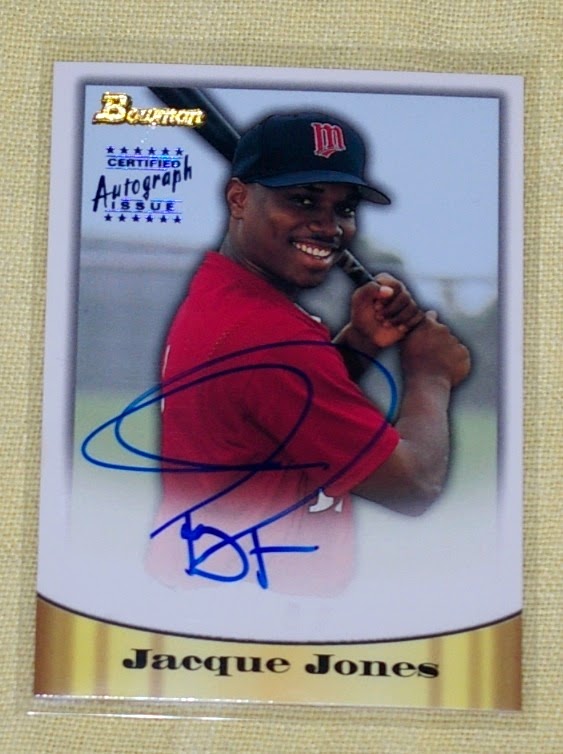 An autograph! Jacque Jones. Sure, not a huge name, but we're talking Bowman here, where much of the auto checklist is guys who never actually do squat in the majors. So to pull a guy who went on to have a very respectable career is pretty sweet. And while I don't expect this card to be worth more than about 3 bucks, it must be a reasonably tough pull because I can't find any copies currently for sale on eBay or COMC. According to the odds on the wrapper, autos are seeded 1:102 packs, so one in 4.25 hobby boxes.

Anyways, that was a fun thrill to finally pull an auto. It's a nice-looking card with bold, on-card autograph, and I'm happy to add it to my collection. Jacque gets bonus points for being a fellow San Diego boy, three years ahead of me across town (San Diego High School).

Stay tuned for the rest of the notable cards from the box in a future post.
Posted by defgav at 3:59 PM