Finding another vintage guy to collect

I've said it before, as a Padres fan, I'm limited in chasing really old cards that I can shoehorn into my "collecting focus" or whatever (not that I'm much of a stickler about that). Ted Williams, Jerry Coleman, Dick Williams are my go-to oldies with tangential ties to San Diego baseball. I didn't realize until he passed away, but Minnie Miñoso was a PCL Padre like Ted Williams. He should eventually be inducted into the HOF and therefore become a part of my "Pads in the Hall" minicollection (incredibly unfortunate that Hall voters didn't get in him while he was alive to appreciate it.) so I need to put him on my wantlist. Update: and Flip Rosen, too! 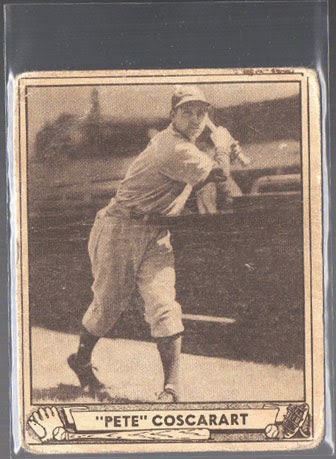 His claim to fame (at least in my eyes)? Pete was the first alumnus from my alma mater, San Diego State University, to play major league baseball. I'm not really a college sports guy, but as my Guys From Granite series shows, I do like showing some love to ballplayers who walked down the very same halls as me in my younger days. I don't blanketly collect SDSU alumni, but have a few dudes I like (such as Marshall Faulk, Stephen Strasburg, Graig Nettles, [Tony Gwynn doesn't really count because I'd collect him anyway]).

And thanks to giving me an excuse to bring a vintage Play Ball card or two into my collection, Pete Coscarart is now a guy I collect. He gets bonus posts for also being a long-time PCL Padre (1946-1949) later in his career, plus he played a lot in my current home of Portland, OR in his early days. He split his time in the majors between the Brooklyn Dodgers (1938-1941) and Pittsburgh Pirates (1942-1946) as a middle infielder. He got a tiny bit of MVP consideration in 1939, and was an All-Star in 1940. It was said he was run out of the majors in part thanks to his outspoken support for forming a players' union. He later became a scout, signing the aforementioned Graig Nettles for the Twins. In 1996, Coscarart was inducted into the Brooklyn Dodgers Hall of Fame. 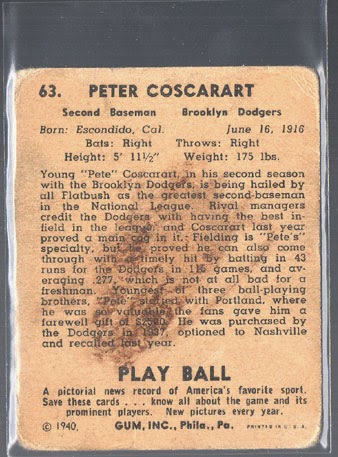 This beat-up 1940 Play Ball card ran me just a couple bucks plus shipping. Looks like a former owner of this card was a fan of Fudgesicles.

Here's a somewhat complete checklist of his cards:

I don't own any vintage PCL Padres cards, so it looks like I've got a couple to keep an eye out for now. But 1949 Bowman PCL cards sell for around $200 a pop, so I've settled for a reprint for now: 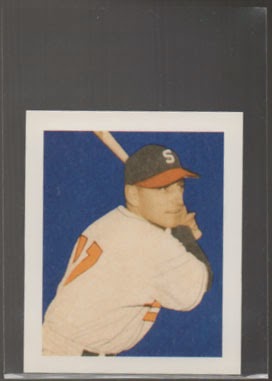 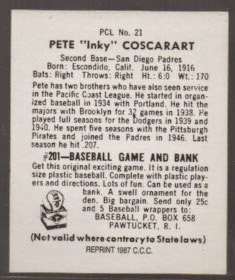 (I actually went ahead and bought a near-complete reprint set of '49 Bowman PCL since I was able to get a Best Offer accepted for just a little more than a Padres team set would have cost me. The rest are available for trades.)

So yeah, in the very slim chance you've got a Pete Coscarart card sitting in your tradebox, please get in touch and let me trade you for it. (Maybe you Dodgers or Pirates collectors have a dupe or two available?) While it's not a huge priority, I'd love to whittle down those cards into my collection over time.
Posted by defgav at 4:36 PM