A few weeks ago in a trade post showing some cards from Bob Walk The Plank, I insinuated Matt was robbed in the "most generous blogger" award that Jaybarkerfan's Junk won. Of course that was all a ruse to have Wes aggressively bomb my mailbox with cards to prove himself as the undisputed king of generosity.

It worked! Perhaps a bit too well! (Because now I have to try to reciprocate with a respectable return package! It won't be easy.)

This big-ass Priority Mail box landed on my doorstep the other day: 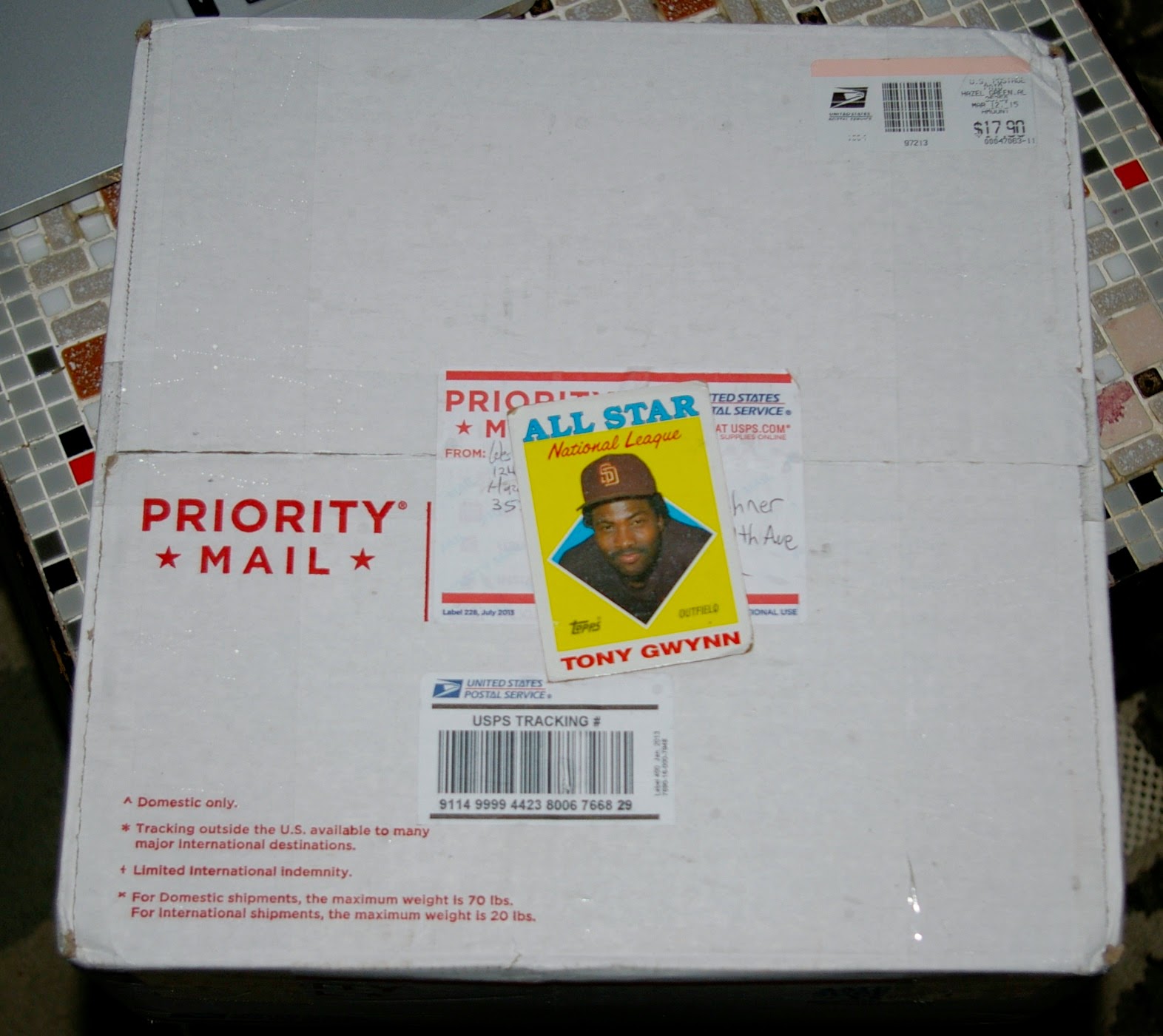 Daaaayaaaaaumn!
This is obviously one of those trade packages that could easily justify a week of posts, I'm going to try to cram it all into this one.

Julio Franco was the king of the box, with around 30 cards. Very nice. 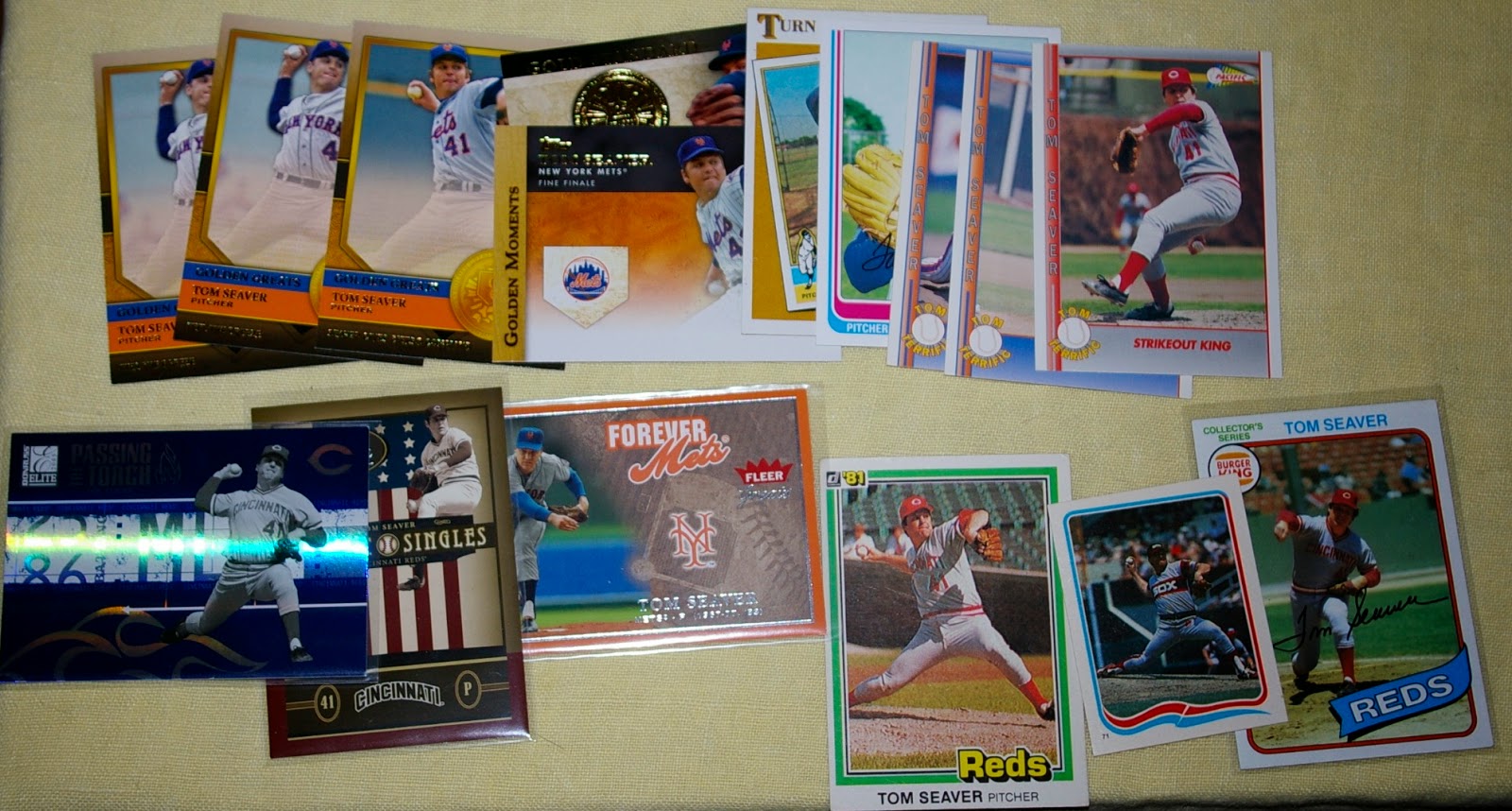 Runner up was Tom Seaver. I never knew Seaver had his own Pacific set (upper right) like the Nolan Ryan set. 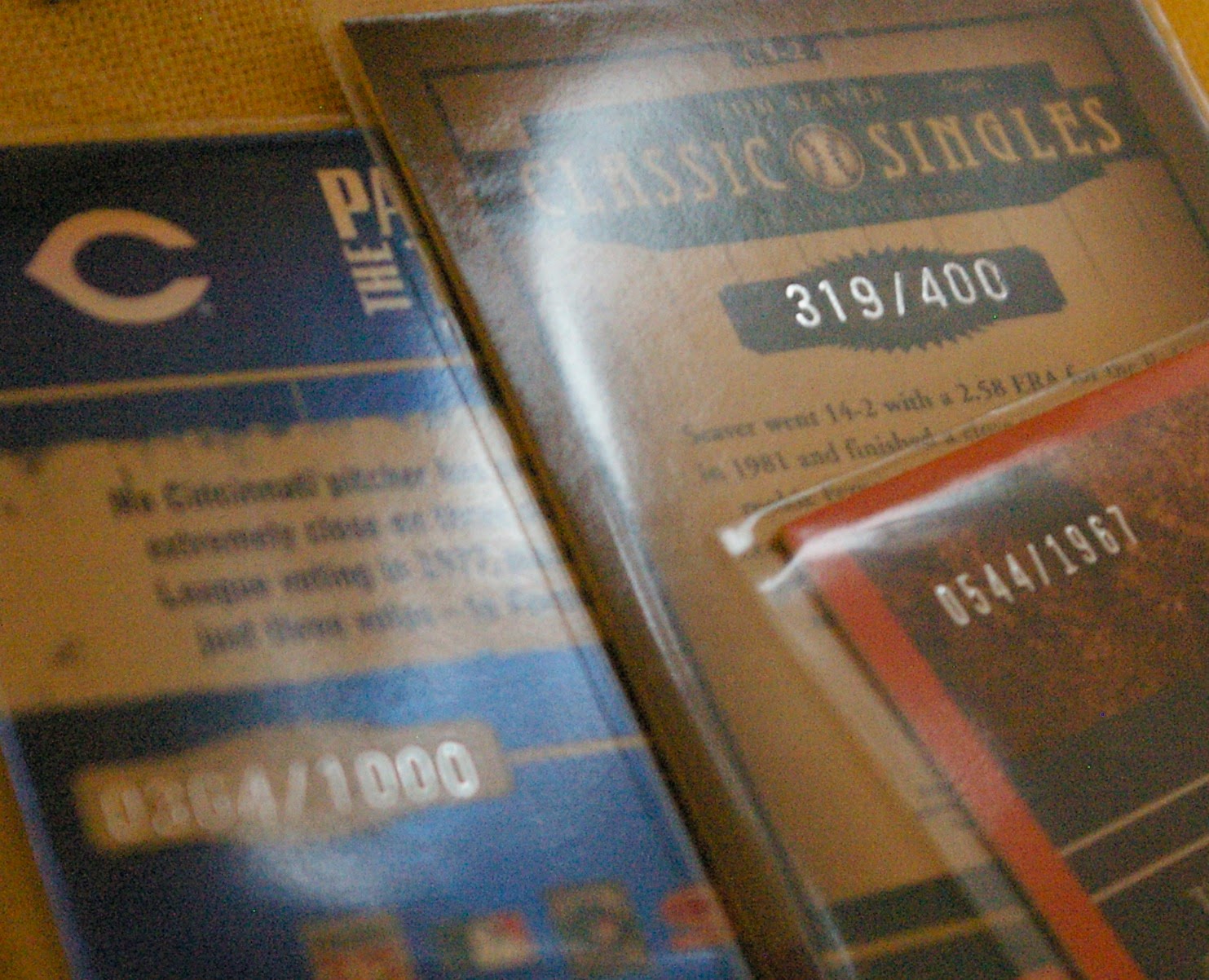 I'm a sucker for a serial number, and 3 of the Seavers got numbers lovingly stamped on the back. 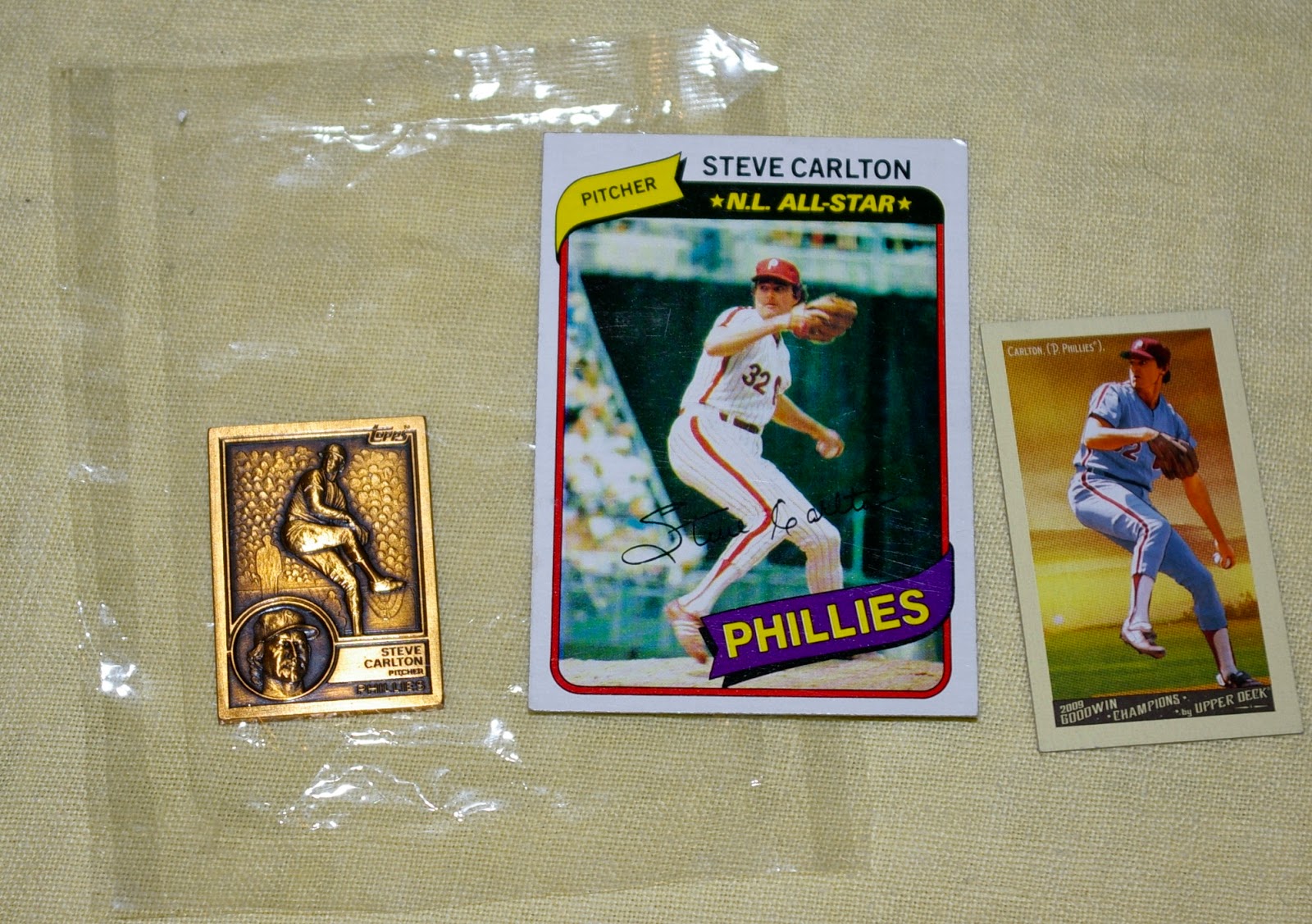 Some nice Steve Carlton cards, including a bronze Gallery of Champions mini. This neat little item is my first one of these things. It's nice to know that if my house burned down, at least one card in my collection would have a fighting chance of surviving.

Here are some more odd-sized oddballs. I still need to check if I've got any of those pop-ups already. Because if I do, you can bet I'm poppin' those dupes up. 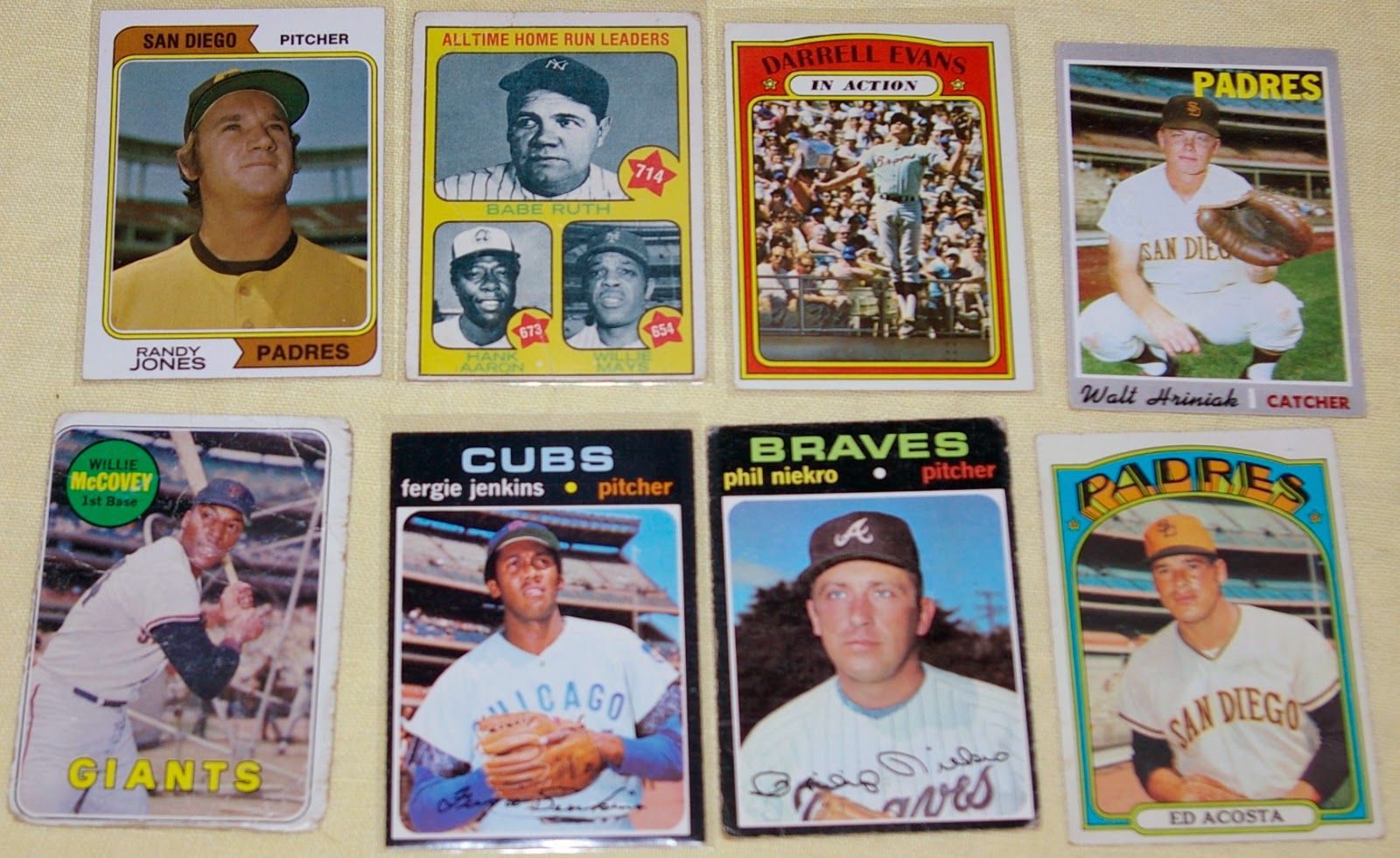 A nice selection of vintage. Very happy to add the Randy Jones rookie to my PC. The 1973 #1 all-time HR leaders card is a beaut. Not quite an upgrade to the copy in my 73 Topps setbuild, so it'll be a nice addition to my Hank Aaron PC. The '69 McCovey will also make a great PC addition, even with it being pretty beat-up. The 71s are probably upgrades for the set I'm working on.

Some vintage football! I gotta confess I'm not much of a Chargers historian-- I could only name a small handful of pre-90s players-- so I'm not familiar with these guys, but I love the old cards all the same. 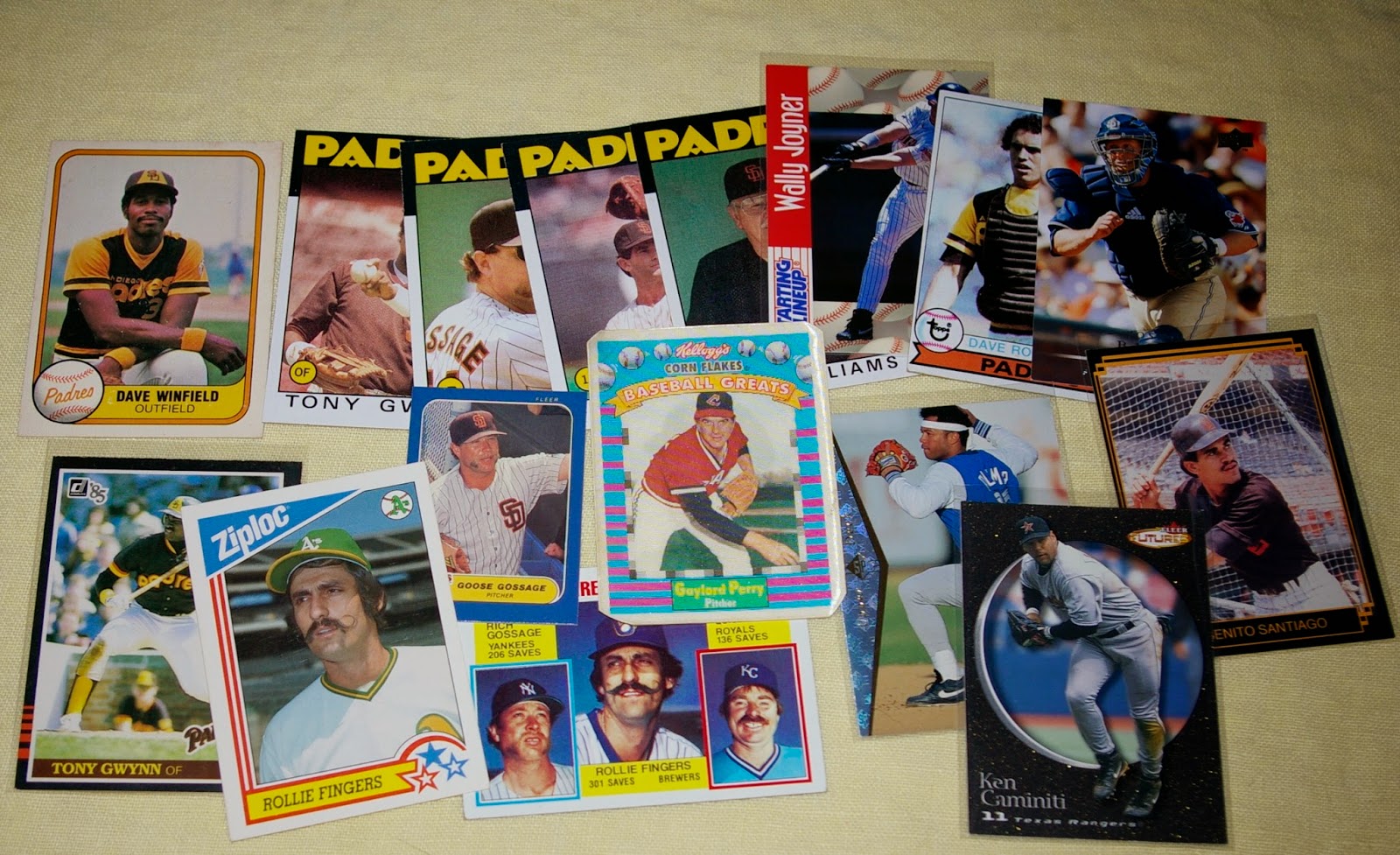 A big lot of Padres and once-a-Padres. I especially like that Caminiti card. 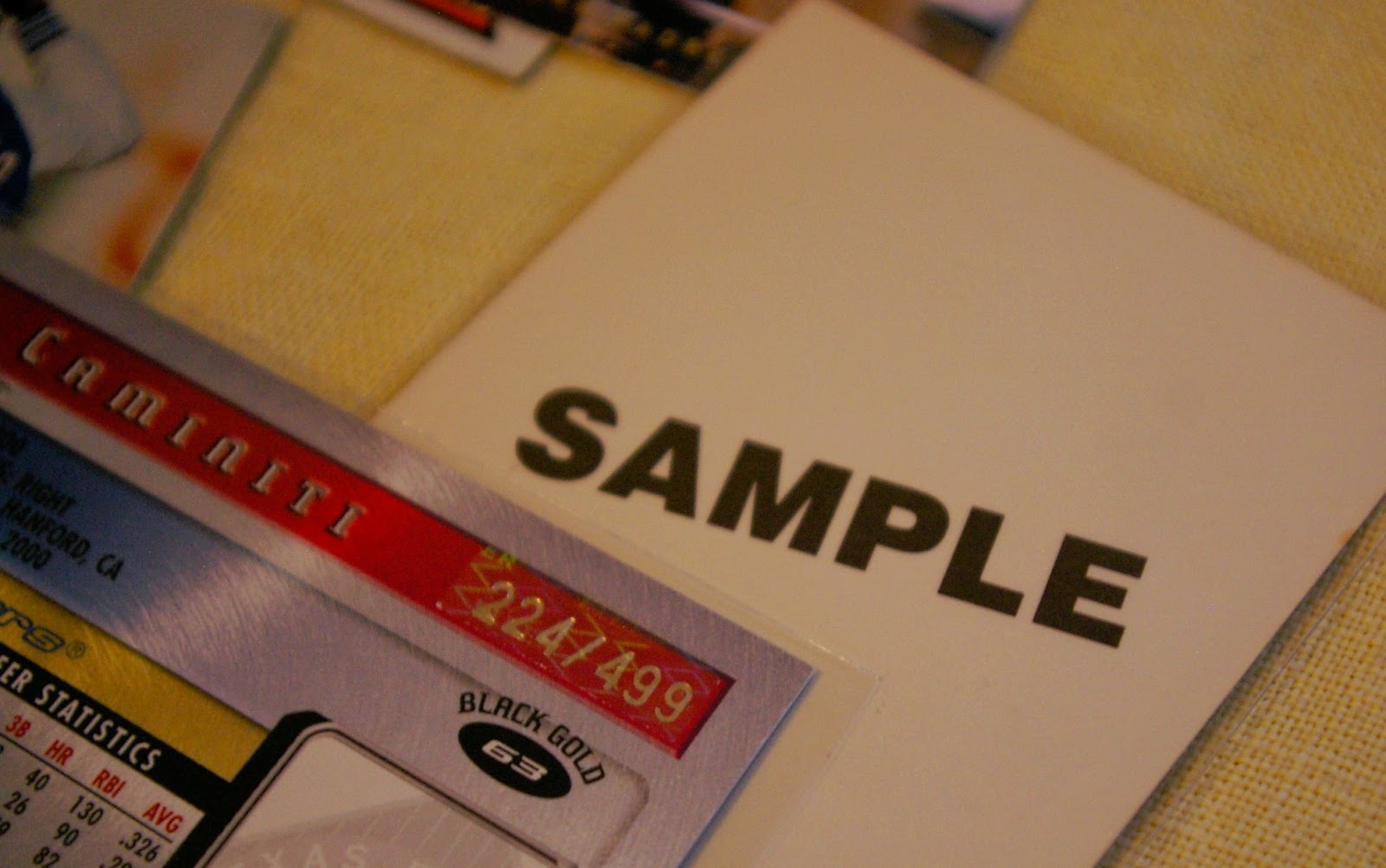 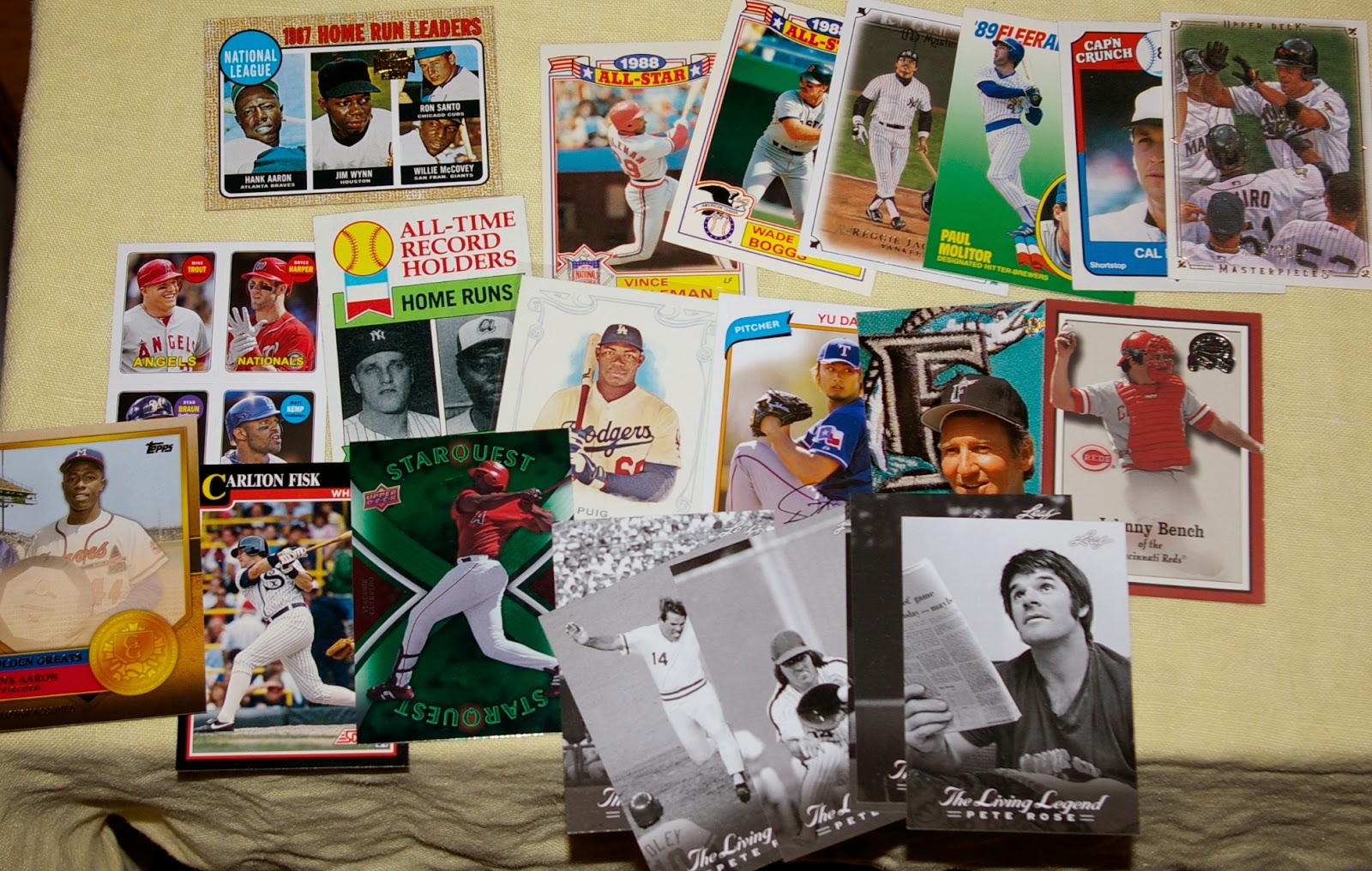 Here are more cool cards grouped together for no particular reason. Among the highlights are Puig A&G RC and a '79 Maris/Aaron. 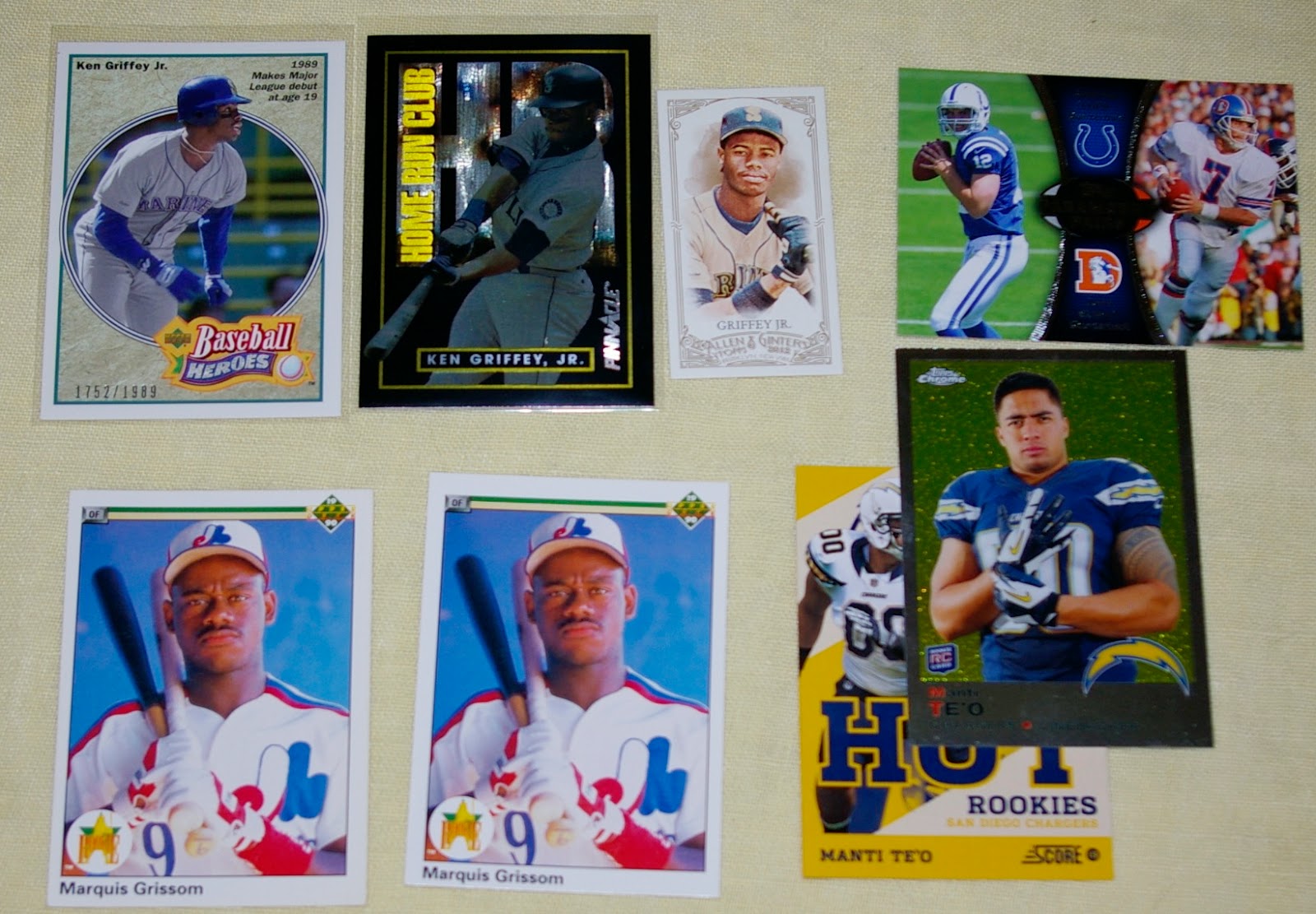 The cardboard onslaught continues with some awesome Griffeys, a couple 1990 UD Grissoms (up to 313 now!), and some modern football. 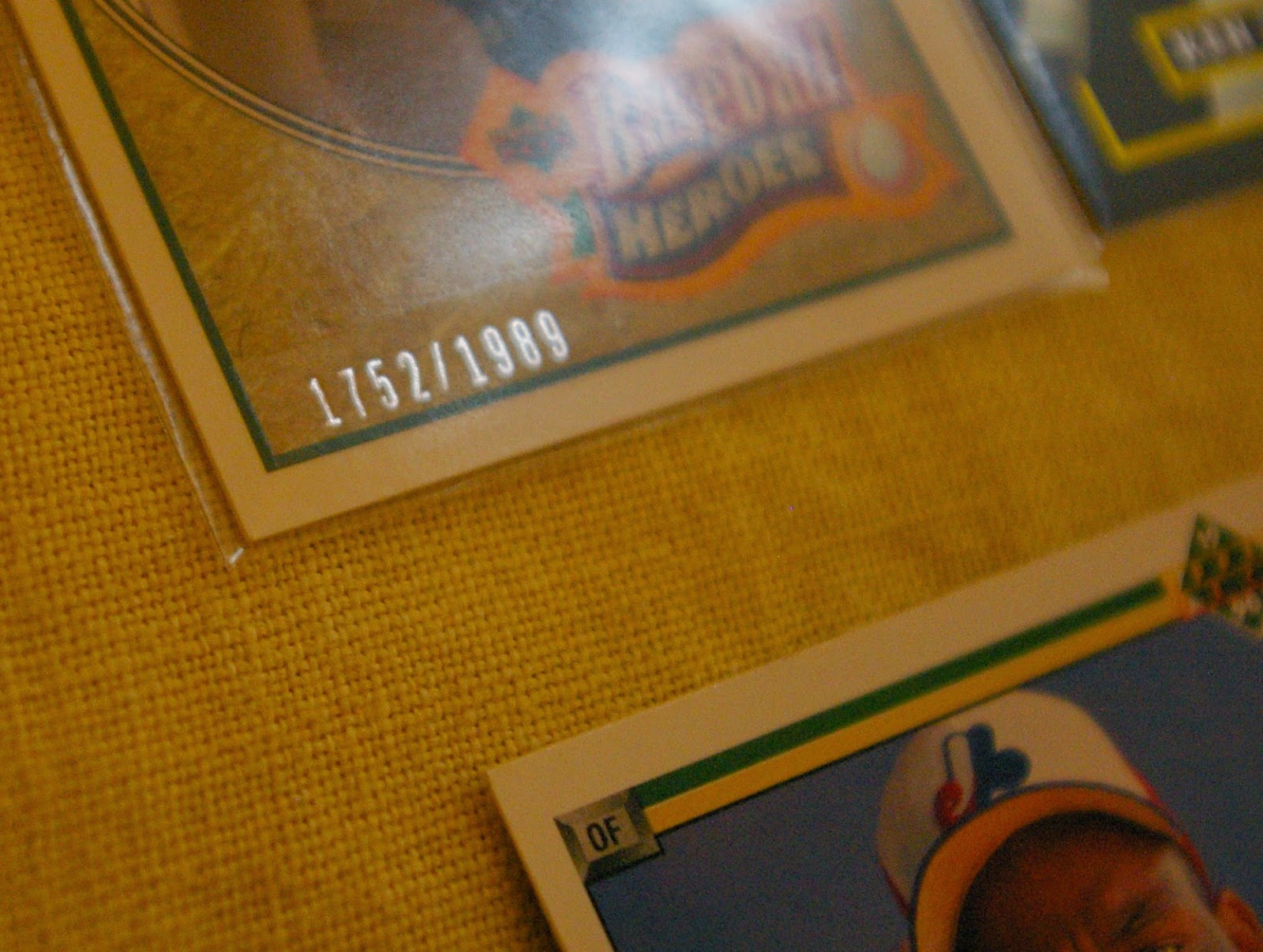 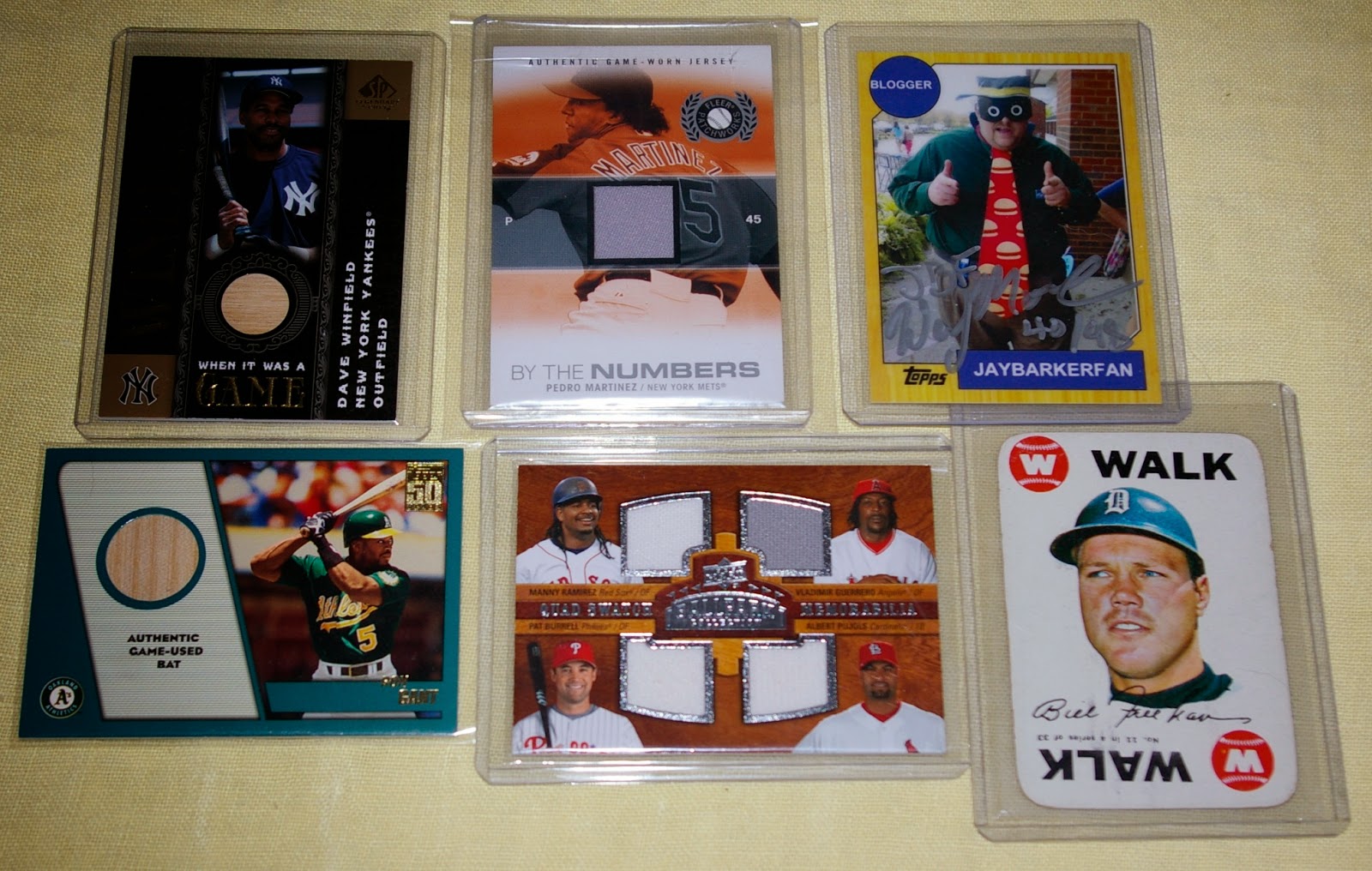 And the hits: Winfield bat! Pedro jersey! Jaybarkerfan auto! Ron Gant bat! quad relic! and a Bill Freehan 1968 game card! (maybe not technically a "hit," but found its way into this picture). Before the day this package arrived, I'm pretty sure I didn't own a quad relic. Coincidentally, the same day this arrived, I got another one from the same set (different players) from an eBay win. I'll have to show that off another day. As for this one, it's got Manny, Pat Burrell, Vlad, and Pujols. Not a bad group of players! Over 1800 homers between the four.

So that does it for the loose cards, but I failed in trying to get everything crammed into one post because the big ol' box had some more neat stuff in it that I'll just have to cover in an upcoming post.