My trade posts are in danger of slipping out of hand, so here's a big post showing off cards from a few recent (and less recent) trades.

First off is JBF Wes. He's running a big trade-a-thon to net himself a bunch of card packages to stockpile then open on his impending vacation. That's a great idea! What better way to take a vacation to "epic" status than to drown yourself in new cards lovingly sent to you. So anyways, I sent him some cards and these are the 3 that I asked for in return:

A pretty Joey Gallo mini #'d /99. He's had some exciting moments this year, though he has since cooled off, currently sub-Mendoza in AAA. 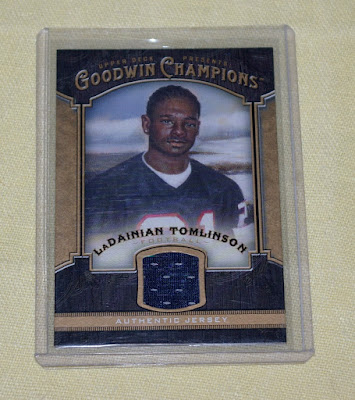 My first LaDainian Tomlinson relic! This helps round out that PC nicely. 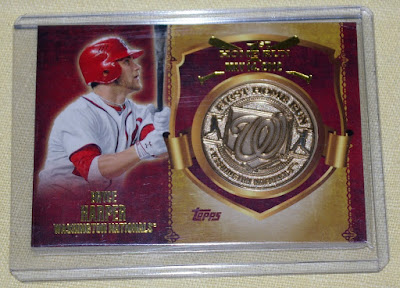 Next up is a nice package from Bo. 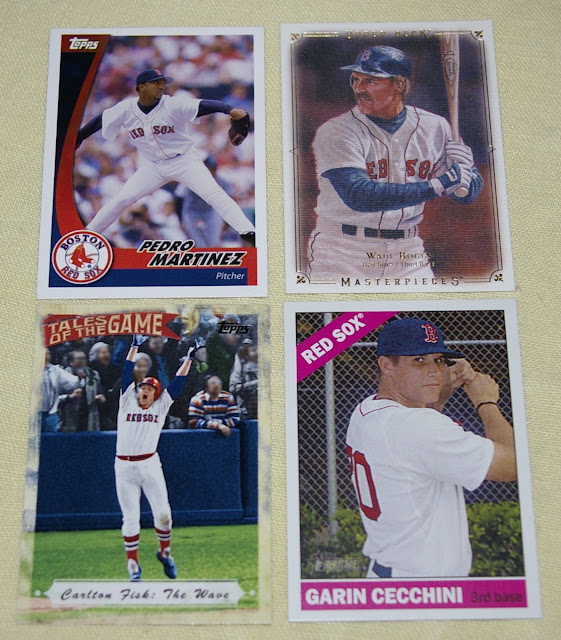 Here's a quartet of quality Sox. I think that's my first solo card of Garin Cecchini, the lesser-named of the Cecchini brothers, but still ok. 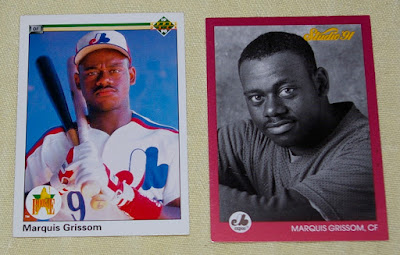 A 1990 UD Marquis Grissom! That's always considered a "hit" in a trade package with me. Bo told me he kept getting bunches of '90 UD in the boxes he bought of his guy on the street. Seems the guy broke up the set and would stuff in a few at a time. Finally in the very last box there was a Grissom! That card sparked Bo to round up a few more cards and send them to me. 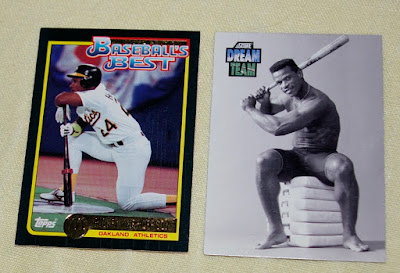 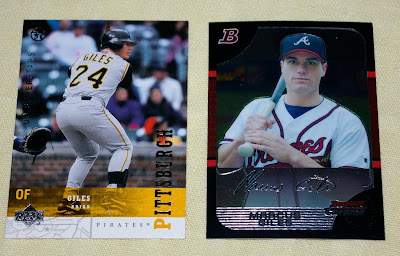 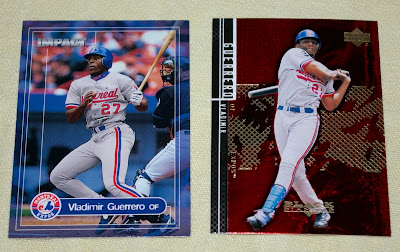 Vlad. That guy was a beast in his prime. Apparently he crushed it at the recent All-Star celebrity game. It's a crime he had to retire when nobody offered him a major league contract. Fucking collusion, if you ask me. I have no doubt he'd be right there today along with Arod, LaTroy, Ichiro, and Bartolo under the "old guys still gettin' it done" label. 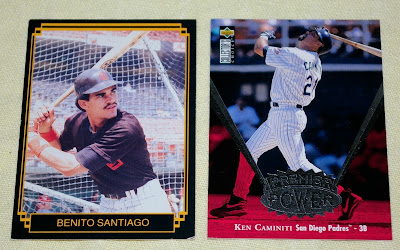 Here are a couple Padres. It's funny, I think I've gotten 3 of those Benito "SAMPLE" cards (the back is blank except for the word "SAMPLE" across it) in the past year. They must've made a shitton of samples! Seems most "sample" cards like that never actually get produced (as non-samples). Just a gimmick to hand out at card shows, I guess. Still, it's a fine card. I like the Caminiti too. Don't think I had that one. 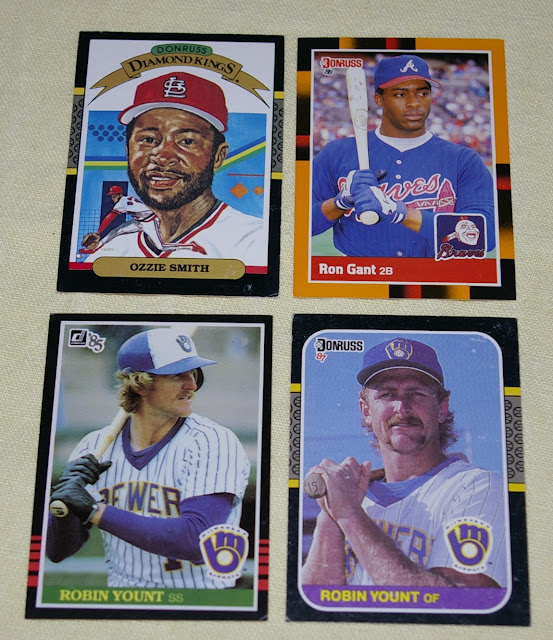 Bo's package finishes up with some Donruss. Love that Gant swapping orange for the familiar blue in the '88 design.. must be from a traded/update/highlights/whatever set I'm not familiar with.

Next is a lot of Baseball Card Magazine cards from Tony L. He actually sent me these like three months ago, but shortly after, he told me he had some Reggies to send me, and then later, a bunch of penny sleeves he didn't need.. and I just held off figuring I'd do one big Tony L. post instead of 2 or 3 smaller ones. But I guess we got into a trader standoff where each guy has cards to send but is waiting for the other guy. Haha. So enough waiting, here are some cool oddballs cut out of magazines: 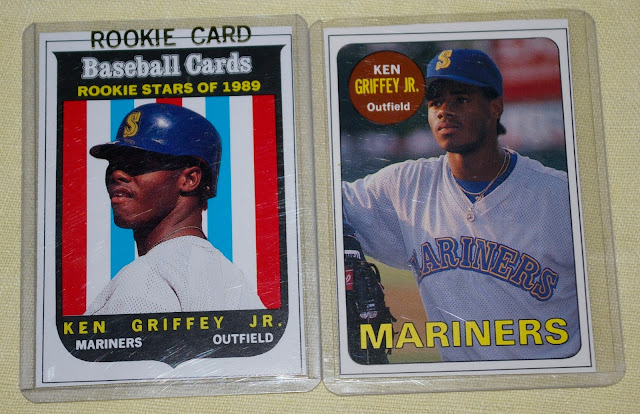 I was surprised nobody else jumped on the Junior cards Tony offered up. I was happy to take them off his hands. 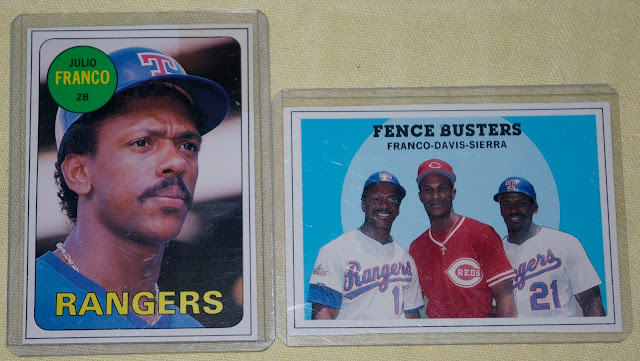 My Julio Franco PC is looking pretty good these days. Like Vlad, I bet Julio could still be a viable bat off the bench for a big league club today. 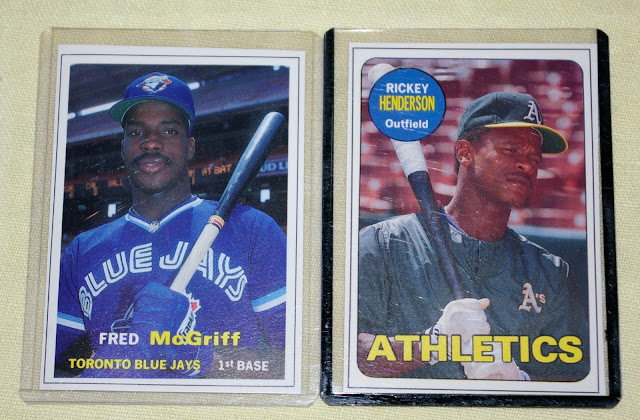 A couple guys with brief, beautiful stays in San Diego. 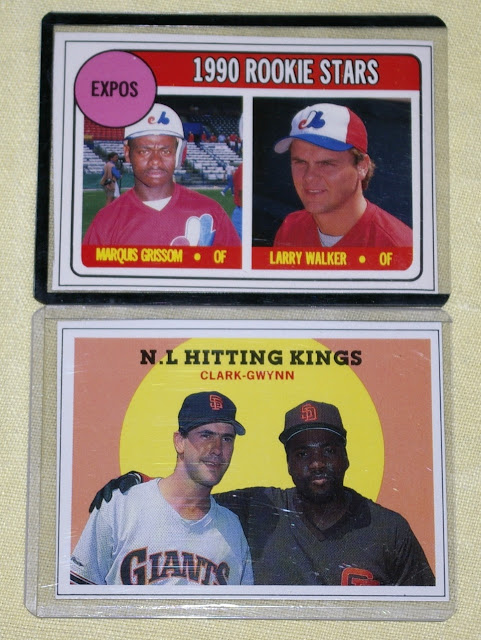 I already had that Grissom/Walker card.. but since I PC both those guys, I was happy for the dupe.
And I love the Gwynn card, even with Will Clark clogging it up. lol

And here are some Griffeys that were part of the trade package from Adam E (the Mariners fan, not the Red Sox fan) that I forgot to include in that trade post a couple weeks ago: 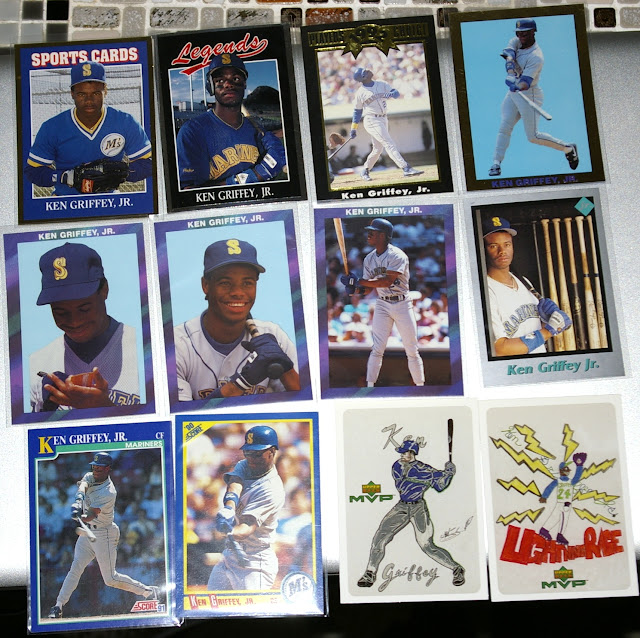 Some great oddballs in there I'd never seen before.

One last photo for today: 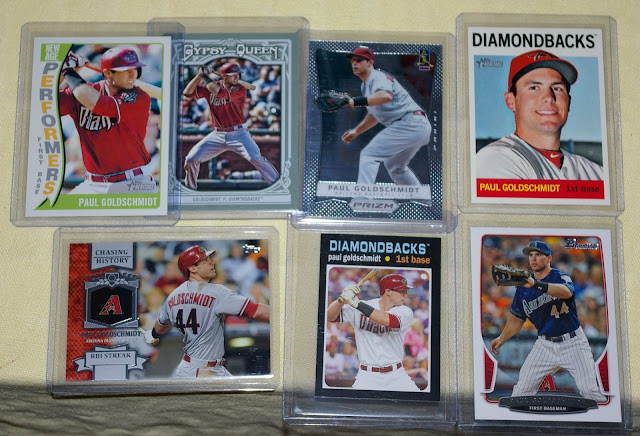 These were some of Daniel Wilson's Goldschmidt dupes that he sent me a few months ago. I showed the rest of the cards Daniel sent back then, but held off on the Goldys because I was planning a big post showing off my entire PC which I probably would have titled "My Goldschmidt Don't Stink" or a similar bad pun. But I haven't gotten around to that yet, so nevermind.

Very big thanks to Wes, Bo, Tony L, Adam, and Daniel for all the great cards!

Ok, that wraps it up.

- Have you sent me cards a while ago that I have not featured on my blog yet? Please let me know! Maybe I forgot about it or they never arrived.

- Are you expecting cards from me that haven't arrived and it's been a while now? Please let me know! Maybe I forgot about it or they got lost in the mail. (I've had 2 or 3 recent Listia sales disappear in the mail.)

Here's my internal recordkeeping as of today: