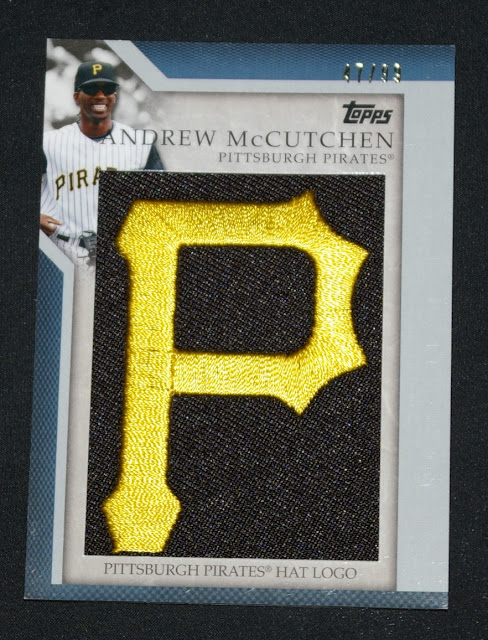 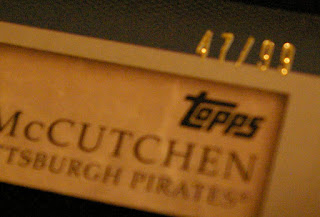 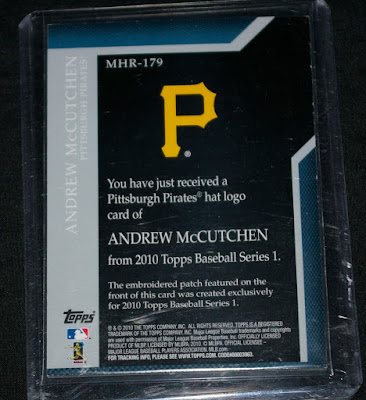 This gets the award for card most quickly thrown onto my stack. A McCutchen hit #'d /99 for less than a buck? Yes please! One of these recently sold on eBay for $12.50.
The manufactured "hat logo" looks pretty sharp. Sure, it'd be way cooler if it were from a game-worn hat, but still. Part of me would love to send this to Matthew Scott, but think I'll gotta keep it in my modest little McCutchen McCollection. I've got plenty of other Pirate cards stockpiled for Matt anyways. 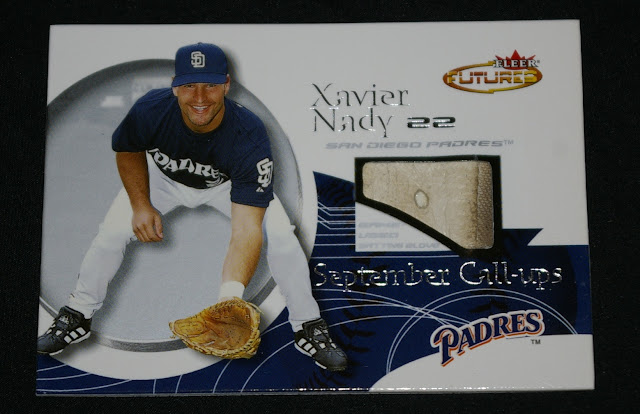 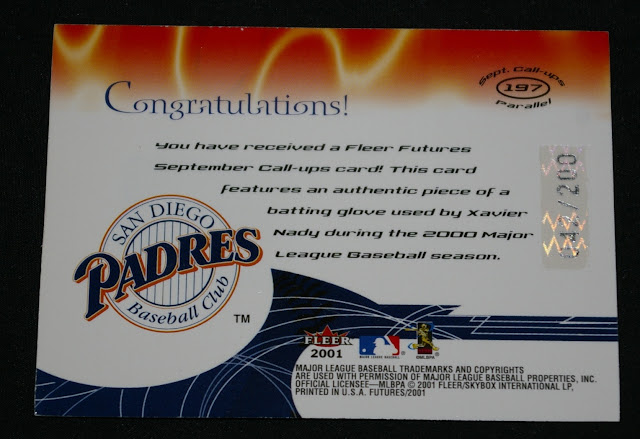 Here's another card I was very excited to pick up. It's my first batting glove relic. For the price, I would have bought this card regardless of the player, so it was a nice bonus that it's a guy I like from my hometown team. Xavier Nady never quite delivered on his potential, but managed to grind out a long career, debuting in 2000 and retiring after the 2014 season (in which he double-dipped with the Padres). Looks like he spent 2015 as hitting coach for the Lake Elsinore Storm, Single A affiliate of the Padres. Nady only got one MLB plate appearance in 2000, so I'm skeptical this piece of batting glove was from that solitary at-bat (he hit a single, btw), but was more likely from batting practice. It's a nice card, #'d 42/200, though given the nature of the relic, the defensive pose doesn't really fit. That's the biggest smile I ever recall seeing from the normally stoic Xavier. 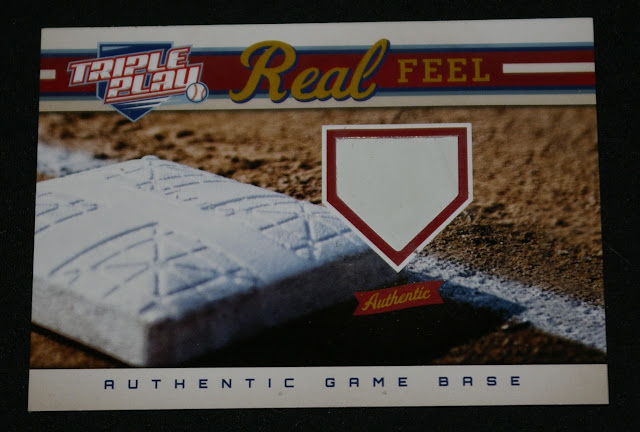 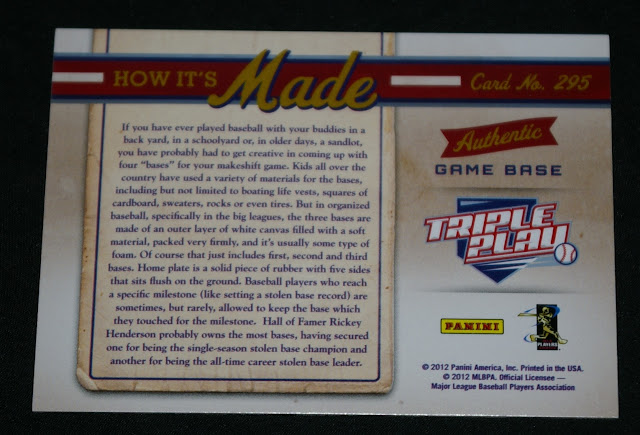 This is my second relic featuring a piece of a base. Like the other one I showed off last time, this one isn't game-used either. My quest for a game-used base relic remains ongoing! This one is a generic relic from Triple Play, where Panini apparently just bought some baseball gear at Dick's Sporting Goods or someplace like that and cut them up to put into cards. Kind of silly, but I guess it's a neat idea for adding hits to a cheap product aimed at kids. 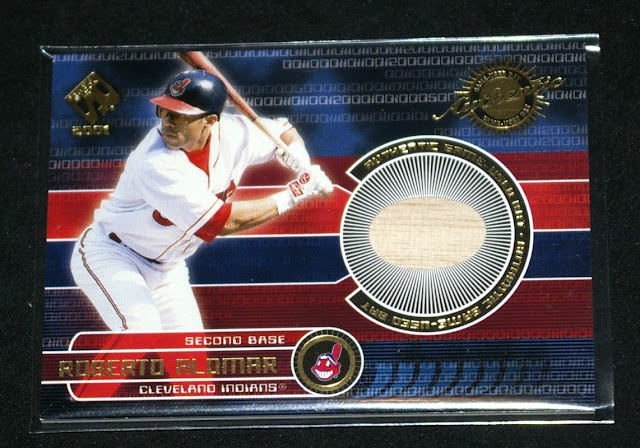 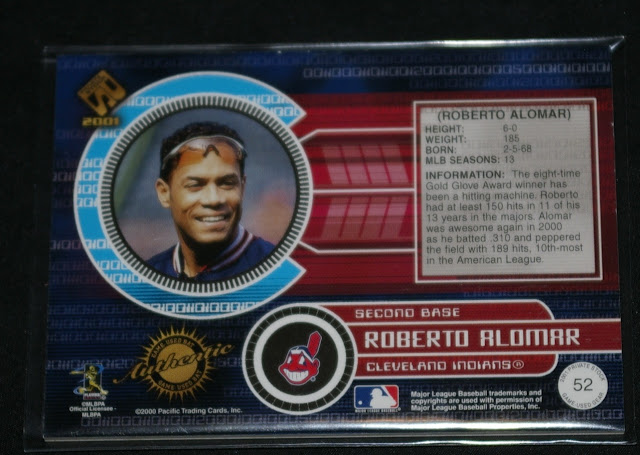 Finally, here's a boring bat chip, but in the interest of completeness and my goal to reach 100 "things" in cards, I need a bat relic in my Ridic Relics minicollection, so let's count this one. Again, for less than a buck, I was happy to add a hit of a HOFer.


Now onto the 600th Post contest stuff. The entry period is now over.. thanks to everyone who entered!

Now let's randomize once to assign numbers. Let's say the winning number is the total number of hits in Game 1 of the 2015 World Series. 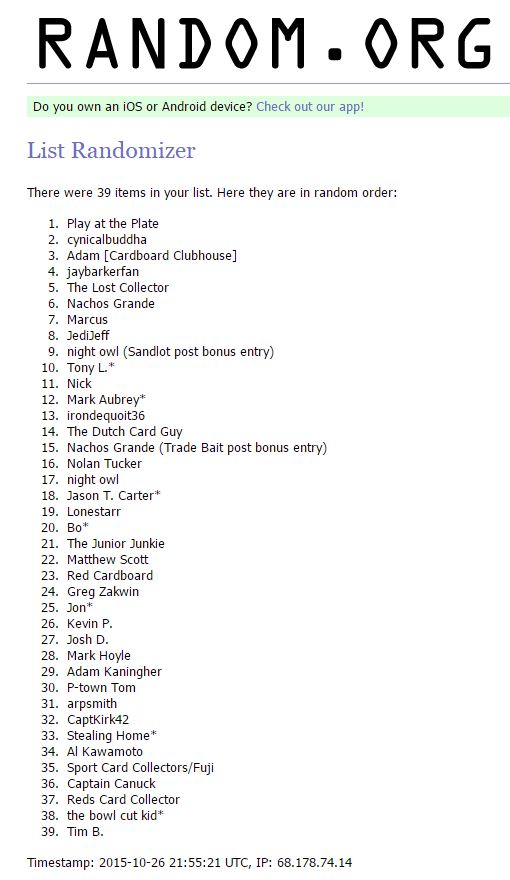 So if the Mets and Royals have a slugfest resulting in 39 combined hits in Game 1, Tim B. would be the winner, while up at Play at the Plate's end of the spectrum, they're hoping for a pitchers duel.

Good luck to everybody!

And remember the guys with an asterisk after their name will get another shot after this. Should be an exciting week here at Baseball Card Breakdown HQ. I don't get TBS or FoxSports in my TV package, so I haven't watched any postseason baseball yet this year. But I'll definitely catch most of the Series. I actually have a fancy dinner out scheduled for my brother-in-law's birthday Tuesday, so I'll probably end up missing most of Game 1.. Bummer.

I think I've mentioned that the place where I work is closing operations in Portland and moving to Georgia? This Friday is the last day for most of the staff here, so it'll likely be an emotional week with lots of goodbyes. I will likely hang on in some capacity for another month or so, but then I'll be back among the unemployed.

And if all that isn't exciting enough, we've only got one roll of toilet paper left in the house that needs to last until Saturday night. Should be thrilling to see if we make it! Haha.
See what I mean? Quite a week!

Thanks for reading, and good luck again to everybody who entered the contest.
Posted by defgav at 4:10 PM