I already showed the vintage portion of this package a few days ago, but here are the modern cards Dimebox Nick sent my way recently. 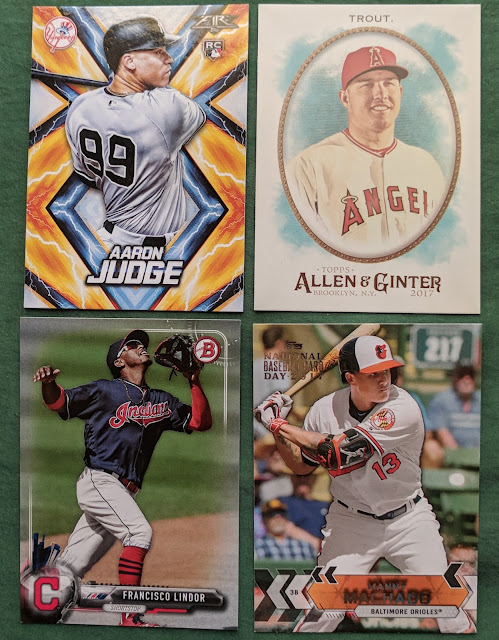 Always a treat to score a new Aaron Judge card in a trade, pictured here with a few other young studs. 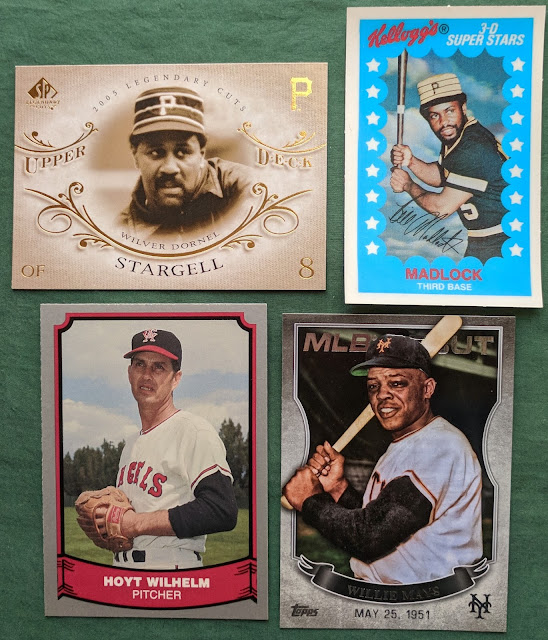 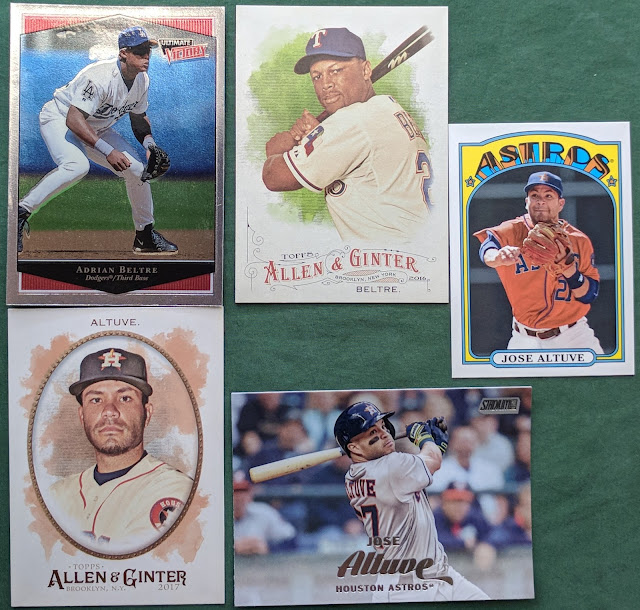 Nice lot of Beltre and Altuve. 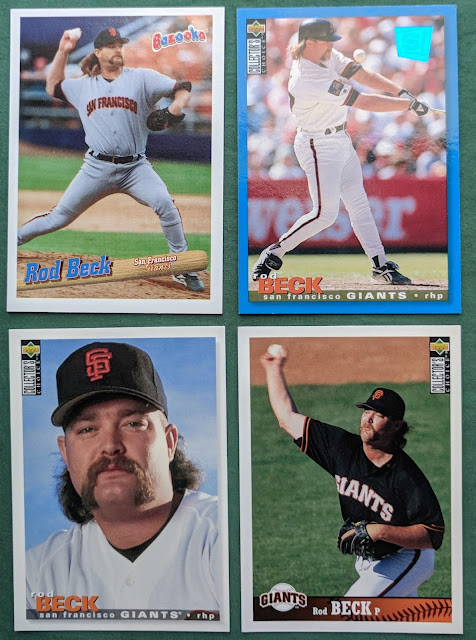 I'm happy to take Nick's Shooter dupes, as I can usually find one or two I need. 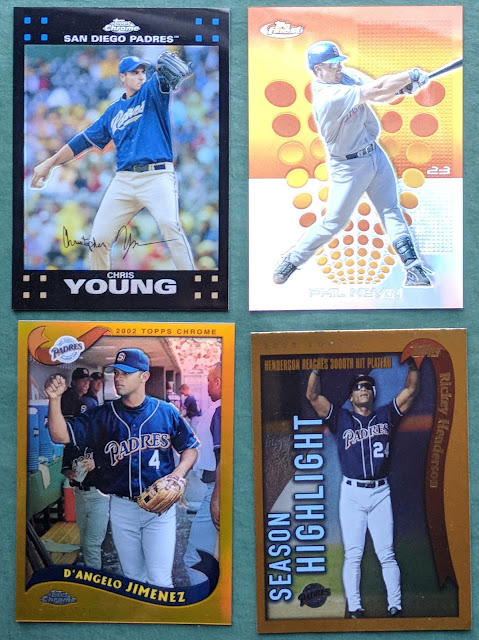 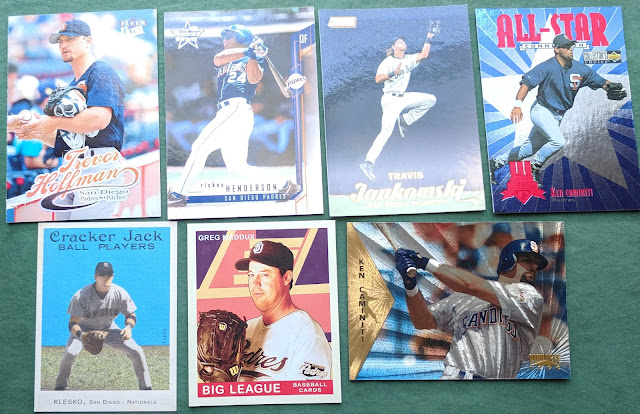 Less shiny Padres (though that glare on the photo is trying its hardest to make them shine). Some good ones here, but I might have to give the nod to the dufex Caminiti as my fav. 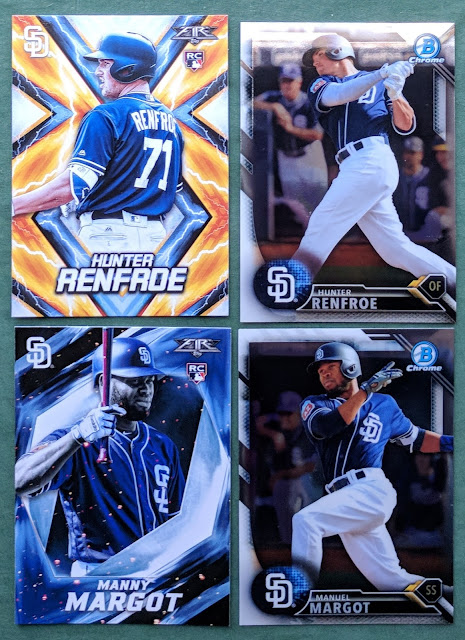 Renfroe and Margot got shoved into pretty much every Topps product in 2017 (really the only question was whether they called Margot Manuel or Manny). I'm sure most of you collectors are sick of their cards by now, though I'm still happy to receive them, preferably cards I don't already have. Hopefully these guys build off their decent rookie campaigns next year for the Padres. 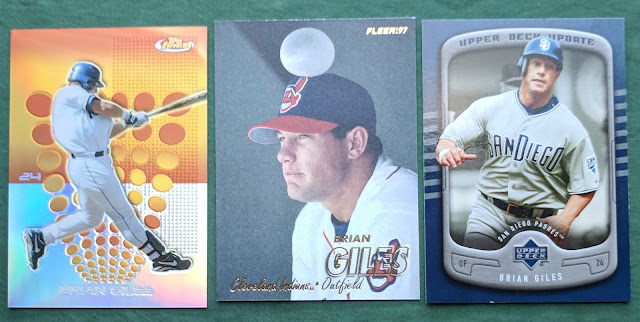 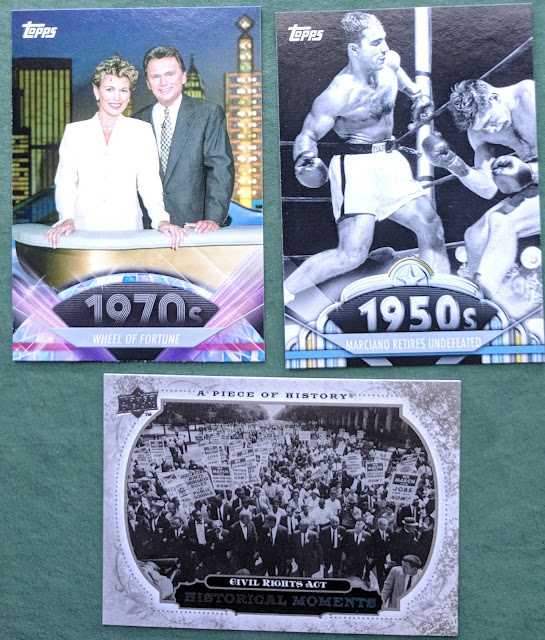 I can already see my "We Didn't Start the Fire" Binder project causing me consternation in trade packages. Now any time I get a card that isn't easily identifiable as something I collect (e.g. a PC guy, set need, random Padre, etc), I have to ask myself, "Hmm.. Is this intended for the Billy Joel binder?" Especially non-sport cards. Traders, myself included, will sometimes just toss in random cards for no reason other than maybe the recipient would like/need it more than me. But now I'm on Joel Patrol with such cards. haha

With this trio, I know "Wheel of Fortune" will slot in right ahead of "Sally Ride, heavy metal suicide." And I admit I had to check the spreadsheet, but "Marciano" goes right before "Liberace, Santayana goodbye." As for the Civil Rights Act card, that one isn't as obvious, but I think this is for the "Alabama" slot. ("Alabama is the site of the Montgomery Bus Boycott which ultimately led to the removal of the last race laws in the USA. Rosa Parks and Martin Luther King, Jr figure prominently.")

(I also got a recent mailing from Bo with cards for the binder, but that'll have to wait for a future post.)

Let's wrap up the highlights from Nick's package with this oddity... 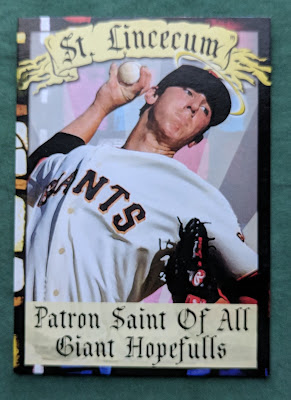 Ok, this is a weird one that I had to ask myself if it was for the Billy Joel Binder, as I've never collected Lincecum (and honestly was relieved that Zippy Zappy's oft-repeated prediction of the Padres signing Timmy at the sputtering end of his career never came to pass). 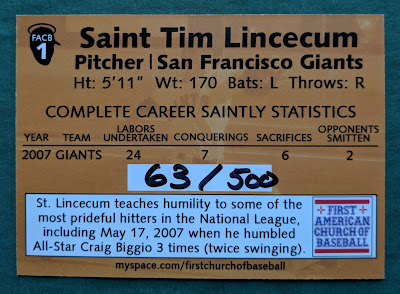 It's an interesting oddball that seems to from 2008. I'm pretty sure Nick collects Lincecum, so he must've already had another of the 500 copies out there. As a guy who enjoys making quirky custom cards, I can appreciate this one. But yeah, it's a weird one!

Thanks again for all the cards, Nick!
Posted by defgav at 4:28 PM