don't look a gift hobby box in the mouth

Time to close out my 2017 holiday haul. These 2 boxes are courtesy of my in-laws. 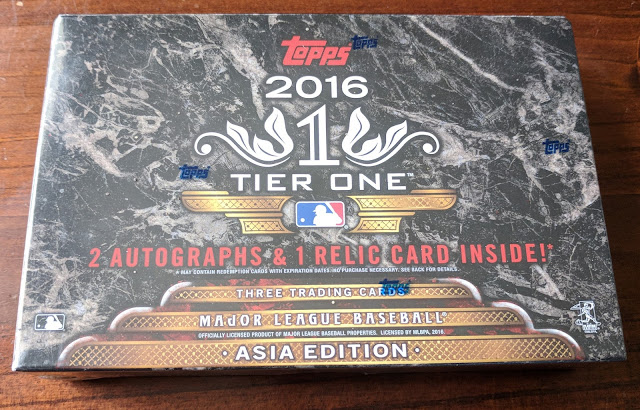 2016 Topps Tier One. This is the Asia Edition, which as far as I can tell is the same as the US Edition, but for some unknown reason is in a slightly different box and can be found for a few bucks cheaper than its US counterpart. 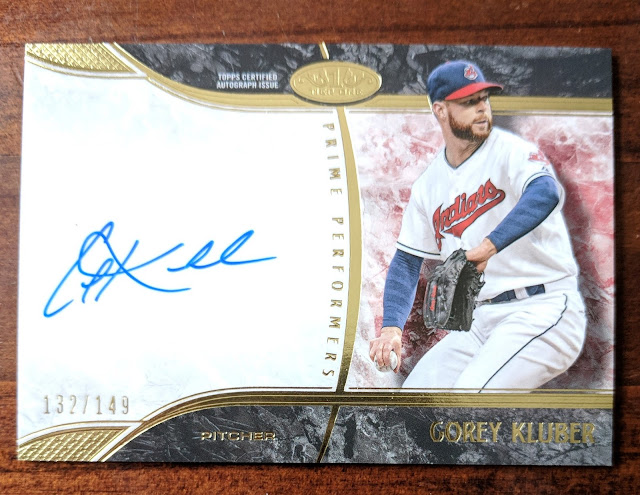 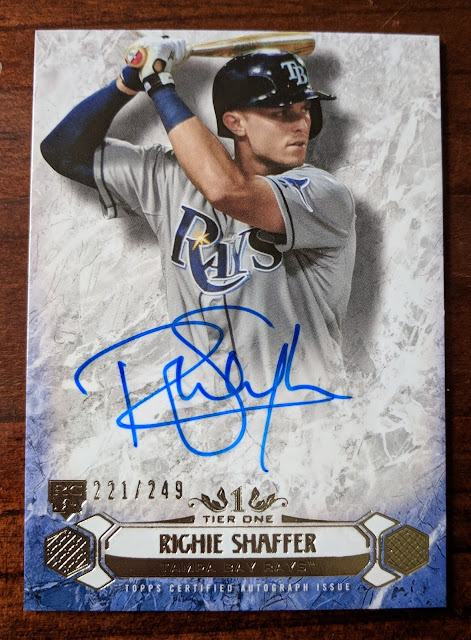 Richie Shaffer spent all of 2017 in AAA for the Indians org. On the plus side, he cranked 30 taters down there, but on the minus side, his average was .227. And unless Jackée is involved, 227 is not good. 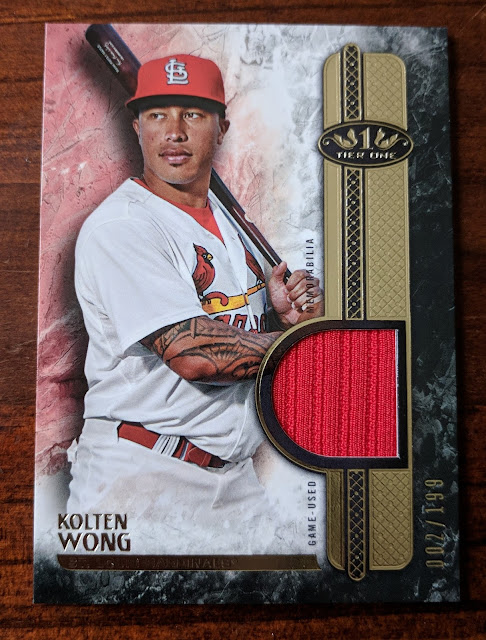 The 3rd and final card of the box is a Kolten Wong relic. Welp, it's always a plus when the swatch isn't plain white or grey. He had a solid 2017 season. I seem to end up with decent Kolten cards from time to time, but can't bring myself to formally start a PC. This'll likely end up with Kerry from Cards on Cards. He recently hooked me up with a nice package of cardboard (post forthcoming), so it's nice to pull decent redbirds to hit him back with. 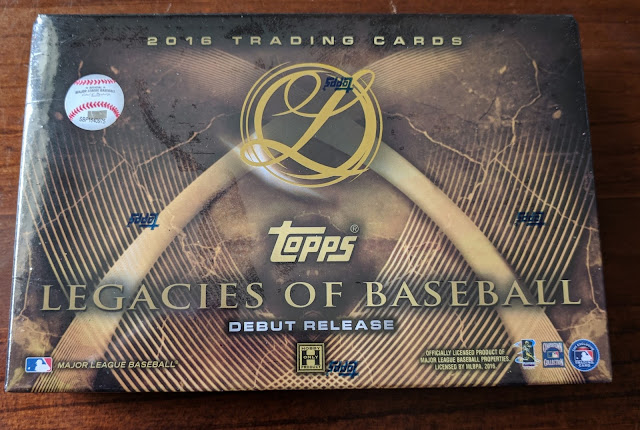 And here's another box of 2016 Legacies of Baseball. You may recall from a few days ago that I got a box of this stuff from my mom and pulled a Trout 1/1. This box here is from my mother-in-law. While normally I wouldn't ask for 2 of the same product at the same time, well nothing else in the desired price range really grabbed me. I considered asking for some Panini stuff, but ultimately stuck with good ol' licensed Topps. 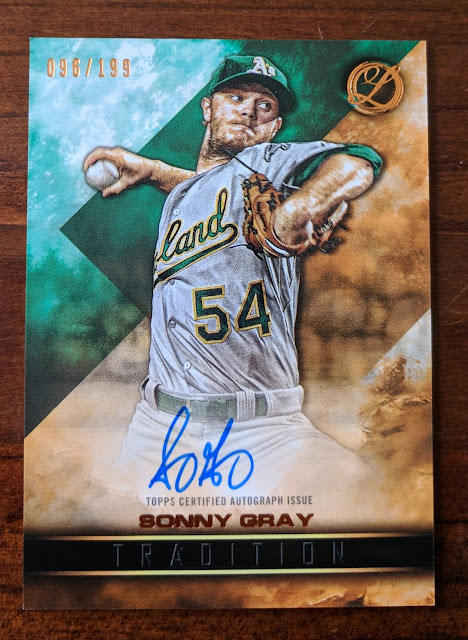 Hey, Sonny Gray is pretty decent. Perhaps he'll become a big star on the Yankees. Sure seems to have a lot of A's autos on the market, though. 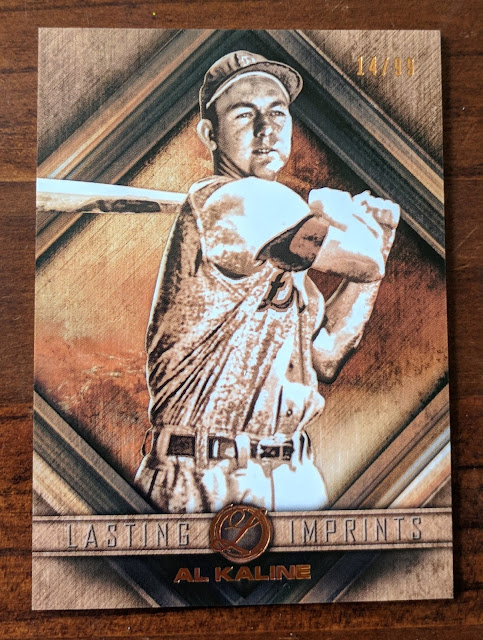 Hard to complain about pulling an Al Kaline. Numbered 14/99. I don't collect him these days, but I'm sure this'll come in handy next time I need to throw a little oomph into a trade package for a Tigers fan. 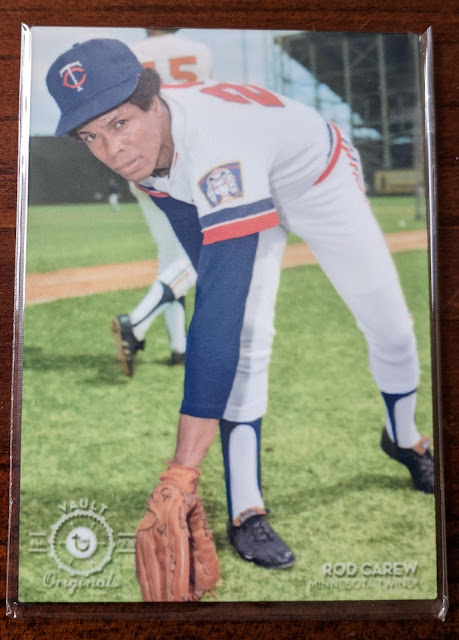 Hey, here's a guy I collect, Hall of Famer Rod Carew. These Vault Metals ingots are pretty cool in-hand. Probably wouldn't make a good wallet card, though. But I guess if somebody stabbed you in the ass, it could save your life.

Last time I flipped one of these around, I was surprised with a beautiful "1/1" numbering. How would I fare this time?... 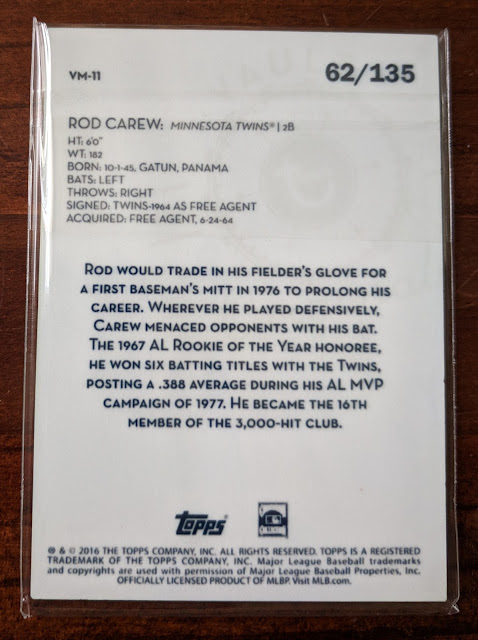 Meh, the /135 pressings are the "base" versions, so while I'm not complaining about the player selection, this isn't a big hit.

But you know what, I'm just glad that I haven't hit a Henry Owens card yet. That's the biggest risk when opening 2016 high-end boxes from Topps. For some reason, they really flooded the market with him, in all products, high-end no exception. Despite respectable numbers in the minors, he always seemed to choke in his Big League opportunities, and even loyal Red Sox collectors grew sick of the guy and don't especially want his cards.

So yeah, GOOD THING i haven't pulled any cards of his in this box breaking spree, right? 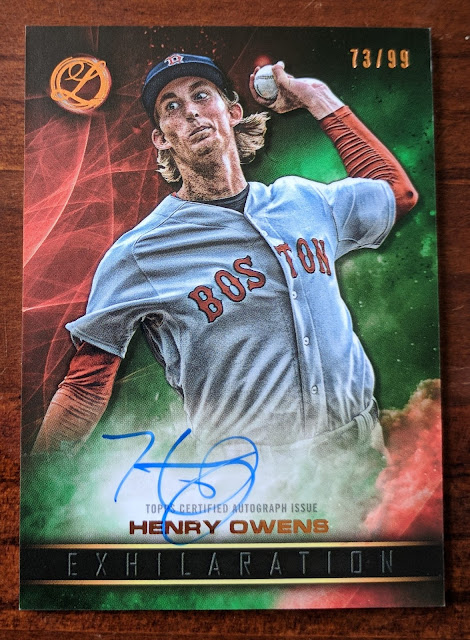 So close to escaping with no Henry Owens "hits". Not the best way to end things. Oh well. Still fun to open boxes like these, especially when it's not my hard-earned money on the line. Big thanks to my mother-in-law for indulging my xmas list requests, even if it turns out I would have been better off with the cash equivalent. The Kluber auto was nice. And the metallic Carew, too. Over all, the best pull from my birthday/xmas boxes was clearly the metal Trout 1/1. So at least there was that! And some other solid pulls to go along with it. Add to that the intangible anticipation and thrill of the rip, and I'd call the experience a success overall. The damn fool I am will probably ask for more boxes along these lines next year. At least I stayed away from those expensive 1-card boxes like Topps Dynasty. That's when pulling a Henry Owens really hurts. At least he has 3 other decent cards to soften the blow this time. 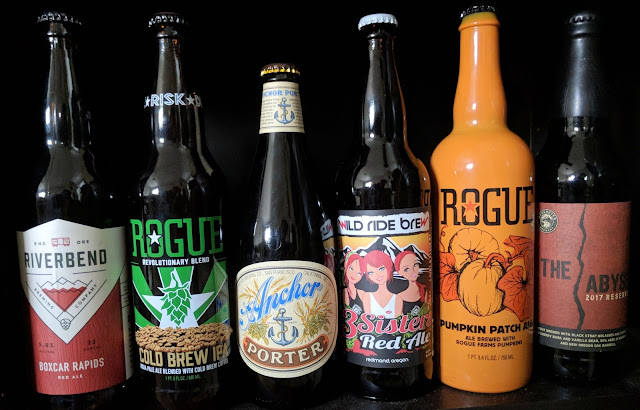 Not only do my in-laws graciously gift me with expensive boxes of baseball cards for Christmas, but they have also fallen into the tradition of hitting me with a six-pack of assorted craft beer for my birthday each year. So it's like the 12 Days of Beermas typically gets extended to nearly 3 weeks. Nice haul this year, selected by my father-in-law. I'm excited for these, though some of them will have to wait a while to get drinken (sic) because I said I'm gonna have a sober January, and I'll stick to that.

Thanks for reading and I hope you all had a nice holiday!
Posted by defgav at 3:37 PM