Probably my most epic trade ever

I recently completed a bigtime trade with Bubba's Bangin' Batch of Baseball Bits. No slight against Matt, who is a terrific guy, but this was a strenuous negotiation with lots of back-and-forth stretched out over several weeks. There were some valuable cards in the mix, so a simple blind trade wouldn't suffice. Our deal nearly fell through a few times (or at least reverted back to a smaller trade), but I was persistent and wouldn't let it die. So it was quite the relief when we were finally able to virtually-handshake on a deal. 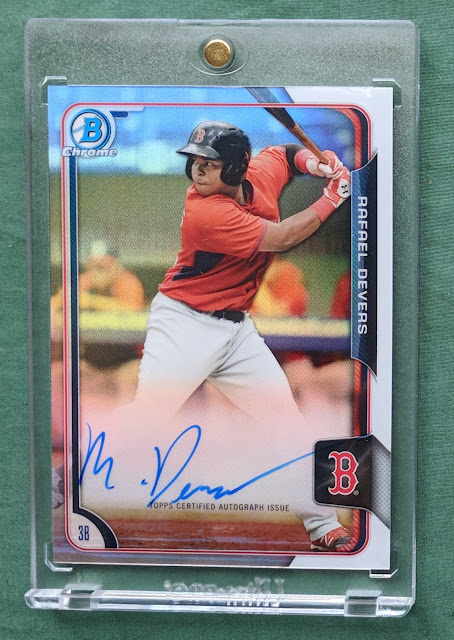 As far as current value, this might be the top card I've ever landed in a trade. Rafael Devers is a mega hot prospect with Boston. He made his MLB debut this past season at only 20 years old and looked really good, figuring to slot in as Boston's third baseman of the future for many years to come. 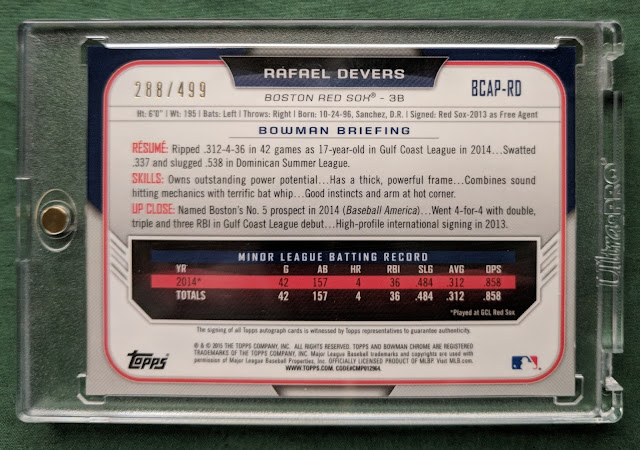 This is his first Bowman Chrome auto (he was in 2014 Bowman Draft, but only a base card, no autograph), which always seem to carry a premium with collectors. This card is pretty crazy on eBay these days. In fact, when I first asked Matt about it, I hadn't realized just how much it was fetching.

The card was a lucky pull from Matt a while back. I had to see about scoring it from him since I'm a sucker for hot rookies, plus I consider the Sox to be one of my favorite non-Padres teams (though I might have slightly more trouble rooting for them now since their new manager was one of my least favorite players of the '00s, always being a little bitch and starting shit against my Padres, and honestly I'd like to see him fail.) Matt made me work for it, but I was able to score a real nice HOF Braves auto to get him to budge (I'm reluctant to say who it was, because you readers might think I was a fool. So fingers crossed Devers is the real-deal. Ok, fine: it was a Maddux. On-card and licensed.) 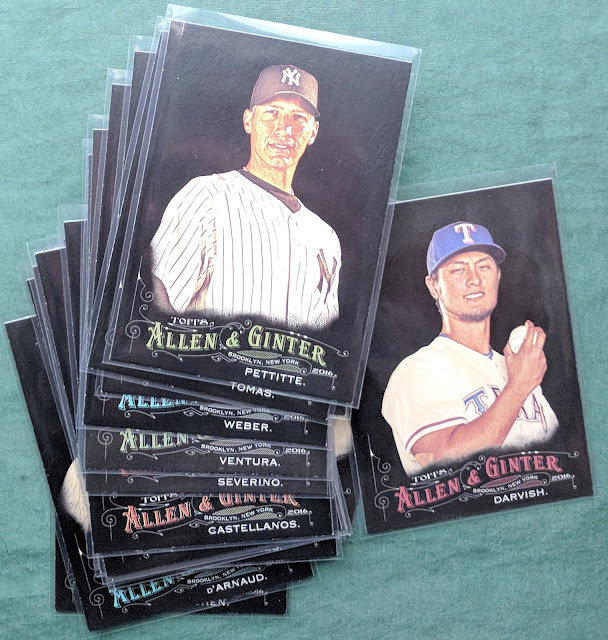 But what initiated the dialog is I approached Matt for help with the SPs I needed to nail down my 2016 Allen & Ginter X set. He's a renowned Ginter aficionado, after all. Incredibly, he was able to hook me up with all but 3 of the SPs I needed. (And after a couple recent pickups from Sportlots, now just waiting on my COMC shipment for the final card needed to complete the 350-card set.)

As if that wasn't enough, one last card sealed the deal: 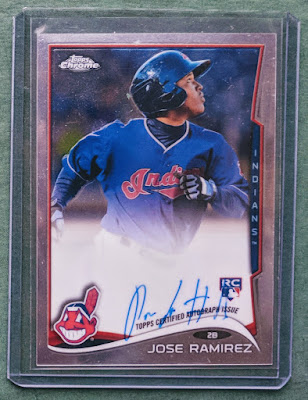 To be honest with you, José Ramírez is a name I wasn't familiar with until late this past season. Guess I don't pay enough attention to the Indians besides my boi Lindor, but @MrLapara here has strung together a couple excellent seasons in Cleveland. Really an under-the-radar five-tool guy. Was 3rd in the 2017 AL MVP race behind Altuve and Judge (and he's even a little younger than Judge). So I was very happy Bubba was willing to part with this RC auto from 2014 Chrome to complete our big trade.

Thanks again for working with me on this deal, Matt! I hope you're as happy with your side as I am with mine.
Posted by defgav at 3:03 PM