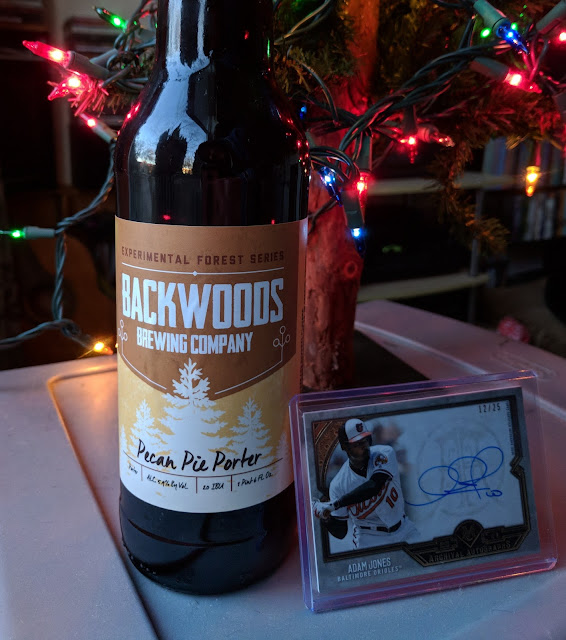 Gonna try doing this on the blog for 12 Days of Christmas Cards / 12 Days of Beermas.

In another instance of the blog serving as a journal of sorts, I was able to search my archives and determine it was 2013 that my wife began our tradition of Beermas, where she gifts me with a craft beer for twelve days leading up to Christmas. Ain't I a lucky guy?! This year, we agreed that I could have each beer revealed to me the evening before, so I can get psyched up about it. And that also means that you blog readers can come along for the ride (though if you want to actually have a sip, you'll have to swing by my house at dinnertime). 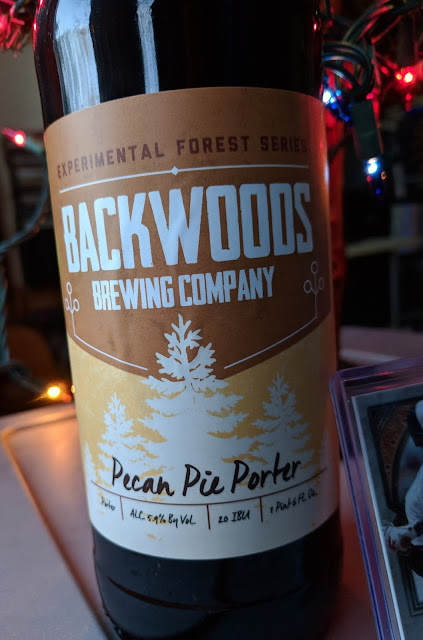 The 4th Annual Beermas kicks off with this Pecan Pie Porter from Backwoods Brewing Company out of Washington state. Oh man, this looks tasty. At 5.9%, it's a good Wednesday night beer (don't want to get too sloppy this early in the week). My wife noted that when she bought this at the beer store, the clerk was very excited about this one, saying it's one of his favorites.

I'll update this post with my reaction after I drink it, so check back for that soon if you're interested.

UPDATE: Man, this is really good. Smooth. Sweet, but not as over-the-top sweet as you might expect from a Pecan Pie Porter. It's got kind of an aftertaste of vanilla yogurt, which is weird to say about a beer, but I like it. 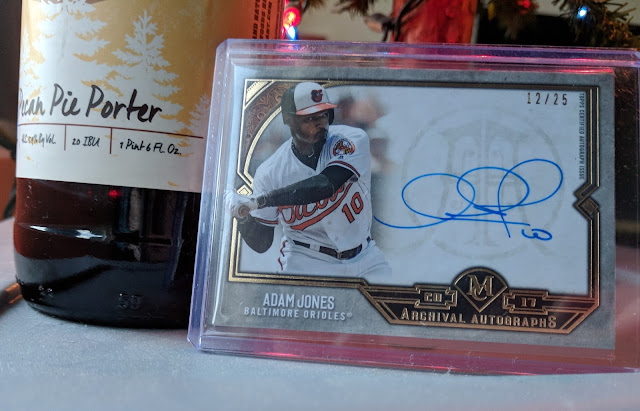 And the first featured Christmas Card of this series is an Adam Jones auto from 2017 Museum Collection. He's a fun guy to collect. While not a super mega star, he's consistently very good, and you can count on him pretty much every year to bat around .280 with about 25 homers and excellent defense in the outfield. I think this is a great looking card. It's my second auto from him, after one I made a sweet custom overlay for a couple years back. But yeah, no overlay needed on this one. While not the greatest penmanship, he's got a pleasing stylized signature, with what looks like a jersey number inscription too.


I gotta admit I've dropped the ball this holiday season as far as giving to ya'll on the cardsphere. I usually like to get a handful of "Holiday Blast" card mailings out to my trading buddies, usually with some custom surprises (like the LaMarry Christmas ornament and last year's Tony Gwynn ripcard), but I haven't had a chance to work anything up yet this year, and with us now in the "12 Days" zone, I doubt I'll be able to get anything out before Christmas. Sorry, fellas.

But I'll at least throw in a contest now. 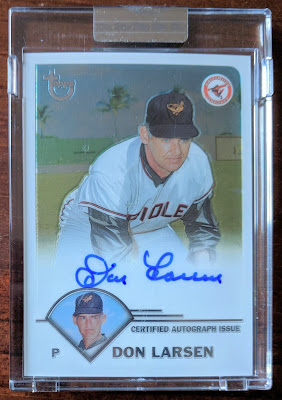 I plan to add to the prize package as the 12 Days go on, but to kick it off, here's a certified auto of Mr. World Series Perfect Game himself, Don Larsen. So one lucky winner will win that plus probably a few more cards to be revealed as we go.

Just comment on this post to enter. And there will be plenty of bonus entries available as the series goes on, so be sure to continue along.
Small print: Anyone can enter, but a condensed PWE version of the prize package will be sent in the event that the winner either A) doesn't have a US address, or B) hasn't commented on my blog this year on a non-contest post. Also Zippy Zappy is ineligible since I know he doesn't like entering contests anyways.

Thanks for reading and Happy Holidays!
Posted by defgav at 3:23 PM