Taking a deep breath with my Xmas gift to myself

Man, the last few days were stressful for me as I strove to meet my year-end goals at work to ensure I got my full bonus. Thankfully, I achieved what I needed to on the last workday of the year. Quite a relief.

Now, after a deep breath, I need to catch up on some stuff. Atop my to-do list for the holiday weekend is to work out the entries for my recent contest. Sorry for the delay there, but hopefully by my next post that'll be taken care of. Also some trade posts I need to write up for some generous card packages I've gotten in the past week or two. Lots of card sorting and posts I want to make.. almost overwhelming.. just gotta take life a card at a time. lol. But for now, here's a quick one-card post of what I consider my Christmas gift to myself for 2017: 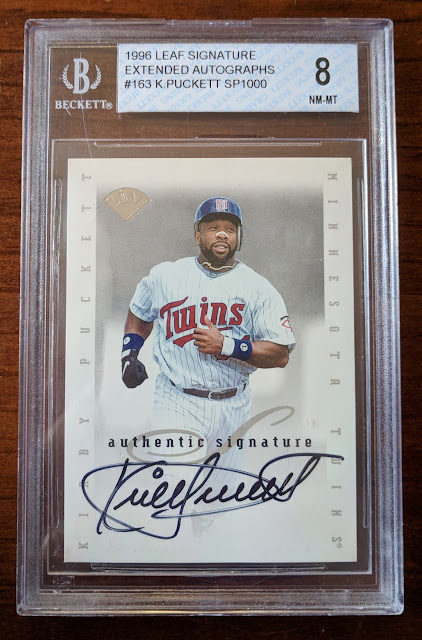 This was pricey, but still a good deal compared to what they usually go for. The Century Marks parallel of the same card from the same seller at the same time went for $600+. It's the same card but with "Century Marks" written in foil along the top, and the signature in blue ink, and a print run of 100. It's nice the seller listed these both at the same time (the guy was based in Minnesota, so likely a Kirby Kollector trying to recoup some xmas expenditures), so this one slid by under the radar for less than what it probably would have otherwise.

This is a "white whale" card for me, so feels good to snag it. It's my 2nd Puckett auto. I like this one more, so I might consider selling/trading away the other one in the future.

I love that Kirby's wearing a Breathe-Right strip in the photo! I too occasionally slap one of those on my nose at night to help open up my nasal passages. Not for snoring reasons, but just for breathing at full capacity. Not being able to get oxygen at 100% really sucks, and often seems to strike me at night, making it tough to fall asleep.

Anyways, it's a sweet Kirby for me to give me a pat on the back for making it through another year, one that had many ups and downs.
Happy New Year, everybody!
Posted by defgav at 3:42 PM