Congrats to the Red Sox on bringing home the 2018 World Series championship trophy. I was rooting for them to beat LA, though out of the final four, I had been hoping for the Brewers to win it all.

Milwaukee's terrific 2018 season just drove home how much of a national treasure Bob Uecker is. I wanted to pick up a certified auto card of his, but dang gumit, there are none! It's a tragedy he doesn't have any pack-certified auto cards out there. Not sure if the card companies haven't bothered asking, or if he just turns down all inquiries. Seems like a great way to make a chunk of change signing your name over and over for a few hours, but if he's not interested, fair enough.

Apart from his playing-days cards, he's only got a handful of oddballs out there and a pair of reprints in 2001 Topps Archives. Not many cards and no certified autos.

So anyways, that means it's time for me to take matters into my own hands. I kept an eye on eBay and ended up winning a beautiful slabbed Beckett-certified signed index card. But since index cards are boring, it was up to me to spice it up with a custom overlay. My time to shine! 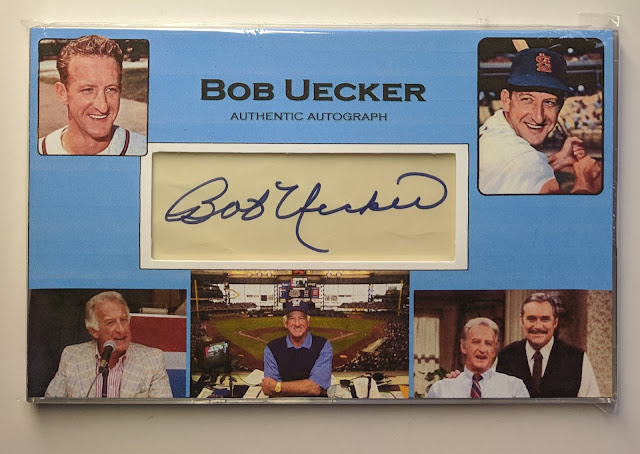 Since it was a 3x5" index card and came in a big slab, I had more room to work with compared to a standard baseball card. And so I wanted to take advantage of that and hit a few major aspects of his career. At the upper corners you've got a couple photos from his days as a cut-up backup catcher, borrowed from baseball cards. Anchoring the bottom is a recent shot of him as broadcaster for the Brewers, flanked by his best-known acting roles, Indians broadcaster Harry Doyle in Major League on the left and George Owens in Mr. Belvedere on the right. Gotta admit I watched a lot of that sitcom as a kid in the mid 80s before I cared about baseball, so I had to even squeeze Mr. Belvedere himself (Christopher Hewett) into the mix. If I really wanted to go nuts, I could have included photos from his time messing around with WWF wrestlers, or one of his many times chatting with Johnny Carson on the Tonight Show, or even his memorable beer ads. 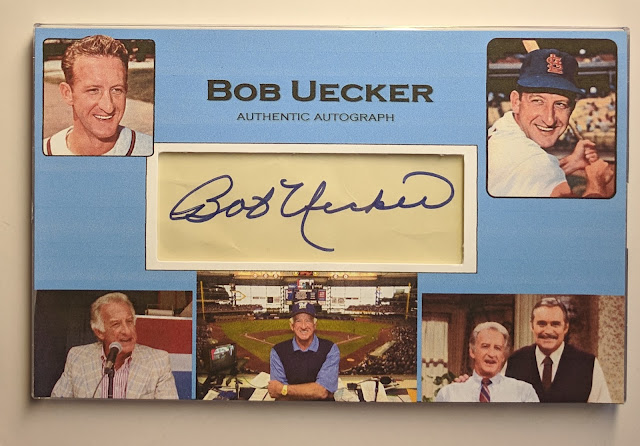 Here's a clearer shot of it outside of the sleeve. 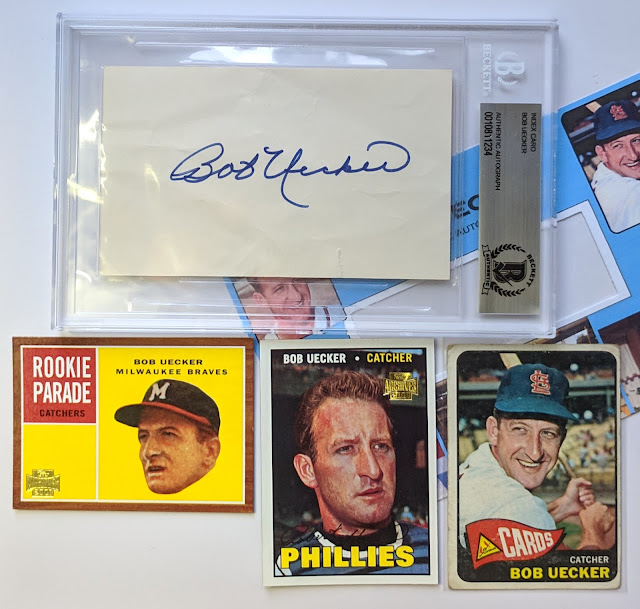 For scale, here's the undressed index card along with the rest of my collection of "Mr. Baseball" which is really just the two aforementioned '01 Archives reprints plus the only vintage card I've got from him, plucked from my 1965 Topps complete set. One of these days, I'll focus on picking up more of his cards, most importantly his '64 Topps, which I need for my in-progress setbuild.

I'm very happy with how this turned out. He's one of baseball's all-time classic characters. Just a very funny and interesting guy. Here's an informative little article I found called 17 things you might not know about Bob Uecker. 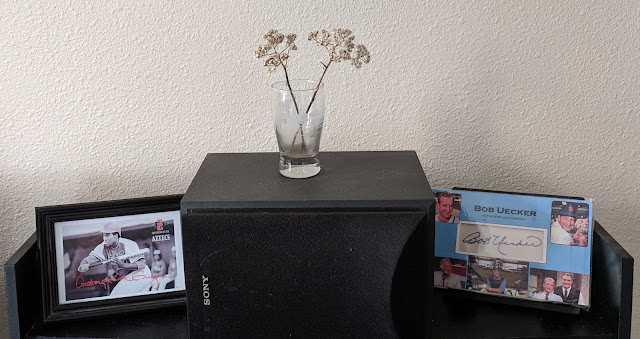 Definitely gonna have to display this badboy for a while! Gives me a big smile everytime see it.

Thanks for swinging by.
Posted by defgav at 4:06 PM