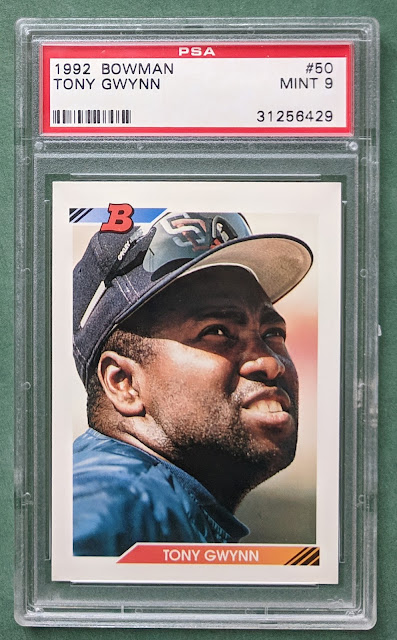 I wasn't exactly crying over this purchase, but this is an instance of where I was browsing eBay one night after a few drinks and ending up bidding on a card, and woke up to having won it. It's a fine looking Tony Gwynn card that I didn't have. 1992 Bowman is one of the more scarce mainstream sets from the overproduction era, adding some mystique to it. Still though, I didn't really need to go spending a few bucks on a graded copy when I would have been perfectly content with a raw copy from COMC for 42 cents. But oh well. I had been wanting to score an auto to cap off my Gary Sheffield PC, and hey, a Padres auto popped up.. didn't think I'd ever see that, but that's a cool thing about buyback autos. Landed this one for a good price. I liked Gary as a kid in San Diego, and probably felt like crying when he got traded away to the Marlins. But it definitely worked out for the best, as we got Trevor Hoffman in return, who proceeded to have a Hall of Fame career as a dominant closer. Gary had himself a very fine career as well, but a reputation as an asshole and murmurs of admitted PED use tends to keep his name out of HOF discussion.

Back to the card, I always assumed Topps stamped the buybacks after they were signed, though here it definitely appears Gary signed on top of the stamp, so I guess not. But still, cool card for me. Snagged another cheap Bill Madlock auto for the PC. It's from 2018 Archives. I finally got my pair of hobby boxes delivered today, so expect a recap of those soon. I might cry if I end up pulling this card as one of my four promised autos. Here's one that I can't really think of working in the "crying" theme of the post.. I was just stoked to add an auto to my burgeoning Rhys Hoskins PC. Gotta love the Rated Rookie logo, though the uniform logos are missed. I think his signature looks great here. 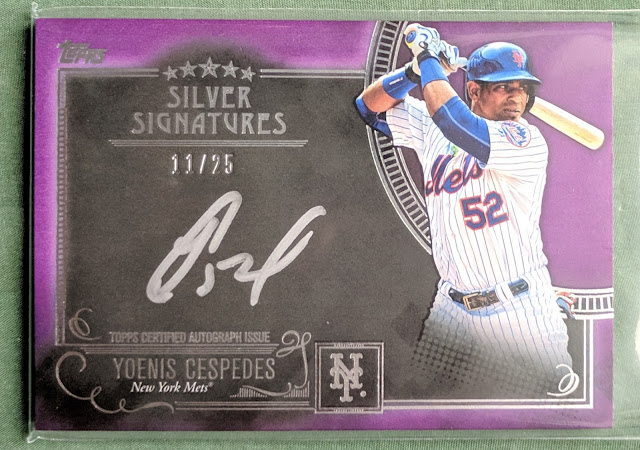 I had been wanting a Yoenis Cespedes auto for a while. This one looked nice and was a good price with combined shipping from the same seller as the Rhys. 11/25 isn't nearly as cool as 12/25, but still much better than 13/25. Cespedes Family BBQ is one of the better baseball Twitter accounts out there, and perhaps their love for Yoenis rubbed off on me. Hopefully he has a full, healthy season sometime. Hard not to cry when he keeps ending up on the DL.


That's it for now. Thanks for reading.
Posted by defgav at 3:54 PM