a trade to forget (redacted)

I kinda want to just bite my tongue about this one and let it die, but I've already alluded to this recent trade drama and a few readers were interested in the juicy details. So here we go.

There's a well-known woman in the Twitter card collecting community. She seems pretty cool and her cheap card sales are popular. I know she had gotten into some drama here are there butting heads with certain members of the "cardboard mafia", but she generally seems to get along with most people. I'm all for diversity in the hobby, so I think it's great when there's a new collector on the scene who isn't a middle-aged white guy (no offense to us middle-aged white guys.) So yeah, I was a fan of hers going in, for sure.

It was way back in mid August while I was on vacation in New Hampshire when I was checking Twitter and saw a tweet of hers showing off a Garry Templeton 1/1 auto she pulled from a box of 2013 Panini Hometown Heroes. She made a comment along the lines of "cool to pull a 1/1, but too bad it's somebody I never heard of." I perked up a commented that'd I'd be very interested in trading for it. I've told the story before, but as a kid in San Diego getting into baseball for the first time in 1990, I decided Templeton would be my #1 guy (My pal Doug already chose Tony Gwynn and I didn't want to copy him, lol.) Garry was the longest-tenured Padre at that point and seemed like a good dude to collect. It didn't last long for me, though, as I eventually lost interest and moved on to collecting Reggie Jackson as my top guy. After returning to the hobby as an adult, I started up a little Templeton player-collection for sentimental reasons, and have gotten it respectable over the past 2 or 3 years with a couple hits and some scare oddballs. So yeah, a 1/1 auto would make a nice highlight to the PC.

So once I returned home, I messaged her a nice selection of Miguel Sano (her #1 guy) cards. Autos, rookies, #'d parallels... good stuff! The next day, I sent her a little nudge message since I didn't hear back.

"Hey sorry I saw this earlier and forgot to reply! Yeah it's been crazy busy on Twitter notifications today! I'm just going to finish watering the lawn and I'll get back with you"

A week later, nothing. The frustration was just starting.

Another week passes. I tried nudging her again to see if she'd go for the trade. I offered up some more cards that might be of interest.

"Hey there! My apologies I must have read your last message when I was out and about and forgot to reply! Yeah that's a good trade"

TWO more weeks pass, with me nudging here a few times. At this point I'm feeling like a douche bugging her. If she doesn't want to trade, that's her right, she can tell me to fuck off. Some acceptable excuses would be:
1) I want more in exchange
2) I want to keep the card
3) I want to trade it to someone else
4) I don't like you

.. all worthy answers, but no, she wouldn't give me an answer.

Then I remembered she had a dramatic moment on twitter when she came out as gay (which I thought was super cool and brave, as I can't think of any other openly-gay card collectors). I figured I'd offer a couple dupes from my Pride PC for her, figuring she'd appreciate them. I've got a small number of signed cards from Sean Conroy, the first-ever openly gay active pro baseball player, and while it wasn't an easy decision, figured it'd be nice to let her have one. I also had an extra David Denson (1st opening gay player in affiliated ball) card for her. All the Sano cards PLUS this and more Twins stuff. Still no reply. Several more days go by and I offer up a Byron Buxton auto that I pulled from a Christmas gift box a couple years back. I figure she's a Twins fan, she might go for it. No reply.

At this point, I show her a screen grab of the receipt of when I bought a /25 Templeton auto from the same set for less than $5 shipped.. so if her hang up sealing the deal is that the card is worth a ton, well.. it's not. Maybe $30 at auction, would be my guess. Let's be honest, Garry Templeton was not a great player. He had some good years, and I like him from his Padres tenure, but he's essentially a "common" player.

FINALLY she got back to me, blaming Twitter for not alerting her to new messages (...er, ok). And seemed to say send me whatever and I'll send you the Templeton.

She finally gave me her address, and I gave her mine and it seemed like we would finally have a happy ending to this ordeal.

Over the month-and-a-half that I was trying to work out a deal with her, I offered up many cards. It was like, "howbout this? no? well, howbout this?" And when she gave me her address, I went ahead and rounded up some of the cards that I'd think she'd like, though she never really told me what she wanted. 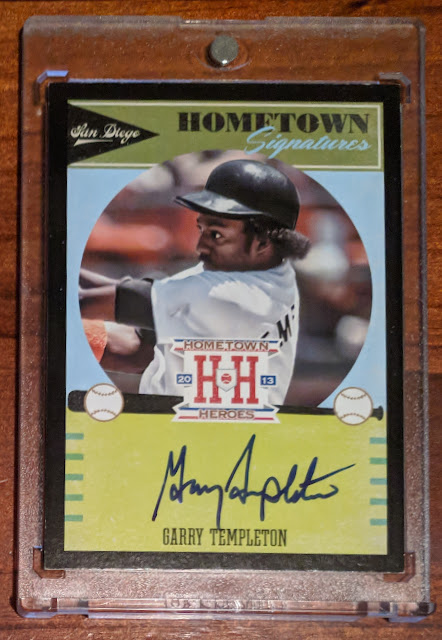 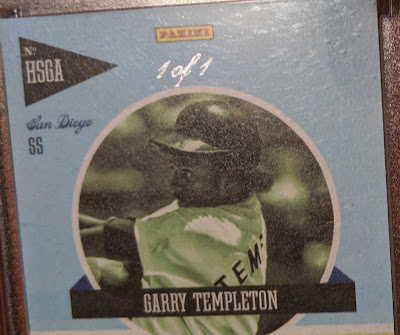 Woo! Like pulling teeth! But we finally got it. Woo!!

But no, didn't hear from her until a day later: "I got the package today, but there was no Buxton auto in it?"

WTF? She never expressed ANY interest in the Buxton but was now giving me shit for omitting it?
No "Thank you." No "thanks for the trade" or nothing. I was furious. I gave her a shitton of nice Sano cards (w/ 2 autos!).. he was a guy I once semi-collected,, plus a treasured Sean Conroy custom auto that he personally signed for me and I wouldn't have given up besides the fact that I thought she would appreciate it. Plus a graded Mauer card. I have no doubt that my side of the trade was AT LEAST as good as what I was getting back, probably much more. But no, she had to make me feel like I was screwing her in the deal.

Trying to stay positive, I replied, "Oh, sorry. Didn't seem like you were interested in the Buxton so I left it out. I figured the package was strong enough without it. But if you disagree, I could send the Buxton separately. Always my goal to make my trade partners happy! Just let me know."

A few days later, she responded with an "It is what it is" message. *fart noise*

Needless to say, I don't plan to ever deal with her again. I think it's cool that she raises money for charity (if she actually does end up giving that money to charity; after getting jerked around by her for over a month, at this point I don't have a lot of faith in her), so I encourage people to get involved in her dime-card sales. But I would warn against trading with her. SUCH a fucking headache. Frustrated the fuck out of me! Those are the kinds of trades that I hate. If you want to trade, facilitate a trade. If not, just say no. Now I can't even really enjoy the card thanks to the negative memories attached to it. But oh well.

Thanks for reading!
Posted by defgav at 10:23 PM