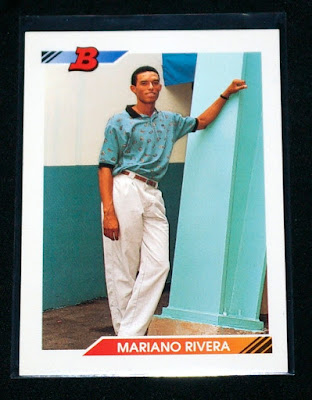 Here's a card I've been sorta after for a while ("grey whale" as the kids call 'em these days). Mariano Rivera's one true rookie. You've gotta give it credit for being an iconic card from the early 90s. It's one of those so-bad-it's-funny cards of freshly-signed teens that Topps and Bowman would include in their sets with photos of the player in street clothes, like they're modeling for an apparel catalog or something. I'm pretty sure this is the king of such cards, as far as value and significance. One of the few base cards from the junk era that's still sought after today, 1992 Bowman's low print run has helped this card hold its value over the years, with raw copies such as this one selling for around $20-25 consistently these days. 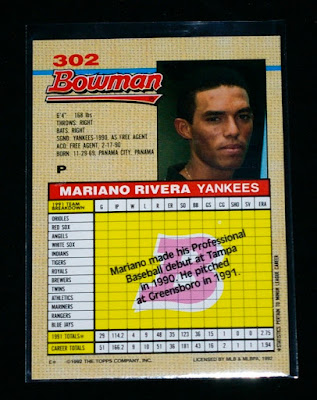 Funny thing about this card is it took a 2-day Hawaiian vacation before settling down into my collection. 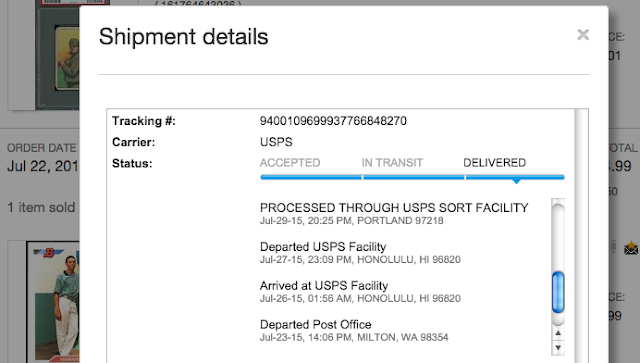 From neighboring Washington State, inexplicably to Hawaii for a couple days, to me in Portland, Oregon. I hope Mariano enjoyed the island waves and fun in the sun.

This isn't the first time a card I bought on eBay took an unexpected trip to Hawaii on its way to me.

I can't even be mad about it. I'd do the same thing if I were a sentient piece of cardboard. Hawaii is awesome. Especially while I'm stuck in the midst of a miserable 100-degree heat wave here.. I'd love to be splashing on a beautiful beach without a care in the world. Did I mention my boss just told us she has has ovarian cancer? That sucks! I actually like my boss. Makes me ache she has to go through chemo and that shit. 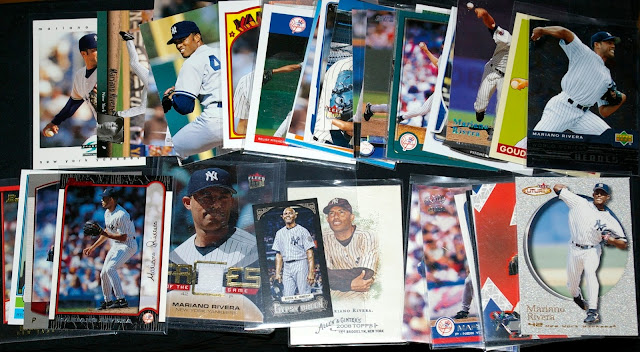 Mariano sort of became a PC of mine recently, thanks in large part to that dimebox I bought a few months ago providing me with a fat stack of his cards. He's nearly halfway to being in my Hundred Card Club now. (Do I talk about my Hundred Card Club too much? If so, sorry. That's just my main method of collecting these days.. get 100 different cards of a guy then move on. So it's sort of a focus, though I understand if not everybody is along for that ride.) This RC joins a jersey relic and a #'d /199 mini as notable cards in the PC. Would love to round it out with an auto someday, but they're still very pricey, so that'll have to wait. So help me god if Trevor Hoffman falls into the Trammel/Ripken dilemma and doesn't get into The Hall, I'm gonna be pissed.

Have a great weekend, err'body!
Posted by defgav at 3:24 PM