I was able to talk my mom into buying me a box of The Mint for my birthday, a product from Topps with a $999.99 MSRP. There was a brief period where collectors marveled at the excess and extravagance, but then Topps promptly came out with the even way more ridiculous Transcendent, that cost more than a house in some areas, and The Mint sort of faded away from thought, with really its only claim to fame being the Topps debut of Vin Scully autographs on the market.

Then it started popping up in Black Friday sales from card webstores at around half the original $1k price. Without any other ideas to ask for from my mom this year, I went ahead and hit her with a link and a little plea about how cool it would be for me to bust this crazy box of cards. God bless her, she went for it, though she was never 100% onboard with my baseball card collecting. Thanks, Mom!

So now I get the thrill of opening a very expensive box of cards, without the anxiety of having my money on the line. I'm very EXCITED!! I've gotten some great gifts in my life, but I don't think I've ever gotten anything that brought such a nice extended period of anticipation with it. Maybe like a big concert ticket or something.

There are just 5 cards in a box, all autographs, as is my understanding (Update: 5 autos and 1 relic). There are plenty of big name baseball guys in it, plus a few stinkers (damn you, Henry Owens, stay out of my box!). I think even Sylvester Stallone has a Rocky auto in there. And the aforementioned Vin Scully autos, which are all unfortunately redemptions, but they are apparently live now.

Fingers crossed for a nice hit or two!

I've drafted this intro part before opening the box, but now let's do it! 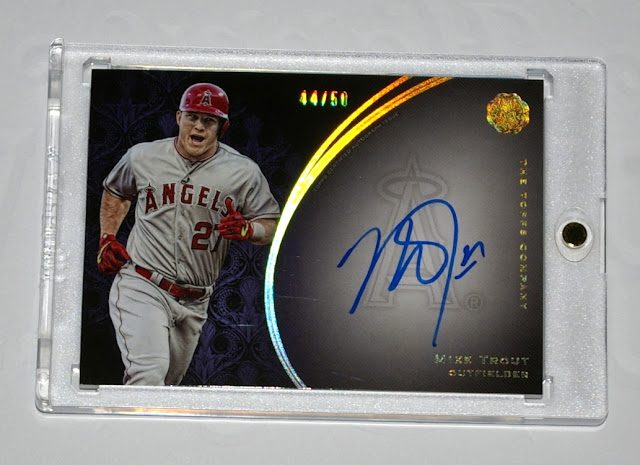 NICE!!!!
I was very happy to pull this gorgeous Trout auto #'d 44/50. He's the best player in the game and only 25. I bought a Trout auto a couple years back, but that's a stickergraph, and I had been hoping to one day be able to land one that was on-card to really help kick my Trout PC up a notch. This card definitely does just that. You know what card also does that? 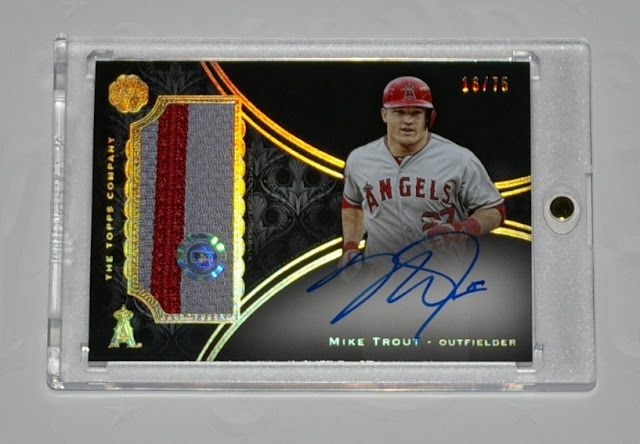 THIS ONE! Yep, back-to-back Mike Trout autos. Now that's something you don't pull everyday! This one is #'d 16/75 and includes a nice piece of jersey with a patch stripe thing (whatever you call that; hey, I'm no seamstress). Great looking card! Normally, 2 autos of the same guy in a pack would be something to roll your eyes at, but a double dose of Mike Trout? You jump at that 100 times out of 100. A terrific pair or pulls for me here. 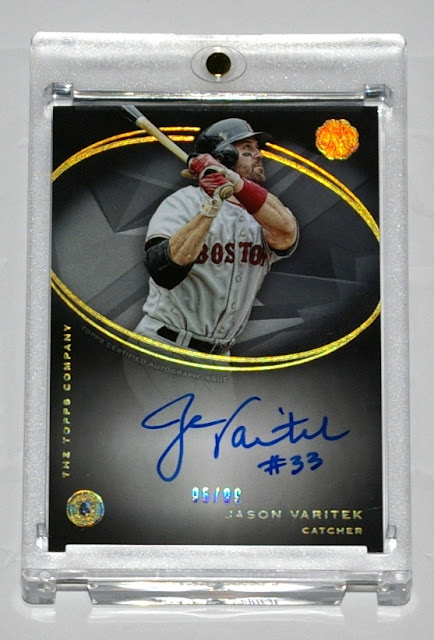 This was actually the first card showing when I opened up the inner box, right before the pair of Trouts. Jason Varitek is no slouch, but when I saw this card, I briefly panicked that I was in for a bunch of cards like this.. not bad, but not justifying the crazy price tag. This one is #'d 95/99 and includes a little jersey number inscription. A key member of bringing multiple World Championships back to Boston, he's a bigtime Red Sox fan favorite. Pretty cool pull. 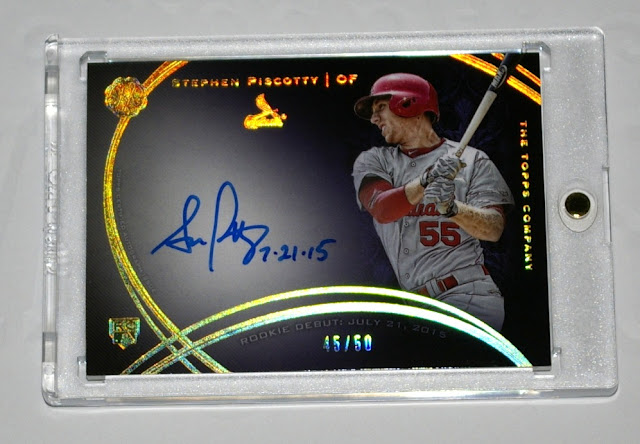 Ha, man, I sure to seem to pull Piscotty autographs frequently. I had just recently traded a couple away, but I had a feeling I'd be reunited with his ink again before long. And here we are. I might have to hang onto this one, a birthday gift, after all. It's #'d 45/50 and has been inscribed with the date of his MLB debut. At first I figured he was dating the signature, I guess just for the heck of it. But no, as you can sorta see at the bottom of the card, it's calling out his rookie debut, which was July 21, 2015. He had a very solid first full season in 2016 and looks to be an important part of the Cardinals' lineup for the long haul. (What's crazy is that Mike Trout is younger.) 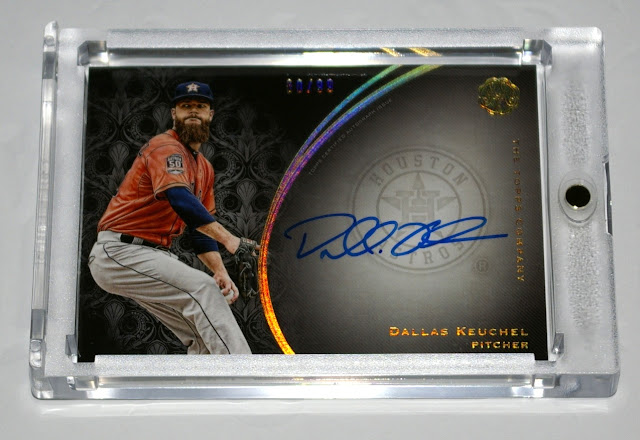 And here's another guy whose autographs keep finding their way to me in recent months, 2015 AL Cy Young Award winner Dallas Keuchel. This one is #'d 80/99. Nice enough looking card, but can't get too excited about it after the down 2016 season he had. Hopefully he bounces back next year.


With the 5 autos out of the way, there was one non-auto relic card left to finish off the box... 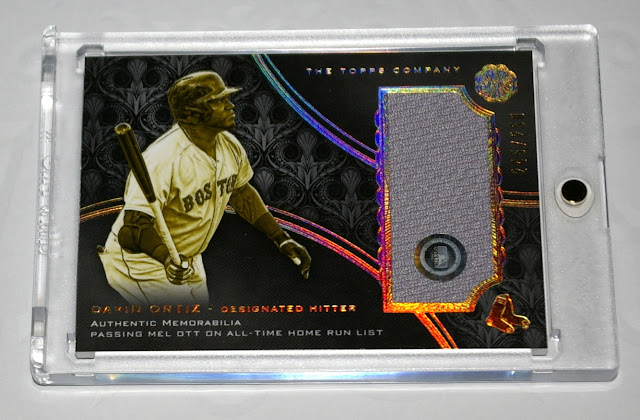 It's a David Ortiz relic #'d 245/250. The plain grey swatch isn't too exciting, but as the card mentions (and authentication sticker corroborates), this is from his uniform worn on Mother's Day 2016, a very big day for him. May 8, 2016, he "unloaded for his 453rd and 454th homers with Boston, towering solo shots to right-center in the fourth and seventh innings of the Red Sox's 5-1 win at Yankee Stadium ... Big Papi's first blast on the night allowed him to pass Hall of Famer Carl Yastrzemski for second on the team's all-time list. With 512 home runs in his career, Ortiz also passed Mel Ott and is tied with Ernie Banks and Eddie Mathews for 22nd on MLB's all-time list." (source)

So that's a nice piece of history in that card. A silver-ink autograph on the card would really have taken it to incredible heights, but I can't really complain. It's a heck of an addition to my Big Papi PC.


And there you have it, the most expensive box of cards I've ever opened. The pair of Trout autos were clearly the highlights. If I were inclined to sell all these cards, I could likely make my (mom's) money back on the box without too much trouble. So it's definitely a relief not to have gotten a dud of a box. It would have been a particularly nice box for a Sox fan, with the Varitek auto and Ortiz relic... but thankfully no Henry Owens, the crappy young pitcher who somehow got an autograph included in this product.

The anticipation was a lot of fun, and I'm ecstatic that there was a nice payoff. While it would have been cool to pull maybe a Vin Scully auto, or like Hank Aaron, Sandy Koufax, or Kris Bryant in there, too.. definitely no complaints about a Mike Trout auto.. much less TWO Mike Trout autos! Wow. 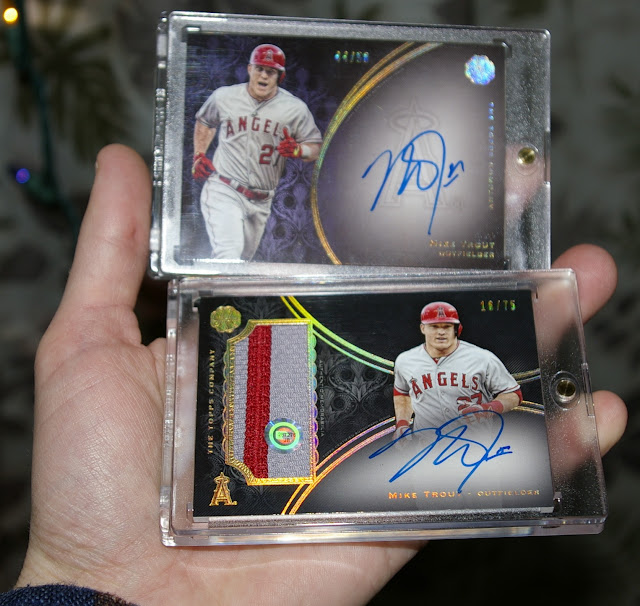 Thanks for stopping by and I hope you have a very Merry Christmas!
Posted by defgav at 9:46 AM