Bountiful card package from Too Many Verlanders

Here's some great stuff I got the other day from Dennis (Too Many Verlanders/Manninghams). 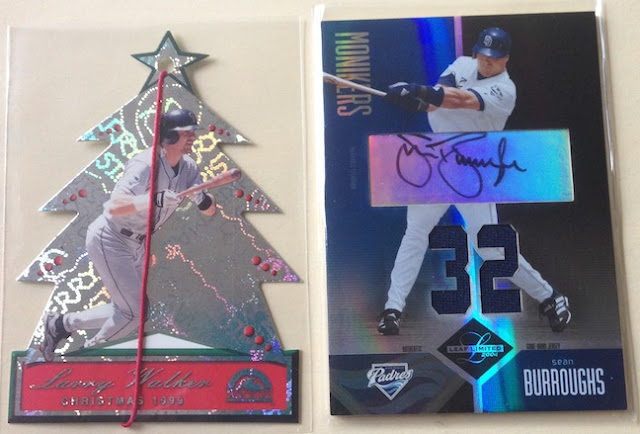 The package's instructions had me open these last, but I'm going to show them off first.. a couple sweet Christmasy cards. I had been wanting to get one of those Pacific ornament cards for a while now, so this was a very cool surprise. I seem to come across the Mo Vaughn one of these at the card show from time to time, but I don't collect him, so I never pulled the trigger. But Larry Walker, yes, I definitely collect, so this is perfect. I'm tempted to hang it on our little fake tree, but it seems kinda delicate so I think I'll keep it safely in the penny sleeve.

As for the other card, it's a shiny auto/relic of former can't-miss Padres prospect Sean Burroughs. Flip them over... 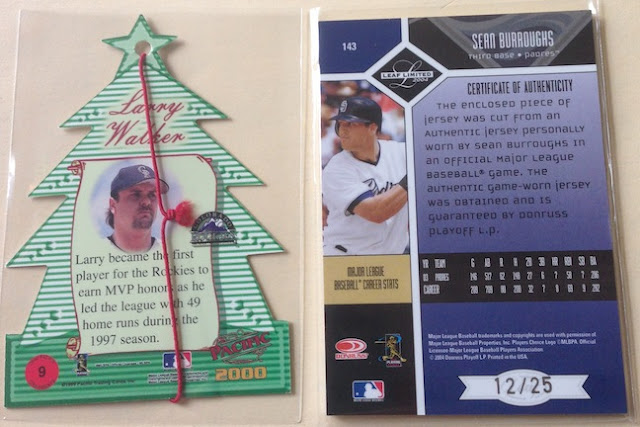 Wow! This trio of 2004 Topps Chrome relics takes me past the halfway mark with this insert set I'm trying to complete along with the main set's black parallels. 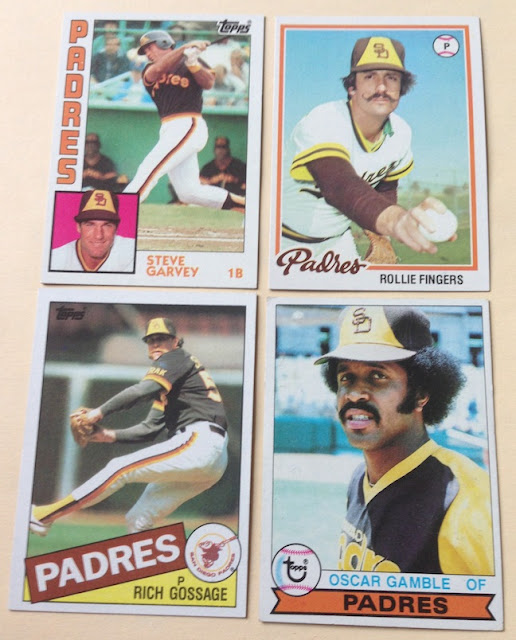 Here are some old Padres cards of guys I collect. I think I've got them already, though these may very well be upgrades, as they're pretty sharp for the most part. 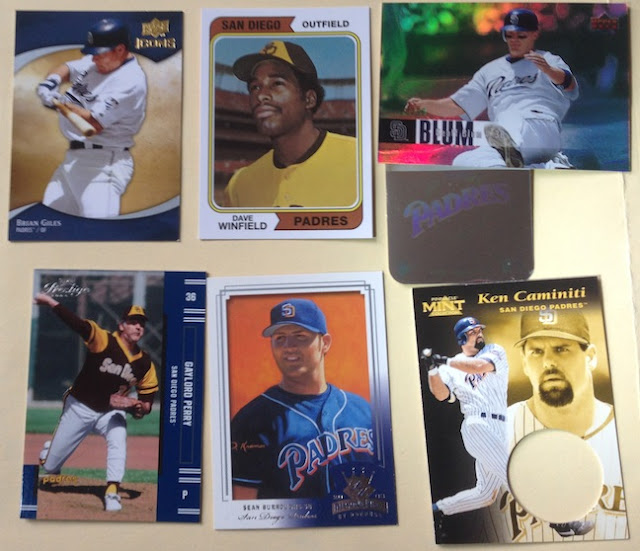 Some more cool Padres, including a Berger's Best Winfield reprint, a Geoff Blum #/99, and a Caminiti that at one point had a coin embedded in it, yet now just has an empty hole (...makes you think.) 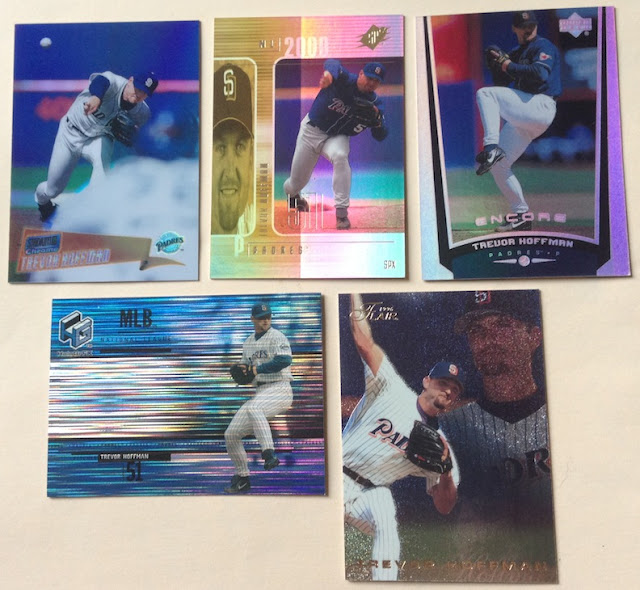 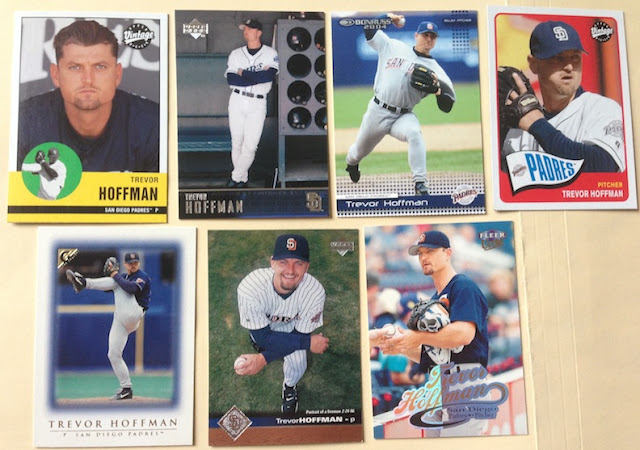 And a bunch of less-shiny Hoffman cards! Looks like the Shiny Machine (or whatever they call it) had a hiccup halfway between applying the shininess to that last one, as it really looks like that, not an issue with my photo.

Trevor is scratching at the door to the Hall. Last I saw, he was at 77% on all revealed ballots so far (75% needed for induction). I hope he's able to hang on for the save. 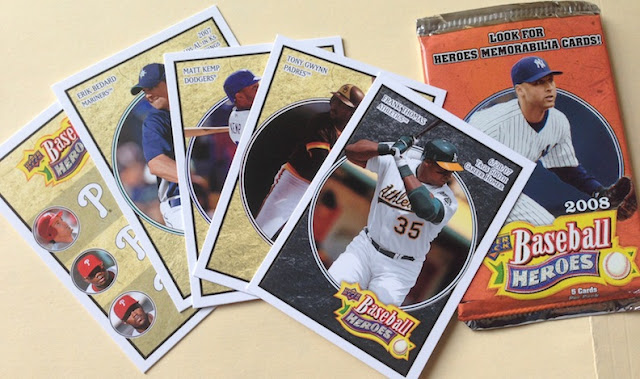 Dennis was kind enough to also give me the gift of ripping into a pack of cards, with this unopened pack of 2008 UD Baseball Heroes. I was able to pull 3 dudes I collect out of the 5 cards, so I'd say it was a success.

Finally, I called dibs on a couple things from the holiday giveaway/tradeapalooza Dennis ran recently: 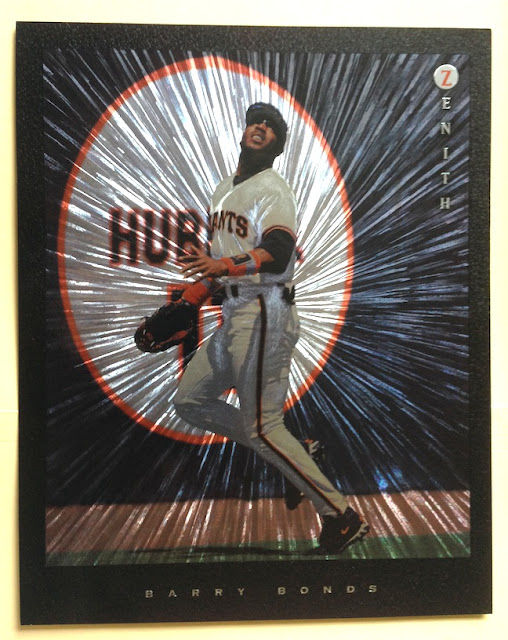 This is a Barry Bonds 1997 Zenith Dufex 8x10. Normally I try to stay away from oversized stuff like this, as storage and display can be a pain. But man, the dufex effect (I always want to call it duflex) sure is snazzy all big n' in your face like that!

Bonds is cool, but I was more excited for the Ken Caminiti.. 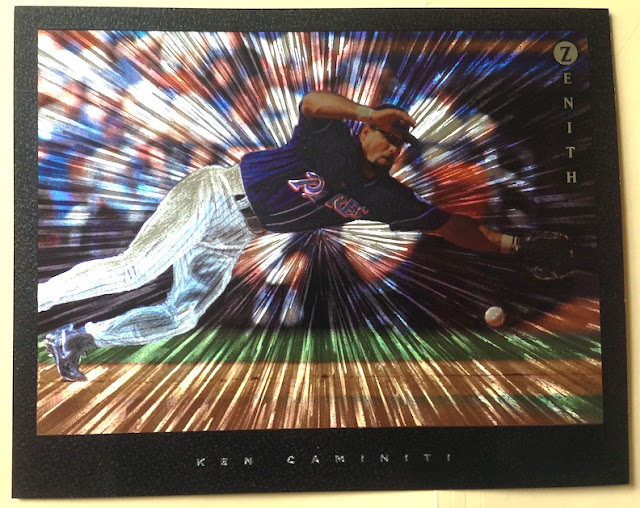 That's pretty sweet and works as a nice backdrop, allowing me to set up a neat little display in the man cave... 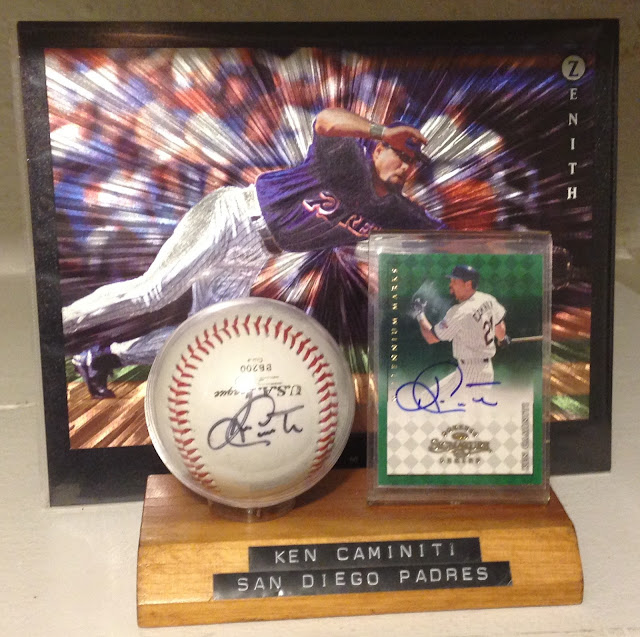 Oh, I like that!
As a San Diego fan in the late 90s, gotta have a place in your heart for Cami, even if he did end up being a cautionary tale. I think the auto card was an eBay pickup a while back, and the ball w/ stand was a $5 card show pickup earlier this year.


Big thanks for everything, Dennis! Hopefully my Holiday Blast PWE to you finally arrived. (Still a few people out there I haven't gotten any sign of acknowledgement from.. not that they are obligated to get in touch or post about it ASAP, but it's just nice to know they showed up safely. The gift I sent to my folks last week-- I even paid an extra buck to send it Priority, and the tracking number has gone dark since the day I sent it out. Last seen departing Portland, should have arrived at its destination Monday. Not happy about that! Hopefully it shows up for them in time.) But yeah, after this awesome package, I'm going to have to round up a few more cards to send out and balance the scales a bit, regardless of the fate of that PWE. Thanks again, Dennis!
Posted by defgav at 4:20 PM