If you've been reading this blog for a while, you know I'm into Christmas Cards (cards #'d 12/25). For whatever reason, I just think they're super cool.

But what doesn't get much attention here is that I'm also into Christmas Eve Cards, (#'d 12/24), which makes even more sense seeing as that's my birthday. But the reality is there aren't many 12/24 cards around, so I don't bother to really chase them much. 25 is a nice "one quarter" number that Topps and card companies of their ilk naturally pick for parallel print runs on the regular, while 24 remains an oddball number for print runs that doesn't get used nearly as often.

I'm thinking that maybe in 2017, I'll focus more on 12/24 cards and less on the 12/25 variety. That would likely save me money, thanks to the simple fact that there are much less available cards to chase. That said, both are still very welcomed in trades. 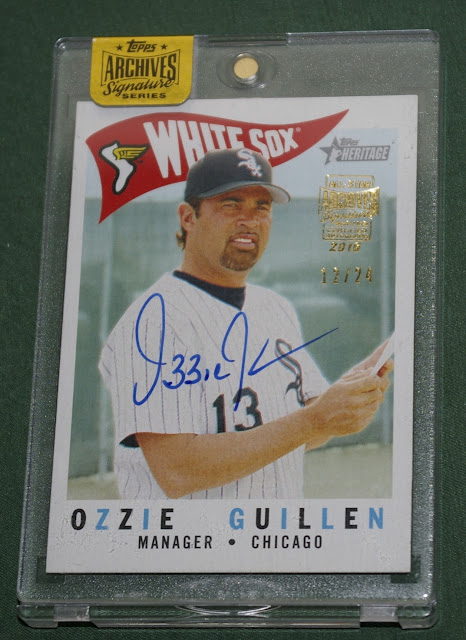 Ozzie Guillen sure was one of the game's more entertaining characters for many years, and left his mark on the game by helming the White Sox as they broke their championship drought by winning the 2005 World Series. 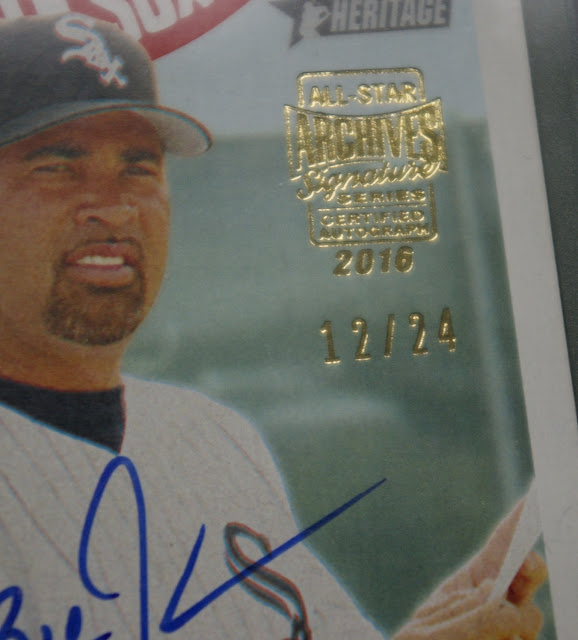 It's the latest 2016 Archives Signature card I've picked up. (Topps needs to stop naming so many of their products Archives.. there's, what, 3 or 4 different products this year claiming to be Topps Archives?) This card set me back about the price of a blaster, which might be over-paying a little for an Ozzie Guillen auto (he signed a lot of cards for this product), but I was anxious to get my Christmas Eve Card collection off the ground with a nice specimen such as this. 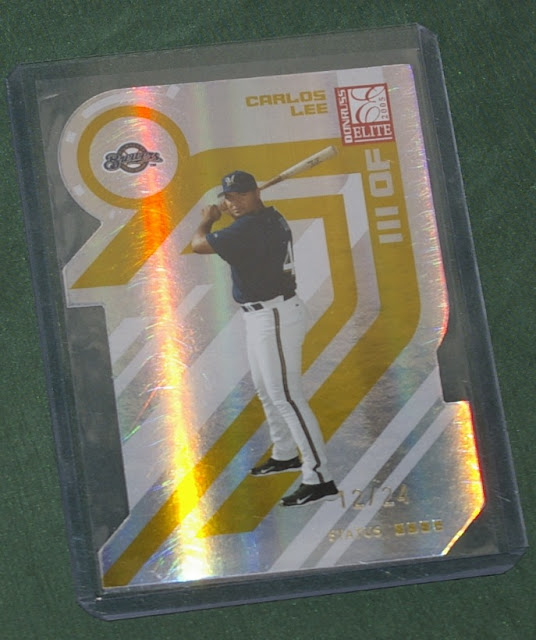 Carlos Lee had a very fine career, putting up 358 home runs and batting .285 over his 14 years in the Majors. 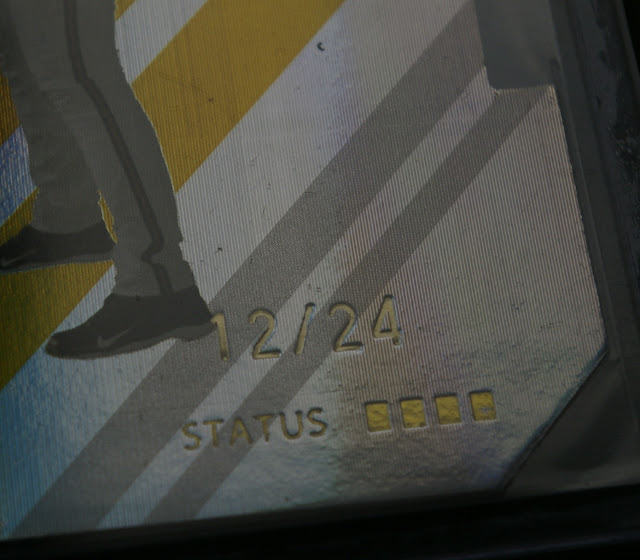 This 2005 Donruss Elite "Gold Status" diecut parallel didn't set me back too much. 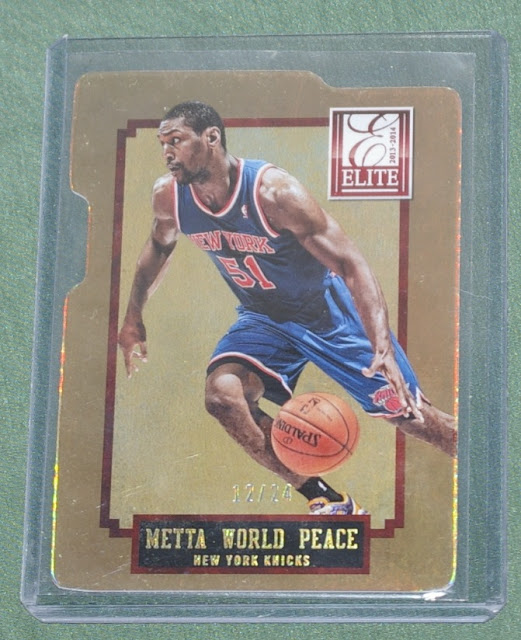 Switching gears to basketball, but sticking with Elite, here's Metta World Peace. This 2013-2014 Panini card came out a couple years after he changed his name from Ron Artest. I'm surprised to learn he's still playing..? Currently on the Lakers. The former bad boy must be behaving himself these days since I haven't been hearing anything about him. His career highlights include a championship in 2010 during his first stint with the Lakers, and a great 2004 with the Pacers when he was an All-Star and later named NBA Defensive Player of the Year. 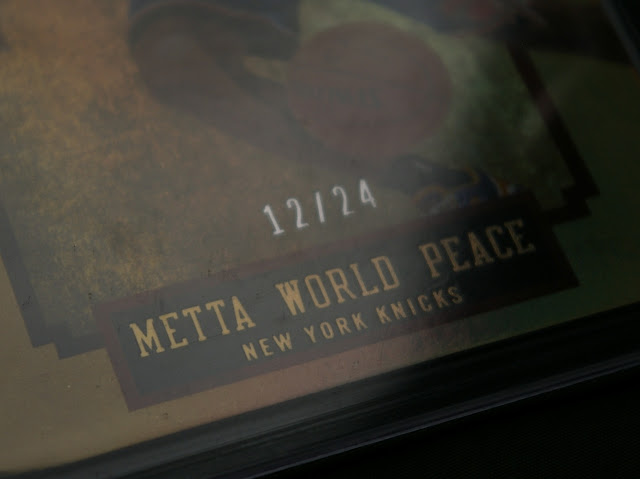 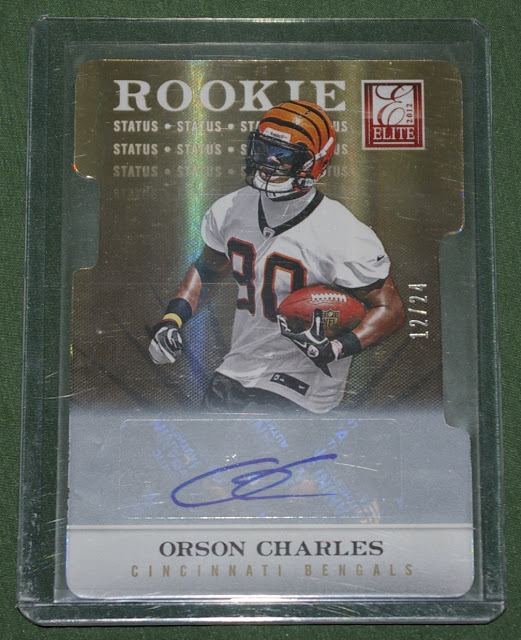 Now onto football, here's Orson Charles. I only bought this one because it was the cheapest 12/24 auto on eBay at the time. Turns out Orson is not a good dude, having gotten a DUI and nailed for brandishing a gun whilst driving in separate incidents. His football career hasn't been very impressive, either. He most recently surfaced briefly with the Detroit Lions earlier this year. 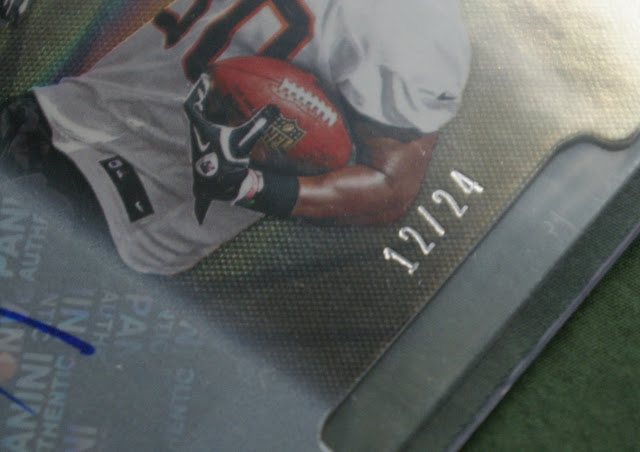 Welp, this holiday season, let's hope he's able to turn things around for himself. He's still got a place secured in my collection regardless, thanks to Elite's penchant for numbering their Gold Status parallels out of 24. Oh wait-- I get it-- 24, as in 24 karat gold. Makes sense, I guess.

The real holiday surprise with this football card purchase of mine is that the seller generously threw in a bunch of base cards from 2014 SP Authentic. 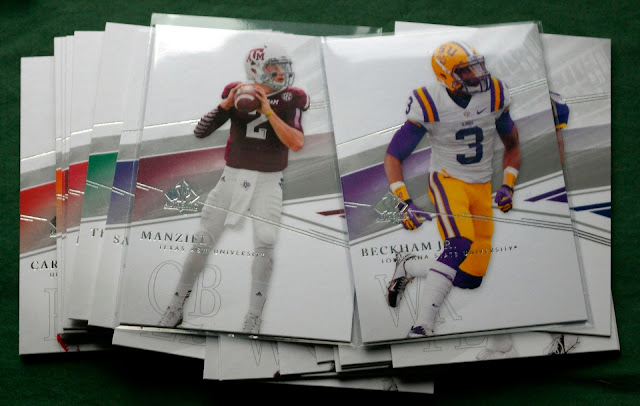 A couple names in the lot definitely rang a bell with me: Johnny Football and Odell Beckham Jr. Not bad for surprise bonus cards with a cheap nobody auto pickup!

You might be wondering why I chose to publish this on 12/23 instead of waiting a day.
Well, I've got big birthday plans, with a forthcoming post on 12/24 to feature the most epic box break of my life. 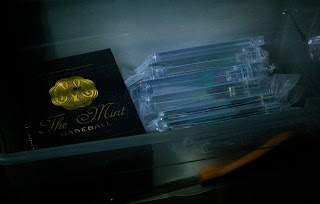 I've got this setup on my bedside table right now. The birthday present from my mom is a box of cards with a manufacturer's suggested retail price of $999.99. The break is ready to go, with a pair of scissors as well as assorted sizes of new one-touch cases ready to give safe harbor to the wondrous cards poised to make their entrance to the world. I'm so excited for this that my plan is to rip into it right when I wake up, before I even get out of bed. (though that could change if, say, I wake up really needing to pee, or get up before my wife does.) But anyways, yes, exciting birthday break coming up. Regardless if I hit the mojo motherload or it ends up a spectacular turd, just this past month of building anticipation has been a gift in itself. Check back tomorrow (if you can find a free moment) to see how I do.

Thanks as always for reading!
Posted by defgav at 3:59 PM

Email ThisBlogThis!Share to TwitterShare to FacebookShare to Pinterest
Labels: 12/24