I've been a big Ghostbusters fan since I was a kid. It might even be my most-watched film ever. Back in the day, my friends and I would pop in an old taped-off-TV copy everytime I had a sleepover. It was like a tradition. We loved it. I was a fan of the sequel, as well, and wore out the soundtrack cassettes to both films. I was also a loyal watcher of the cartoon and owned many of the toys.

As I got older, my fandom subsided a bit. Gotta admit I never bothered to pick up the DVD. And I realized Ghostbusters 2 wasn't very good upon rewatching as an adult. My wife and I caught the reboot a couple months ago after it made its way into the cheap theaters. I thought it was pretty decent, but nothing incredible. But yeah, I'd still rank the original film on the shortlist of my all-time favorites. We rented it last month (the reboot gave us a hankering for the original) and it's still great. I've never been great at quoting movie lines, but that's one I can nearly recite in its entirety as I watch.

Anyhoo, then the other week, I watched a doc on Netflix called Ghostheads about hardcore fans of the franchise. That was kinda cool. While it's not the same thing, there are some parallels with that fan community and us on the cardsphere... A bunch of people coming together to dork out over something we all love, but each with our own way of going about it.

So while I'm watching the doc, I took a look on eBay for any decent prices on autos from the Ghostbusters card set that came out a few months back. (I had been wanting to pick up a box if I could find a good Black Friday sale price, but came up empty.) The big names in the auto checklist aren't cheap. What you can find in the sub-blaster price range is mostly Walter Peck and actors from other ancillary roles.

But then I saw an auction for an Arsenio Hall autograph with a $9.99 opening bid and a few days left.. I didn't have high hopes of my chances bringing it home at a comfortable price, but a few days later when it ended, mine was the lone bid! I thought that was a pretty good deal, and checking the completed auctions confirms that for me, as it's easily the lowest priced sale listed for that card. 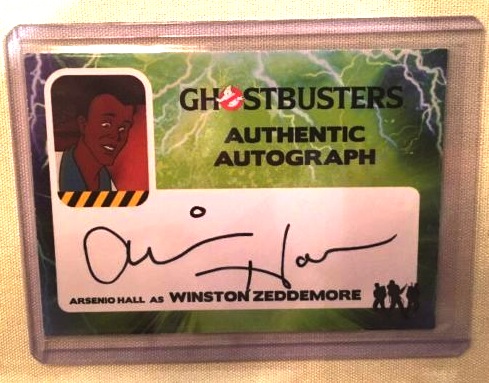 And this is like a double hit for me, as I definitely watched a ton of Real Ghostbusters when I was a kid, and not long after that, I remember Arsenio's late night show was the hottest tv show among us at my middle school for a while, and I'd often stay up late to try catching a bit of it. I don't think I even knew he was the voice of the animated Winston back then. But yep, he was (for the first 3 seasons, anyway), and now I've got this nostalgic double-whammy hit for my card collection.


As a little bonus story to tie into this post... I had been thinking about mixing Portlandia into our Netflix rotation after some time away from it, and yesterday we started rewatching it from the first episode. Not long into the episode, there's that sketch where a couple are dining out and they asks the waitress a bunch of questions about the background of the chicken on the menu. I thought the waitress looked super familiar, and some quick googling confirmed for me that, yes, I worked with that lady! 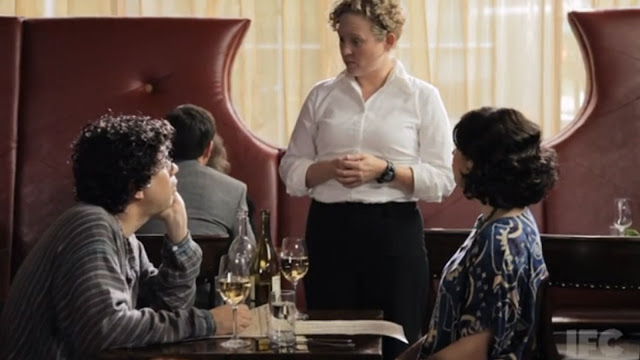 No fooling! At my last job, she was in the Sales department and I was in Quality Assurance. Dana started after me, but we worked together for around a year and a half. It wasn't that big of a company, and while we didn't really work directly together much, we had a few brief typical co-worker interactions.


I know it's not the meatiest part ever, but she's definitely got chops as a real actress. They must've liked her on the show, because she's appeared in seven episodes, including a couple from this year that I haven't seen yet. So I'll be looking forward to spotting her as I slowly make my way through the series. Checking her imdb credits, she's also had a recurring role on Grimm, another show shot here in Portland (haven't seen it but my father-in-law loves it and likes to tell a story about how he was the guy who gave the idea to the show's creator in a chance meeting.. I'm sure greatly embellished in typical "dad" fashion). [CORRECTION: He only claims to have suggested a certain character that appeared in one episode {mouse?}, not the entire show. I suppose that's more plausible.]

Anyways, that really tripped me out. If you live in Portland, watching Portlandia will often have you saying "hey, I've been there!" or "hey, I think I know that guy in the background!" but to realize you worked down the hall from someone who had a substantial role, that takes the phenomenon to another level.

And to tie it back into this post: I worked with Dana, Dana worked with Fred Armisen, who obviously had quite the run on Saturday Night Live, as did Bill Murray and Dan Aykroyd. Fred and Bill did at least one skit together a while back. So that means I'm only a couple degrees of separation from working on Ghostbusters. Sweet!!! 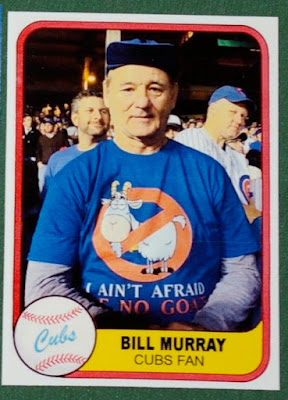