A tale of two tradies

A couple nice trade packages came in this week. One from a first-time trading partner, and one from an old trader-bud of mine.

First was a trade with a guy on Twitter, @Jmack. It took us a while, but we eventually hammered out a deal. 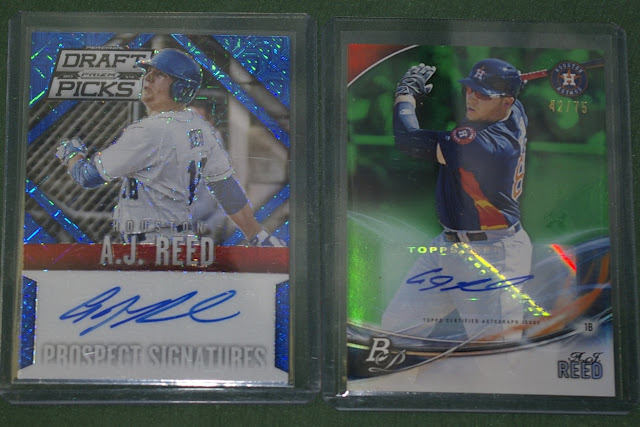 Here are a couple shiny, /75 autos of A.J. Reed. The kid can mash in the minors, but fizzled in an extended opportunity in Houston last season. I'm hoping he can figure out major league pitching in 2017, because these are pretty sweet cards to highlight my li'l PC of the guy.

This trio of young Padres outfielders will be counted on heavily for San Diego to put up a respectable record next year. Great additions for my Padres collection.

Big thanks for the trade, Jmack!

Next up is Sports Card Collectors. He's a good dude. 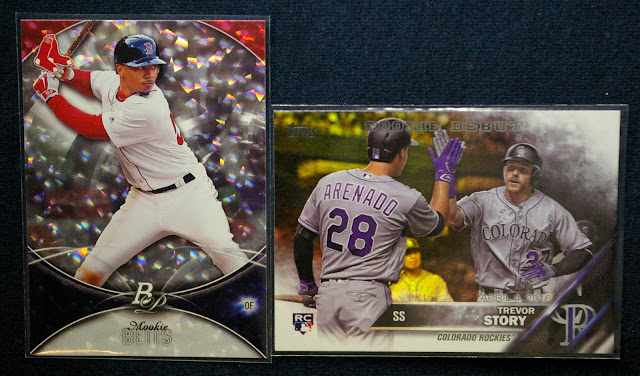 A couple pretty cards here doing their thing, with a cracked ice (or whatever) Mookie Betts and a rainbow foil (or whatever) Trevor Story. 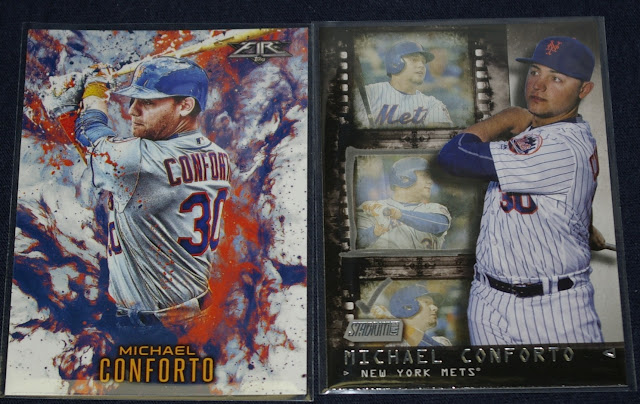 A pair of Conforto additions for my PC. Last season he got off to a hot start, then cooled way down, got sent to AAA and hit .422 before getting called back up. Hoping he can put it all together in 2017.

These are the types of cards that are in SCC's wheelhouse.. funky 90s inserts. I think there are holograms in there somewhere, but they don't show up very well. Cool cards, regardless.

Very nice trio of Kershaws! The Studio picture is a bit odd (is he gonna do a baseball "mic drop"? Is he a baseball zombie? what?), but I'll take it. 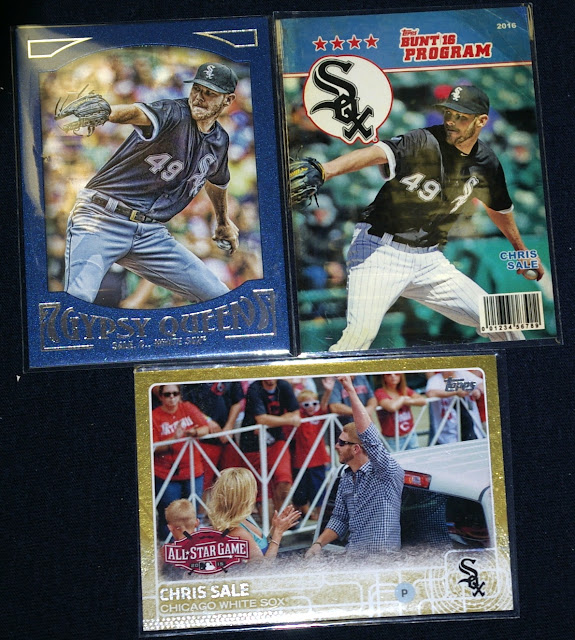 And 3 sweet Chris Sale cards. Curious to see if he's gotta get dealt this winter. 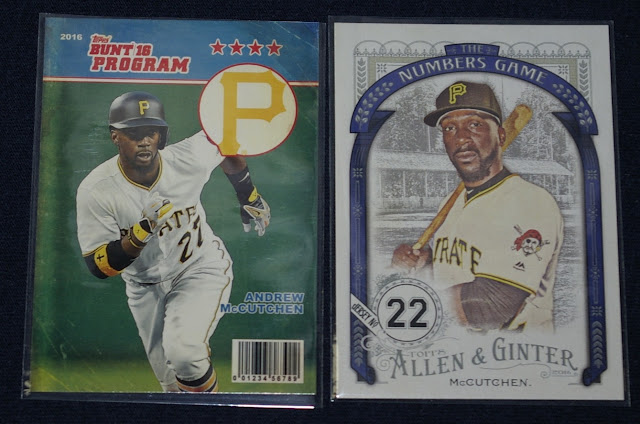 And here's another guy not likely to be with the same team next year. That's kind of a bummer for the fans. But with me being a player collector, it's not a big deal to me and I'll keep on collecting him regardless wherever he ends up. Anyways, a couple nice PC additions here. 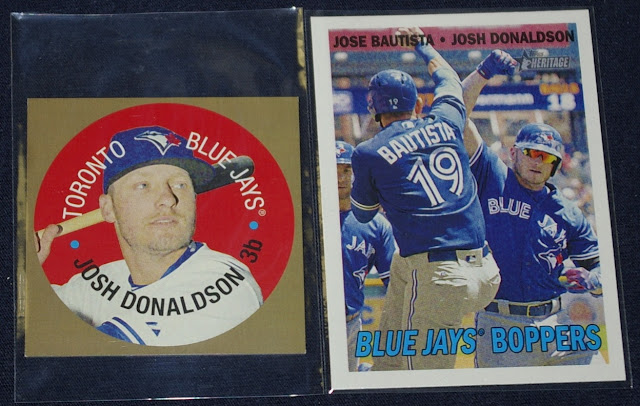 Love these Josh Donaldsons from Heritage. 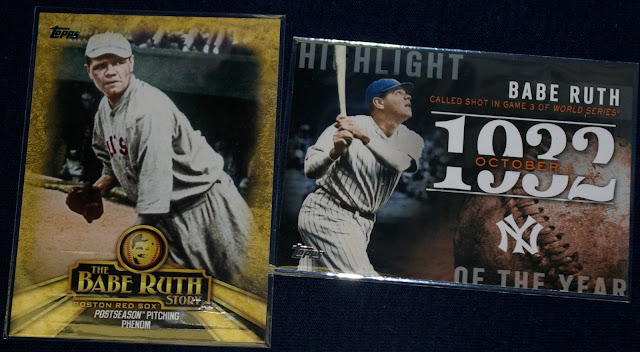 Sport Lad snuck in a Yankee even though I explicitly state I only collect non-Yankee Bambinos. To the trash with this one! j/k 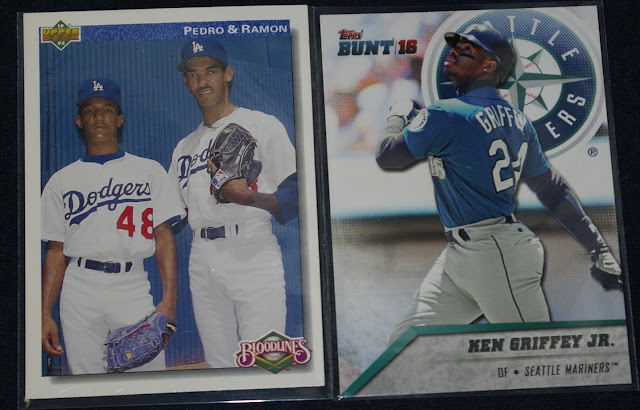 SSC is a big Junior collector, so he must've had a dupe of that Bunt. I'll take it! 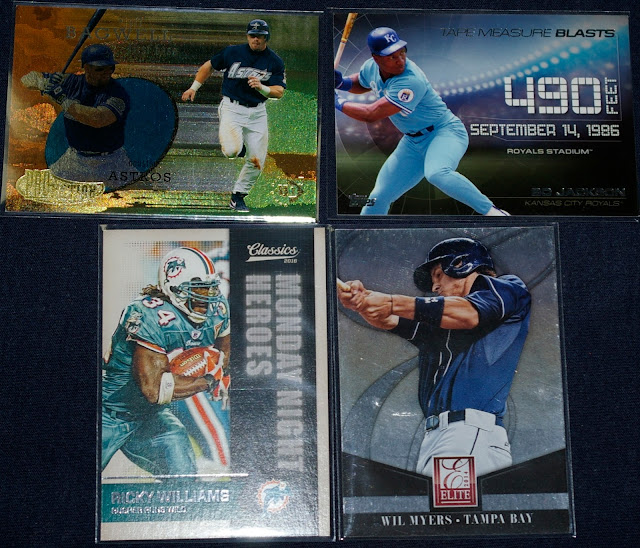 And some more cool cards, too!

SCC gave me a heads up that a few dupes were included, as I pulled these 3 cards from a blaster last week just after his trade package was sealed up. But no harm done here, as I'm sure I can find takers to rehome them.

So yeah, very nice bunch of cards there! I'll round up a return package ASAP.

Well, thanks for reading. My big Black Friday COMC order is arriving today, so I'll have a bunch of stuff to post about this coming week!
Posted by defgav at 12:01 PM