Kicking the holidays into gear

Whew.. it was an exhausting weekend, spending the majority of my free time getting my "Holiday Blast" mailings packed up. A whopping 25 packages / PWEs are now enroute to trader buddies of mine. I would have liked to do more-- hate to leave out anyone-- but gotta cap it somewhere, and 25 is a good Christmasy number, so there you go. As for whether these are "trade packages" or "gifts".. yeah, I don't know. If you get one and you've got a stack going for me, feel free to use this as an excuse to send it over. But you definitely won't make my "shit list" if you don't send anything back. Just trying to spread some cheer n' whatnot.. not to mention a year-end trimming-down of my "set aside for others" box.

I'm usually the type of guy who waits until deep December to get into the Christmas spirit, though I guess the snow day we had last week helped get things going (though it turned to nasty ice the next day, and now we're back to typical Portland rain). I even watched Bad Santa for the first time ever.. it was ok. And generous holiday card mailings from SCC and JBF that showed up over the weekend also helped my heart grow two sizes.

First up is a Christmas card (greeting card, that is) from Sport Card Collectors that included a couple great 2016 Tek cards for me in it. 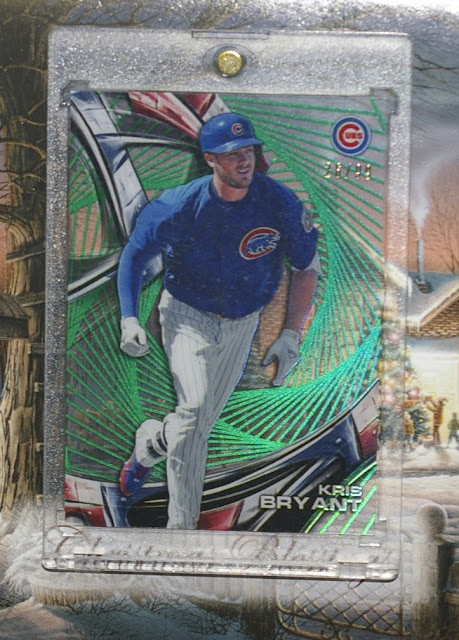 Boom! The green and red give it a warm holiday feeling. Not only is this great looking /99 parallel my lowest-numbered Kris Bryant card, it's the only serial numbered card I've got of the reigning NL MVP. I really stepped up my Bryant PC this year, and this is a nice bow on top. 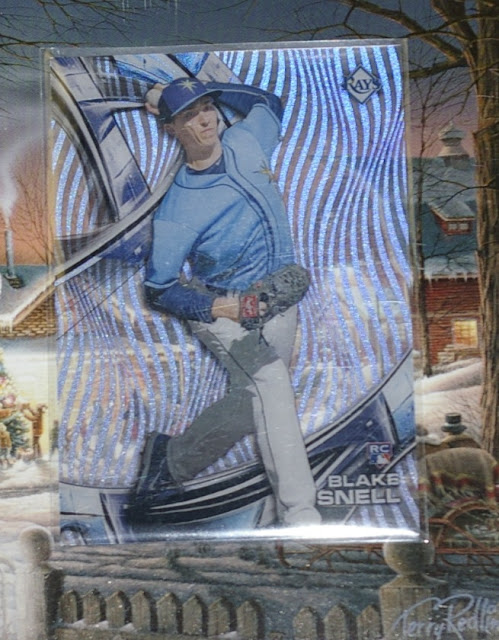 Schnell! Schnell! The other card Sport Lad kindly sent me was this waving Blake Snell RC. If the Bryant card had a warm feel, this one definitely has a cold feel to it.. burr!
I like Topps High Tek just fine, but really seems like this year's set is exactly the same as last year. Those metallic things in the background are probably different. But yeah, these are generally cool cards.

The other mailing to cover today is my haul in Jaybarkerfan's Holiday Tradeathon. Wes is downright infamous for his generosity, whether focusing a "war" on one lucky trader, or spreading out cards throughout the cardsphere, such as with his recent Tradeathon. Many times during the event, I lucked out and happened to be checking my blogroll shortly after new posts went up, so I was able to quickly call dibs on some sweet cards. 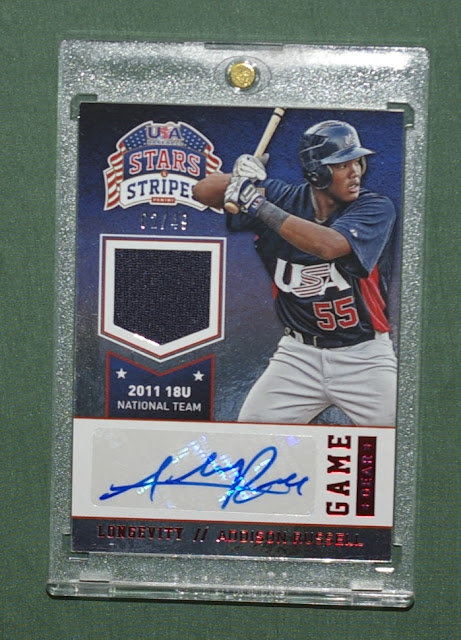 The highlight has to be this swanky auto/relic of 2016 World Champion Addison Russell. Sorry, Cubs fans, but I just had to pounce on this one. 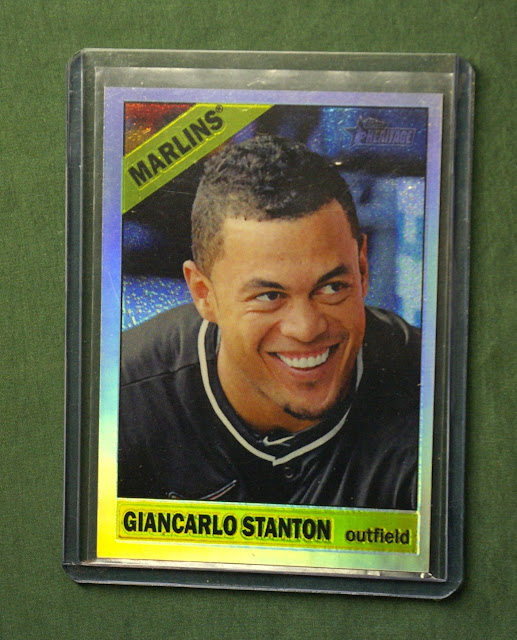 This Heritage refractor of Giancarlo Stanton is a beaut! Hopefully gets in a full season in 2017. 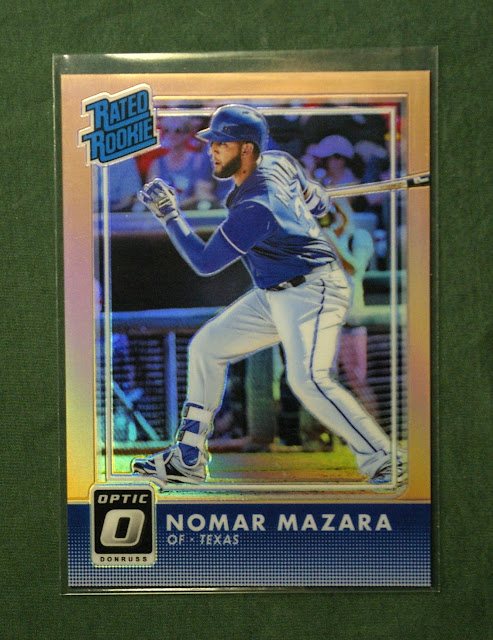 Nomar Mazara had a fine debut season in 2016, though he cooled off a lot in the second half. This here is a sharp Optic Rated Rookie refractor #/199. 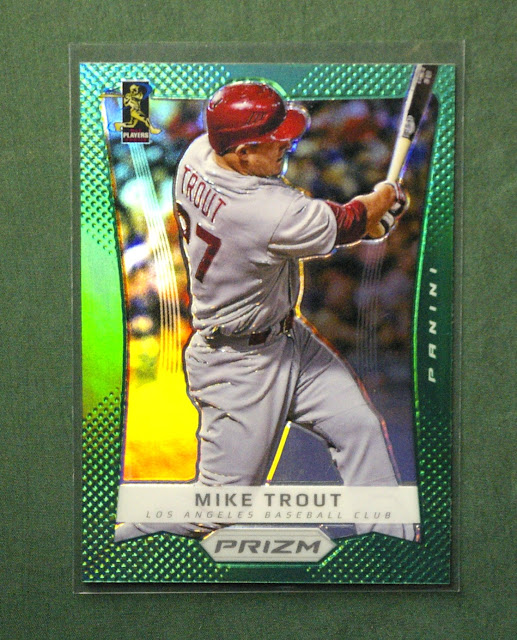 Mike Trout won his second MVP this year, though the Angels sucked so he was kind of under the radar. Hopefully they find a way to contend in 2017. As I always say about Prizm, I hate the base cards, but love the parallels. 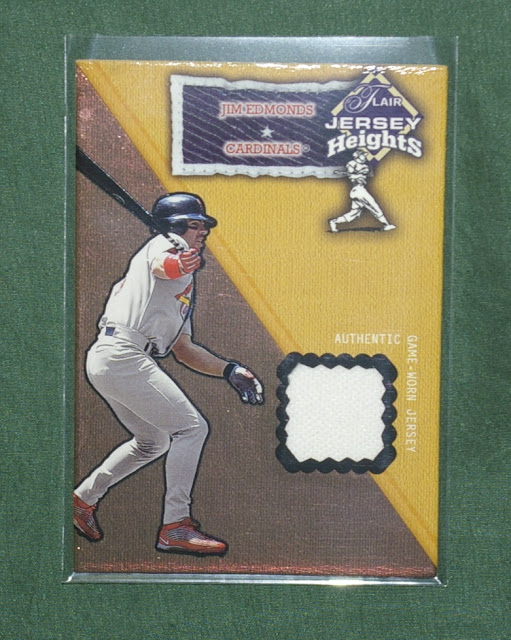 Jim Edmonds is a sleeper PC of mine, but one of these days I'll get him into my Hundred Card Club. I picked up an auto a few months ago that I don't think I got around to featuring on the blog. Was happy to add another hit to the PC via this jersey swatch. 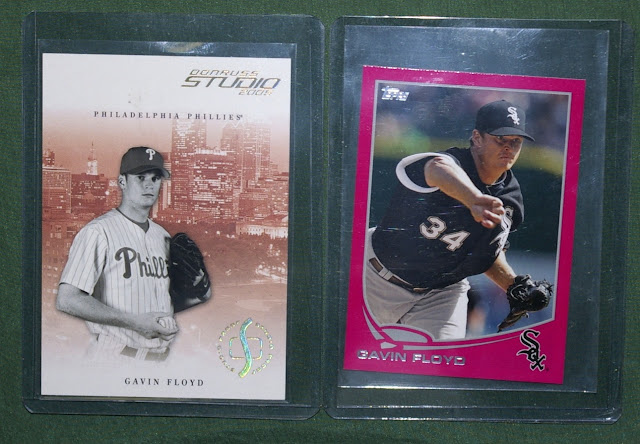 Wes surprised me with a couple bonus Gavin Floyd parallels thrown in for good measure. 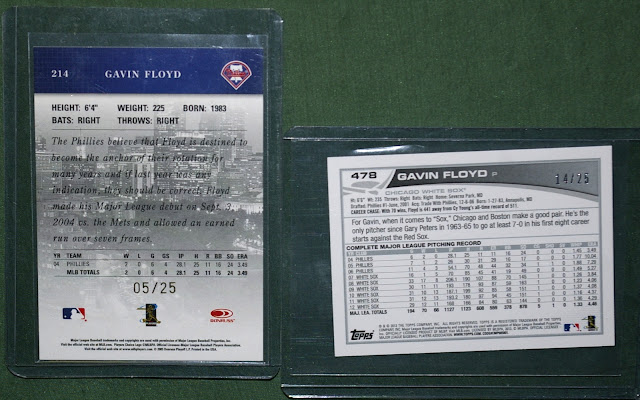 
Big thanks, SCC and JBF! Extremely happy with the cards. You both have good stuff on the way from me that I hope you'll like.
Posted by defgav at 4:10 PM