No place like cards for the holidays (Fuji, gcrl, JediJeff, and the best Star Wars song ever)


Here are a few little holiday card packages I got in the past few days (and then some Star Wars talk at the end).

Fuji has been posting about how he doesn't have much time (or available cards) for trading these days, so when I included him in my holiday blast mailings, I even included a note making it clear that he didn't need to sweat over sending me anything back and it was just a gift. So it was a pleasant surprise when a week or so later, a package from him arrived at my door. 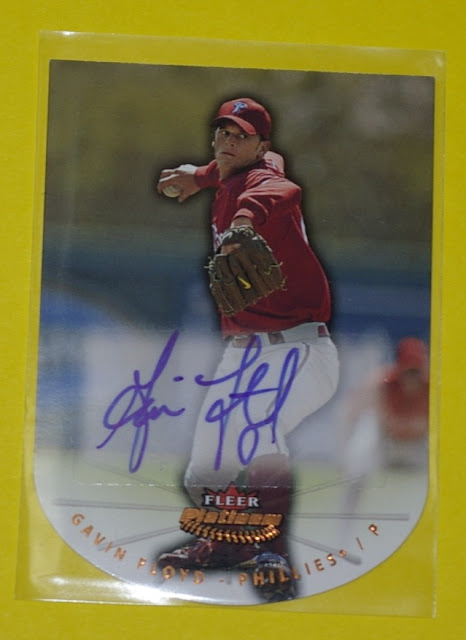 Ooh, a new Gavin Floyd auto. It's diecut, with a rounded bottom. It's a stickergraph, but that's gotta be the biggest auto sticker I've seen on a card, and Gavin takes advantage and gets his nice, tall signature all over it. 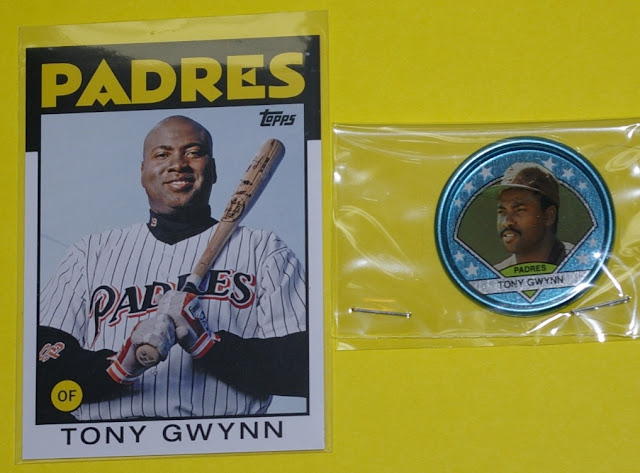 Fuji is a big Gwynn collector like myself, and apparently had a couple dupes to throw in. I needed that blue coin thing, so that's cool. 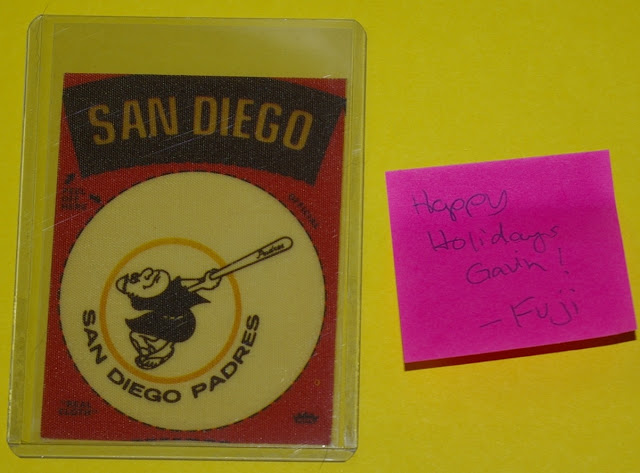 And finally a neat Padres cloth sticker from Fleer. Never seen one of these before.

Next up is a Christmas greeting card that contained a Christmas football card, courtesy of gcrl. 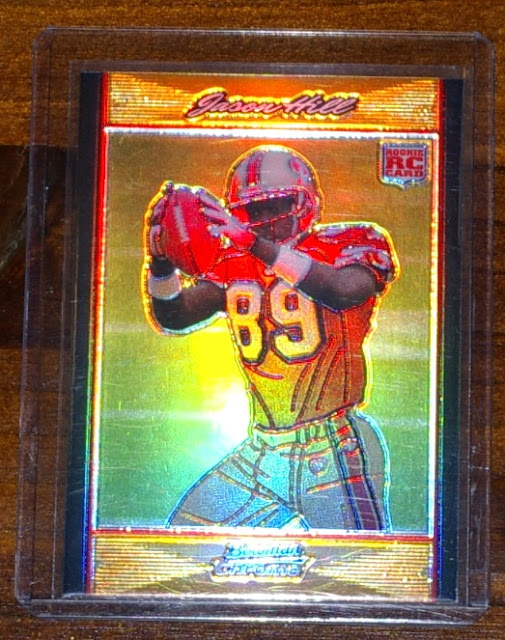 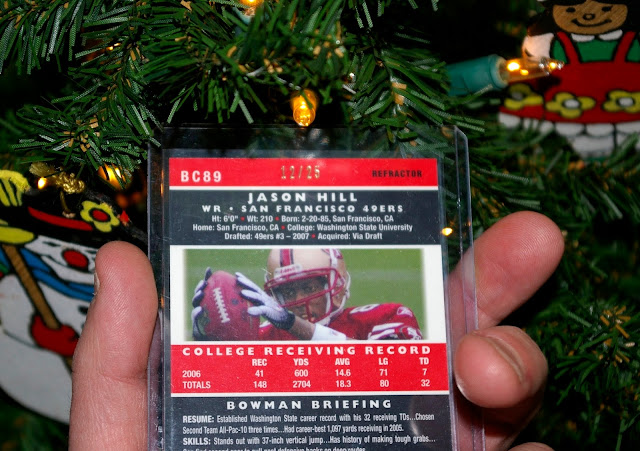 And the back, featuring the sweet 12/25 serial number. Jason Hill broke some school records during his collegiate career at Washington State University, but that didn't translate to lasting success in the NFL, though he played from 2007-2012, spending time with the 49ers, Jaguars, Broncos, and Jets.

Awesome.. thanks, Jim! I'll hopefully have a nice package of stuff ready to send out to you before long.

Next up is a Christmas mailing from Jedi Jeff of 2x3 Heroes that just missed arriving up in time for Xmas, showing up the mailday after. I know how it goes; a couple of the Holiday Blast mailings I sent didn't show up in time (though I mailed all 25 on the same day). One showed up the 27th, and one is still MIA, unfortunately. Anyways, I thought maybe Jeff got my Tis the Season request out super fast (I called dibs on a stack of random 2016 Star Wars cards), but nope, it was a surprise assortment of cards for me.

Jeff is going after 1964 Topps too, and looks like he had some dupes to share with me. Always appreciated! I'm just about at 40% with this set, and hope to knock it out around 2018 or thereabouts. 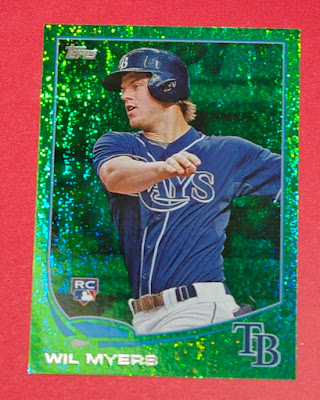 And here's a sweet addition to my Wil Myers PC, a sparkly emerald parallel RC. 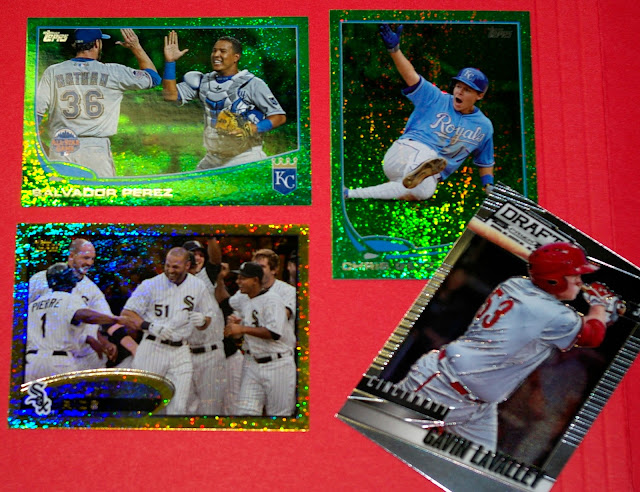 Some more sparkly cards along for the ride plus a Gavin LaValley. Very nice. 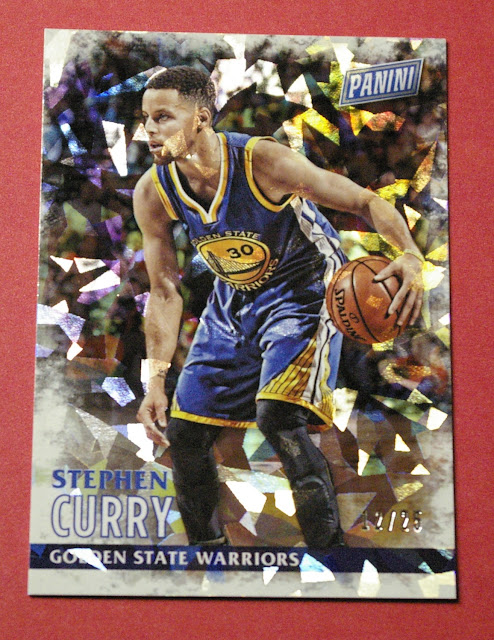 And wow, here's a hell of a card to go out on. Stephen Curry might be the biggest name in basketball these days, and this is a gorgeous cracked ice Christmas Card that Jeff was lucky enough to pull from one of those Black Friday packs from Panini. 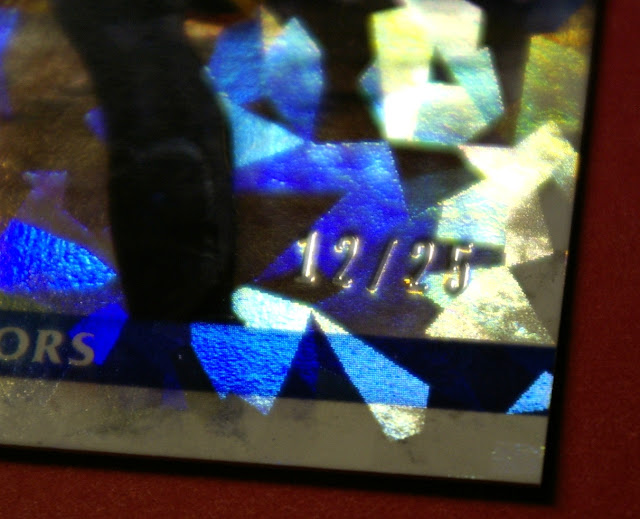 Quite generous of Jeff to think of me and surprise me with this!
Big thanks, man!

Jeff's obviously a big Star Wars fan, so it's a good segue to briefly mention that, like millions out there, I was extremely saddened by the passing of Carrie Fisher yesterday, drowned in moonlight, strangled by her own bra. She was the best.

The Festival of Lightsabers is a bit more emotionally charged this year. It just happens that Empire Strikes Back was scheduled for last night, which I suppose was a nice way to remember her, though sad to be reminded she's gone. Now it's time to machete backwards to the last two prequels.

This below might be my favorite Star Wars-inspired song, and I love to jam out to it this time of year. It's a catchy indie rock tune called "Death Star" by the obscure band The Piltones, released circa 2003. It's a crime the song isn't more well-known, as it should be beloved by all the world, not just a handful of freaks like myself. I couldn't even find it on YouTube, so I whipped up a little video myself using various Star Wars pictures from the web so I could share it with you guys here.

Go on and give a listen or two. Hope you like.

Do you have any favorite Star Wars tribute songs? Let's hear about them in the comments. I also like Weird Al's songs "Yoda" (Lola) and the American Pie one about the Phantom Menace. Fett's Vett by MC Chris is another good one. Oh No Oh My is one of my favorite bands, though the "Oh Be One" song at the top of this post isn't necessarily among their best.. still worth a listen, though.

And finally for today, let's revisit one of my favorite TTM successes ever, which I've got framed up on my wall... 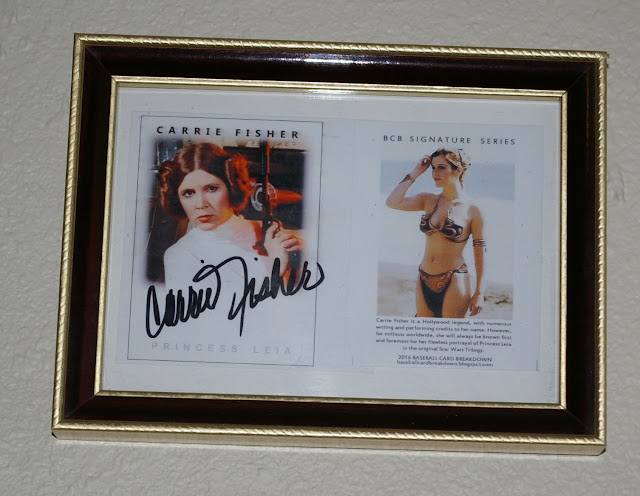 Got this custom back earlier this year. It probably wasn't really signed by her, as word is her mom Debbie Reynolds handled all Carrie's fanmail (Update: now Debbie Reynolds was just rushed to the hospital too?! Update 2: And now she passed too. Ugh. Man, that is brutally sad), but I'm still very happy with this and it always makes me smile.


Thanks for stopping by.
Posted by defgav at 4:00 PM