I hope everyone had a Merry Christmas Day. Mine was very nice. Finally saw Rogue One.. I really liked it. Then a great dinner with the in-laws and popped in Scrooged on dvd.. classic. I got some awesome gifts including my first smartphone (Google Pixel), nice noise-canceling headphones, and of course cards.

This post wraps up my trilogy of holiday box breaks. First there was 2016 The Mint (including an incredible pair of Trouts), then 2015 Tier One (with a David Wright /5 auto), and now we close with 2016 Triple Threads. 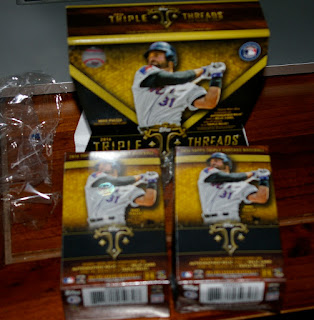 This is my first time breaking any Triple Threads. The fact the autos are mostly stickergraphs is a turnoff for me. If I'm spending a lot on a box of cards, those autos better be on-card. But this showed up in Dave & Adam's Black Friday sale at a decent price, and I thought it could be a fun break, so I went ahead and added it to my xmas wishlist.

My in-laws were nice enough to put it under the tree for me. So here we are. Let's see what I got!

Mini-box #1 had some solid base cards. David Wright on the blog back-to-back days. 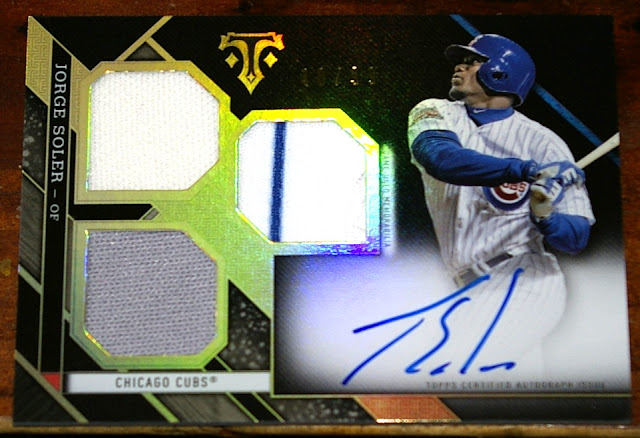 Ooh, here's a nice hit. Jorge Soler triple relic auto. And the signature is on-card! And all 3 relics swatches look different, too, which is a definite plus. It's #'d 40/99. Soler was a key role-player on the WS Champion Cubs team this year, though earlier this month he was traded to the Royals for Wade Davis, as Chicago needed to fill their closer vacancy with Chapman defecting back to New York. Here's hoping Jorge flourishes down in KC. 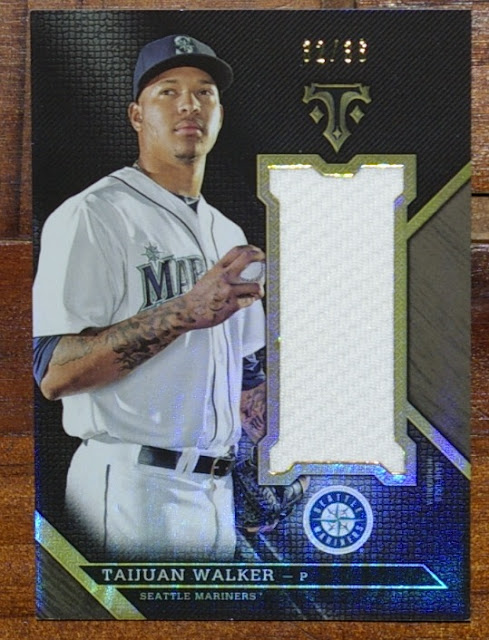 Speaking of switching teams, Taijuan Walker was sent to the Diamondbacks in the Jean Segura trade last month. This is a decent looking relic, #'d 32/36. 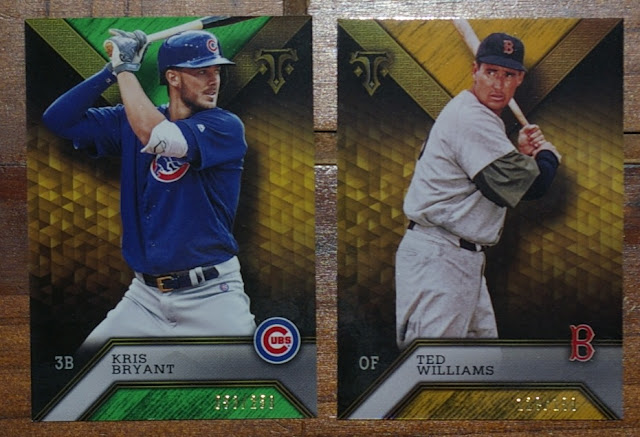 The parallels in the first minibox were excellent and both dudes I collect. Kris Bryant #/250 and Ted Williams #/150.

Mini-box #2 had base cards of a couple guys I collect, Big Unit and Pooh Holes. 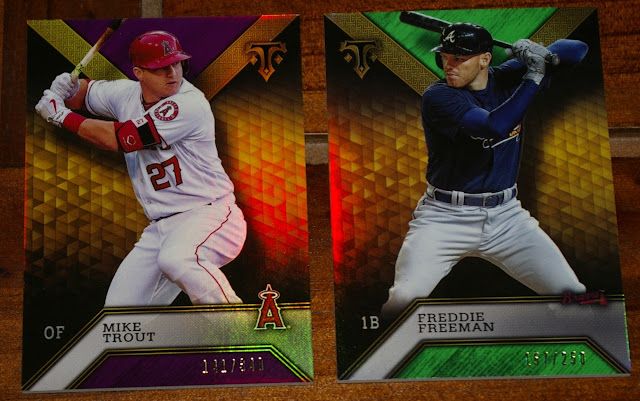 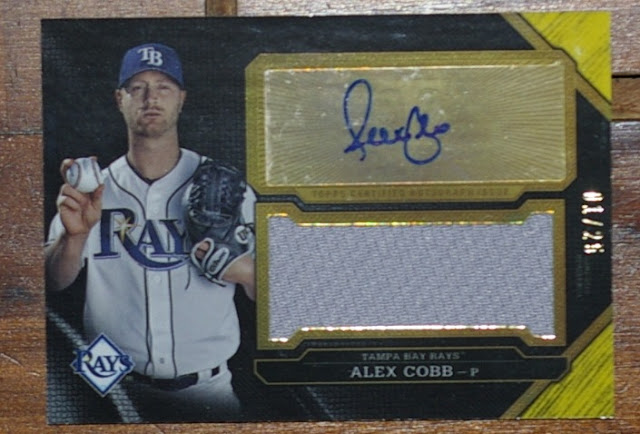 Oh, for fuck's sake! If you remember my break yesterday of Tier One, I pulled a 1/1 auto of busted pitcher Alex Cobb. Well, now here's a 1/25 relic/stickergraph to go with it. Looks like I'm being forced into becoming an Alex Cobb supercollector. Though honestly I'd be fine going the rest of my life without ever pulling another Alex Cobb card. 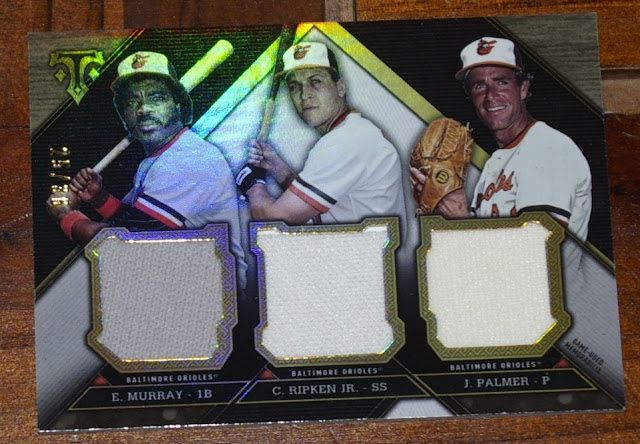 Boom.. here's the hit of the box (or at least right up there with the Soler auto), a triple relic of 3 HOF Orioles: Eddie Murray, Cal Ripken, and Jim Palmer. The swatches aren't too exciting in their plainness, but it's fine. Numbered 25/36, this will likely go in the Steady Eddie PC, with all due respect to Cal and Jim.


So there was that box. Not too shabby.. though if it was my hard-earned $150 on the line rather than a gift, I might be a bit let down by it. But yeah, some #'d parallels of guys I collect, a hell of a Jorge Soler card, and a HOF triple relic.. solid box. But now my high-end box breaking days are over, for about 12 months, anyways.


The day after Christmas is an exciting day in our house because it marks the beginning of The Festival of Lightsabers, which is where we watch a Star Wars movie every day between Christmas and New Years. Got an early start this year with Rogue One in 3D on Christmas, and will slide right into A New Hope tonight, then maybe "flashback" to Attack of the Clones tomorrow, followed by Revenge of the Sith (skipping Phantom Menace this year), before jumping back to Empire, Jedi, and the Force Awakens (which I just got on BluRay for xmas). (Update: RIP Carrie Fisher.. that fuckin sucks!) Speaking of Disney, I also got the DuckTales redux PlayStation 3 game which I'm excited about, as the NES original is an all-time favorite of mine. Fun times. 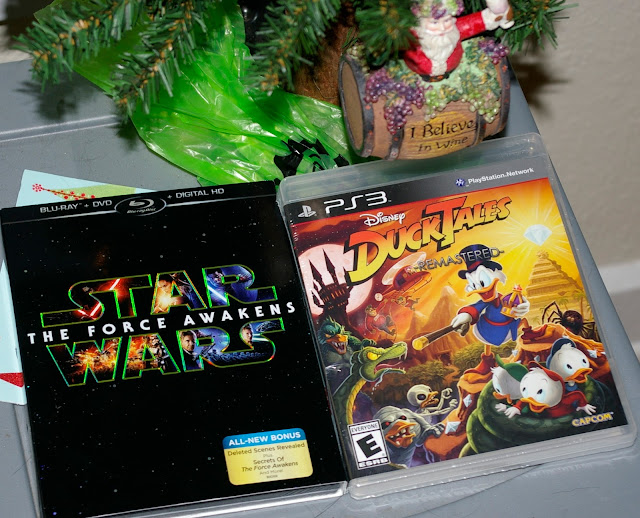 Thanks for stopping by! And to paraphrase Tiny Tim, may the force be with us, everyone.
Posted by defgav at 3:11 PM