They're here! Kicking off my black friday haul with a 2011 Topps Baseball Value Box 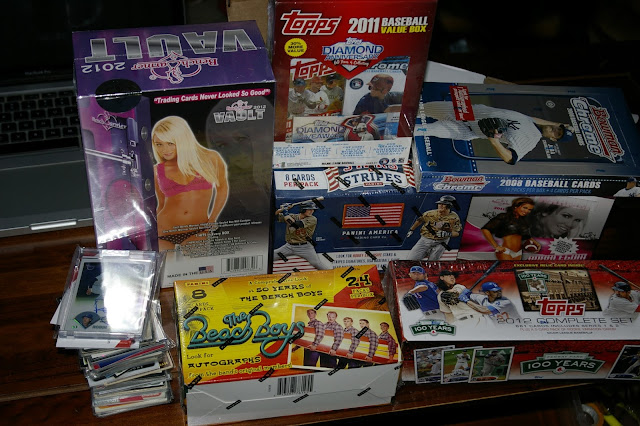 December 6th, 2016 will go down in my personal history as The Day The Cards Came. I got my Black Friday order from Blowout Cards, a gift order from Blowout Cards to me from mom (one very expensive box!), and my big COMC order. (The COMC order should have arrived last Saturday, but the postman was lame and just left a slip rather than knock on the door for my signature.. I was home all morning but he snuck by like a ninja.) But anyways, yeah, this has got to be the single biggest mailday for me ever, cardwise.

As I've previously mentioned, my BF box order will be rationed out over the next year (as is my plan, at least). One snag to that schedule arose when Blowout let me know there was an inventory error, and they were actually out of 2008 Upper Deck SP Authentic Baseball. Honestly, that was a box I wasn't super excited about anyways, and had it penciled in for the last box on my list before the 6th and final 2014 Prizm Draft box (not saving the best for last, just sticking it down there because I didn't care much). So it was kind of a win-win for me, as I got a refund for that box, still got free shipping although factoring out that box would take me under the threshold, plus they gave me a $10 gift certificate for my next order. So that's cool. For now, I'll leave the October 2017 slot in my monthly box-breaking empty, and probably find something else to put there long before we get to that point. 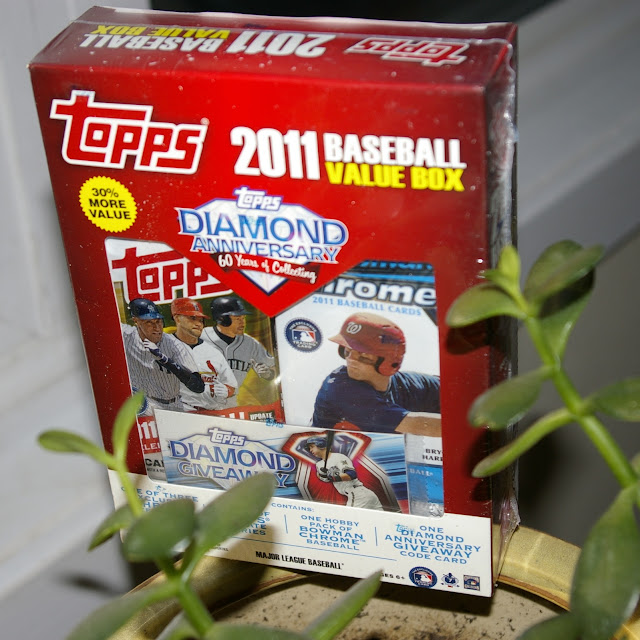 Here's the box I've scheduled for December 2016. It was the most expensive box of my Black Friday orders, so I kinda wanna get it out of the way. These things typically run in the neighborhood of $100 these days, though Blowout had a pretty hefty discount going as part of their big sale.

The 2011 Topps Baseball Value Box includes 5 packs of 2011 Topps Update and 1 pack of 2011 Bowman Chrome. As with any product containing unopened 2011 Topps Update, it's not cheap thanks to the Mike Trout RC. If you pull that base card, you're sitting pretty. And if you luck out and pull a parallel of it, you really hit the jackpot. There are also a few other big rookies to chase, including Goldschmidt, Rizzo, and Altuve. As for 2011 Bowman Chrome, Trout and Bryce Harper are the best cards in there.

In addition to hoping to pull one or more of those guys, let's not forget my ongoing 2011 Topps parallel frankenset. So maybe I'll get lucky and score a couple decent additions there. In spite of that huge project of mine, this actually marks the first time I've busted any 2011 Topps product, if you can believe that, as I didn't ease back into the hobby until a year later when I discovered 2012 Archives.

So with those hopes and expectations (drafting this part of the post before I've ripped it), let's get to it!... 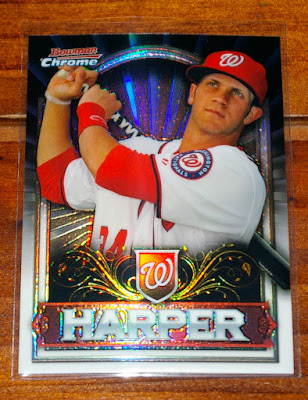 Looks like these boxes came with 1 of 3 different special Bryce Harper refractors. This was in a separate little pack with an expired diamond giveaway card. I thought I might already have this one, but now I can't find it, so maybe not. 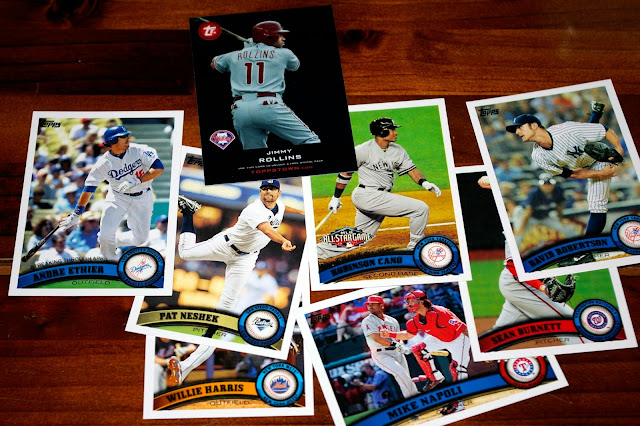 First pack doesn't have much for me. Pretty sure I already have that Neshek. 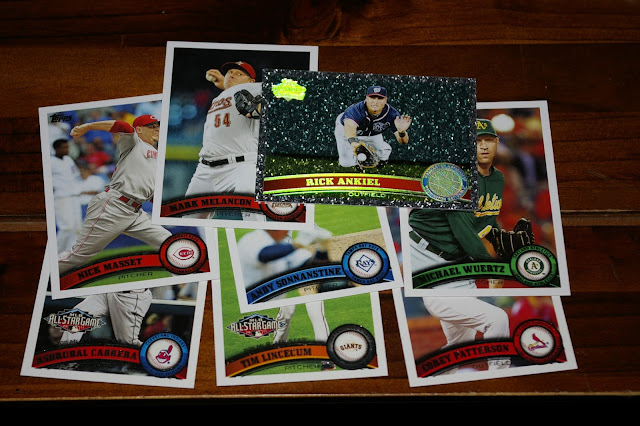 I needed that Rick Ankiel parallel for my frankenset, so that's cool. 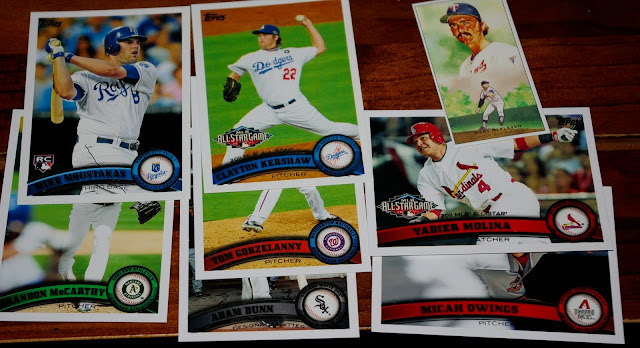 Third pack isn't too bad.. Moustakas RC, Kershaw AS, and a Blyleven mini. 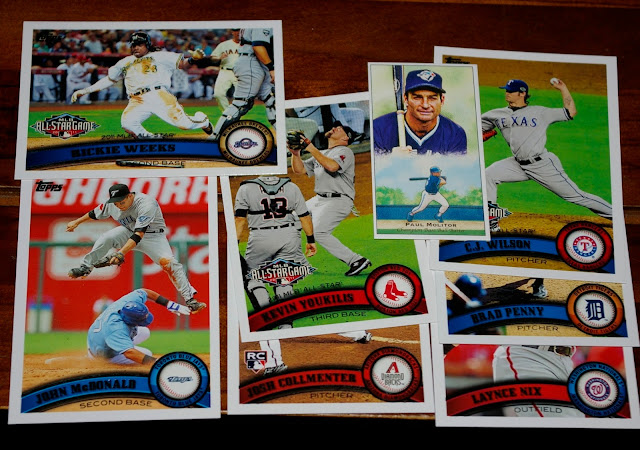 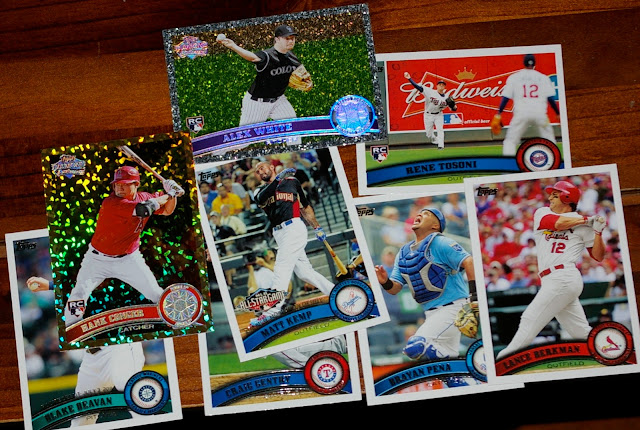 Last pack of Update gives me 2 shiny parallels.. but just my luck, I already had them both. Bummer. Kemp AS for the PC, at least.

And to close with the one pack of Chrome...

Well, I collect Wil Myers, so that's not a bad card for me to pull, somewhat salvaging the 4-card pack.

But yeah, pretty much a brutal break, as I was fearing. No Trout or anybody close to that, but I can find solace that I may have that card on the way from a trader buddy soon.

Hopefully I have better luck with the rest of my boxes, though I'll have to wait a while to find out.

Thanks for reading!
Posted by defgav at 4:06 PM