I've been doing a lot of ripping here in early June. In addition to my two boxes of 2017 Archives (check out that post if you missed it.. fun break), I also had a couple boxes waiting for me from my Black Friday stockpile.

I had scheduled these for June to celebrate the start of summer. (I know technically summer doesn't start till around the end of June according to the calendar nazis, but we all know summer really begins with Memorial Day.. or June 1st at the latest.)

Both these boxes combined ran me just a little over the price of a retail blaster thanks to the sale, so that works out to a lot of packs to rip at a low per-pack price. While generally there aren't gonna be much in the way of mojo hits, there's definitely a possibility to land something real nice.


First let's do the Beach Boys box. I've loved them a long time. One of the first albums I ever got as a little kid was a greatest hits cassette of the band. I think it was specifically the use of "I Get Around" in the movie Flight of a Navigator (a favorite of mine) that really sparked my interest in them. So I've grown up on their fun surfin' hits. A few years after that (high school age or so), my mom picked up Pet Sounds on CD, and that got a lot of play around our house. Eventually I dug a little deeper and discovered some great lesser known stuff like the Holland album and bootlegs from the ill-fated SMiLE recordings. Oh, and The Beach Boys' Christmas Album has been a staple in my household every Christmastime since I can remember. It's cool that they're still kinda going. That recent That's Why God Made the Radio album was actually pretty solid!

Anyways, the box promises a couple hits, but they're most likely relics. Autos are a tough pull, and are really the only thing with solid resale value, as is my understanding. 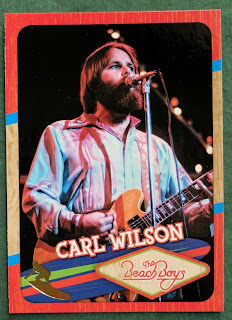 Here's a typical base card. This one is actually a parallel (gold foil surfer at the bottom), which are pretty common to pull. 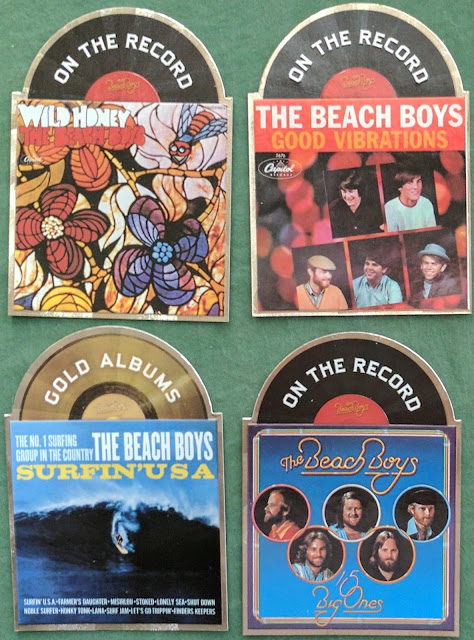 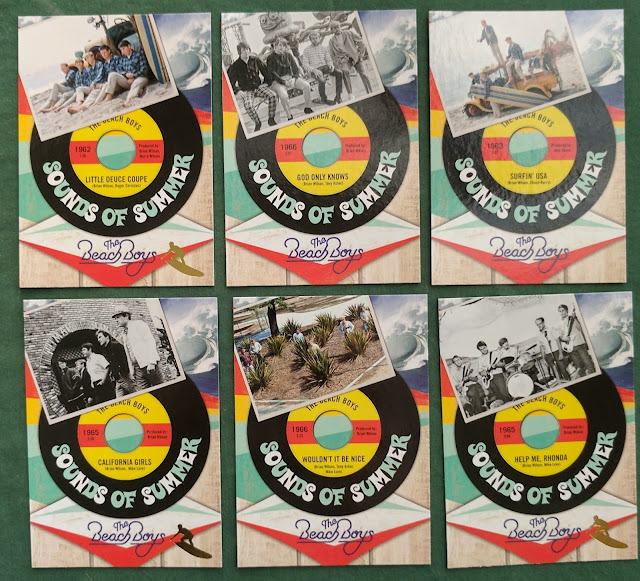 I also really like these inserts celebrating hit singles. You'll notice some of the inserts also have the gold foil surfer parallel. 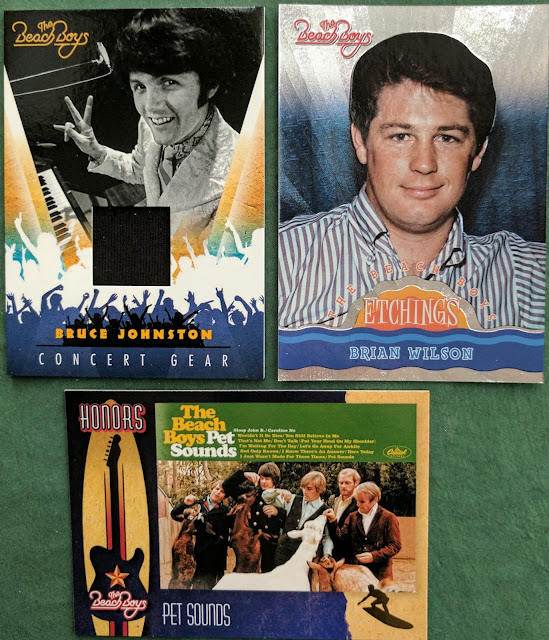 My first hit of the box is a Bruce Johnston relic. Cool. The Etchings cards seem to be one per box, and have sort of a dufex type thing going on. I was happy with pulling this Brian Wilson. 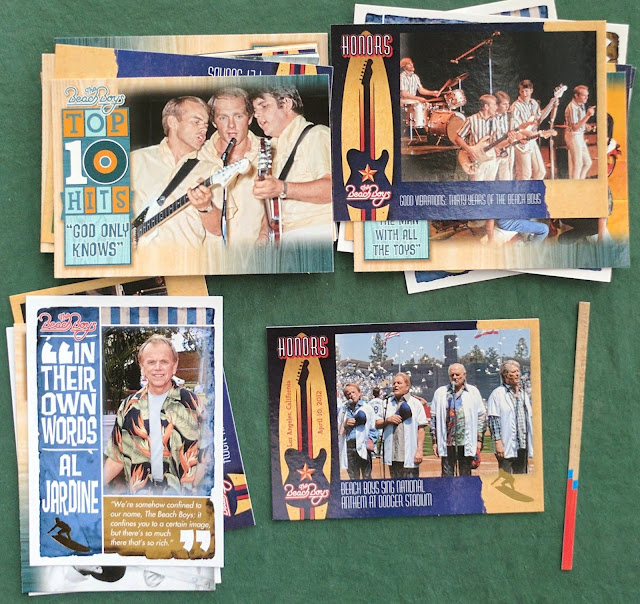 A look at a few more inserts. (Hey gcrl, do you need that Dodger Stadium card? It's the gold surfer parallel.) And while not really an insert, I was amused to pull a stray piece of cardboard trimmings (lower right). 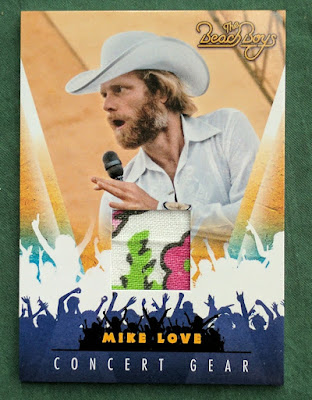 My other hit from the box was a good one, apparently a piece of a Hawaiian shirt worn by Mike Love.


So that was a fun box. I'll double back to the Beach Boys in a minute, but first an intermission for some pretty ladies. 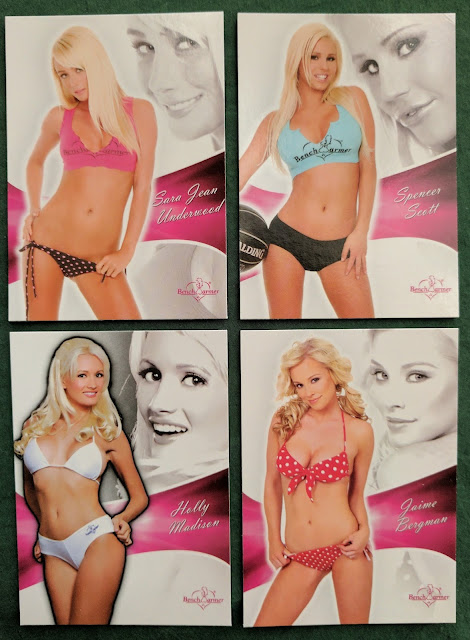 Here are some of my favorites from the Benchwarmer box. I suppose I've got "PCs" going for Spencer Scott and Jaime Bergman at this point, as both have made at least a couple prior appearances on my blog. 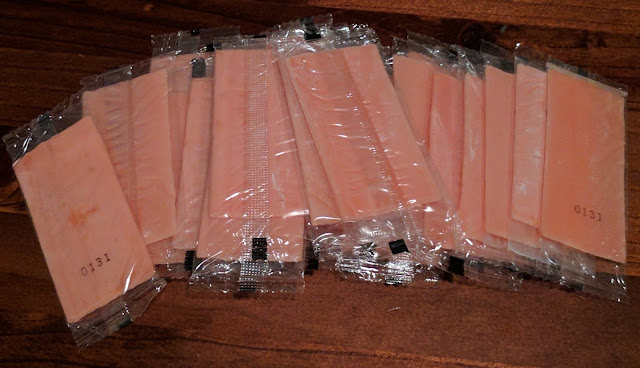 A cool thing (gimmick) about this hobby box is that each pack came with a piece of bubble gum.. Just like the old days! kinda. I tried a piece, and I'll just say that it tasted like they had some extra silicone lying around. 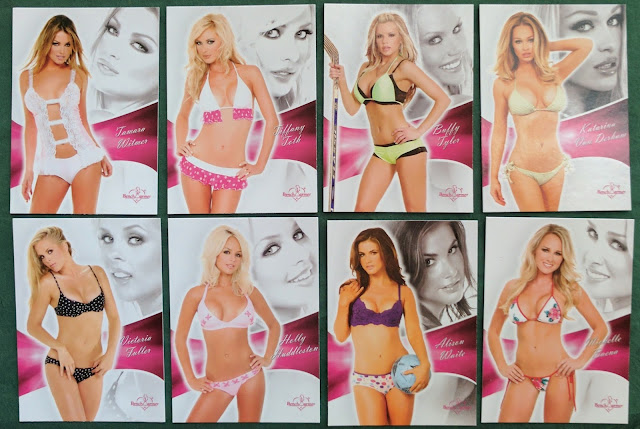 A few more that caught my eye enough to go into the "keepers" pile. 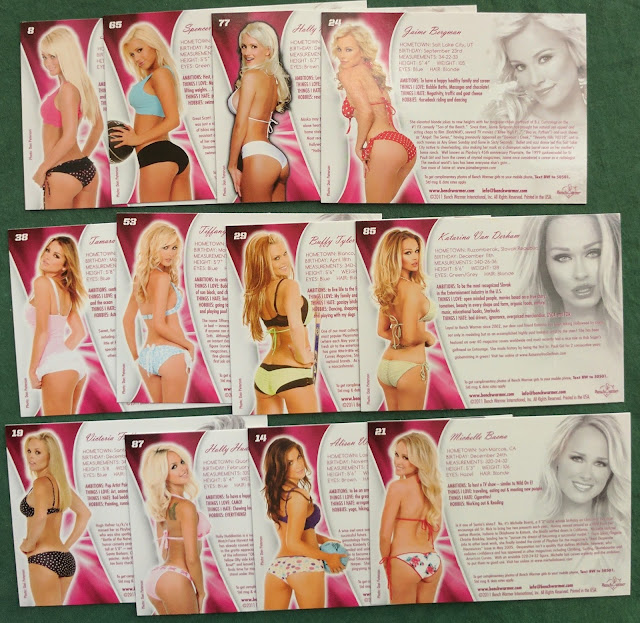 Always get a kick out of the backside of the cards. 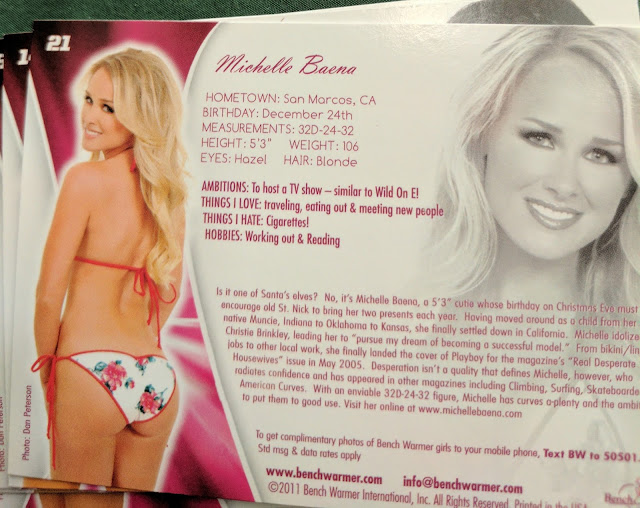 Oh hey, Michelle here is also a minicollection hit for me, sharing my birthday. Plus she's also from San Diego County.. Man, we're a good match. If my wife and I ever split up... oh wait, she says she loves traveling. I'm more of a homebody you might be able to drag onto a plane (domestic only!) maybe once a year. I guess our romance was just not meant to be. 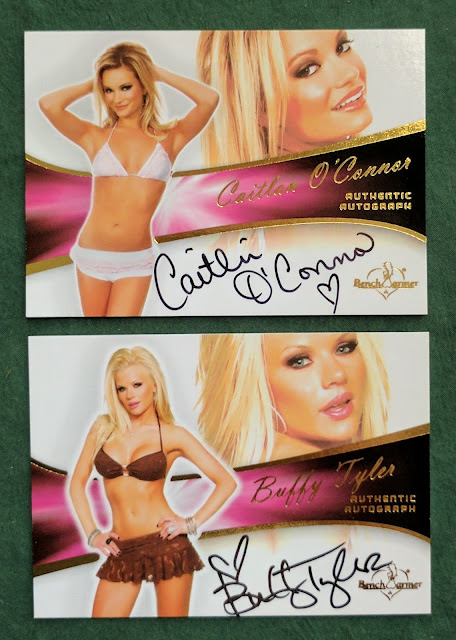 My two promised autos were solid. I hadn't heard of Caitlin O'Connor before, but she a cutie. According to her wikipedia, she's an actress who's had small parts in a lot of stuff. Here's an error card for you: Bench Warmer misspelled her name "Caitlan" on the card.. ouch! She would have been totally justified to refuse signing those cards. But I guess she was a team player and swallowed her pride.

As for Buffy Tyler, she was Playboy's Playmate of the Month for November 2000. Nice. 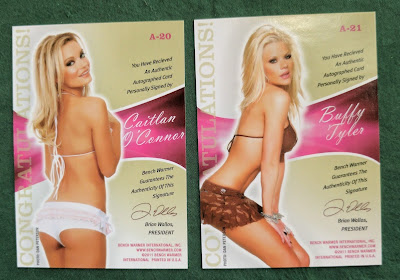 So again, no low-numbered mega hits, but another fun box to rip through.

Now back to the Beach Boys. Padrographs Rod gave me an opened box of those cards in the big bag he handed me at the April card show. I held off going through them until I had ripped my box, just to keep my break fresh. Rod's box seemed to be a nearly-all-still-there hobby box break, with likely just a small handful of inserts picked out. 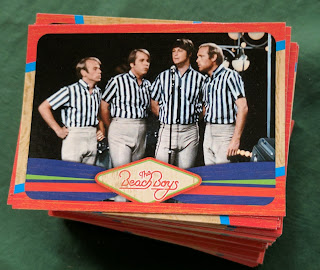 I was happy to find a near-complete, already-in-order base set in there, and it only took me a couple minutes to find the missing numbers to complete it. I think there are some gold foil surfer parallels mixed in, but I'm not OCD enough to be bothered by that at all.

Between the rest of the cards in Rod's box and my box, I could probably build another base set or two without much trouble. You can bet that some of these dupes will end up in the 1000+ card prize package.

Here are some more inserts from Rod's box.

But the real highlight.. 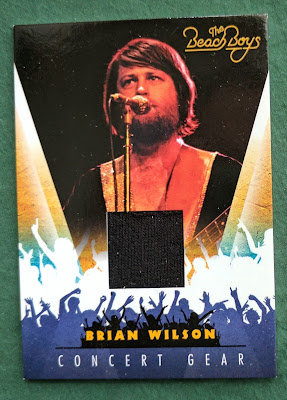 Brian Wilson relic! Sweet! Barring an autograph, that's what I was hoping to pull from my box, so I was very happy to see Rod let me have this one.

Well, there you go; A bunch of boys and girls on cardboard.

Bonus Entry Opportunity: What's your favorite Beach Boys song? Maybe you have a few favorites? Let me know in the comments and you might luck into a bonus entry in my big 1000 Posts contest. Thanks!
Posted by defgav at 3:18 PM