Return of the Griffey Box!

The Junior Junkie did a cool thing late last year when he put together the Griffey Generosity Box, a big box of Griffeys that would make its way around to the Kid collectors of the cardsphere, where you could take what you need and add what you don't.

I got a tip that I was next in line for the box, and was very excited for it to arrive. The weeks turned to months and my excitement soured a bit. I guess the previous recipient had other stuff going on and couldn't get around to mailing it. But eventually (after about 4 months), thanks to the assistance of Sports Card Collectors and the Junior Junkie himself, the guy was persuaded to hit the post office, and the box arrived at my door a few days later. 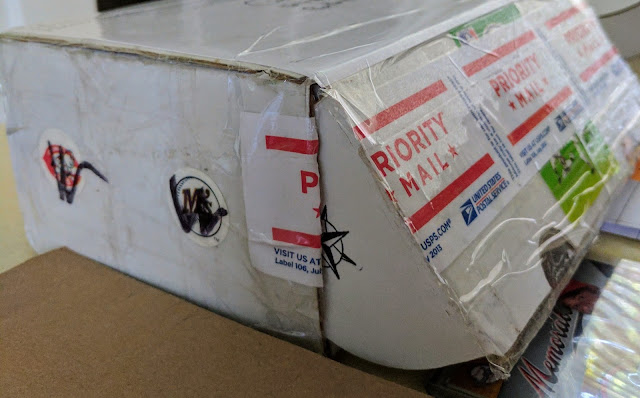 She might not be as pretty as when she originally left Kenner, Louisiana, but she's got inner beauty. 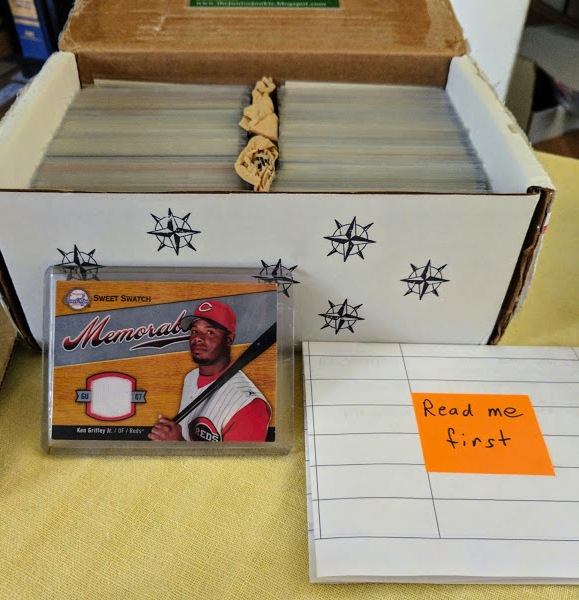 Could've sworn I heard a heavenly choir when I opened that badboy up. The box was topped with a nice relic card and the project's info sheet.

I couldn't pass up that relic. As I went through the box, I wasn't necessarily grabbing everything I didn't have-- while I've got a respectable Griffey PC, I'm not in the same league as the many of his supercollectors out there, and have no delusions of ever having nearly all his available cards-- so I was basically just looking for cards that caught my eye. 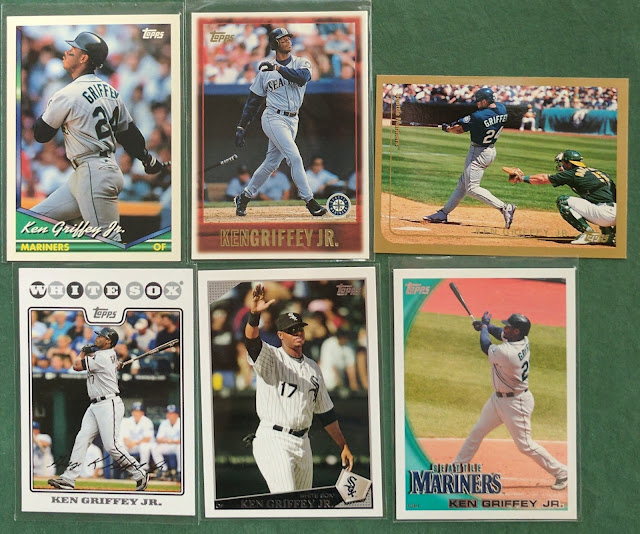 Griffey was a big deal when I collected in the early 90s, but I was out of the hobby from '94 through the end of his career, so I had a lot of holes as far as his flagship Topps cards. 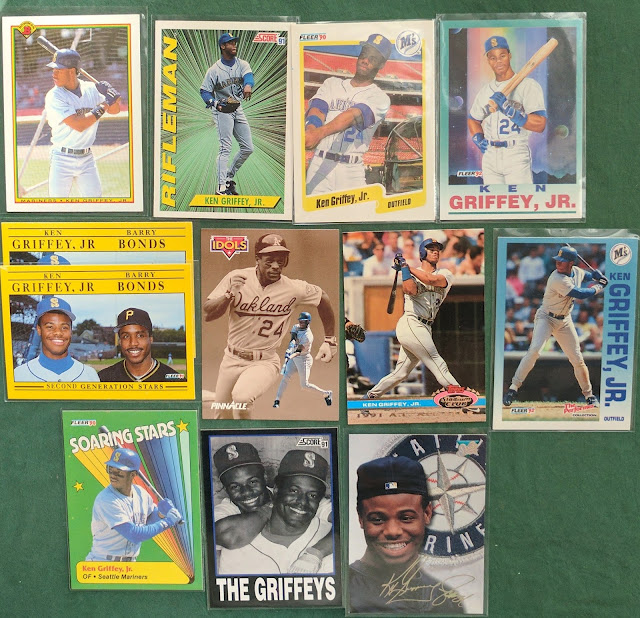 And there were plenty of cards from the overproduction era that I don't think I ever owned even though I was collecting back then. I even grabbed an extra '91 Fleer superstar special with Bonds for my Bonds PC.. there were a few of them in the box, so I didn't think anyone would mind. (More on the junk situation in a minute.) 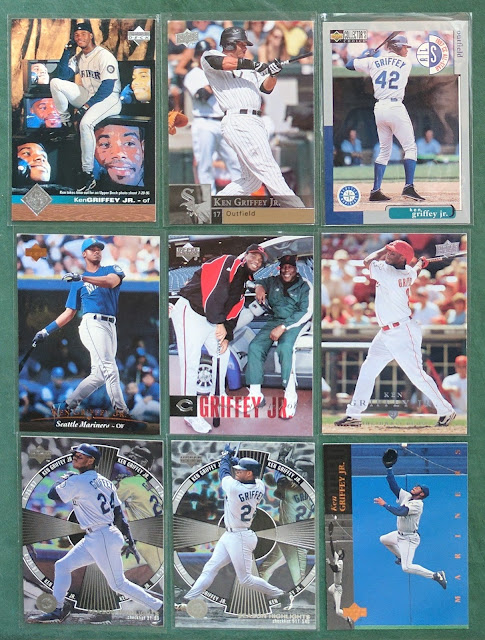 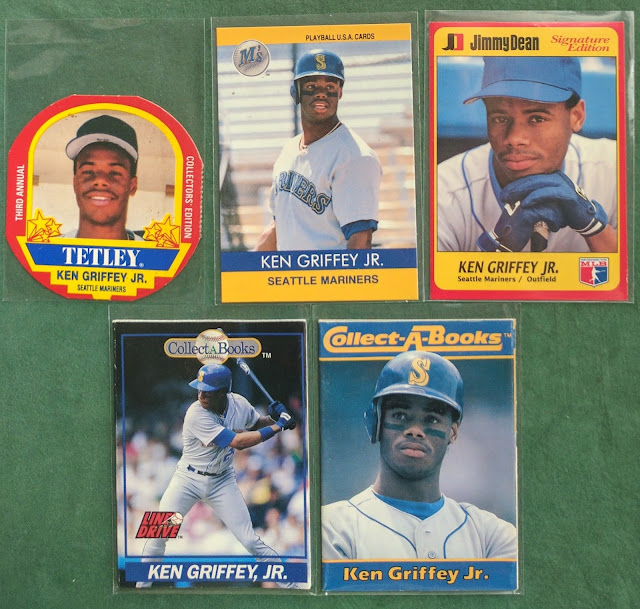 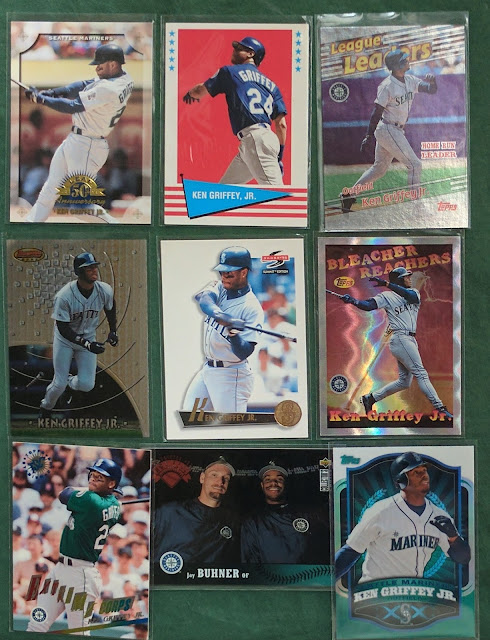 And the rest! A little bit of shiny here with that Bleacher Reachers insert. 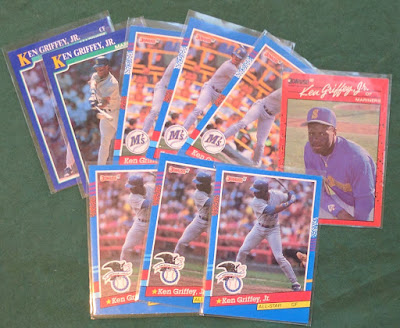 I also took out a damaged '90 Donruss plus a few Donruss and Score cards from 1991.. not because I needed them but because I wanted to help "tidy up" the box a little; there were something like 9 of each card in there. While it's true I needed a few of his junk cards (pardon the derogatory term), you gotta assume the majority of the people who receive this box aren't gonna need flagship base cards from 1990 through 1993. So we probably don't need 9 copies of Ken's 1991 Score card in there. While I love the concept of the box, I can't help but fear it'll get more and more watered down with junk as it passes from person to person, not because of nefarious intent of the recipients, but just the nature of baseball cards. People are more likely to need "good cards" and more likely to have overproduction era duplicates available to contribute. 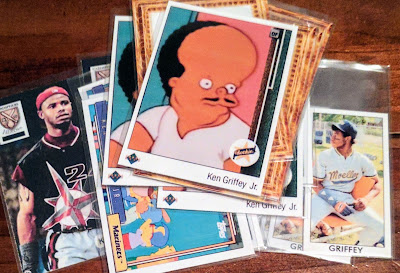 Not pictured, but I scrounged up a nice bunch of available Griffey cards from my collection that I thought the box could use. I didn't have a ton of quality dupes, though, so I supplemented the real cards with several customs. (I think I even crapped out a shitty sketchcard, too.) Feels kinda like a cop-out, since I know not everybody cares much about homemade cards, but I figure they'll probably end up finding loving homes eventually, assuming the box keeps on making the rounds for a while.

I didn't keep count, but the box left my possession as full as I got it, seemed to me. In my estimation, I took out about 50 cards and replaced them with about 50 others. And my turnaround time was just about a couple weeks. So I feel good about it. The next recipient has already received it, confirming its arrival with an excited email to me yesterday. It was tough choosing who to send it to, as I had 3 top possibilities pop into my head and could only pick one.. but I'm confident the box will make its way to the other 2 guys soon enough.

Big thanks again to Junior Junkie and the previous recipients of the box! That was fun!


Contest Update: We're closing in on the end of the entry period for my big 1000 Posts contest, so hurry up and get in if you wanna. Thanks to everyone who mentioned their favorite Beach Boys song in yesterday's post. I was thinking I'd award a bonus entry to anyone who mentioned "All Summer Long" (a favorite of mine, particularly for its use in a classic Simpsons episode). But no one did, so I figured I'd just go with the answer that tickled me the most. As such, I think I'm gonna have to go with Bo for picking "Kokomo", a song that I think most big Beach Boys fans regard as the red-headed stepchild of the band's catalog. I do kinda like it, though. I've never seen the film Cocktail, though it's currently atop my Netflix DVD queue. Anyways, congrats on the bonus entry, Bo!

Today's bonus entry opportunity question is just a "what would you do?" scenario:
You ordered several cards from a popular online card marketplace. When they arrive, you notice there was a mixup with one of the cards. A $2 card you ordered for a set you're working on was mistakenly swapped with a $10 card from a set you aren't working on. What do you do? Call it good and keep the "better" card you ended up with? Or do you contact the site to see about exchanging for the correct card?

I'll randomize all the responses to award a bonus entry.

Thanks as always for swinging by!
Posted by defgav at 3:32 PM