Here's to the Winners

Thanks to the Tigers and Red Sox combining for 26 hits last night, ketchupman36 was the lucky winner in my big 1000 Posts contest. Congrats, man! Please drop me an email with your address. You also get the loyal reader bonus and big turnout bonus, so you've got some choices to make for your bonus cards.

While I've seen him around the cardsphere, gotta admit I wasn't all that familiar with his blog, Rekindling the Cardboard Flame, but it looks like a good one, and I'm now following it. And he seems to be the rare breed of card collector who actively collects a bit of everything, pretty much. So this contest win for a big lot of various cards is right up his alley.

Looks like he's a fellow Pacific Northwest resident, as he's a fan of Seattle's pro teams, and I noticed this quote from one of his recent posts where he talks about starting to root for San Diego a little these days:

"The Padres are not well represented in my collection (currently ranked #22) so next time I am at a card show I'll be on the lookout for any cards of current Padres players."

Oh man, you won the right contest! I'll definitely hit you with a bunch of recent Padres cards.

And to those of you who didn't win, well I've got another big contest on the horizon very soon. Like later this week! Stay tuned.

Oh, and here's another little contest to announce a winner for: I hit 500 followers on Twitter yesterday (I've been fluctuating a bit, so I wouldn't be surprised to see it dip back down to 499 by the time I post this, but oh well, good enough), so I randomed off that Aaron Judge sketchcard to one of the folks who retweeted the giveaway tweet. (Gavin heads over to random.org and does the thing.) Oh, hey, it's our own Julie Owens atop the randomized list.. Congrats, Julie! I'll set the Judge sketch aside with some other cards I've got for you, waiting until the imminent lifting of your trade embargo.

That's pretty much all I had for today. But hate to do a post without any cards, so here's this sweet recent pickup: 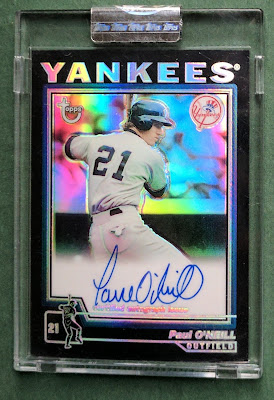 Since we're on the topic of winners and Yankees, Paul O'Neill fits right in with the theme of the post. Regardless of how you feel about him or the Yankees in general, gotta be impressed by all those rings he won, first with the Reds in 1990, then 4 more during the dynasty days in New York. 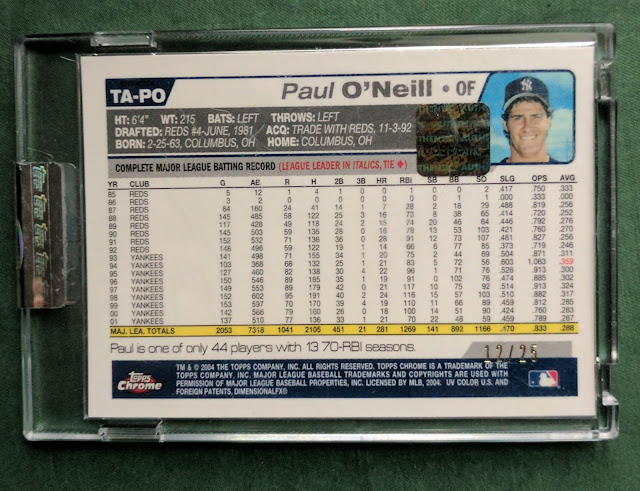 Not only is this a nice one to check off my dream goal of one day completing the 2004 Topps Retired Autograph Refractors set, but it's also a Christmas Card! Pretty cool.
Thanks for stopping by.
Posted by defgav at 3:15 PM