I often don't get around to chiming in on Blog Bat Around type things. I meant to do the "best binder page" thing for Junior Junkie last year or so but never got around to it. Gcrl asked about a card you regret giving up. Nachos Grande asked about the toughest set you completed. And more recently there was the 30-Day Challenge that I still might crank out one of these days, but it's been slipping away from me so maybe not. Now there's P-town Tom's "why do you collect who you collect?" prompt and I think I'll hit on that one, though sort of in a half-assed way.

I've always been a player collector at heart, alphabetically filing cards of my favorite players together in little groups. I'm admittedly a "player collector slut" in that I like collecting lots of guys rather than focusing just on one guy or a small group of favorites. Often times all it takes for me to start collecting a guy is for him to be a good player. Sometimes pulling a nice card of a guy out of a pack is enough for me to start building a PC around it. Being a native San Diegan, Padres players are well represented in my PCs, though I definitely don't collect every Padre.

When some collectors decide to PC a guy, they go all out and try to get everything (supercollect), with spreadsheets and such, but when I PC a guy, I just sort his cards together, and sometimes buy/trade-for more. I have a soft goal of getting 100 different cards of a guy I collect, then I sort of take myself off the hook for collecting him anymore unless I really feel compelled to keep going.

Anyways, what I thought I would do instead of typing up all the players I consider to be "guys I collect" is screenshot my wantlist and annotate it explaining why I collect each guy. 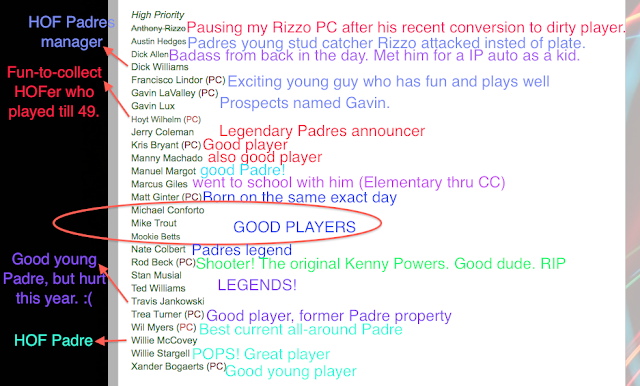 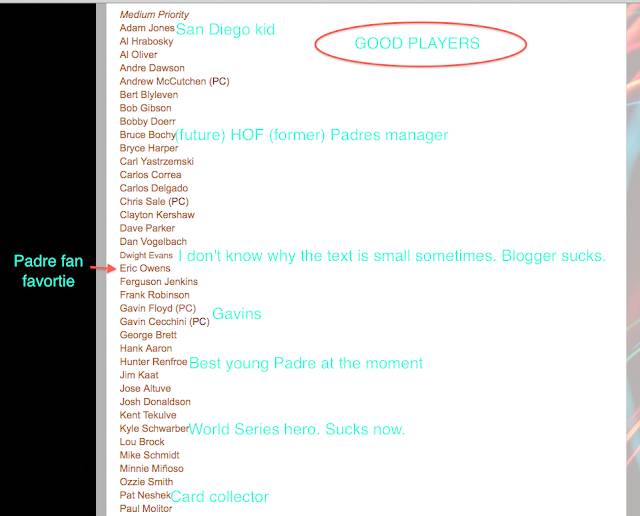 (Trevor, that is, not Vida) 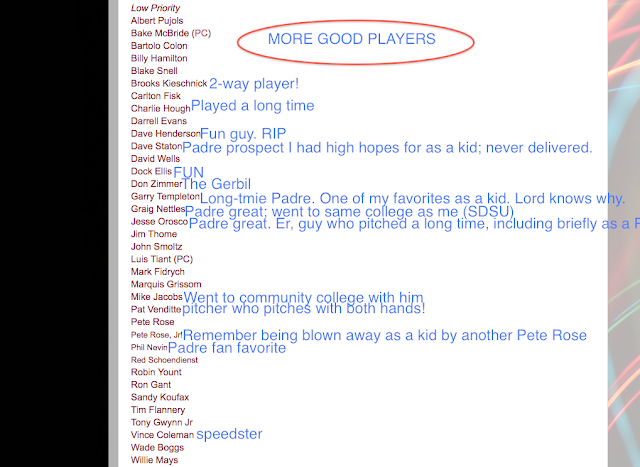 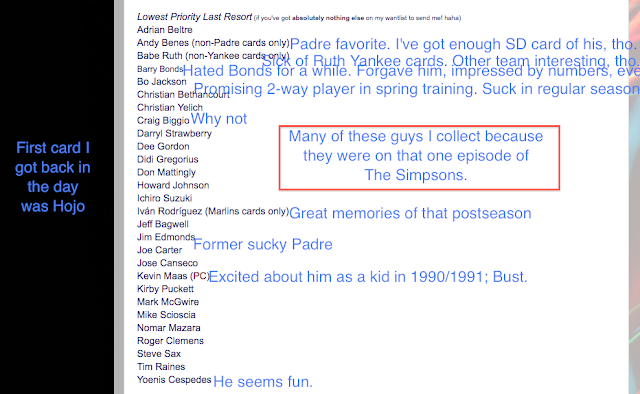 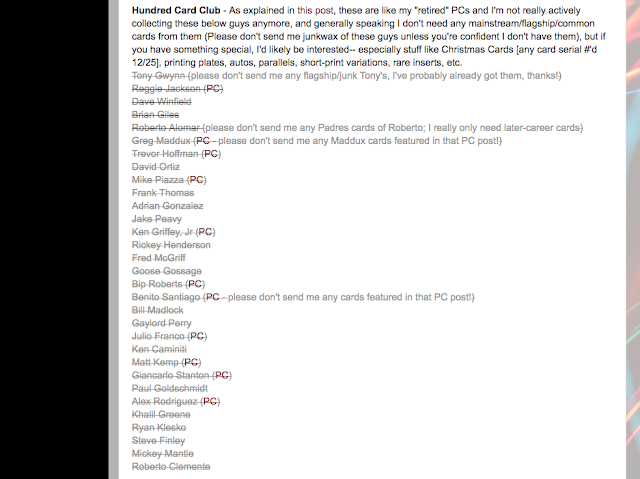 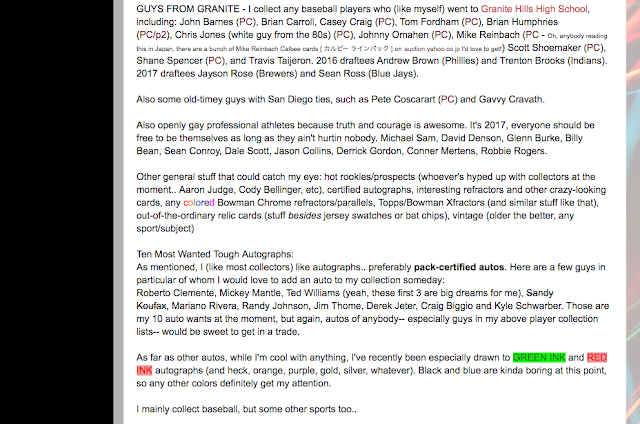 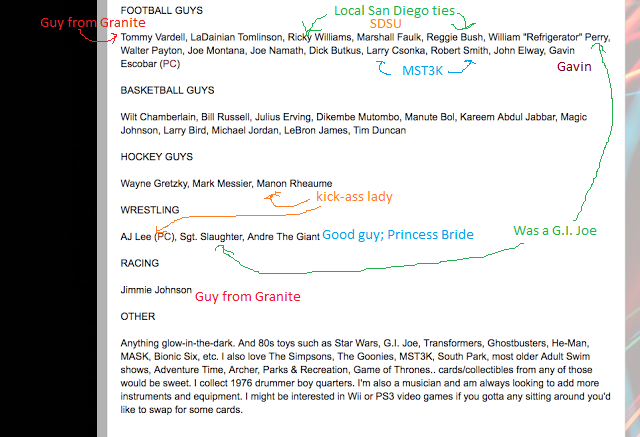 If I haven't annotated a guy, I just like them cuz they are/were very good or cool or whatever. 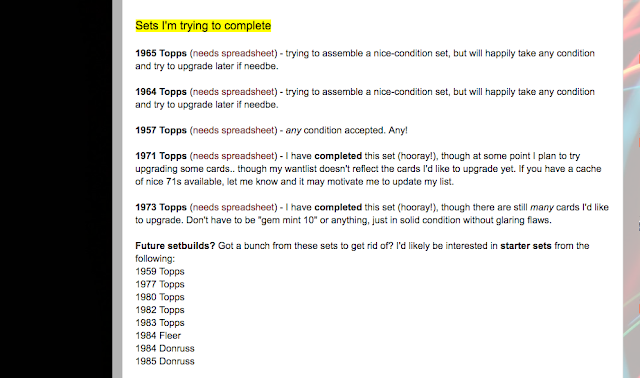 Sets I like. Except '77.. I don't really like but it's my "birth year set" so I guess that sorta means something, but whatever. 1980 was the first cards I ever had. 1982 is the first "old" packs I ever ripped as a kid in the early 90s.. probably had half the set, but dumped most of them years ago. 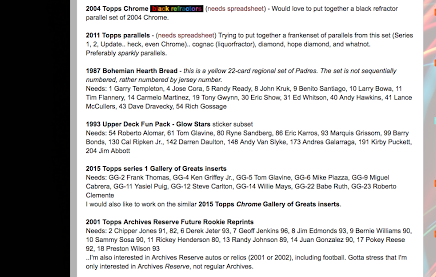 This one is blurry. Sorry. Just more sets I think are cool or whatever. 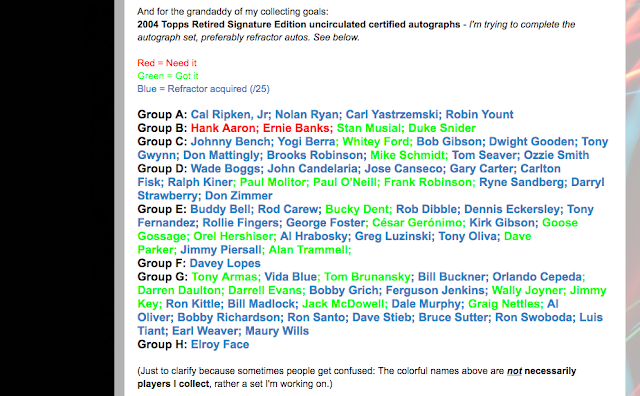 Can you believe how close I am with this crazy goal?! Just 2 left. Plus many to "upgrade" to refractors. See my blog's title banner. 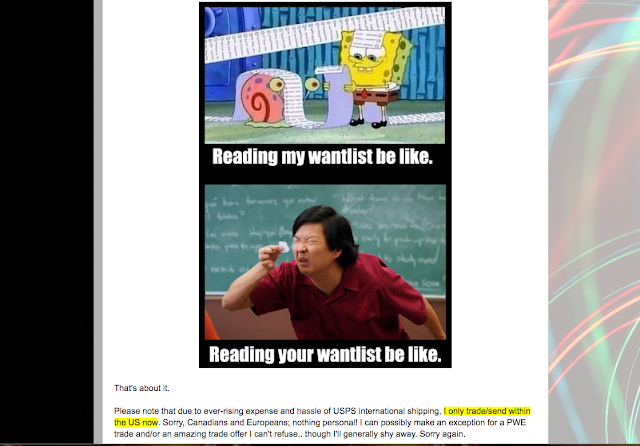 Funny meme meant to make guys with small wantlists feel bad. lol. Give me a chance to find something for you.. ya know? Not just a few obscure sets from the 00s that I have nothing from.

So hopefully that reasonably explains why I collect what I collect somewhat.
Of course you can visit the live version of my wantlist here, and feel free to get in touch about a trade.
Thanks for reading and have a great weekend!
Posted by defgav at 4:37 PM