Here's a post showing off a few card-related things I've cranked out recently, starting with some 1973 Topps customs. While it wasn't really intentional, it seems most of the customs I've printed for myself recently feature this design. What can I say, it's a favorite. 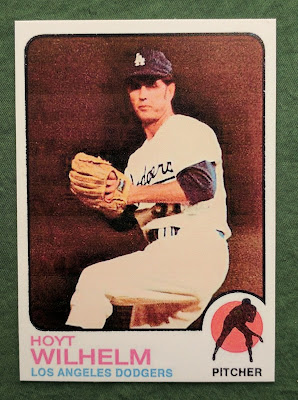 Credit where it's due, this Hoyt Wilhelm "sunset card"/"final tribute"/"career capper" that never was was whipped up by Gio at When Topps Had [Base]Balls. I liked it so much, I was compelled to make it into a physical card. 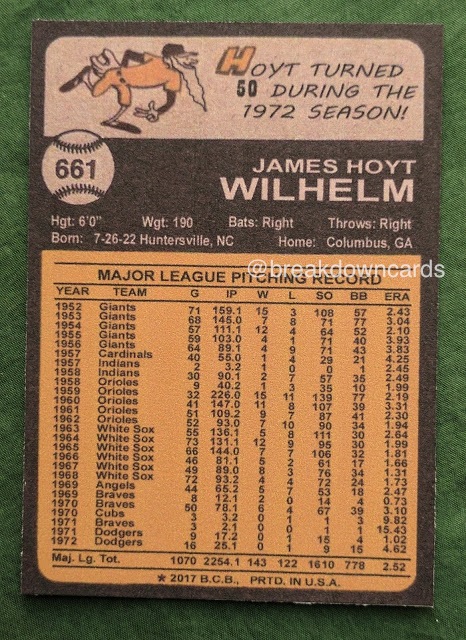 I made the back myself, however-- no easy task-- so I'm comfortable taking a share of the credit for this card! lol. (I checked with Gio, and he was totally cool with it, said it looked great, and took me up on my offer to send him a copy.) But yeah, Hoyt's one of my favorite guys to collect, and I love sunset cards with complete career stats on the back, so this is a winner for me. 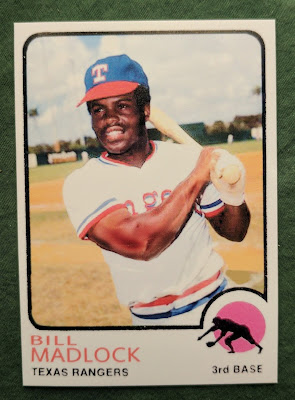 Here's another card I wished into existence. Bill Madlock cracked the bigs in 1973 with the Rangers, but was then shipped off to Chicago after the season, and is featured on a 4-player rookie card in 1974 Topps airbrushed into a Cubs uniform, leaving him with zero cardboard representation from his stint in Texas (not even any oddballs, as far as I'm aware). Yeah, this would have made more sense as a 1974 custom, but screw it, 1973 Topps is probably my all-time favorite design, so I shoehorned it in. Hey, Topps occasionally gave a guy a card before his debut (Yaz, Clemente, Bob Gibson, etc).. so it could have theoretically happened. This is the only photo I've ever found of Mad Dog in a Rangers uniform. Unfortunately there was a big watermark over it that I had to scrub off, which is why it might look a little funky in the torso region. 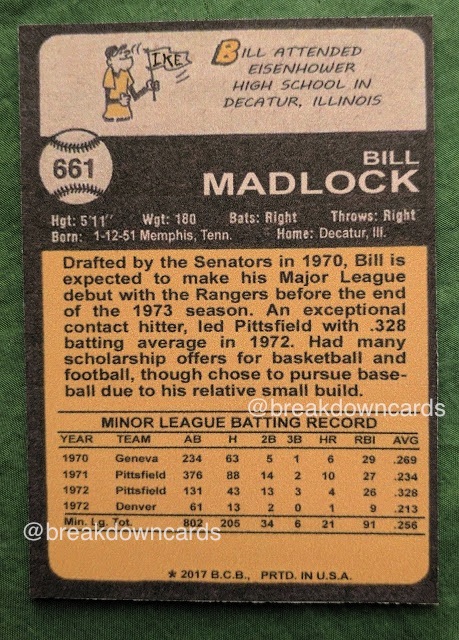 (Sorry about the watermarks. Is it hypocritical of me to bitch about a watermark, then add watermarks myself? Just don't want some thief to try selling copies of my work on eBay.)
Truth be told, I created the front of the Madlock custom over a year ago, but the file sat around on my computer waiting for me to get around to making a back for it so I could print it out. I got around to it recently after the Heartbreaking Cards blog posted that he was starting up a Madlock PC thanks to his Decatur, IL connection. I took that as motivation to finally whip up the back, and even customized the cartoon to be about Decatur. 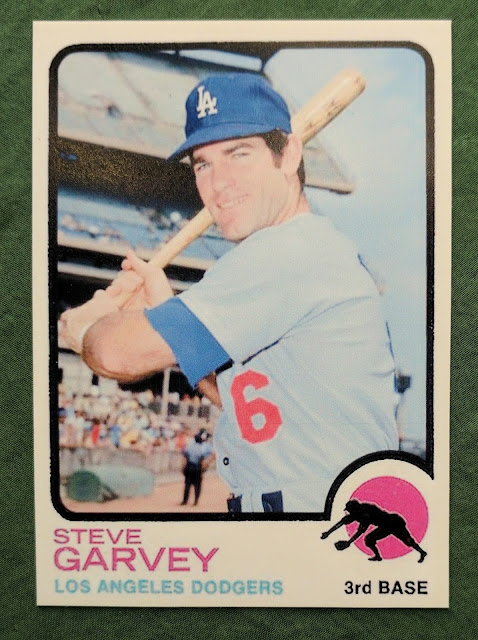 Here's another front that Gio came up with. It's a nice posed alternative to Garvey's messy in-game original 1973 Topps card. 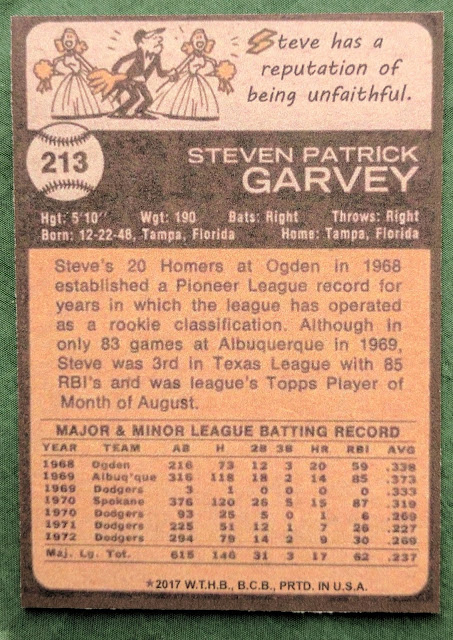 The back is the same as the real card, but with a cheekily edited cartoon. I surprised gcrl (huge Garvey fan) with a copy. Ain't I a stinker? Sorry, man, I just thought it was funny! :) 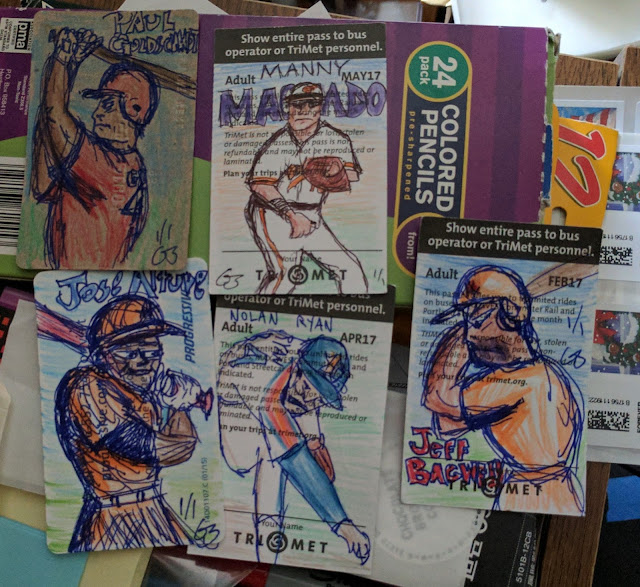 Ok, I'll be the first to admit my strong suit is with the mouse, not the pen, but I still like to crank out a sketchcard from time to time. I never really improve any, but still, I like to keep somewhat active with it. Not sure why this batch is heavy on Astros, just turned out that way. Using "repurposed cards" such as my old bus (train) passes help guide me along a schedule of doing at least one sketch per month. (Just now noticing Manny Machado has the somber distinction of gracing the May 2017 TriMet pass.) 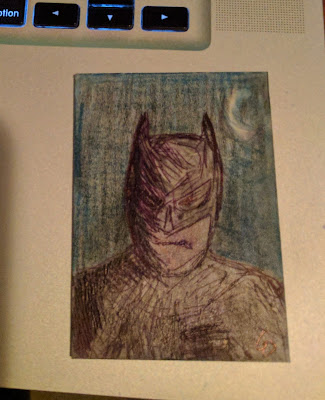 This Batman sketch, a surprise included in a recent PWE for Commishbob might be one of my best in a while, not that that's saying much. The moon glows in the dark.. kinda neat. (UPDATE: RIP Adam West. He was the best.)

So there's some of my recent creative output. Thanks for checking it out!


Contest Update: Ok, let's say the clock is ticking to enter, and I'll officially cut off the entry period for my 1000 Post contest sometime around Saturday morning (6/10).

Thanks to everyone who answered my hypothetical question yesterday. It was pretty unanimous that the right thing to do would be to contact the site and try to swap for the correct card. Interesting!

Let's randomize the folks who responded and award a bonus entry to somebody: 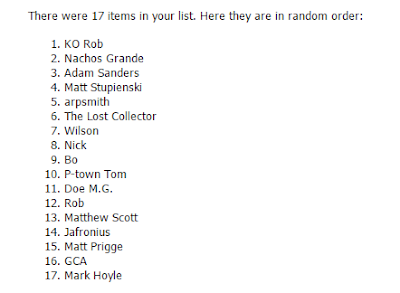 Congrats to KO Rob on the bonus entry!

For the final bonus entry opportunity: The above Paul Goldschmidt sketchcard is done on the back of one of those junk mail fake cards. Be the first to correctly guess which company's card it is in the comments for a bonus entry. (One guess per person. Hint: there are 2 possible correct answers. One's a credit card company, and the other is an airline.) (Update: Jafronius correctly went with American Express. Congrats, man!)