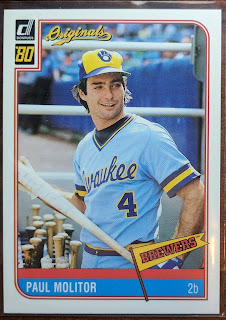 Let's take a look at my Paul Molitor player collection. He's a guy I've liked collecting since my childhood stint in the hobby. He put up some big numbers during his career, and seemed to have a lot of fun playing the game. Maybe not a top tier PC of mine, but I'd like to get him into my Hundred Card Club one of these days, so let's take a look at how close I am. 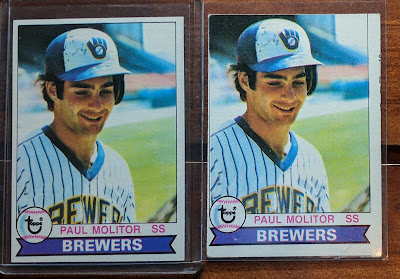 I've got a couple copies of his 1979 Topps card, with one being a neat miscut "variation."

Putting together this post, I've discovered my 1978 Topps RC with which he shares top billing with Alan Trammel is AWOL. I bought it in 2013 in my very first COMC order for seven bucks. Man, I hope it turns up one of these days.. love that card. 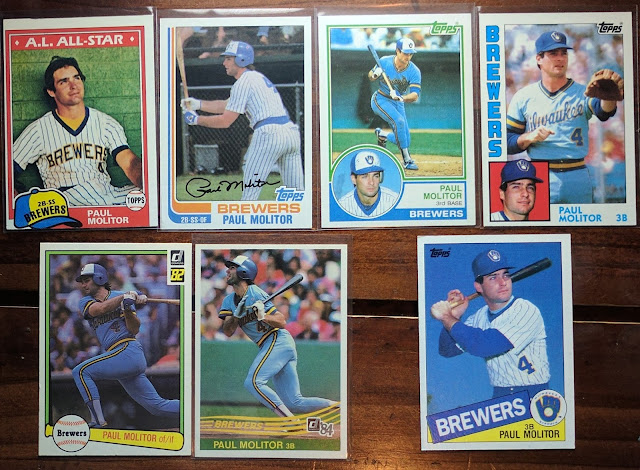 Here's what I've got from the early 80s. Still need his 1980 Topps and several Donruss and Fleer cards. 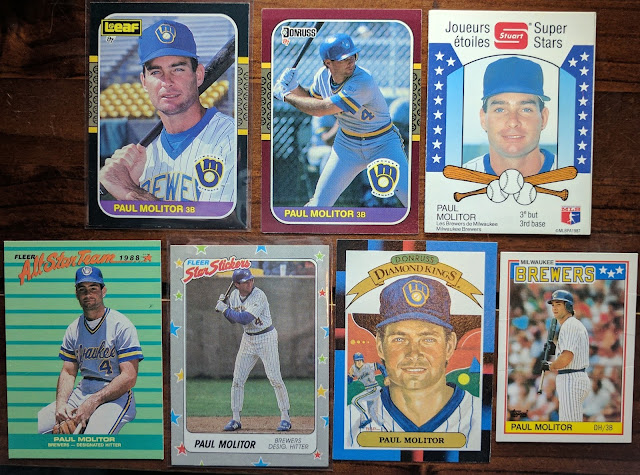 Wow, turns out I've got a lot of mainstream holes in the PC from 1987 and 1988.. and hell, I don't have any 1986 Molitor cards! ..wouldn't have guessed that prior to sorting the PC for this post. The only thing here not somewhat an oddball is the '88 DK. 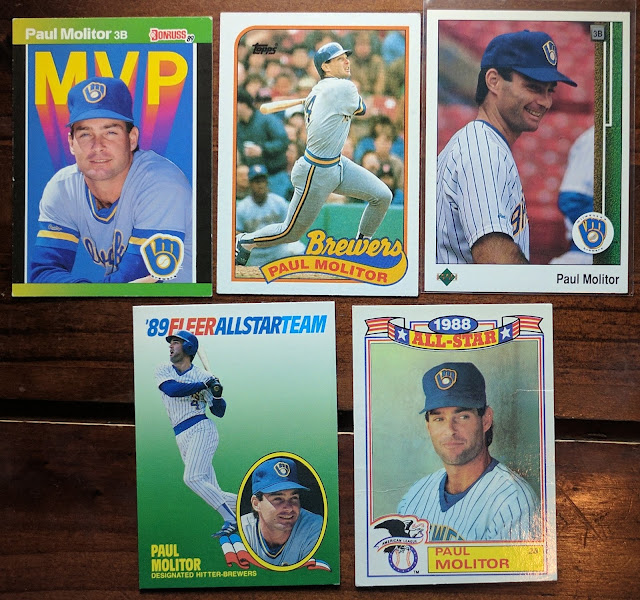 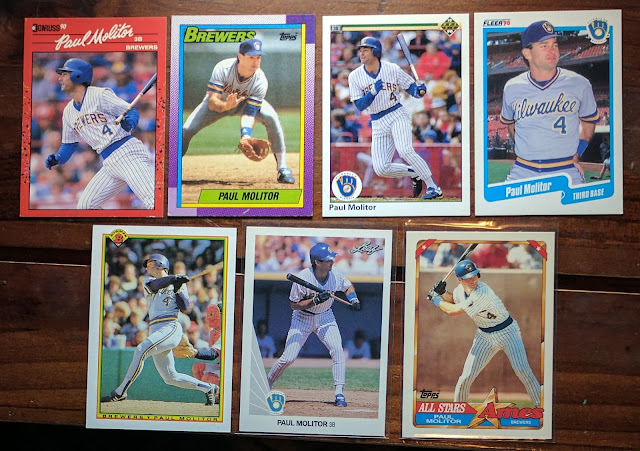 Lots of cards from 1990, with only Score missing from the main sets that year. 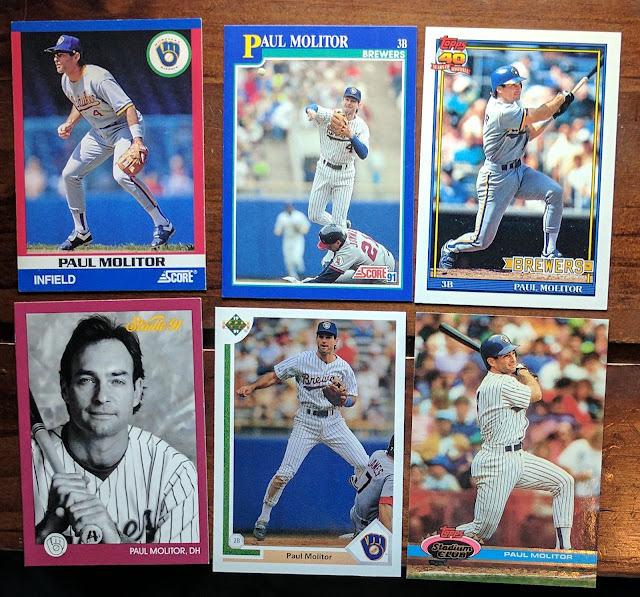 1991. Donruss and Fleer are the notably absent cards here. 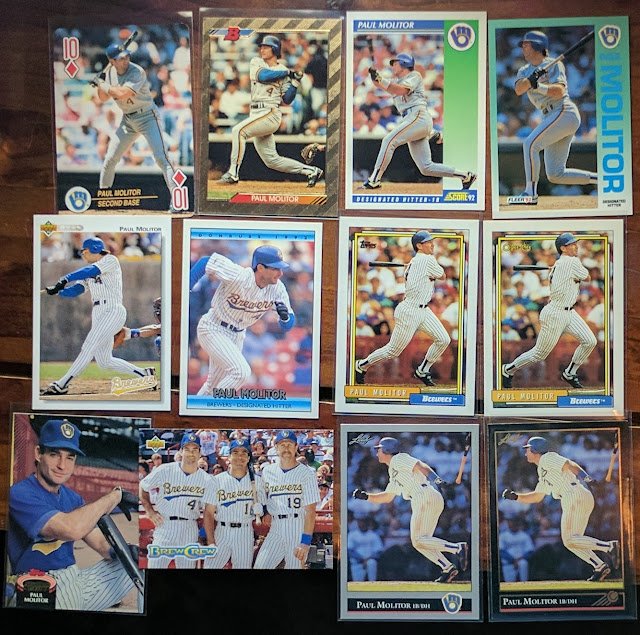 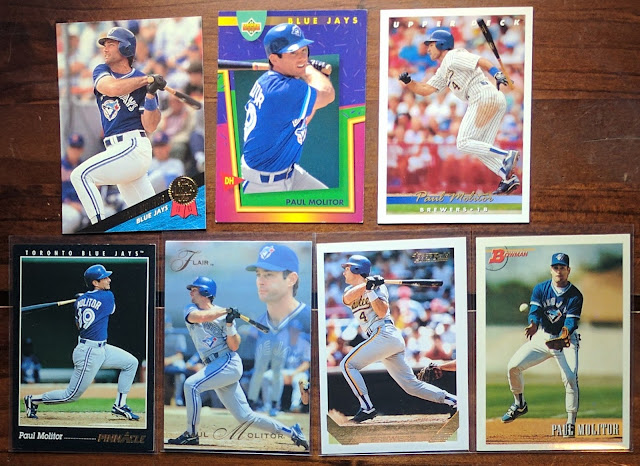 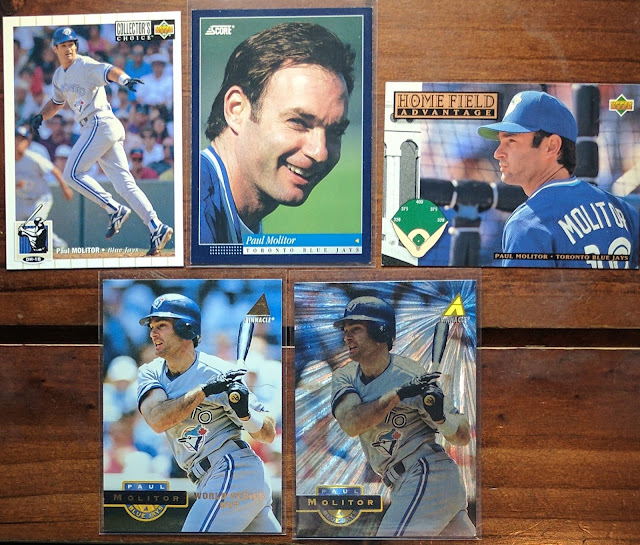 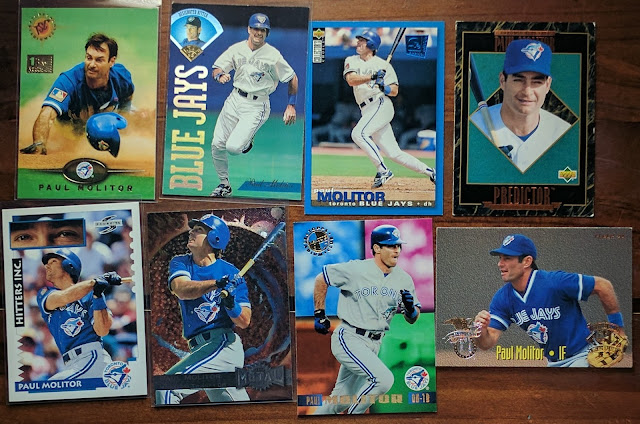 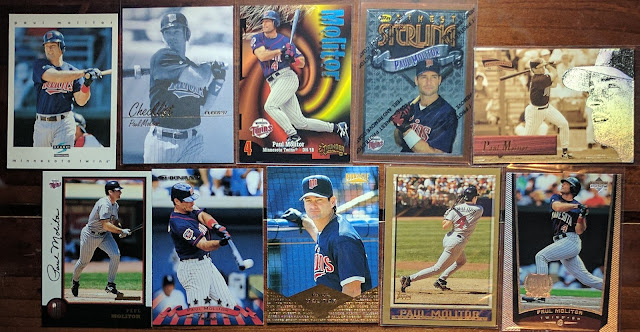 Late '90s (Twins era). Turns out Paul is baseball's all-time leader for most games played while wearing uniform number 4. Wow! Eighteen of his 21 years as a player were spent suiting up as No. 4 (He wore 19 during his time on the Blue Jays... a tribute to his former teammate Robin Yount?). And he's tacking on more years in a #4 jersey as manager of the Twins these days. 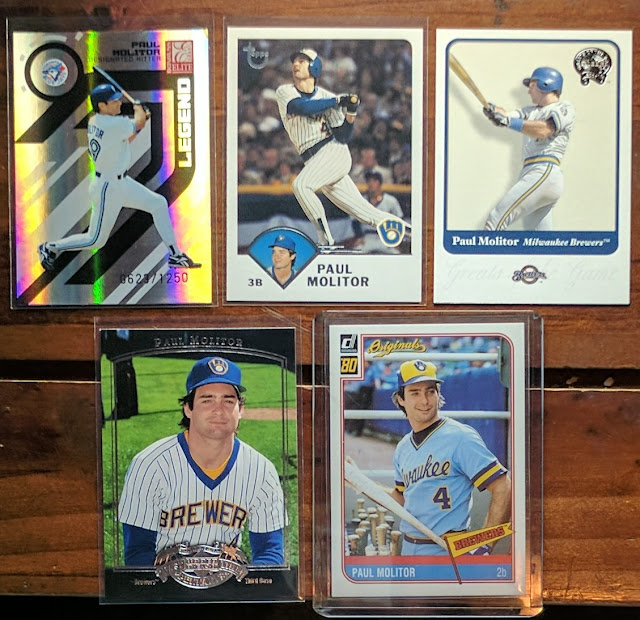 Post-career cards from the decade of the '00s. Luke Appling, Duke Snider, Mel Ott, and Lou Gehrig are a few other big-name ballplayers to wear #4.

Here are my cards of The Ignitor from the current decade. Maybe I've got number 4 on my brain and am posting this PC today, June 15th, because, well.. it's Baseball Card Breakdown's 4th anniversary! Pretty cool, huh? I'm not expecting this post to get all that many hits. If you're reading this, you're probably either a big Paul Molitor fan or just a reader who clicks on pretty much whatever I post, trusting it'll be worth a couple minutes of your time. And I know your time is valuable, so I appreciate that! 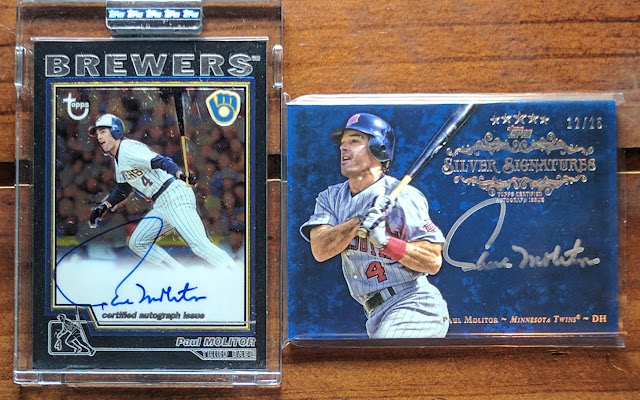 And the hits! Hey, keep it on the downlow, but in celebration of #4, let's quietly round up some readers who want to play a big fun game. If you want to play, leave a comment below with the exact phrase, "Man, that Molitor PC makes me tingly!" Well, ok, it doesn't have to be that exact phrase; you can use a word other than tingly if you want. But the exclamation point is a must. Instant disqualification if there's no exclamation point. Sorry, Jays fans, must have a US address to play due to postage concerns. I don't even have all the goodies sorted out and numbered yet, but there will be some good stuff up for grabs. Update: the cutoff for getting in on this will likely be by the end of today, 6/15. 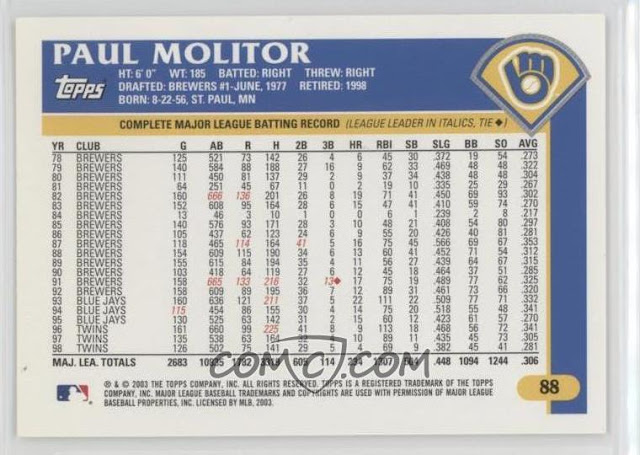 I forgot to snap a shot of a cardback with lifetime stats, so yoinked this one from COMC. Very nice career.

By my count, I've got 93 unique Paul Molitor cards in the PC (plus a couple more floating around somewhere).. pretty close to my goal.
Thanks for reading!
Posted by defgav at 3:22 PM